Start Location: The Chancellor at the Eternal Throne

During Nathaniel's side-quest "The Lost Soul" you will have had to deliver a scroll to the Chancellor at the Eternal Throne. At this point he will have given you this additional side-quest. To get the ball rolling lets head over to The Spine.

To make this challenge a near walk in the park, we strongly recommend you find/buy and equip the following weapons (it'll make you near invincible!):

Baneful Scythes - These scythes will replenish 13% of your health every time you hit an enemy with them . You don't even have to kill them to get this energy back, just hit them! On tougher enemies this is a God send and can make health packs near enough redundant!

Scepter of the Deposed King - Kill the king (see our side missions for instructions and a video on how), and equip this overpowered beast of a weapon. It's slow, but it packs a massive punch with every swing and if your opponent is frozen (likely), hold down the attack button and, after charging, let go to deal thousands of points worth of damage.

Head up to the northwestern path in the Spine and you will find a door. From here, turn around and look to the left to find a Relic of Etu-Goth. Go into the door and follow the wall around to the right as you enter. Destroy the crates here for a Boatman’s Coin. Go to the central part of the northern wall of the room and use the blocks here to climb up and death grip across to a platform up on the other side of the room.

Before hitting the switch, look to the right and shoot the crystal here for a stone of Power. Push the switch in and watch the scene. Drop down and climb up the newly revealed blocks and death grip across to another raised platform on the room’s east. Pull the lever here to have those second set of blocks remain there permanently. Continue through the door on the left. Follow the hallway to the end and through two doors to find yourself in the Soul Arbiter’s Maze.

Move forward to pick up the Soul Arbiter’s Scroll . Return down the stairs and interact with the Mysterious book here to read the rules for the maze and then run up the stairs again to see that there is now a portal on the ground. Hit that to enter.

The Soul Arbiter’s Maze consists of a series of rooms that force players into confrontations with an assortment of enemy types which increase in difficulty the further you proceed. The only way to navigate the maze safely is by finding those pesky Soul Arbiter’s Scrolls and Soul Arbiter’s Sacred Seals that have been hidden across the Nether realms. There are 20 of these to find and if you wish to solve the maze for yourself, you will need to get them all! (You can check out the locations in the collectables part of our guide).

Each room has four exits adorned by the designations N, S, E and W and the directions given to us by the Soul Arbiter direction scrolls give us the path through the maze we require to reach the end.

The maze consists of 10 floors, each of which has two correct paths. One of the paths will lead to a secret area containing treasure and the other will lead to a stairway that descends to a portal allowing access to the next level of the maze.

For your convenience, I have listed the two correct paths through each floor as listed on the scrolls along with notations of importance. 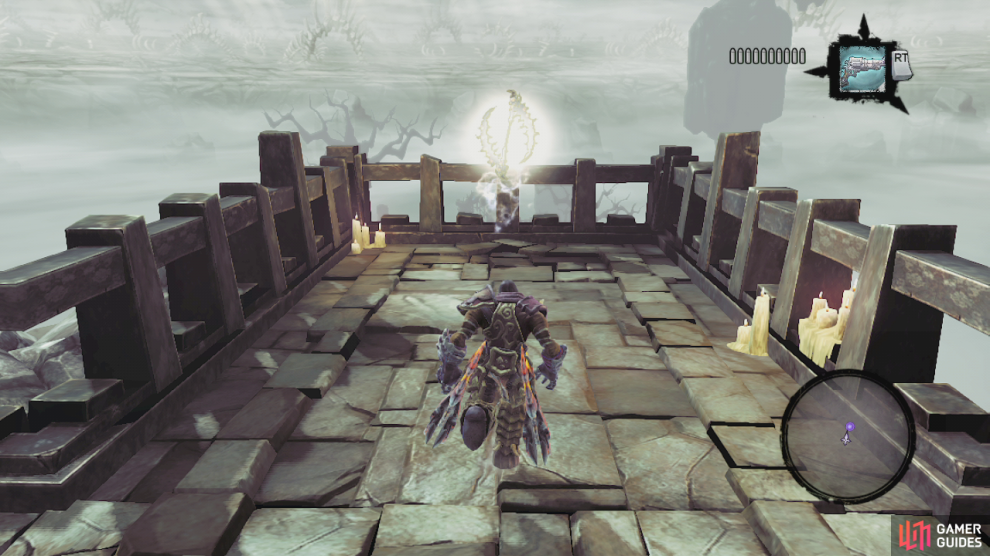 After finishing the 7th floor, be sure to keep your eye out for a shootable Mystic Stone for Blackroot. You will find it in the room at the bottom of the stairs above the portal leading to the 8th floor.

Secret N,S,S,E,N (Find a chest and a portal to floor 8 start)

Secret S,W,E,E,N (Find a chest and a portal to floor 9 start)

Secret N,S,E,W (Find a chest and a portal to floor 10 start)

Once you reach level 11 its time to take on the Soul Arbiter himself.

Video 966 couldn’t be loaded from database.

Side Mission: The Chancellors Quarry

Two Swings – The Soul Arbiter will do a one-two melee attack.

Slam – He will jump into the air and crash down causing an electric shockwave. This is his most dangerous attack.

Summon – The Arbiter will summon various enemies to help him out during the fight.

Barrier - He will put up a blue energy barrier that makes him impervious to damage.

To begin with the Soul Arbiter will try to take you on one-on-on. Simply dodge his two attacks and damage him when safe to do so. After sustaining a little damage, he will put up a blue energy barrier that will make him completely invulnerable to your attacks. At this point he will also summon some skeletal archers to attack you. During this time, the Soul Arbiter will remain motionless – allowing you to fend off the archers unmolested. After taking them down, the Soul Arbiter’s shield will drop and he will resume his attack. Continue damaging him as before until he puts up his shield a second time.

Again he will remain rooted in one spot and allow you to deal with his summons (archers and champions this time) without interference. Again, once they are all dead his shield will drop. Continue attacking him until his shield goes up once more. This time he will attack you with his shield up and also summon an undead general. You must kill the undead general whilst avoiding the Soul Arbiter (not easy!). Once he falls, simply tag the boss a couple more times with your weapons to end the fight.

You will be awarded with two legendary items - Executioner’s Hooks and The Crown of the Dead for your victory. Check out the door on the right and go down the stairs for a chest. Return to the arena and use the portal in the room to the north to exit. Return to the Eternal Throne and talk to the Chancellor to complete the quest

I've Brought You A Gift