Make your way back to where we fought the boss of the Gilded Arena earlier for a scene.

When you regain control of Death, you will immediately find yourself in combat with a pair of undead stalkers. These are much the same as regular stalkers, just with a lot more health. Goody! Killing one of these off will cause a swarm of undead prowlers to join the party, so try and kill these off whilst avoiding the stalker, as you do a third undead stalker will spawn. Kill them all off to open the gate. Cruise up the stairs and into the green door at the top.

As you enter look to the right and climb up the wall on the side of the room here for a chest. Return to the centre and use the summoning circle. Note the two pressure plates. Run to the very opposite end of the room from the door and stand on the square platform here. Facing the door, use your dead lords to activate both pressure plates to send the platform you are on up. Jump off to the next platform and head into the next room.

Kill the scarabs in the immediate area. Use the summoning circle here and get a Dead Lord to activate the pressure plate to the north. This will raise a bridge across the gap in front. Run up to the locked gate here so that you can see the pressure plate beyond and send the second dead lord through to activate it. This will give you access to the next part of this room. Mosey on through and head up the stairs to find a locked skull door. 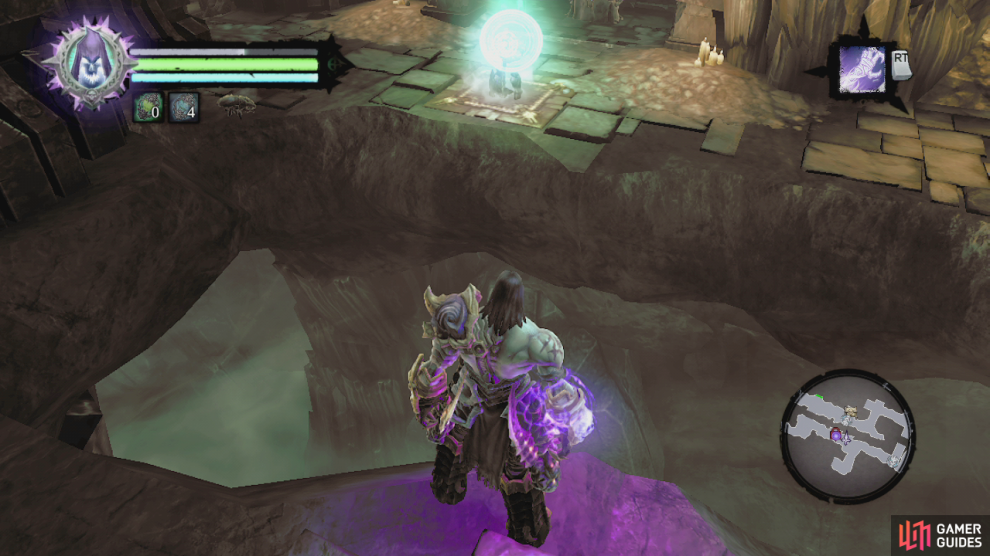 Make your way up the hallway and when you reach the hole at the end drop down to the room below. Open the door here and use the summoning circle to the right.

From here you will see a gated door to the right with a chest behind it and gap in front of you with three switches on the far side. You will need to hit the switches in a certain order or you will have to fight off a wave of skeletal warriors and champions. The order you need to get the Dead Lords to use the switches in is: the middle switch first, then the right switch and then finally the switch on the left. This will lower the treasure chest and open the door so you can grab the skeleton key from within.

Return to the shaft and climb the pole here to return to the skull door room. Upon exiting, look up to see a death grip ring. Use that to climb up to the ledge above for a Relic of Renegoth. Drop back down and from the exit to the shaft we just climbed turn right and follow the hallway to the end to find a locked gate. Look in an alcove to the right for a switch. Hit that to open the gate and move through. Unlock the skull door here.

Upon entering the next room we will see a short scene. Afterwards, kill off the scarabs that are chilling out in front of you and use the summoning circle here. Get the first dead lord to activate the pressure pad here to raise a bridge. Look to the south to see another pressure plate on a ledge across the gap. Once the bridge has been activated, get the second Dead Lord to activate this. This will open a nearby gate.

Cruise inside and when you reach the edge, look down and to the right to see another pressure plate. Get one of the Dead Lords to step on this and then use the handholds here to get around the corner. Jump to the pole, slide down and jump and death grip the Dead Lord to land safely on the platform. Continue into the tunnel beyond. Grab the two chests from the corner here and proceed until you reach a fork. Proceed up the stairs to the right here and you will find a switch to open a gate back to the main room. 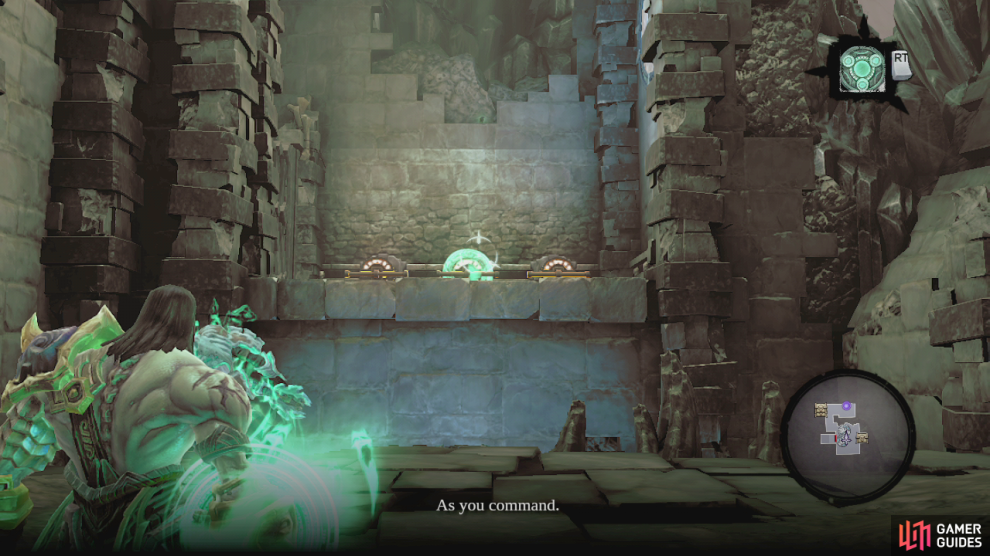 When you reach the main room, quickly use the summoning circle and fight off the skeleton warriors and champions. Once they have bitten the dust, a bone giant will appear. This guy handles exactly the same as the ice giant from the prologue and the bone giant from Judicator’s Tomb. He’s slow moving and has a limited attack set. Let him attack then go in for the kill. Alternatively you can use the summoning circle to have the two dead lords tank him whilst you take pot-shots at him with you pistol and attack when his back is turned. Once he has had enough, two scarab hulks will appear.

This can be pretty tough, so try and get the attention of one of them, whilst your summoned Dead Lords occupy the other. After these two fall, the nearby door will unlock. Move through to the next area.

Look to the left and wall run across to the switch here. This will raise a bridge enabling access back to the start of the dungeon and it will also unlock the door next to you. Enter the door. Follow the hallway to the end and exit into the cave beyond.

As you enter the next area, look above the door you just came from for a Stone of Mystics. Cross the bridge here and kill the scarabs occupying the central area here.Look on the east side of this platform for a Relic of Etu-Goth. Follow the passage all the way to the end and exit into a large open cavern. It’s boss time!

Basileus and Achidna share a health bar and will attack you together and apart. The fight will start with you taking on Basileus one on one. Then he will mount Achidna and you will have to fight her. After taking enough damage, Basileus will jump down to attack and alternate between staying on the ground and riding Achidna.

The fight will start with Basileus on the ground. He will use his teleport slash and slam attacks on you, so dodge these and hit him when you feel it is safe to do so. After taking a few hits a scene will play and he will be sitting atop Achidna.

Whilst he is riding Achidna watch out and when you see the electricity appear around her you will need to prepare to dodge immediately as one of her attacks are coming. Pay special care to avoid the pounce attack as it can do a great deal of damage and can be quite difficult to time the dodge correctly. Keep backing away from her and shooting with the revolver until she does an attack. Dodge this then run in for a few hits and repeat.

Death will pull Basileus off of Achidna once he has taken enough damage and Basileus will now alternate between riding Achidna and taking you on at ground level. There is an additional attack during this phase – the double team. If you see Basileus jump up and hang motionless in the air for a few seconds, get ready to dodge immediately as this indicates that Achidna is about to jump on you. Keep whittling away their collective health bar until a scene plays to finish the fight.

You will earn a new weapon – Achidna’s Fangs as a reward for defeating them.As killing Achidna was one of the side-quests given to you by Thane back in the Forge Lands, you can return to him and hand it in at any time now. 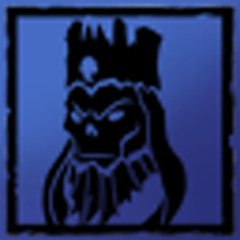 The Court of Bones

Fast travel back to the Eternal Throne and go to chat with the king. The quest Basileus will now be completed. Watch the scene.