Upon completing Shadow of the Samurai, this mission will begin. After a short conversation with Yuna, go ahead and visit your uncle in the main keep. Lord Shimura plans to take the fight to the Mongols, so when you regain control, you will need to head to the stables to get your horse ready. Before that, you can optionally speak with your allies once more. They are all in the area right outside of the keep, although you don’t really get anything for speaking with them, other than a continuation of their personal missions.

When you’re ready to continue, head to the lower area of Castle Kaneda, where the stables are located. Speak with Yuna for some dialog, then mount your horse to get ready for Lord Shimura. The gates will open and you will be following him for a short while, so listen to the conversation on the way. Once you get out of the forest, you will find a farm that has been burned to the ground. A little further ahead, there will be a Mongol patrol, so Lord Shimura decides to attack it. You will be fighting a mix of yellow-tiered and blue-tiered enemies here. Once you take them all out, get back on your horse and continue following Lord Shimura. 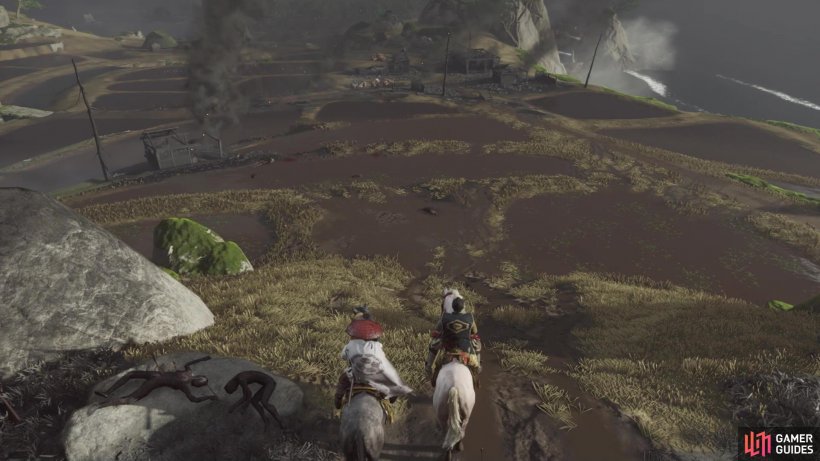 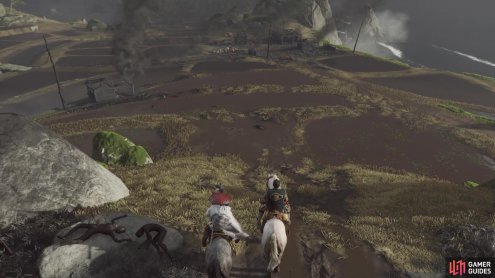 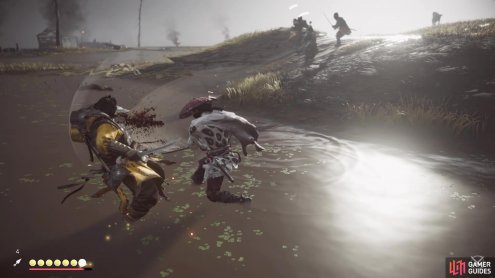 Lord Shimura goes after the Mongol patrol in the distance (left), You will be fighting harder variants of enemies as you go on (right)

You two will be going after the lighthouse, to rekindle it and show that there is still hope left for Tsushima. As you approach the front gate of Fort Ito, some archers will be waiting for you, so dismount and try to take them out quickly. Soon after, the front gate will open, revealing more archers, some dogs and a brute with an axe. Not long after you begin fighting them, some more enemies will be joining the fray, including some swordsmen and spearmen. Continue into the fort after defeating those enemies to have some more to battle. Clear that wave, then start moving towards the alarm.

Of course, the alarm is being guarded by more Mongols, one of which is a yellow-tiered enemy that shoots a firearm at you, if you let him. If you’re hit with one of these shots, you will also be set on fire, so either try to take him out first or wait until he’s the final enemy. Luckily, the range is pretty short on this, but the blast might be deceptively larger than it looks. There will also be an archer in the tower, so be wary of being shot from a distance. Clear out all of the Mongols, then run to the front gate to see Yuna has arrived, with a warning that more Mongols are approaching. 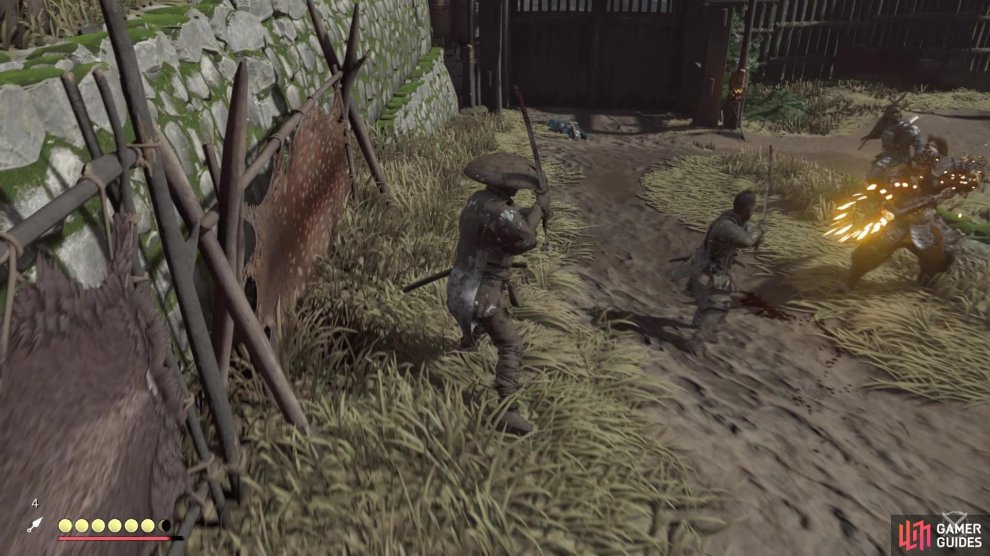 Thankfully, they arrive with a cart that Yuna shoots, putting a big dent in this final wave. Clean up any remaining Mongols, then approach Yuna for a quick scene. There will be one final thing to do in this mission, which is to rekindle the flame at the top of the lighthouse. Run to the lighthouse for a quick scene, then climb to the top and light it. It seems like the mission is over, but a woman runs up to you back at the bottom to tell you about a warrior monk that was held prisoner at the fort.

Find the warrior monk inside the fort and speak to him. His name is Norio and he will show you where he was held prisoner. With him in tow, make your way to the northern gate. There, another scene will take place, leading to the end of the mission.