It is finally time to tackle another main story mission, with this one being south of the Logging Base. When you approach the marker, you will see a few houses, so head inside the one with Yuna to automatically begin The Broken Blacksmith. Yuna has a plan on getting inside of Azamo Bay, using Kenji and his wily ways. When you gain control, you will have to wait until Kenji gets his cart ready, so just hang out until everyone starts moving. As you will see from one of the objectives, you cannot draw any unwanted attention to yourself, which will mostly extend to the rest of the mission.

Not long after you begin moving, you will run into some Mongols on the trail, but instead of fighting them, you will have to get into Kenji’s cart. Do that, then watch as you eventually reach the inside of Azamo Bay. Once out of the cart, follow Yuna behind some rocks and to the roof of one of the buildings, where you will be asked to survey the area. Focus on the one Mongol, who happens to be a slaver, as he inspects some of the “merchandise.” Sticking to the rooftops will be the ideal thing to do here during this part, as you can stay out of sight better and don’t want to raise an alarm. 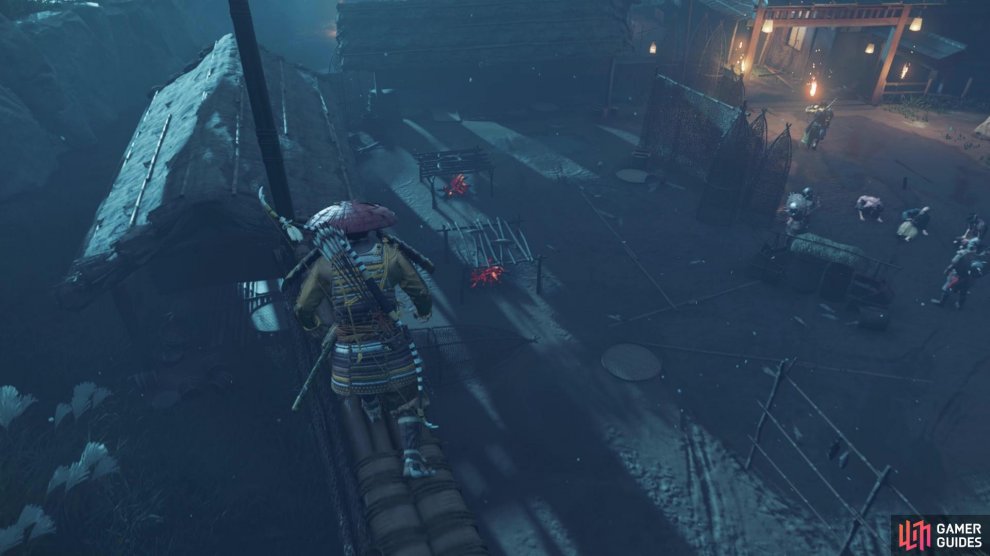 From the initial rooftop, while facing where the slaver is located, you can jump to the left and grab onto a structure. That will allow you to stay above the Mongols and on the rooftops. Don’t forget that you do kind of need to keep the slaver in your sights, too, so keep using Focused Hearing to keep track of his location, which also helps in determining the locations of other enemies. Whenever the slaver stops, cross over to the next set of rooftops and continue following him until you overhear a conversation about another blacksmith. The slaver will move through the market now, but it’s packed with Mongols, so you will have to find a way to get through it without causing a ruckus.

Passing Through the Market

Finding a path through the market is going to be a little tricky, especially with the one objective to not raise an alarm existing. However, that doesn’t mean you can’t kill any Mongols; it’s just that you have to be silent about it. On the one side of the town, along the wall, there should be a lone Mongol next to one of the captives, with another Mongol a little further ahead. Drop down to the ground and take these two Mongols out, then move a little further ahead to assassinate that is likely leaning against something. The goal beyond that is the building, where a Mongol is leaning over someone. 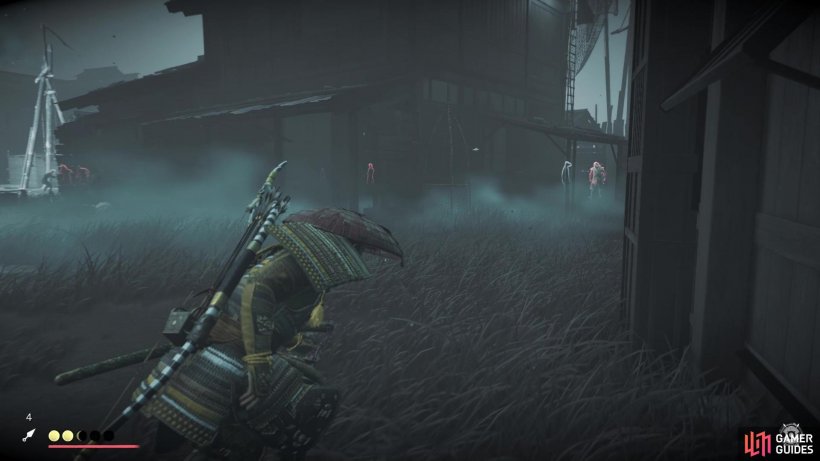 (1 of 2) Head over to the side of the town, where you can assassinate some Mongols 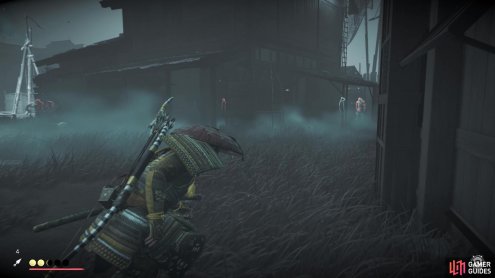 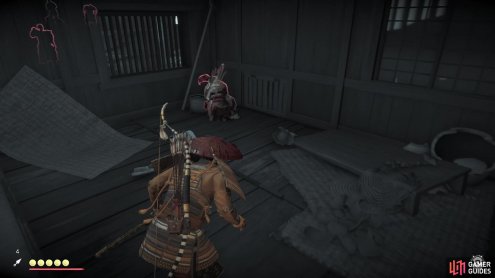 Head over to the side of the town, where you can assassinate some Mongols (left), Take out this Mongol, then sneak through the opening next to him to get through the market (right)

Take this enemy out via assassination, then it looks like you’ll be stuck, as another Mongol moves up and blocks the path on the side of the house. However, open the only door and kill the Mongol in the adjacent building, then look for the trap door on the side, putting you back outside and fulfilling the market objective. This prompts the slaver to continue his movements, so resume your stalking and it won’t be long now until he brings you to Yuna’s brother, Taka. A cutscene will take place, with Taka being rescued, moving this mission to the next part, the escape from Azamo Bay.

Follow Yuna and Taka for now, then climb the crates to make it over the northern gate. You are now out of harm’s way from the Mongols inside of the town, so you can freely run if you want. However, as you move down the road, you will see some Mongols running towards Azamo Bay, so quickly take cover in the pampas grass and wait until the road is clear. Your goal is to reunite with Kenji here, who is north of the town, so start making your way towards him. It’s best to avoid all confrontations with Mongols here, so keep using Focused Hearing to see if any are close. Upon getting to the marker, hide in the grass there then get on your horse. The game will take over at this point, pretty much, so just ride with your allies, bringing the mission to a close.

You’ve finally rescued Yuna’s brother, Taka, from Azamo Bay, but the town is still under control of the Mongols. Completing The Broken Blacksmith does open up a new Side Tale right outside of Azamo Bay, but it also unlocks a new Mythic Tale back at Hiyoshi Springs. The important thing about The Curse of Uchitsune is that it unlocks the Longbow weapon for Jin, which is a much stronger bow, despite it being a bit slower than the Half Bow. This will allow him to headshot enemies with helmets on, so it’ll be extremely crucial going forward, so make sure you visit Hiyoshi Springs to complete this Mythic Tale.

The next target is the Side Tale right outside of Azamo Bay, but there is one collectible nearby that you should grab first. There is a small graveyard just north of the icon for the Side Tale, where you will find a Singing Cricket. With that out of the way, go ahead and complete the Side Tale, Unfinished Business, which will liberate Azamo Bay finally. That will unlock another Side Tale, Honor Buried Deep, so go ahead and do that now.

There are three Records in Azamo Bay, which aren’t too difficult to find. Stolen Memories Record can be found on the second floor of a building in the northwest portion of town. Meet Us In Umugi Cove Record is found towards the southeastern portion of the town, on the second floor of a building. Skills For Trade Record can be found inside the dojo-like building, right by where you had the duel in Unfinished Business. There is a Bamboo Strike in the courtyard area of the same building as the previous Record. The Fox’s Den is found right by the same building, up a small flight of stairs slightly west. That wraps up all of the goodies found in Azamo Bay, so let’s continue onto the next main mission.