Lady Masako’s icon is located to the east of the Golden Temple, so make sure you’re tracking it. Other than some terrain, there’s nothing else to do on the way, so it shouldn’t take too long to get there. Upon getting to the Adachi Estate, you will notice that no one is there. Eventually, you will be told to search the guest house, so approach the door and some enemies will bust through the door to attack you. It’s nothing but three sword users, so they shouldn’t pose any challenge at all. Once you cut them down, search one of their bodies to find nothing at all. 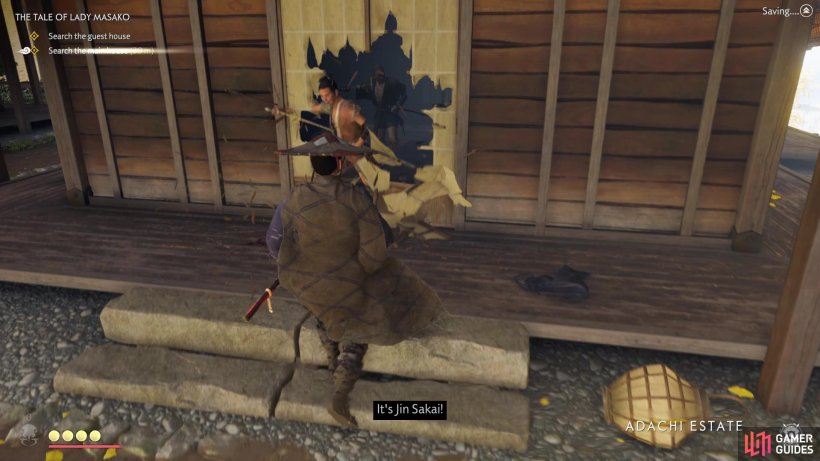 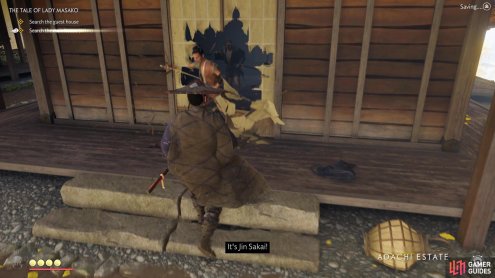 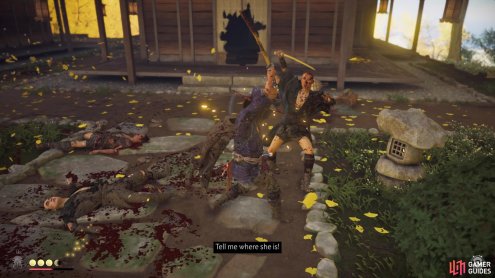 Approach the guest house to get ambushed by some enemies (left), You should have no trouble cutting them down (right)

Feel free to look around for any materials, but when you’re ready to continue, go inside the main house to see some clues you can examine. There’s two inside the house, then you’ll have to check the stables next, where there are no horses. You can find something to examine in front of the stables, then some footprints near the main gate. Follow the footprints out of the Adachi Estate, along the trail. Eventually, you will come upon a dead horse and while checking it out, a cutscene will occur and you will be introduced to Lady Masako. When the scene is over, you will be following Lady Masako.

While following Lady Masako, you will stop at a cemetery and have to pay respects to her fallen family. From there, you will be heading to the Golden Temple, so continue following her until you arrive. She stays outside of the temple grounds and asks you to do two things. The first is to find a monk named Sogen and report the fate of Clan Adachi, then she wants you to find the armorer. Head through the gate and not far in, someone named Junshin will yell your name. He is the head of the temple and wearing a white robe, so stop and speak with him to learn the whereabouts of the monk named Sogen. 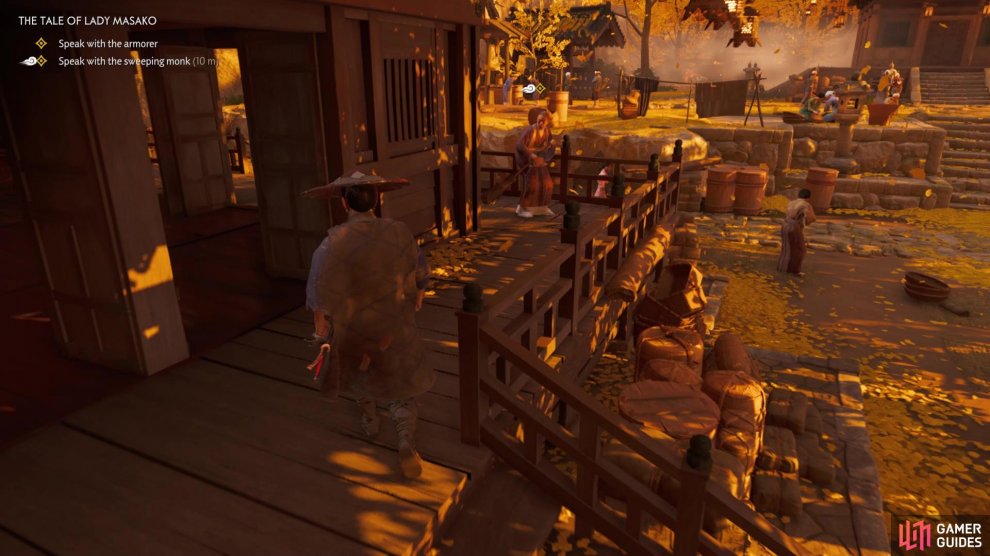 Sogen will be sweeping the floor of the temple

He mentions that Sogen is sweeping, and he just so happens to be on the temple deck to your left. Head to him to talk, mentioning Lady Masako and after a brief conversation, you can go your merry way. Check in with the armorer now to receive the Samurai Clan Armor, a new piece of equipment you can wear. This armor is actually built for battle, as it increases Jin’s health, allows him to less damage and any damage he does receive will give him some Resolve. Basically, when you know you’re going to be fighting enemies head-on, it’s best to equip this. As with the Traveler’s Attire, you can also upgrade the Samurai Clan Armor, boosting the passive skills on it.

When you’re done browsing and looking at things, meet up with Lady Masako again, who is outside of the gate near the armorer. Speak with Masako to make her move again, then follow her to a ledge overlooking the temple. Survey the land and focus on Sogen, who seems to be in a hurry to leave. You will need to trail Sogen at this point and not be seen at all. He will stop at a few points on a few occasions, once at the end of the initial path and the other time when some deer run by him. There’s plenty of cover strewn about to make sure he doesn’t see you. There’s not much left after he crosses the bridge, with Sogen ending up at some old inn. 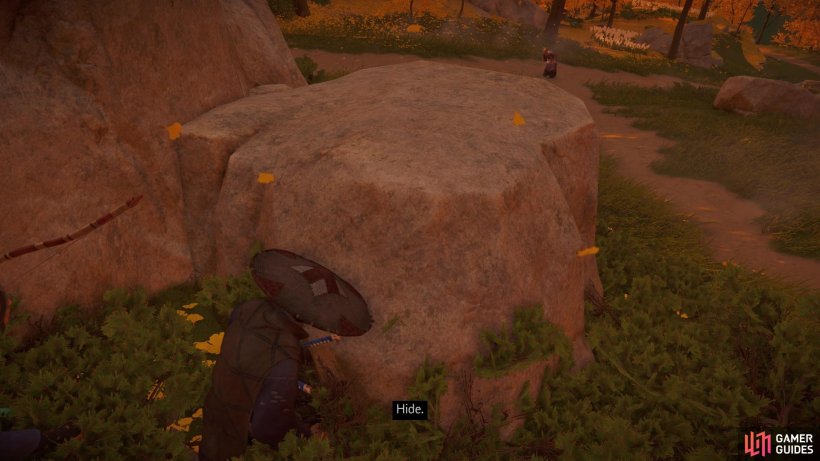 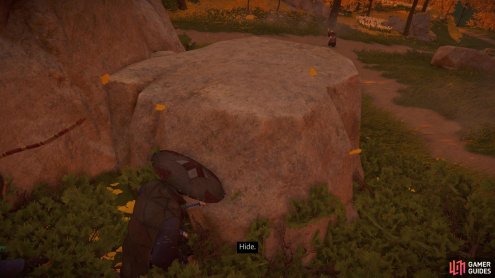 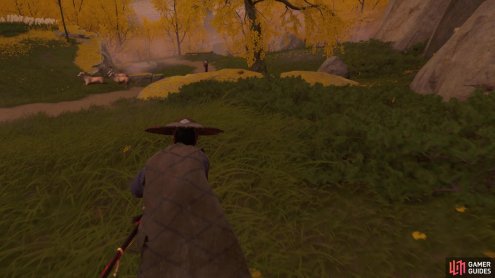 Sogen will only look back a few times (left), such as when the deer run by him (right)

Go to the left side of the entrance to eavesdrop, then it will be time for a battle. You will start out in a Standoff, but there are a good number of enemies here, so it will devolve into a straight up fight. It’s mostly swordsmen and a few spearmen here, so be careful in getting ganged up on, especially when playing on harder difficulties. When you’ve downed all the enemies, follow Masako up the ladder and to the second floor, where you’ll be confronting Sogen. You can explore the place after that scene is finished, but to continue, you have to explore and examine the one room on the second floor. The only thing you really need to look at is the paper on the table, which has a list of conspirators. Bring this list to Masako to put an end to the mission.

As with Sensei Ishikawa and his missions, completing the first one for Lady Masako will open up another. This one starts at the Golden Temple, so head there and do The Headman next. Upon finishing this mission, you will be in an area where gathering a few more collectibles is ideal. You should be just south of the Winding Trail area on the map, so look at the map and place a pin at the black dots just to the left of Winding Trail. This should be a place where some refugees are located and one of them should have a rumor about a Side Tale for Lady Masako up in the northwest corner of Izuhara.

Back on the map, locate the “D” in Winding Trail and go straight north of it. You will be lead to the Mountain View Hot Spring, so take a dip to increase your maximum health. To the east of that Hot Spring is the Golden Summit Shrine, and the path that begins the ascent to it is on the northern side. Look for the torii gate, as is the case of all the Shinto Shrines. The path up to the actual shrine will have you use various logs and pieces of wood to get across the broken bridges, as well as having you squeeze under/through the terrain. When you get to the final broken bridge, you have to drop down to some rocky platforms to get around it. 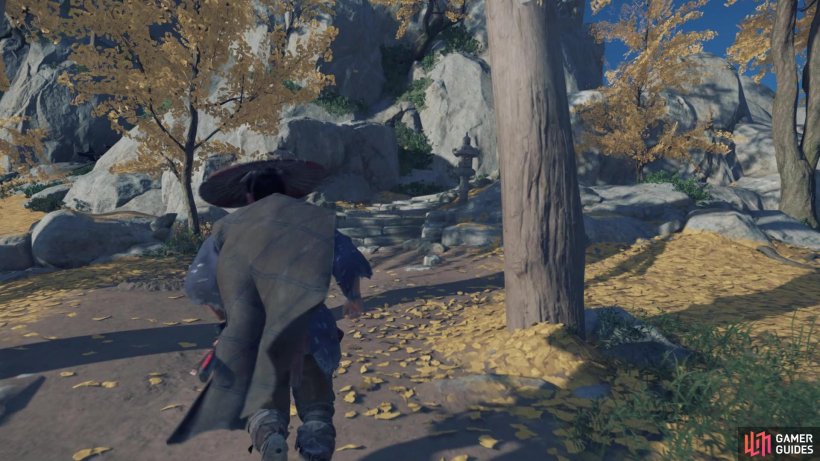 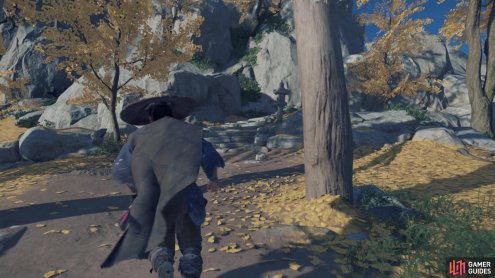 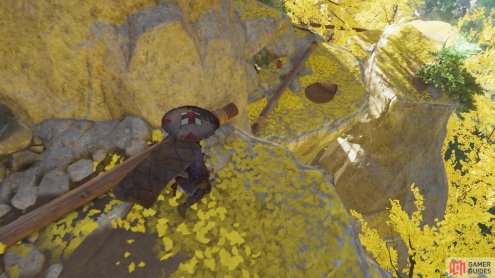 The torii gate with the stone stairs is where you will begin your way to the shrine (left), You’ll have to jump down to continue to the shrine (right)

Note: Your reward for doing the Golden Summit Shrine is the Charm of Amaterasu, which allows you to get a moderate amount of health back after killing enemies.

The next two things on the agenda will be Sashimono Banners. If you went down from the previous Shinto Shrine using the “Descend” option, then head straight west from where you gain control. Basically, you’re looking for some refugees camping out in a spot, as that is where the Sashimono Banner will be located. From there, head northeast and look for footholds to get to the top of the large rock formation. When you reach the top, there should be another, smaller, rock formation that is the summit of this section. The second Sashimono Banner will be located at the base of this smaller formation. West of the second banner, near where the path and stream converge on the map, will be another Fox’s Den.

For the final item of the exploration tour right now, fast travel back to the Golden Summit Shrine and then head east. You’re looking for a cemetery, which will be in between the two streams on your map, and will be southwest of the Adachi Estate. When you find it, fight off any enemies present there, then go looking for the Singing Cricket. Note that you can use your Focused Hearing to see the location of the Singing Cricket. There is also a Hidden Altar at this graveyard. That’s it for the collectibles, so let’s go ahead and finish the Side Tales for Lady Masako. There will be two more left, with the first being back at Adachi Estate, titled The Husband. Complete that one and there will be one final Side Tale here, called The Traitor, which will be located at the Survivor Camp northeast of Adachi Estate.