You have the world to explore and there’s plenty of things to do on the map, including a number of Tales. In fact, you have three Tales left for Ishikawa, which are as follows:

You can do them now, if you want, which can be a good idea, as you gain access to Fire Arrows during the final one. With that over with, it’s a good idea to probably start heading south now, but there’s one thing that might be nagging at the back of your mind, which is the Swordsmith and Armorer mentioned previously. Well, they are located at the Golden Temple, which is south of Hiyoshi, so let’s start heading there and do some more open-world stuff along the way.

Southeast of Ogawa Dojo, you should have a long bridge that extends over a river. As you approach that bridge, you will see a man yelling at someone on the bridge, so speak with this man to begin a side tale, titled Incident at Hiyoshi Pass. When you’ve cleared that side Tale, it’s time to continue with the gathering of the collectibles. After crossing the bridge where you did the side Tale, follow the shoreline to the east and you will eventually run across a Fox’s Den. Let it lead you to the Inari Shrine, then return to the fox den. 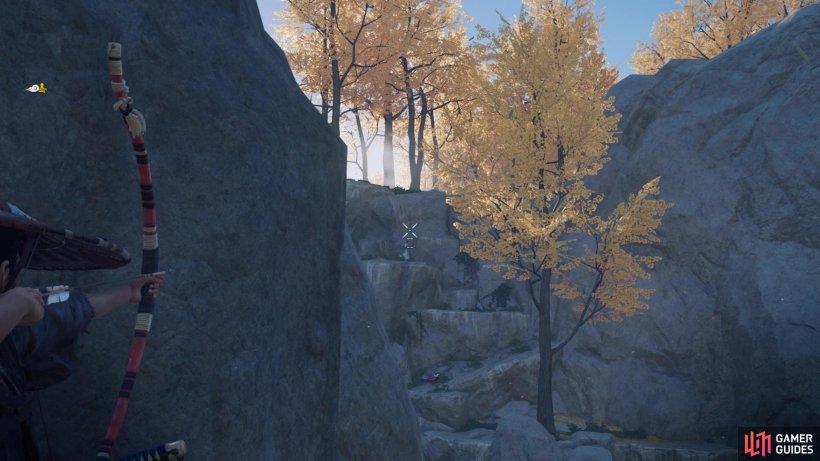 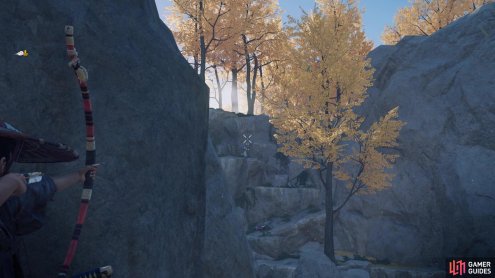 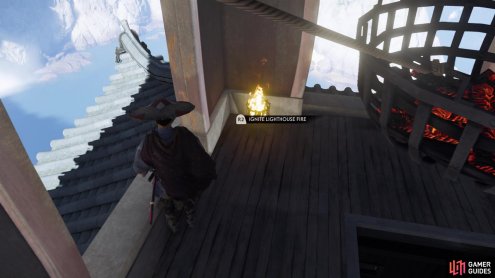 There are a lot of archers during Incident at Hiyoshi Pass (left), Approach the fire to get the prompt to light the lighthouse (right)

Facing east, you should spot a tall building off in the distance a little bit. This is a Lighthouse and it’s one of the collectibles in the game. To make it count, you will have to climb to the top, using the ladders inside, and use the fire off to the side to light it. There’s another thing on top of the Lighthouse, but you can’t get it right now. Return to the base of the Lighthouse and begin venturing to the south. It shouldn’t take very long for you to happen upon another Survivor Camp. While there’s nothing here to do right now, other than check the Merchant and Trapper maybe, it functions as a fast travel spot and will be useful in a little bit.

Note: There is a scroll sitting there at the Survivor Camp, titled A Family’s Escape. This goes into your key items and is part of a hidden quest that has no markers at all on the map. 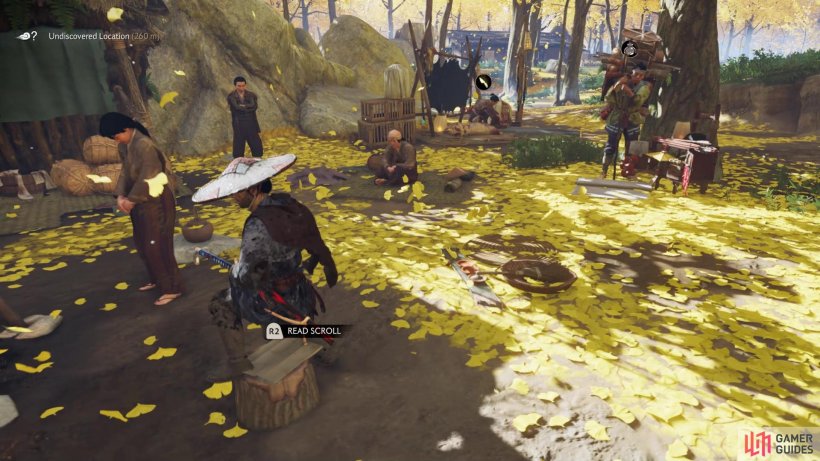 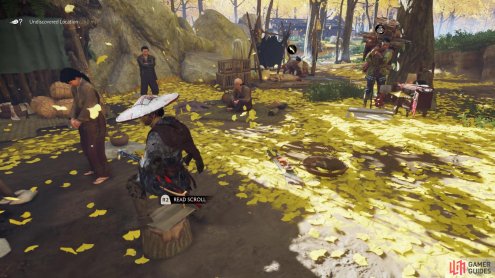 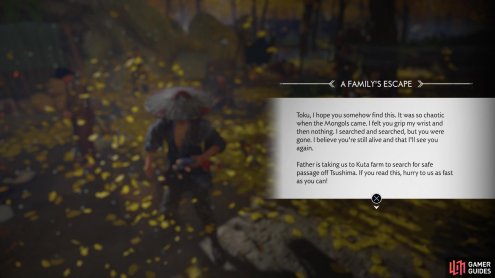 The scroll at the Survivor Camp starts a hidden quest (left), The contents of the scroll will lead you to the next location (right)

Just southeast of the Survivor Camp will be another Fox’s Den, so follow your furry friend as it leads you to another Inari Shrine. A little northwest from the Survivor Camp is a small camp, where you might see some Mongols, but there isn’t anything here, so you can ignore it completely. For now, though, from the Survivor Camp, you want to head straight west. It’ll be kind of easy to spot the Fox’s Den, as it is in the middle of an open field-like area. Once you get the Inari Shrine, return to the Fox’s Den and continue west until you are on a path. Follow this path west-northwest, until you see a cemetery. Dispatch any Mongols, then head for the upper portion of the cemetery, where you will find a Singing Cricket on a bench, in front of a tree.

You’re getting close to the Golden Temple, so from the Singing Cricket, venture straight south now. If you come to another road, then follow it until you spot a wooden gate on your right. This will be the Golden Temple, but there’s one more thing to grab before you go inside. Just a tiny bit more south, look to your left to see some footholds on the rocks. Climb to the top and find the opening at the summit to uncover the Golden Leaf Hot Spring. Rest there to get another increase to your maximum health, then backtrack to that gate from before to arrive at the Golden Temple.

The Golden Temple is definitely the biggest civilian hub you’ve seen thus far, and it houses a few services that you haven’t had up to this point in the game. There is a very large tree on the northern side, with someone out front with whom you can speak. The large tree has an altar on it, where gifts will appear as you progress through the game. Basically, as you fight the Mongols, taking over their territories and complete Tales, you will unlock more gifts. Thankfully, the game will notify you whenever a new gift has been offered, so don’t forget to return to the altar to retrieve it. 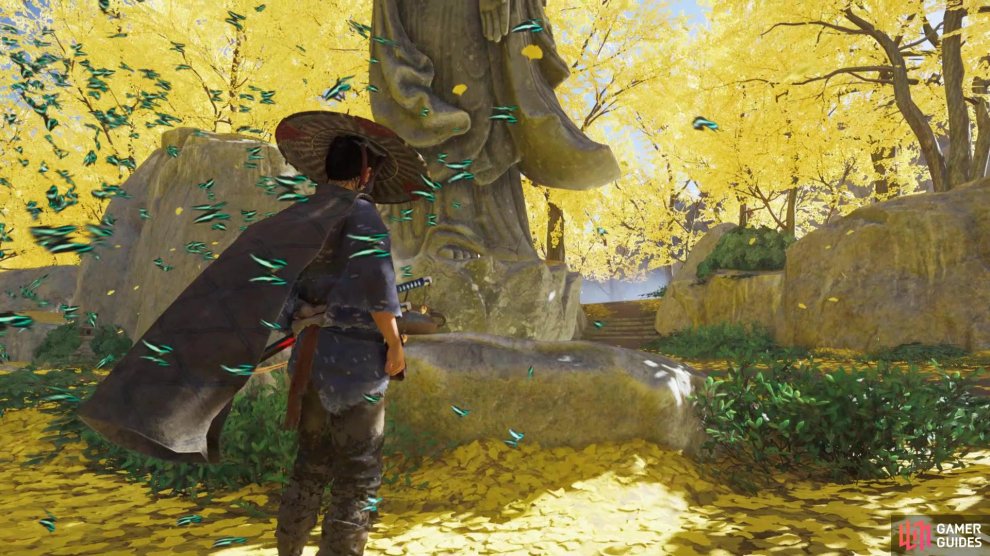 The statue at the Golden Temple is actually a Hidden Altar

You should seek out the Swordsmith and Armorer next, as you might be able to upgrade things. If you only have enough materials to upgrade one of your weapons, pick the one that you use more. Should you do more stealth-based gameplay, the Tanto might be better option, while the Katana is the more logical choice for straight-up combat. There is also a Bowyer here, so if you want to upgrade your bow, then it’s possible. Before moving on to Lady Masako next, there is one final thing to do. Just west of the gift altar is a statue on a hill. This statue is actually a secret Hidden Altar, as bowing in front of it will produce a special effect. It’s finally time to move on to recruiting Lady Masako.