You will find this main mission in Umugi Cove and as you’re exploring it, the mission will automatically begin whenever a Straw Hat stops you. You tell him you’re a samurai and he mentions that Lady Sanjo will want to see you. Follow the guard into the one building, then up the ladder to meet this Lady Sanjo. You tell her that you’re looking for a smuggler named Goro, who she mentions is downstairs drinking. Go downstairs and speak with Goro, who agrees to help you to repay his debt to Lord Shimura. Follow Goro back to his house, where he will hand over a map leading to his hidden smuggling boat. 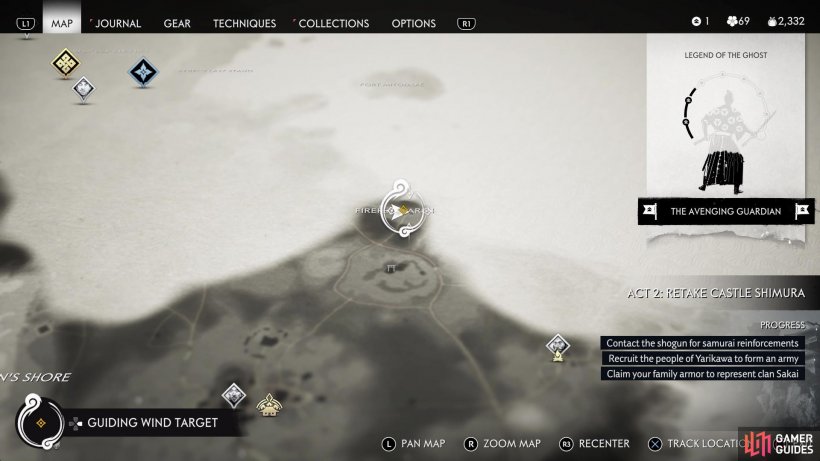 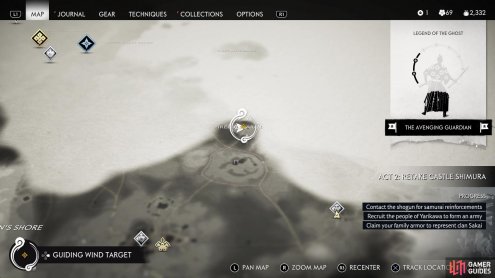 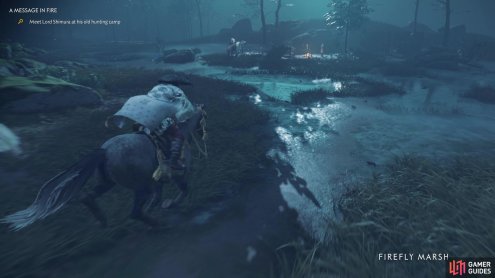 Before you can leave, you hear that Goro has a few visitors in the form of some ronin. Confront the ronin by going to the door, who will go away when they see you. That was a minor distraction, but it’s time to get back on track, as you need to meet up with Lord Shimura. He is at a camp in Firefly Marsh, which is located northeast from Akashima Village and north of the Marsh Rock Shrine. Speak with Lord Shimura, then follow him as you meet up with Goro. Eventually, you will make plans to distract the Mongols by going after Fort Mitodake, while Goro tries to sneak by the Mongols on his own ship.

Follow Lord Shimura, on foot, to a spot where you will ambush a Mongol patrol. Since Shimura likes honor and all that stuff, you will have to do battle with them head-on, with there being a mix of blue-tiered and yellow-tiered Mongols. When you hear Lord Shimura talking about moving forward, some more Mongols will appear near the fort’s entrance, consisting of a few archers and swordsmen. As usual, the archers should go first, but if you advance too much towards the actual fort, some more Mongols might come out to play. As you step foot in the actual fort, you will be fired upon by archers

So, it might be better to focus on the other enemies first, then maybe snipe the archers from a distance. The third wave is more of the same, as well as an axe-wielding brute. Note that Lord Shimura can go down, so you will need to revive him before the timer expires. Once the outside is cleared, head to the front gate with Shimura to help him open it. It seems all is calmed, until you’re suddenly attacked by archers, so quickly take cover behind something. Ignore the archers and move up ahead with Lord Shimura, where he will open the next door. Move up the path to fight some more Mongols, then approach the building to fight even more, including some dogs.

There will be a path on the side of the building, leading deeper into the fort area, along with more Mongols. Right after that, you will witness a short scene of the Mongols shooting a hwacha at you, which is basically a lot of arrows. Whenever you see a white circle on the ground, you want to get out of that, as that is where the hwacha will be shooting. Of course, doing that can be a little tricky as you’re fighting other Mongols, so always keep an eye open for the circle. Keep fighting through the Mongols and after the two wooden bridges, you will finally be at the tower with the hwacha. Take out the Mongols at the top, then it will finally be yours. 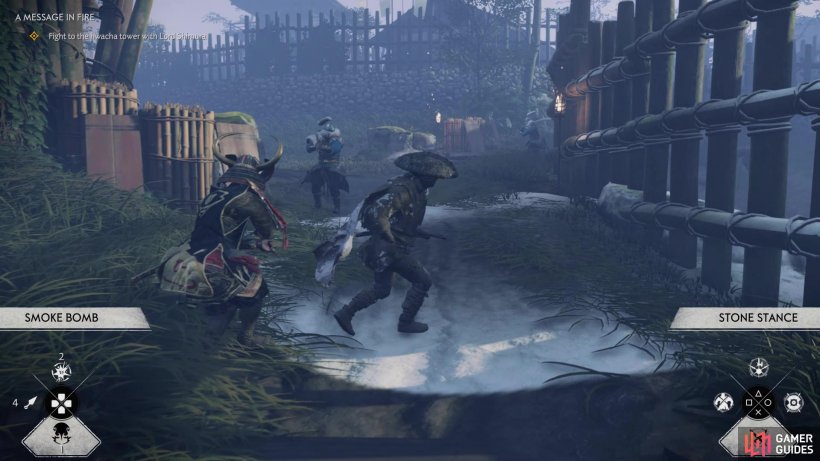 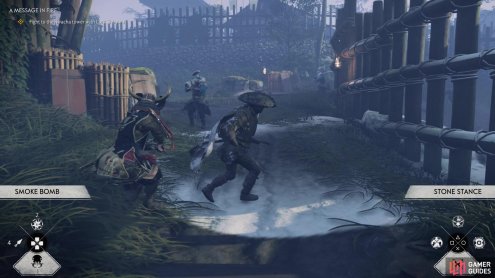 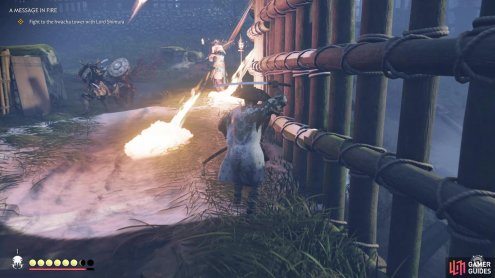 Keep an eye out for the white circle on the ground (left), as that is where the enemy hwacha will be firing (right)

It appears you bought enough time for Goro to do his thing, but the Mongols have noticed him and will be going after him. Thankfully, you will be able to use the hwacha yourself to fire upon the Mongol vessels. All you do is aim the hwacha, represented by a white line, at the enemy ships and fire with the R2 button. Note that you fire all of the arrows, so there will be a brief moment in between volleys where you can’t fire. Try to aim a little under or over in order to hit the ships. After the first wave, you need to aim at the shore straight ahead, as archers will fire from there. After that, you will need to start hitting the larger ships, which should take two volleys to down. Keep this up and Goro will finally break free, finishing this mission.