You will have to travel to Omi Village in order to begin this mission. Upon reaching Omi Village, you will need to head straight for the Sakai Estate, which is the larger than normal house situated on the hill. Once you find it, go inside and you will witness a cutscene. The Sakai clan armor isn’t there, as Yuriko hid it, so follow her. In the adjacent room, you will find the Deaf Ears Record right on the ground, so you might as well pick it up while you’re there. Continue following Yuriko, until she gets to Taichi, who will help her retrieve the armor for you. 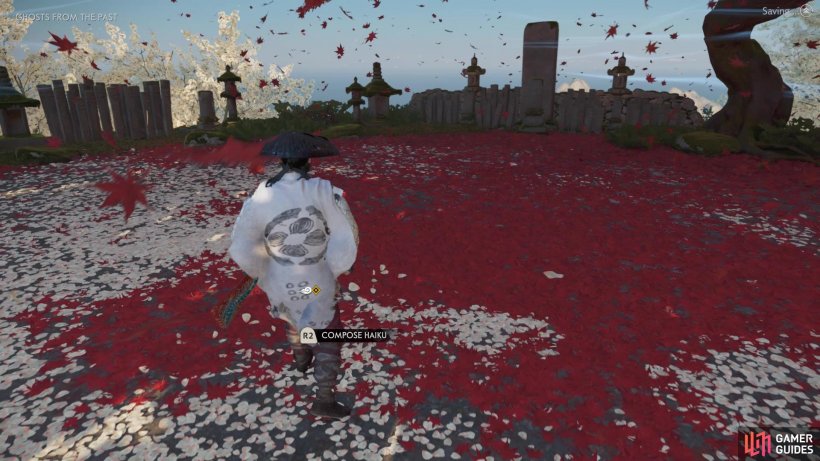 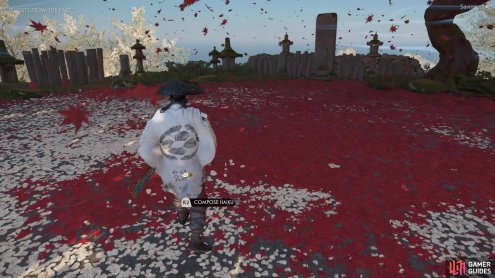 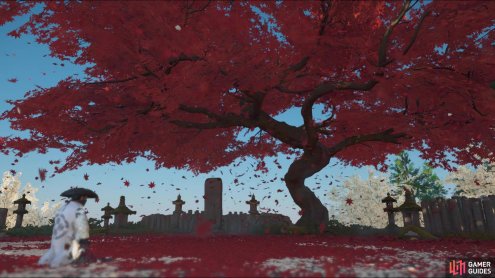 You are required to do a Haiku near your father’s grave (left), although you will get nothing for it (right)

While they are doing that, you decide to visit your father’s grave, which isn’t that far away. When you get there, look for the marker and you will see a prompt to compose some Haiku, so go ahead and do that, although you won’t actually receive any vanity item for this Haiku. Return to the Sakai Estate after finishing the Haiku to finally receive the Sakai Clan Armor. While speaking with Yuriko, some Straw Hats decide to show up and challenge you to a fight. There’s only three of them and they all function pretty much the same, so keep an eye out for any unblockable moves, then cut them down to size with the Stone Stance.

Tip: You should make it a point to upgrade the Sakai Clan Armor as soon as possible, as you not only get a boon to health and damage, but at max level, you will be able to kill two additional enemies during a Standoff. With the three maximum from Technique Points and the two from the armor, you can unlock the All in the Wrist trophy.

Speak with Yuriko again after the battle, then follow her down to a familiar tree, where she will tell you about her experience with plants. Jin wants to use poison to fight against the Mongols, but needs some materials for a blowgun. She points out some reeds not far from your current location, but there is a Mongol outpost there. While you don’t need to liberate the outpost now, you might as well while you’re here.

Your main objectives in liberating the village including defeating the Mongols, as always, as well as eliminating the war camp general, destroying the black powder cache and recovering four Sashimono Banners. So, there’s nothing out of the ordinary now and no bonus objectives at all, meaning you’re not going to get extra legend. The Sashimono Banners are highlighted for you whenever you’re close enough, plus you can see their outline whenever you use Focused Hearing. The outpost is kind of split up into two parts, with the section containing the reeds you need not having a whole lot of enemies, while the other side across the river having a lot more enemies. 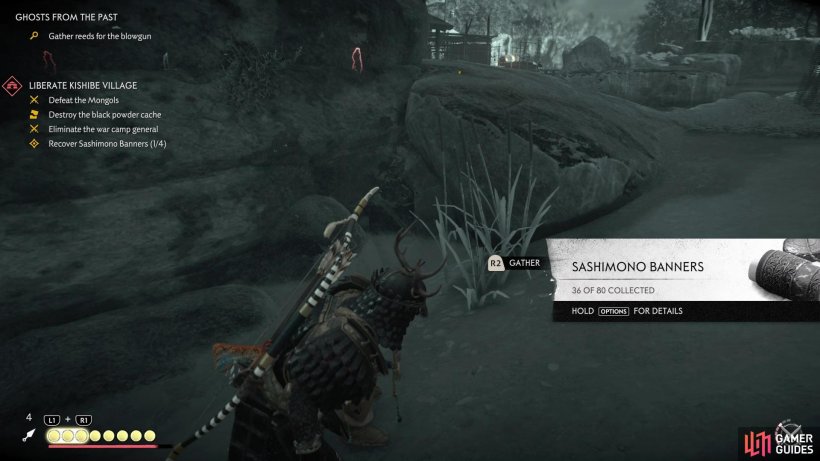 (1 of 2) The location of the reeds for the Blowgun 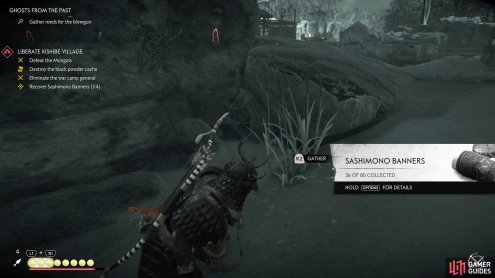 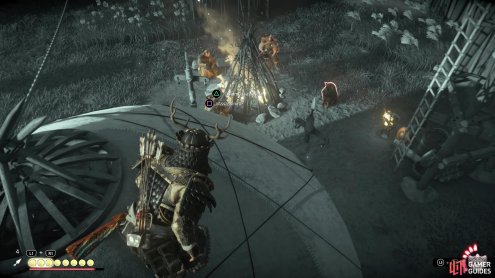 The location of the reeds for the Blowgun (left), Some enemies are clumped together and make it easy for chain assassinations (right)

If you’re just looking for the reeds, then they will be right next to a Sashimono Banner, making them a lot easier to find. Across the river, as previously said, the number of Mongols is a lot more dense and includes a few Mongolian dogs. Unfortunately, stealth-killing the dogs isn’t possible as with the regular Mongols, but a single fire arrow does put them out of commission. It might be best to start on the riverbank, assassinating all of the Mongols there and working around the outer perimeter. A leader-type enemy will be by the black powder cache and thanks to Ghost Stance, you can now assassinate him, too. Once you clear all of the objectives, you will free the camp.

In the main tent that the war general resides in, you will find the Greek Vase Mongol Artifact and in one of the buildings on the southern side of the outpost will be a Conversations with the Khan Record. Return to Yuriko with the reeds and you will need to follow her in order to get the poison. Upon reach her little camp, Jin offers to collect the flowers for her. They are all within distance of the fire, so look for the purple flowers and collect them all. 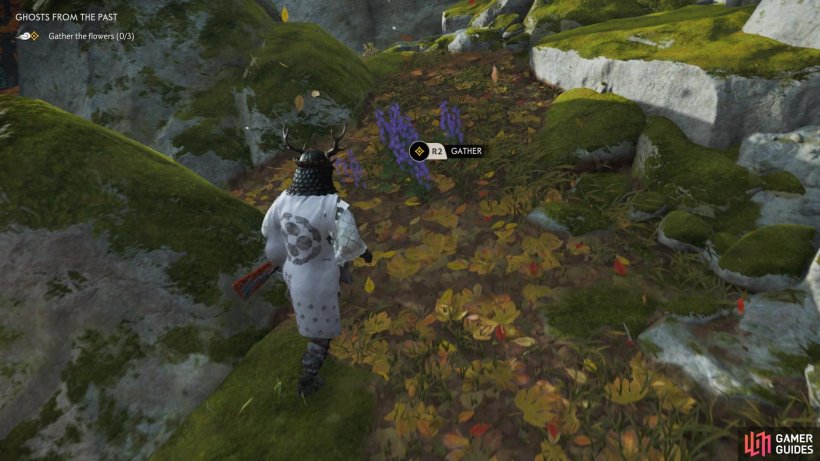 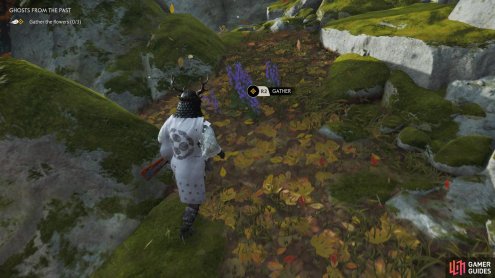 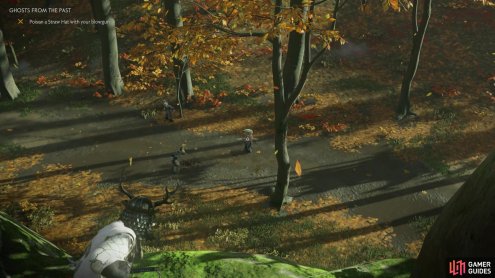 The flowers that Yuriko need are purple and easy to spot (left), Hold the fire button down then let go to fire the Blowgun (right)

Bring them to Yuriko, who will finally make the poison for your blowgun and darts. You overhear some Straw Hats nearby, which is a good chance to test out your new poisoned darts. The Blowgun is automatically equipped here, but it’s in the same group as your bows, assigned to the down direction on the D-Pad. Hold down the button until the reticle shrinks all the way, then let go to fire it. Hit two Straw Hats to complete the objective, then report back to Yuriko to finish the mission.