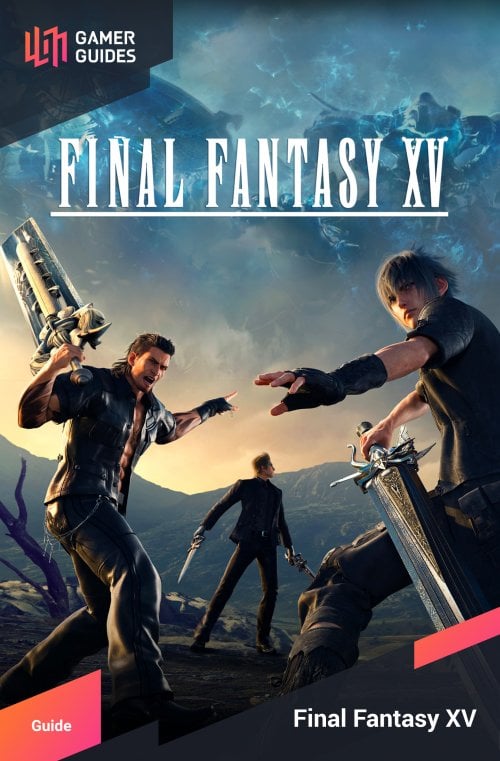 Get into the Regalia and start by heading towards your destination: the Longwythe Rest Area, which is to the south-west. If you opted to drive yourself, choose Manual when getting into the car or if you just want to sit back, choose Auto and your destination.

If you're ambitious, you can knock out another quest on your way south. Pick up another Repair Kit from the Mini-Mart at Hammerhead, then look at your map and follow the highway (indicated by a green line) south-west until it's bisected by another, less important road (indicated by a yellow line) running north-west. This yellow road runs up past Merrioth Haven to The Three Valleys, but for now, your interest lies where it bisects the highway. Set a map marker there (Square/X) and drive down there. Once you arrive, dismount your chariot of sorts and head north into the wilderness to claim a Treasure Spot, which yields a Garnet Bracelet , a handy accessory that boosts your Strength by +30.

That's not all you're here for, however. Run up the dirt road that bisects the highway and you'll find another stranded motorist. Talk to him to start the quest " Unlucky Driver ", then give him a Repair Kit to end the quest. Once you're done, hop back in the Regalia and continue your drive to the Longwythe Rest Area.

Continue driving to the Longwythe Rest Area and you may be treated to another type of side quest - the Photo Op (in this case, the side quest "Photo Op: Mountain" ). As you drive around in the Regalia, Prompto may randomly feel the urge to take pictures of noteworthy places... noteworthy to him, anyways. The places he wants to take pictures of aren't random, but whether he'll feel the urge during any given drive near them is, so it's hard to pin down when, exactly, he'll trigger these quests for you. That being the case, future iterations of these quests will be noted as you pass by where they may trigger, but otherwise will be left up to chance. As for the substance of these quests... there isn't any. In every case you need only run to the marked location, take the photo, and enjoy a tiny bit of experience.

When you finally arrive at the motel, park your car and approach the front desk to deliver the package. There will also be a short scene here, depicting a flashback with Lunafreya, after which you'll get to deliver a message to her through the services of Umbra, a dog. When everything is said and done, you can finally be on your way to Galdin Quay.

Well, after you look around here, of course. First off, note the character standing near the motel with a question mark above their head. This isn't the first side-quest you've done if you've been following this guide, but it's the first one that's been properly marked. You might as well do this quest, too, as it's incredibly easy, and the reward - which includes ten Hi-Potions - may come in handy. All you need to do is find the " Head Hunter ", as in the chief hunter, not the hunter of heads - or chiefs. Anyway, you'll find this hunter - who happens to be none other than your good friend Dave! - just east of the diner. Talk to him and he'll tell you about some Dog Tags he came here to look for, a task he'll happily pass onto you.

Before you can go off hunting Dog Tags, however, you'll need to visit the diner (Crow's Nest Diner) to get some intel. First, visit the lady running a humble shop out of the back of her red truck, as she's got a few things of interest to sell. Pick up some Cleigne Wheat to spur Ignis into inventing the "Garulessandwich" recipe, and grab the car parts to add more customization options to the Regalia, if that interests you.

Once you're done shopping head on into the diner and talk to the restaurateur, who has the same three dialogue options the last one had. Pick "Talk" to learn about the area (including the tip you need to advance "Gone Hunting", then peruse his menu to find two new dishes you can order, the consumption of which will inspire Ignis. Kenny's Fries (150 Gil) will result in the creation of the " Dish and Chip s" recipe - a fine, easy to make meal that requires only one Leiden Potato, which increases your maximum HP by 300. Kenny's Salmon (1,400 Gil), if you can afford to toss that much Gil down your gullet, will inspire the wholesale rip-off recipe " Kenny's Original Recipe ". The former, given how easy it is to make and how agreeable its bonus, will probably become a staple you can afford to make every time you camp: it's a great way to feed Ignis's Cooking skill.

Last and not least, ask the proprietor about "Hunts" to get access to another list of hunts you can take on:

*Only available after "Balouve Mines".

There's one more thing to see in the diner: another mini-game, which is easy to play, time-consuming as hell, and potentially very, very lucrative. Turn your attention to the arcade machines along the western end of the diner and behold: Justice Monsters V. At first glance it might look like a pinball machine - and it kind of plays like one, albeit heavily mixed with a block destroyer game.

The object of the game is simple enough: you control a variety of "monsters", little balls which you need to aim at other monsters. That's right, your monster is the "ball" you use to smash targets, but instead of there being any goal or pit, the stationary monsters you're fighting against perform attacks, which will damage your monster if they hit. Your monsters each have an elemental affinity, and enemy attacks have elemental properties, too - you take more damage from opposing elements, and less from the element your monster has an affinity to, as do your foes.

There are monsters of different levels, which are naturally stronger than lower level ones, and typically each level consists of three stages, ending with a "Boss Encounter". Kill all the opposing monsters and you move on to the next stage. The attack types, enemies and stages are incredibly limited; you can't usually be harmed if you just sit at the bottom of the screen, and there's no time limit. To attack, just press the X/A button, or hold said button to charge up an attack for an opportune moment. When idle, your monster rolls back and forth along the inside of an arc at the bottom of the screen - when you attack they'll alway launch themselves outwards in the direction opposite the degree of the arc they're on, so a bit of good, old-fashioned pinball aiming exists.

What's the point, then? Is it to advance to a certain level? Rack up a high score by defeating foes? No. Your goal in this game is to collect treasure chests. How do you get treasure chests, you ask? Hit bumpers, which come in a limited variety of shapes and placements. As you hit bumpers, lights on the middle of the track will light up, and when fully lit a larger, numbered circle will light up and a slot machine will start. If you get three chests, you'll be rewarded five chests. Get two chests and you'll get two. Anything else is basically a waste. You can do this four times per level (remember, most levels have three stages), after which you'll need to progress to the next level, which will change the number/type/placement of the bumpers (some assortments of bumpers are easier to hit than others) and reset your lights, allowing you to get four more slot spins.

There's precious little strategy to go over, as the game is mindlessly easy. It's very hard to die, and you have four monsters at your disposal. The likelihood of losing all four in a single game is just... hard to comprehend. If there's any advice to give about this game, however, it's learn enemy timing, remember that pressing X/A will lead to faster, weaker attacks (good for striking bumpers, not so good for killing monsters) and that charged attacks have a delay to them, so plan your attacks accordingly.

Why bother with all this? Well, when you get as many chests as you want and invariably end up quitting (you're not going to die, after all) you'll get a prize when the game ends. The prize's quality is commensurate with the number of chests you claim during your game, as follows:

It'll take a bit for some of this gear to become obsolete, and getting your hands on things like the Emerald Bracelet (+60 Strength) and the Platinum Bangle (+400 HP) will make you significantly more powerful. If that interests you, and you have the time to burn, well, grinding out some of this gear might be worth the effort.

One last thing you can check out is the motel here, as this will increase the experience you have saved up by 1.5 times, which is better than the 1:1 ratio when using Havens out in the wild. Before you move on from the motel, head east from the office window to the eastern end of the building and search the wooden walkway to find another Mystery Map on the ground near a door and some white patio furniture. Picking it up will start " Scraps of Mystery I ".

Now that you have the intel you need for this quest, you might as well help old Dave out again. Head north into the wilderness towards the quest marker to find an abandoned campsite. Some movement to the east will tip you off to what might have happened here. Make your way to the next quest marker (which will take you near a Mineral Deposit) to find a pack of Sabertusks. Destroy them, then search around to find the hunter's Dog Tag . You can now return to Dave for compensation, and the reward you'll get is listed below, but, well, since you're out here, why not pick up some goodies?

First, look at your map and note the large rock formation north of the Longwythe Rest Area. Longwythe Peak gives the area its name, and it's around this you'll be primarily exploring. Head west of the hunter's camp (just circle around the base of Longwythe Peak) and you'll find a Treasure Spot, which yields a Green Choker . Not the greatest find, but the price is right. If you head around to the northern end of Longwythe Peak you'll find another Treasure Spot with a Mega-Phoenix waiting for you, if you can be bothered to deal with the Sabertusks and Dualhorns roaming around here.

Return to the Longwythe Rest Area and head south-east into the wilderness to find yet another Treasure Spot, this one yielding a Star Pendant . If you continue south-east you'll find the Emmelle Haven campground, and beyond that another Parking Spot, for what little use it is. Finally, in the wilderness west of the Parking Spot you'll find a Treasure Spot, where you can score a Hi-Elixir . 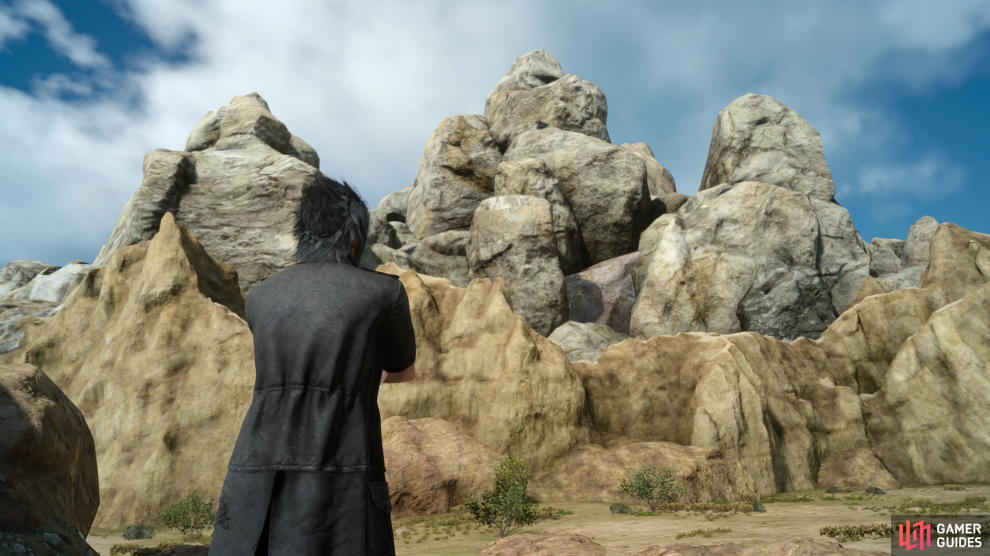