Speaking of which, return to Cape Caem to find even more sidequests waiting for you. Before you go starting any new quests, however, you might as well see to some old business. If you told Gladiolus your favorite ingredient was "Shrimp" during the quest "A Need for Noodles", head south-west from the Cape Caem Outpost marker (the spot along the highway where the Regalia is parked, by default) and into the wooded land north of the beacon.

Dispatch some Shieldshears and continue west to find a giant lobster - a Karlabos - skittering around. This monster will be here regardless of whether you're here as part of "The Perfect Cup" or not, the only difference being that in the case of the quest it'll be called a "Rogue Karlabos". This enemy, as the obligatory epic music suggests, is no push-over, being capable of inflicting immense amounts of damage with its attacks, which include spraying the area in front of it - either in a short-range burst or an long-range line - with fluid from its tail. Being a big, mean crustacean, it's also not afraid of leaping on prey (that's you) and skittering sideways before attacking with its massive claws.

Fortunately, despite its size and damage output, its attacks generally fall into one of two categories: easily dodged, and easily blocked and countered, which should make it easier to defeat that its level would otherwise suggest. Even if you're not here for the quest "The Perfect Cup", killing this beast will get you some Karlabos Claws, which are useful for a few recipes, if nothing else. If you are here for "The Perfect Cup", be sure to rest at a campground somewhere to finish the quest. It's not done until Gladiolus eats his meal, after all.

Living Off the Land

Now that the business with oversized lobsters is done, make your way to the Cape Caem hideout with the intention to pursue some of these new side quests. First talk to Iris, who is standing on the porch of the Hidden Getaway house and she'll tell you about her garden, which is finally set up and ready to start producing. If you're excited by the prospect of farming, don't be, as you can only grow Caem Carrots here, and since Noctis doesn't like them, you won't be eating them.

Note (Photo Op: Beacon): As you approach Cape Caem, you might be pestered by Prompto, who of course wants to snap a few more photos. Walking a bit and indulging him is worth a bit of experience, as usual. 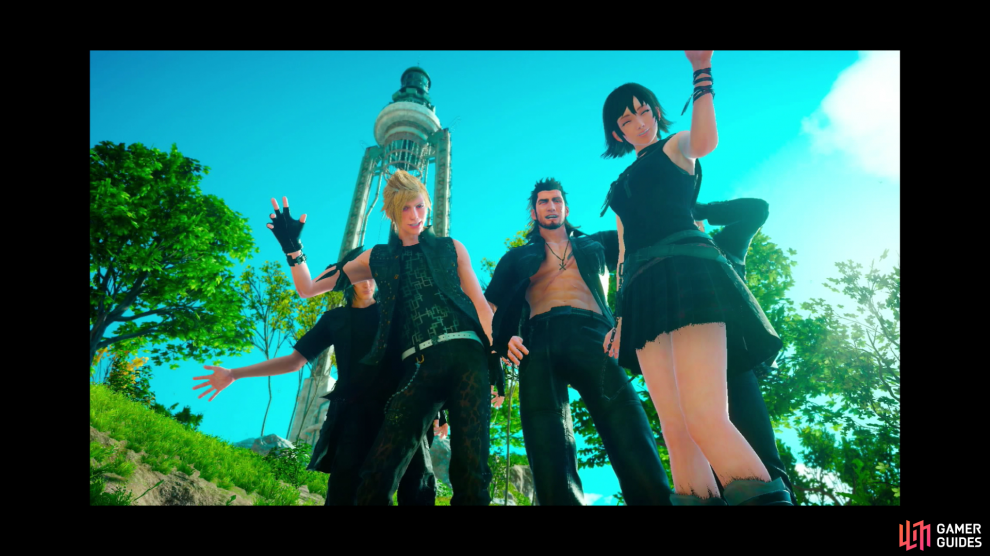 What's the use of them, then? Well... first you need to get yourself some carrots. Head over to the field and interact with the soil to plant the crops, after which you'll need to rest for the carrots to grow. Yep, they're fast-growing carrots that sprout when you dream. Or something. You might be tempted to just keep resting to harvest carrots, especially since there's profit to be had in it, but you'll at best get two crops out before the soil becomes "impoverished". Carrots grow when you sleep, and soil becomes replenished when you complete side quests. RPGs are funny like that. So plant some carrots, sleep, then head out and gather them, repeat, then you'll need to complete side quests. Fortunately you've got a few coming up, and it'll be left up to you if/when to return after completing said side quests to collect more carrots.

As for the rewards, after your first haul a restaurant owner by the name of Tony stops by and offer to pay for your premium veggies. What luck that he happened by just as soon as you uprooted them, eh? Anyways, you can trade between one and four carrots at a time, and the number you'll get per harvest varies depending on the weather (between two and five, usually). The rewards for doing so are as follows:

The "Auto Parts" include a variety of character decals: Noctis, Ignis, Prompto, Gladio and Umbra. The weapons - Force Stealer (greatsword), Absorb Shield (shield), Valiant (firearms), Plunderers (Daggers) - are all elemental-absorbing weapons that can be upgraded by Cid, making them well worth getting. Picking up some Ulwaat Berries is also worth doing, as they're required to complete the quest "Berried Memories". Go after the weapons, first, then come back periodically to collect more carrots as you complete quests (or Hunts - even repeating old hunts will work), picking up Ulwaat Berries after the weapons are depleted, then, finally, work on the decals if you care to.

Speaking of Berried Memories, once you have the Ulwaat Berries, you might as well see to this quest. Return to Galdin Quay and talk to Coctura - the proprietor of the Mother of Pearl restaurant. Seems she was making a dish for you, or to honor your impending wedding, in any event, and needs one final ingredient - some Ulwaat Berries. If you traded some carrots for them, hand them over to Coctura to finish up this quest.

Note: You can now buy the Tenebraen Berry Opera meal from Coctura, which "greatly increases magic, but reduces strength to 0". This dish will set you back a whopping 12,000 Gil, but consuming it will teach Ignis the "Memory Lane Pastry" recipe, which is functionally identical, if a good bit cheaper to cook up yourself.

When you're done messing around with carrots (for now at least) head into the the Hidden Getaway house and talk to Talcott, who will profess his love of Cactuars... or at least statuettes of them. His request is a pretty simple pair of fetch quests "A Cactuette of Wood" and a "Cactuette of Mortar", both of which are under the umbrella of the quest "Crazy about Cactuars". If you bought the Cactuar Statuette from the Post Kiosk at Wiz's Chocobo Outpost and the Cactuar Model from Veenon's Trading in Lestallum, you should be good to go. If not, you'll need to head to those locations and drop 500 Gil and 1,000 Gil on them, respectively. In essence, you're trading your time and money for 2,000 experience.

The last bit of business requires seeing to one more pest. Head over to the lighthouse and make your way behind the structure to find a familiar feline resting on a crate. Noctis will again use his powers of kitty communication to decipher the pussy's predictable plight. After some group chatter, a course of action will be decided upon - see if Monica has any ideas.

Return to the Hidden Getaway and talk to Monica and she'll surprisingly indulge your nonsensical request... insomuch as she'll agree to cook whatever you can bring her. Your options are to shell out an absurd amount of cash - 20,000 Gil - to buy some Luxury Cat Food from the nearby JM Market - Caem or you'll have to catch a Dark Allural Sea Bass from the Caem Shore Fishing Spot, to the north-west. Be wary, though, as this may require you to possess some levels in your fishing skill, upgraded rods and reels and perhaps some Super Baleen or even Dragon's Beard fishing line, as big, nasty fish inhabit that Fishing Spot.

Get whatever meal you can and feed it to the cat to finish this quest, the reward for which includes a Sky Gemstone , an upgrade component for the Circular Saw. Speaking of upgrading weapons, you've got - or will soon have - a bunch of new ones that need upgrading. Not only that, but you have the freedom and power to gather the components to upgrade older weapons. A bit of discussion seems necessary on the matter of upgrading weapons.