The next main mission is not too far ahead, but there’s a few things to take care of in the southwestern corner of Izuhara. Southwest of the Logging Base is a bridge, so cross it and continue straight west from it to discover a Fox’s Den. Let the fox bring you to the Inari Shrine, then fast travel back to the den. Follow the road south and you will eventually reach a building on the southern coast. Not only is there a Side Tale here, but if you look behind the building, you will find the Seaside Hot Spring. Take a dip to increase your maximum health, then venture a little southeast of it to find the beach. 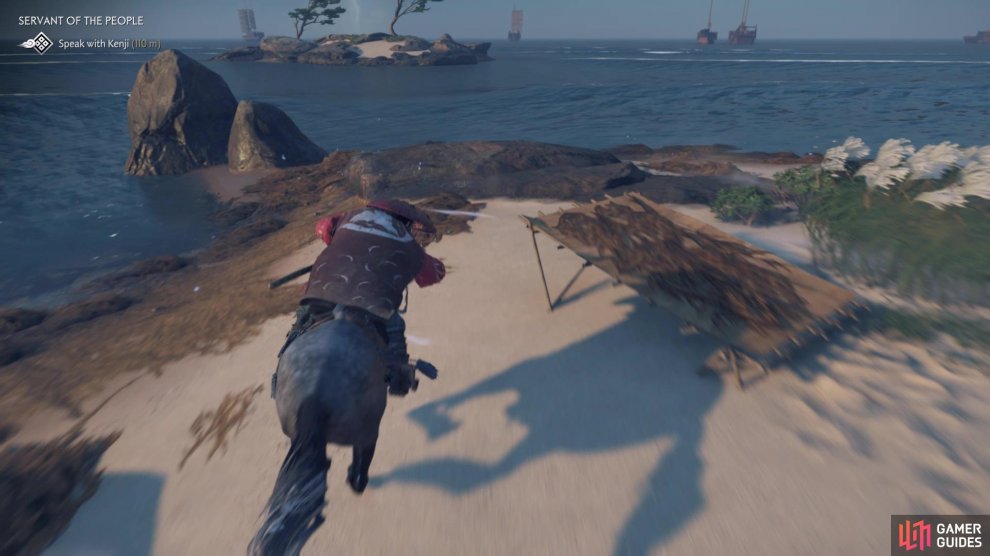 You are looking for the boat washed up on shore, which will have the Chikurin Headband attached to it. Now, go ahead and do that Side Tale, which is called A Healer’s Touch. Double back to the Hot Spring, then head west, where you will happen upon Aoi Village. There’s really nothing to do here, although you will find another Side Tale, Servant of the People. If you head south of Aoi Village and swim to the not-so-distant Kijo Isle, then you will find another Side Tale there, called Lost at Sea.

From Aoi Village, follow the western coastline to the north and you will come to this enemy encampment. Since you now have a proper way of dealing with helmeted enemies, the first thing you should do is snipe the two archers standing on towers. Just note that the Longbow has a strong oomph to its impact, so the archers could be knocked off of their platforms, possibly alerting other enemies. Outside of that, this is a relatively small enemy camp, so there’s not going to be a lot of enemies for you. You will want to try and be stealthy at this camp, simply because you have the option to observe the enemy leader. Other than the above, there’s not much else to say about this camp, so clear it out. Make sure you stop by the one tent to loot a Mongol Artifact. 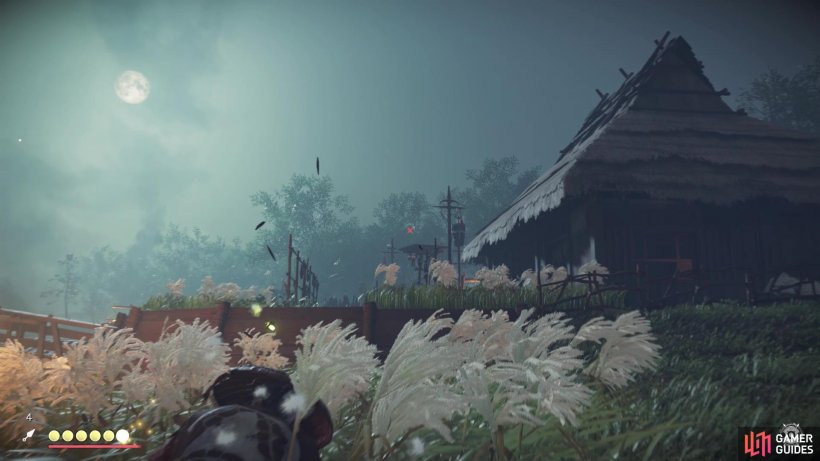 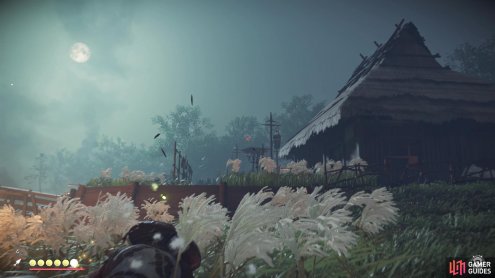 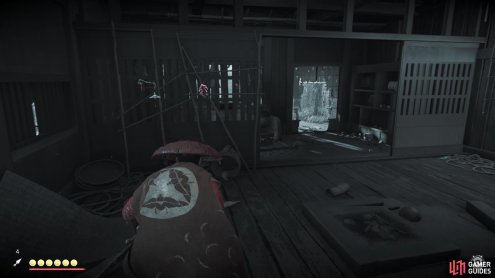 The Longbow’s more powerful than the Half Bow (left), so enemies might go flying and alert others (right)

While still following the coast, continue north and you will run into the marker for the main mission, Blood on the Grass.

Blood on the Grass

Upon reaching the mission marker, you will find some smoke and a Mongol convoy that seemed to have been ambushed, complete with dead Mongols. Inspect the dead Mongol by the cart, then follow the trail of bodies. Eventually, you will come to a Mongol still moving, so put him out of his misery, if you want, then there’s a little bit more to follow until a scene occurs. While reminiscing a bit, some Mongols appear to attack you and your friend, so get ready to defend yourself. You will have a number of enemies to deal with here, red-tiered and blue-tiered ones. The red-tiered enemies have already been covered, and while the blue-tiered ones are generally the same, there’s some new things to talk about with them.

One of the new enemies will be wielding a larger curved sword. They are not really any different than usual swordsmen, but they might take a little used for timing parries on them. You will also run into a brute enemy with an axe. They will perform two sweeping unblockable attacks, then follow up with an overhead unblockable. If you’ve already unlocked the Moon Stance (which is entirely possible at this point), then you can use that to easily stun them. Otherwise, don’t worry about the maneuvers and just try to dodge them all. Once you defeat all of the Mongols, it’s time to carry on with the mission. 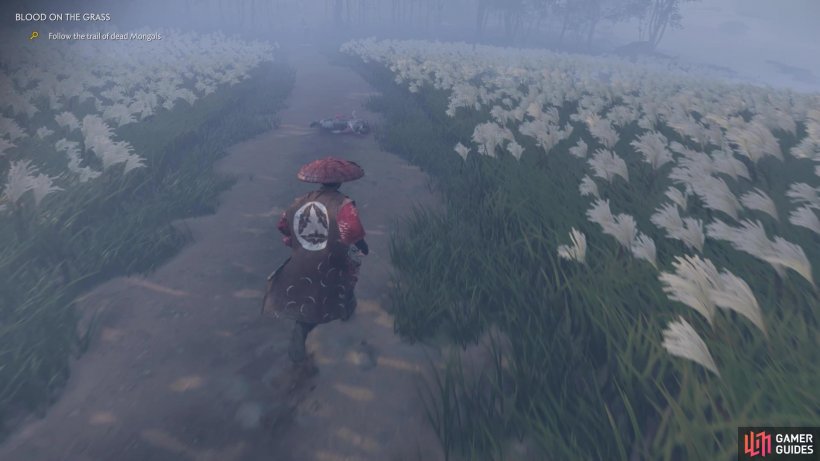 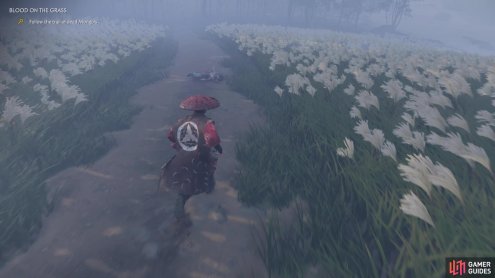 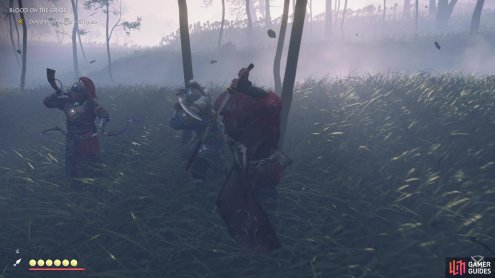 It’s easy to follow the trail of dead Mongols (left), You will likely encounter blue-tiered enemies for the first time here (right)

Ryuzo is apparently the leader of the Straw Hats, who are in trouble because they have no food. Jin decides to go to the Straw Hats camp, so follow Ryuzo until he stops by a cart on the side of the road. The wagon belonged to a peasant, who runs by, so speak to him to learn that he has nothing, although he points out they went toward Fort Ohira. For now, though, continue following Ryuzo until you finally arrive at the camp. After a short conversation, follow Ryuzo once more and he will let you take some new armor, the Ronin Attire. This armor focuses a little more on stealth, although it does improve the damage doe via melee. You will also received the Weathered Straw Hat. That’s the end of the mission.