VIA VERITAS – TALK TO ABBY’S FRIEND 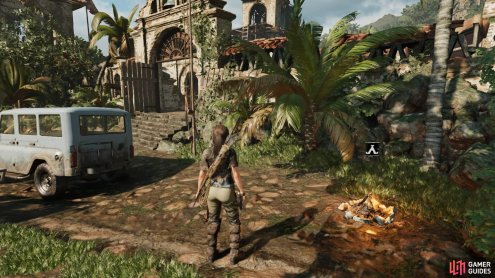 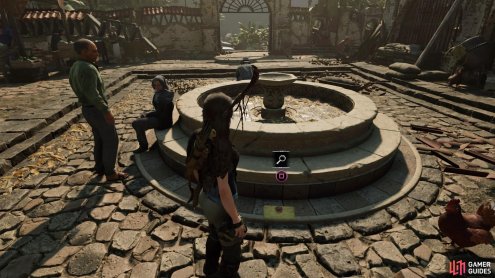 When you arrive outside the village, you can look to the right of the gate for the Mission Gate Base Camp and take a moment to upgrade or purchase Skills.

Note: Next to the base camp is a flagpole that you can interact with. If you cut the rope, you’ll start the Raise the Flags region challenge. Explore the village to find the other four flags.

As you enter the village, feel free to explore a little for resources and documents. As you enter through the front gate, you can find Document - Disaster Upon Disaster sitting on the base of the fountain.

There are also two Merchants in this region, one of which can only be unlocked if you have completed the side mission Skill of the Player back in Paititi.

MERCHANT 2 (MUST COMPLETE SIDE MISSION: SKILL OF THE PLAYER)

Pick up whatever you want if you have the Gold to do so, because you won't get another chance until much later.

To continue the story, head through the gate and follow Abby down the steps to speak to her friend, Sara. She directs you toward the library on the other side of the village. Return to the fountain, turn right, and meet Jonah straight ahead beneath an archway. Follow him through the cemetery to the library. 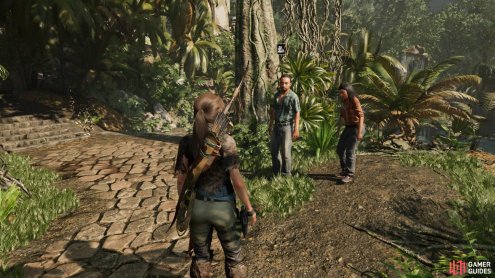 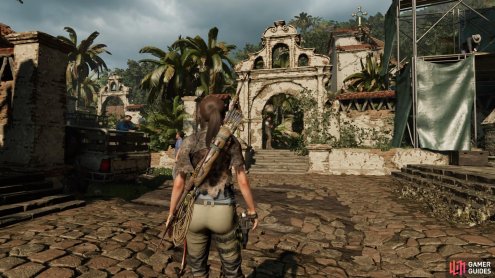 Note: Before leaving Sara, speak to the man, Guillermo, standing next to her to activate the How Sweet the Sound side mission.

Inside the library are hidden murals for you to uncover by breaking down the weak walls. As soon as you enter, stick to the right wall until you find the axe prompt and uncover the first mural.

While you’re up here, there are a few Documents you can collect. Move through the double doors at the back to find Document – De La Cruz Arrives between the bookshelves on the right. Then move into the next room on the left to pick up Document – Ranting on the table.

Now you can return to the bottom floor to activate a cutscene with the large mural on the back wall.

Warning: Before entering the library at all, this will be your last chance to explore Mission of San Juan until you return to Paititi at the end of the chapter. If you wish to complete the side mission, crypts, and challenge tomb before you continue, you need to do it before this point.

Lara and Jonah will drop down into the catacombs below where you’ll now have to follow the puzzles that refer to the seven stages of the cross. These stages are illustrated in the Seven Steps Closer to God pamphlet that Jonah picked up on the way to the library, and can be found in the Artifacts menu at any time.

Now sit back and watch the cutscene.

Lara will be plummeted into the water below, so fast-swim through the tunnel until you reach the very end for another cutscene with Dominguez.

Many of the soldiers during these encounters are heavily armoured and patrol in large groups, so the recommended choice of attack is to go stealth. However, if you’re prepared enough (and since you have access to all your weapons) you can probably barrel your way through quite easily.

You start off in a concealment bush, and with the right tactics you can take out each of the soldiers using stealth kills. Stay in cover and use your surroundings to your advantage. There’s a mud patch ahead of you by the right wall, and a can perched atop the low wall just to your left for crafting purposes.

Remember, you can also use your arrows as distractions as well as plant explosives on dead bodies if you have that skill unlocked.

Once all the enemies are down, move into the next area via the hole in the wall in the back far left corner. 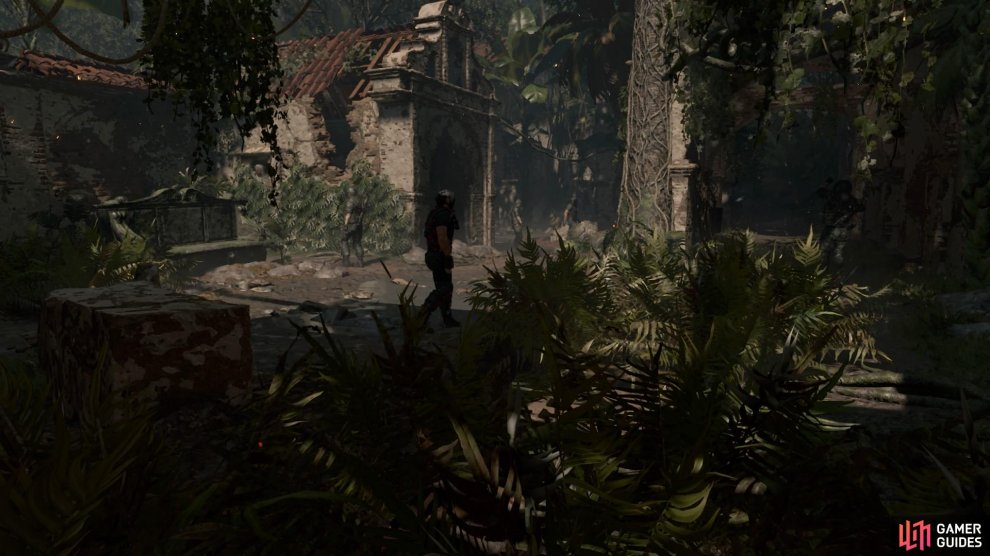 As soon as you squeeze through, there’s another mud patch just in front of you as well as a vegetation wall. Wait for the two guards on your left to move away before you begin your plan of attack.

There are plenty of places to hide in this area and you can even choose to climb up a level to attack from above. Honestly, this is the most likely route to success here. If you move forward a bit from the mud patch, you can scramble up the wall to the upper level and stand atop the wooden platform without being seen. From here, use your Survival Instincts to highlight yellow enemies as they move around the area, and slowly begin to pick them off one at a time with your bow. Once most of them are out of the way, you can probably move back to the ground and finish off whoever is left.

Climb the tall gate to drop into the next area when you're done.

There are eight armoured soldiers patrolling the fields and are already actively searching for you. You can remain hidden in the tall bushes for the majority of this encounter, and can even take out the first two soldiers easily with a stealth kill.

You can use your arrows here again as distractions to move the enemies around or, more easily, make good use of your fear arrows and have them all kill each other off.

When they’re all gone, head for the stone structure on the left and run up the steps to the final encounter. 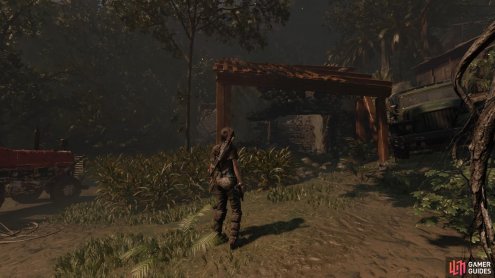 For the last encounter you don’t need to worry about stealth – just go all-out if you can. Feel free to use your rifle or shotgun to take out enemies, and seek out the red explosive barrels to get rid of the groups.

When all the enemies are gone, head into the building on the left and break through the gate. 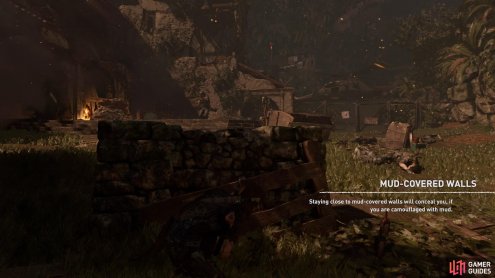 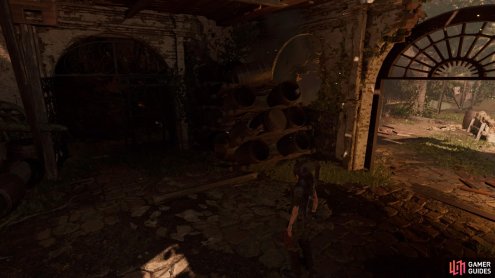 After the cutscene you’ll have one last objective – outrun the landslide. Just like in Cozumel, keep your eyes ahead and never stop. As soon as you hop over the sink hole, take the left or right path. 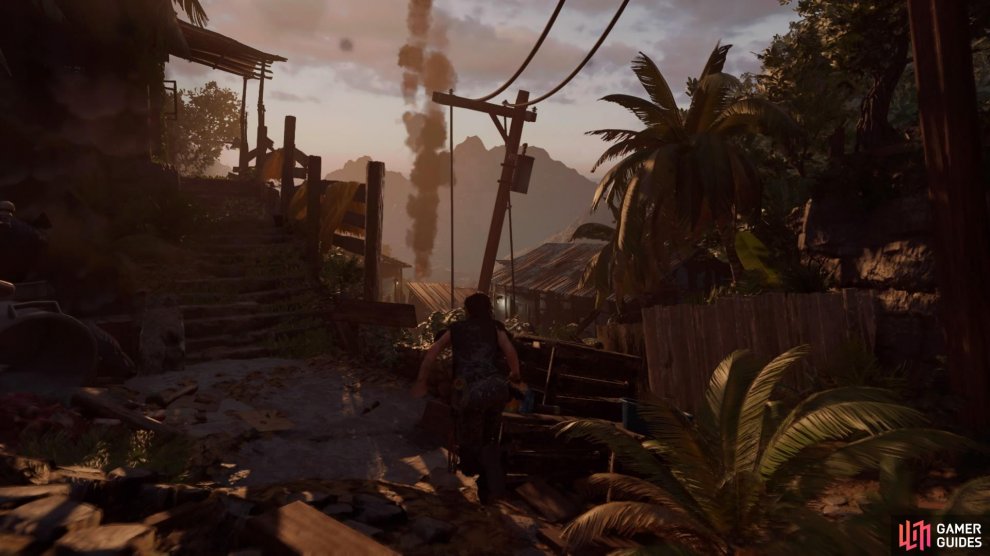 The two paths will meet up just before cutting through the yellow house, so either way, leap up to the upright pole and pull up to jump to the road ahead.

After tumbling down a hill, jump off the wooden boards to a small plateau where the path splits again.

Another slide sends you down more destruction, so jump and swing to the crumbling floor before the streetlamp. Then dodge to the left and jump to the overturned barn. At the edge, jump and throw the Grapple Axe to return to ground.

Now jump over the gaps as the ground gives way and dive into the water at the end to end the chapter.