As you head towards the waypoint marker to Unuratu’s home, Jonah will tell you that they have moved location. Now you must find Skull Cave, located not far from Unuratu’s, so head to the new waypoint. Skull Cave is marked with a white symbol next to a narrow opening in the wall. Go inside to activate a cutscene with Jonah and Uchu.

Note: You will automatically receive and equip the Serpent Guard outfit. This will allow you to explore Upper Paititi and speak to Kukulkan supporters, which in turn denies access to villagers and the rebels. It also unlocks new side missions, so switch between the Serpent Guard and Blue Heron Tunic outfits to explore all the benefits. 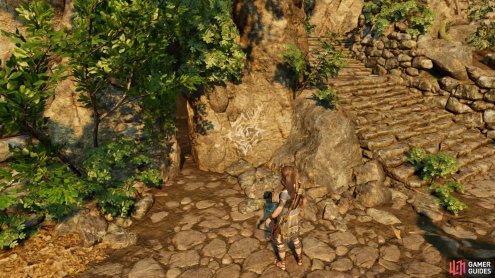 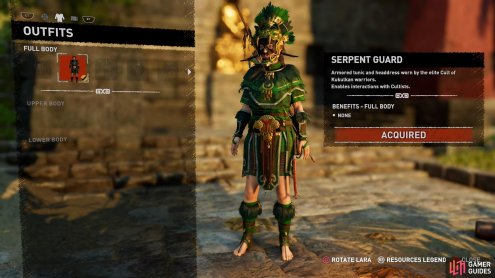 Head to the bridge near the Market District to cross over to Upper Paititi and slip through the opening to follow the corridors. There’s a braided rope-barrier along the way – if you have the Reinforced Knife, remove the barrier to find Relic - Year Bundle.

Tip: You’ve probably noticed a lot of braided rope-barriers by now, which means you might be wondering how to acquire the Reinforced Knife. On the way to the bridge you’ll pass through the Market District where there are two Merchants, a man and a woman. If you go to the woman, she is actually selling the Reinforced Knife at this point in the game, so make sure to purchase it if you have enough Gold.

Alternatively, if you don’t have enough Gold, the Reinforced Knife is a reward for completing the Collateral Damage side mission.

Continue on through the chamber until you reach the monolith on the other side, then turn around and follow the path to reach the Upper City Main Gate Base Camp before meeting up with Etzli. There are steps either side of the Base Camp that you can follow to the back to find Relic - Tlaloc Vase sitting on a table.

While discussing entry into the temple, Etzli will also mention that a friend of his needs help. This starts the side mission, Collateral Damage. It’s not necessary for the story, but now would be the most ideal time to complete it.

This area is also worth exploring for a few minutes to pick up Relic – Wooden Rifle and resources. At the back right of the area is a hole in the wall - scramble through to find two documents as well as an Archivist Map. There’s even a treasure chest available nearby if you have the Lockpick.

Note: To obtain the Lockpick, you must complete the side mission, Dice of the Dead. This will unlock a new Merchant who specifically sells this item.

ENTER THE TEMPLE OF KUKULKAN

When you are ready, walk up to the two guards at the entrance to the temple and head inside. Follow the corridor straight until a cutscene starts. When it’s finished, you can take some time to explore the room for resources, several documents, and three relics.

Exit out the right side and follow the corridor back outside.

Note: Upon exiting the temple, a challenge tomb becomes available. You can access it now or come back later. Instead of jumping to the wall ahead, you can drop off the cliff to reach the tomb below.

You can also start and complete the region challenge Dunkin’ Bones in this area, too. Just look for the skeletons during your climb.

BREAK UNURATU OUT OF PRISON

There are guards blocking the bridge, which means you’ll have to find a way around. Turn left, jump to the craggy wall, and move right.

Note: After crossing the rope the story objective leads to the right. But you can follow a climb to the left instead to find an entrance to a crypt, Uturunku, the Ferryman.

Now you can scramble through the window to activate a cutscene with Unuratu. Afterward, pick up Document - In Name Only on the wall behind you, then break through the weak wall ahead to escape.

Step to the edge of the wooden platform and tether a rope to the coil on the other side, then slide down to the handhold. Shimmy left and climb up until you can grab the cultist soldier and pull him down into the water. Now follow the path to a small wooden ramp and jump to the craggy cliff using the Grapple Axe.

Pull yourself up to the ledge, shimmy left, and climb up to find an unsuspecting archer – throw him to the depths. Unuratu will dispose of the last guard. 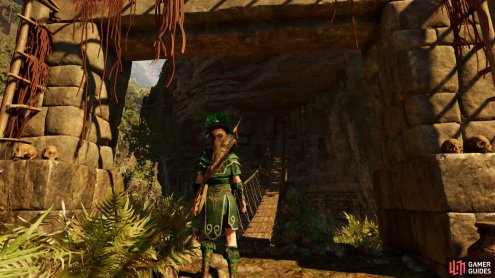 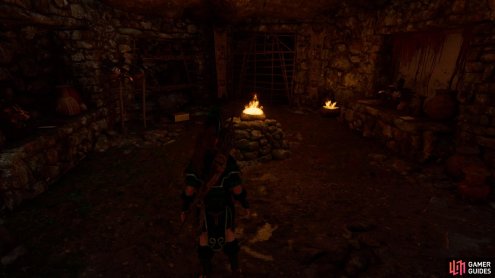 Note: The fourth crypt, Qispi, the Merchant, is accessible here. Instead of following Unuratu up the steps ahead, go left to hang off the cliff edge and drop down to the entrance.

When you’re ready, follow Unuratu through the temple until you reach Upper Paititi and stay with her through the crowd. You’ll come to the gate on the far side which puts you close to the Emperor’s Tomb.

You'll automatically gain entrance through the door and come out into a courtyard.

Now you can move through the temple, exploring as you go, until you eventually exit at the top of the statue.

After the cutscene, cultist warriors enter the courtyard to search for you. There are plenty of concealment bushes and vegetation walls to provide cover and you should be able to scramble around the area easily and without detection.

You can pick them off with stealth kills if you isolate them, but if you get spotted you can run around the structures and into concealment again. If you listen closely to the enemies when they speak, they will let you know if they’re looking for or have lost track of you. 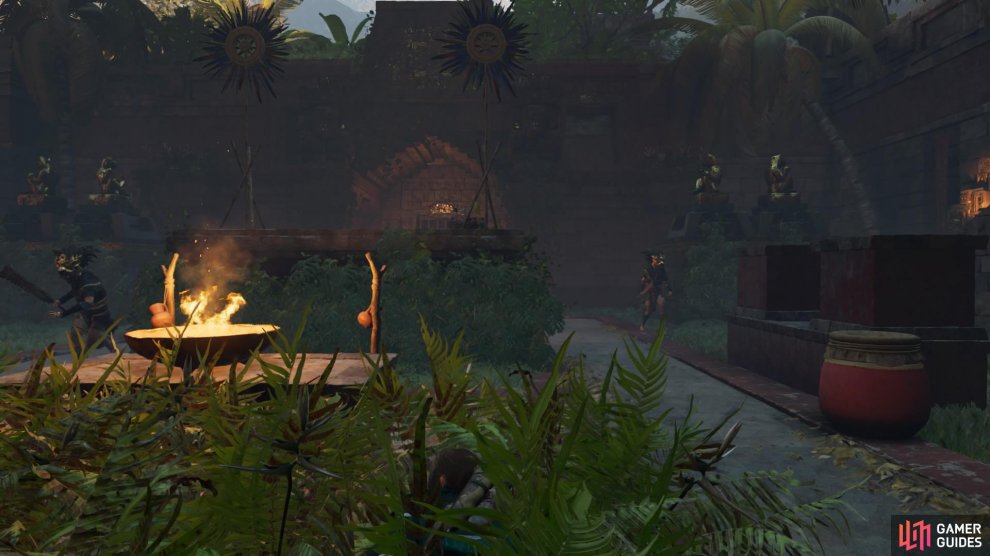 There are also red explosive barrels sitting along the walls around the area if you’d prefer to go all-out. When the enemies get close to them, shoot an arrow to cause a heavy damage explosion. Grabbing their attention like this can cause them to group up, providing opportunities for multiple kills. Just be aware of the fire they throw your way if they know your whereabouts.

Once they are all gone, make your way toward the exit. There’ll be a guard blocking the way, so take him out, but note that you can’t leave the area if you’re still engaged in combat.