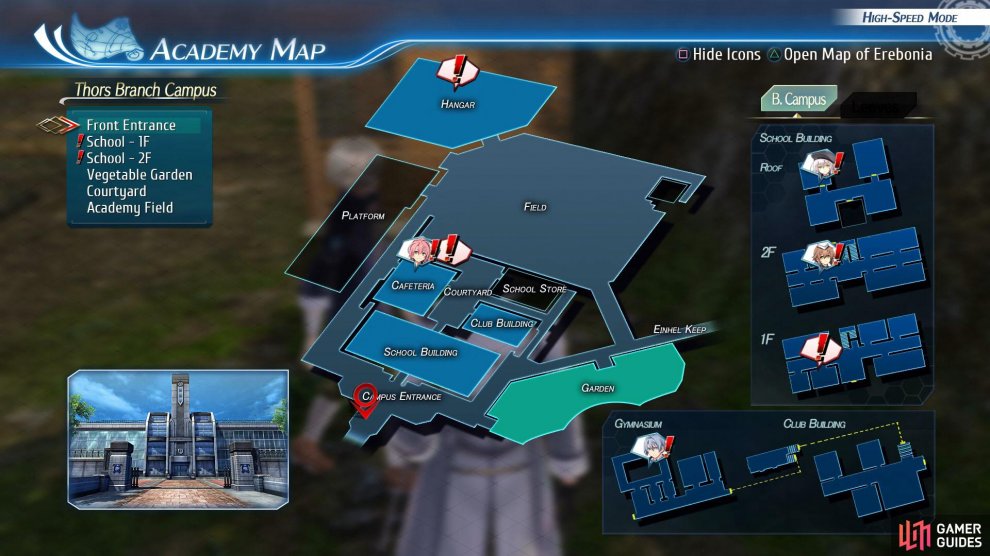 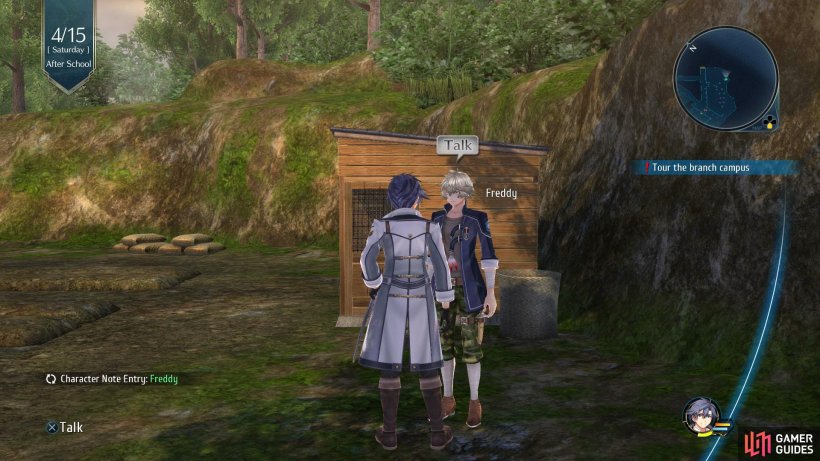 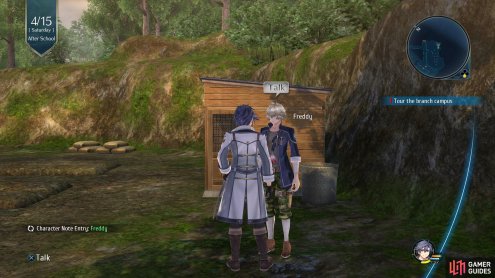 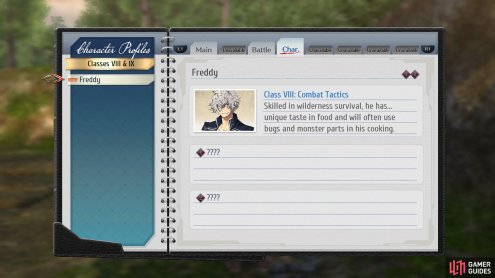 Speak to the Students around the campus to receive their Characters Notes (left), which you can then view in the menu to get some more information on them. (right)

Two weeks have passed since the Orientation Exercise and Class VII are settling into the routine of their new lives. You’ll gain control of Rean in the Main Building and be introduced to Quick Travel and Character Profiles. Quick Travel will allow you to get around places you’ve been before by pressing the [Square] button while Character Profiles will give your more background information on all of the characters in the game. This is tied to both a Trophy and some important rewards much later in the game so be diligient about collecting them all.

Warning! The Character Profiles Trophy is one of the most easiest to miss in the game, be sure to create a save at the start of the day in case you advance the game without getting the notes on that particular day.

Your first duty as instructor will have you taking a stroll around the Campus to speak with the Students, upon finshing their dialogue you’ll gain a Character Note, these will give you some background information on that person. Your first stop will have you exiting the building and walking over to the left which will lead you into the Vegetable Garden, here you’ll want to speak to the creepy student that’s standing alone, after he is done talking you’ll receive Freddy’s Character Note. 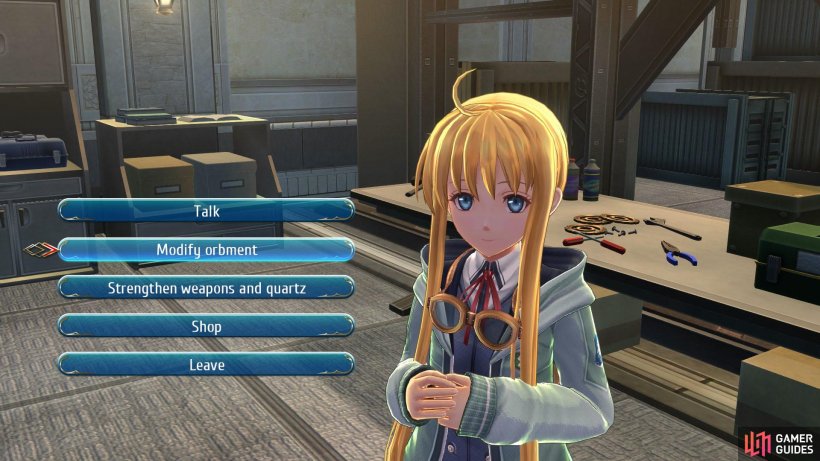 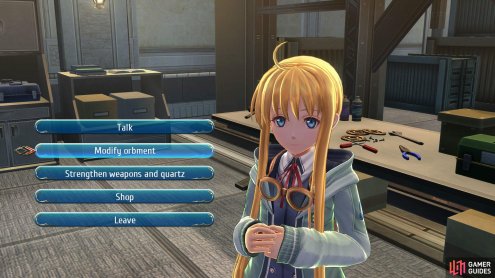 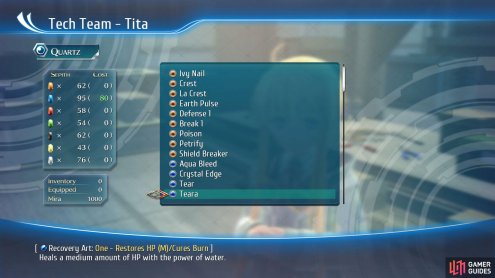 Speak with Tita in the Hangar and she’ll mention about Orbments (left), after the cutscene you’ll want to create any Orbment you like to progress further. (right)

Next up you’ll want to make your way over to the Academy Field to find Louise and Jessica standing at the back together, speak to them both and you’ll gain Louise’s and Jessica’s Character Notes. Enter the Hangar and you’ll view a short cutscene with Tita, she’ll then gain the ability to synethize Quartz for you and the team. Interact with her and select Modify Orbment and consider creating the Teara Quartz, this will give the characters with it equipped the ability to heal a medium amount of HP. After another short cutscene has played out you’ll be given some more information on Orbments and Tita’s Character Note. 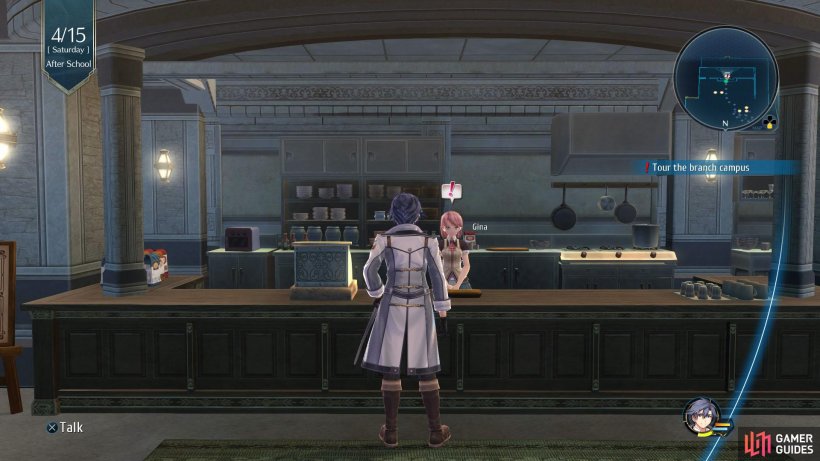 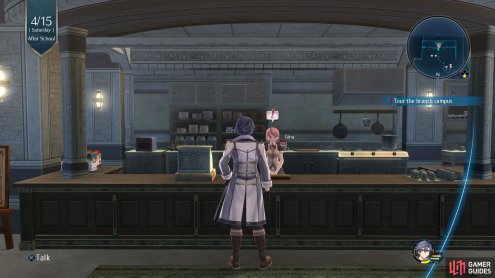 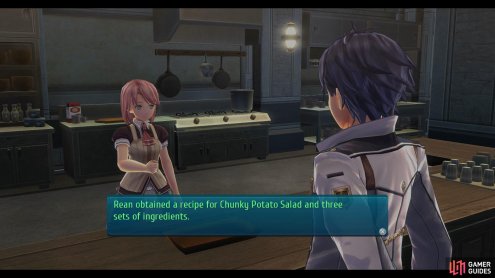 Talk to Gina that’s serving in the Cafeteria (left), and she’ll give you the Chunky Potato Salad recipe. (right)

Note: Throughout your adventure you’ll notice different quest icons on the map, Red indicates that it is a Main Quest. Green means it’s an Optional Quest, but there are also hidden Optional Quests too. Finally, Blue icons mean it is school student related.

Quick Travel on over to the Courtyard to speak with Valerie to acquire her Character Note, then head into the Clubhouse that’s opposite her. Go downstairs and enter the Firing Range to speak with Leonora and Maya to receive both of Leonora and Maya’s Character Notes. Head to the Clubhouse 2F and speak with Sandy to obtain her Character Note. Now Go back out onto the Courtyard and follow the path around to enter the Cafeteria, here you can speak with Gustaf, Stark, and Sidney to acquire their Character Notes. Speak with Gina that is standing behind the counter at the back of the room to chat a little bit about cooking, here you’ll obtain a Recipe Book alongside the Chunky Potato Salad Recipe. After you’re done talking you’ll be given a tutorial on Cooking.

Note: There’s another missable Trophy here, Food Warrior!. Make sure to be diligent when exploring as there are Recipes that can be missed. On top of this, cooking all dishes will lead to powerful Quartz later on. 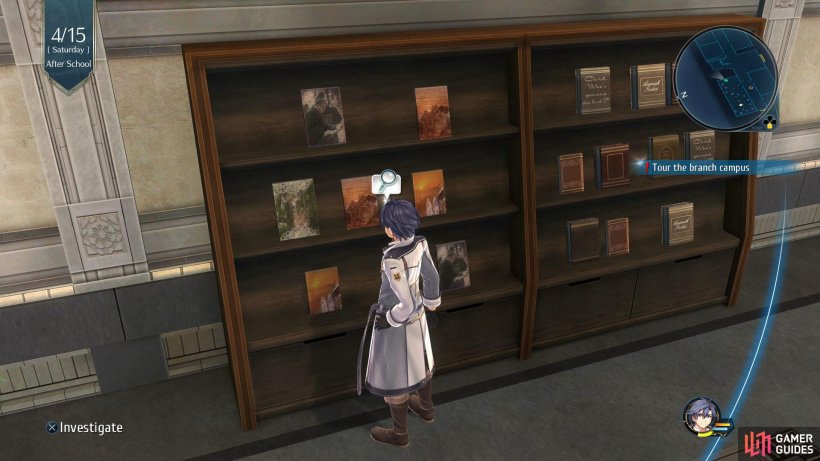 (1 of 2) Interact with the left bookshelf in the Library 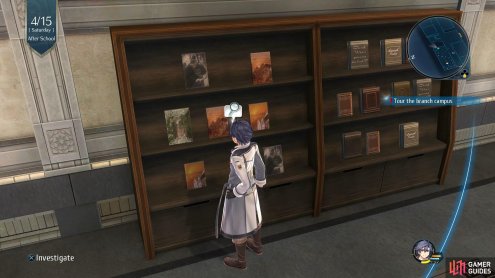 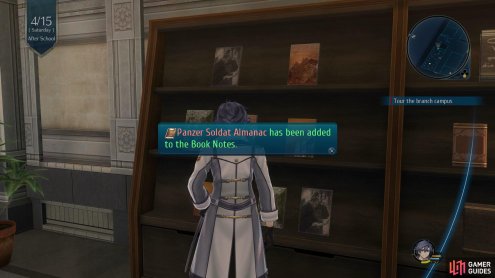 Interact with the left bookshelf in the Library (left), and you’ll obtain two new books for your collection. (right)

Proceed back into the School 1F and go into the Library to speak with Tatiana to acquire her Character Note. Before leaving, interact with the left bookshelf near the door to obtain the Panzer Soldat Almanac and Crossbell Province Travel Brouchure Books. Go up to the 2F and head into the Class VIII Combat Tactics Room to speak with Wayne to obtain his Character Note, then go into to the Class IX Military Finance Room to pick up both Pablo’s and Kairi’s Character Notes. Finally, speak with Towa out in the corridor and she’ll give you the Students Notebooks which you’ll now need to deliver to them tonight. 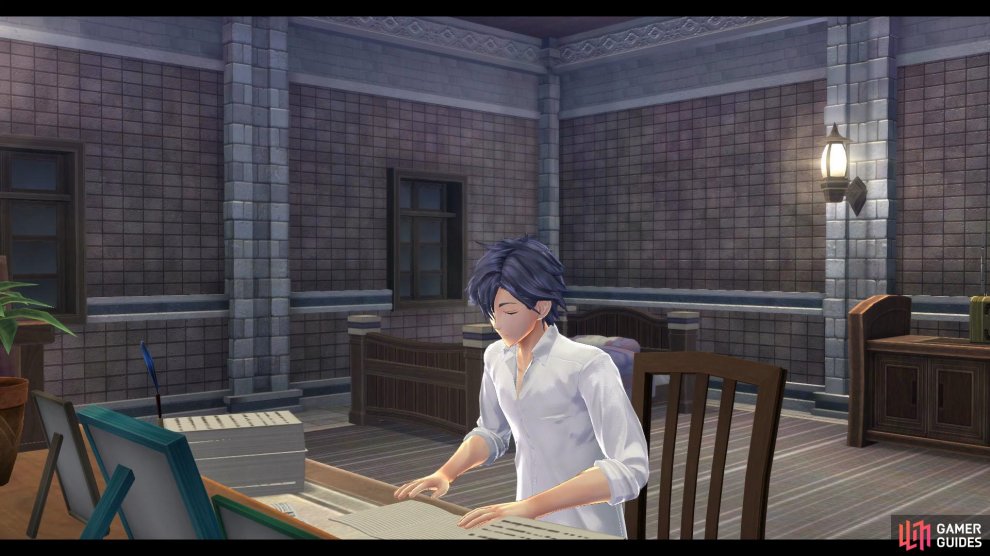 To wrap up your first day head into Principal Aurelia’s Office and speak with her and then talk to Juna at the Cafteria, followed by Altina on the Rooftop, and finally Kurt which is in second room on the right of the Pool/Training Ground. Exit the campus via the Front Gate and return to the dorm where you’ll view a short cutscene. Once the cutscene has ended you’ll have a tutorial on Branch Campus Enhancement. 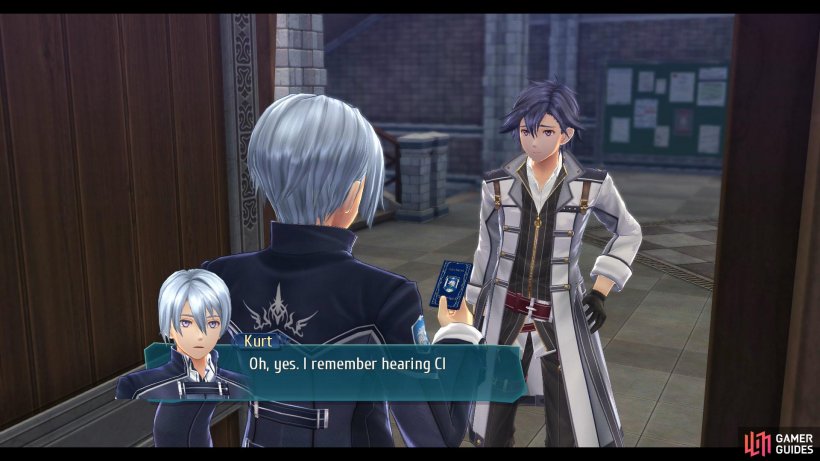 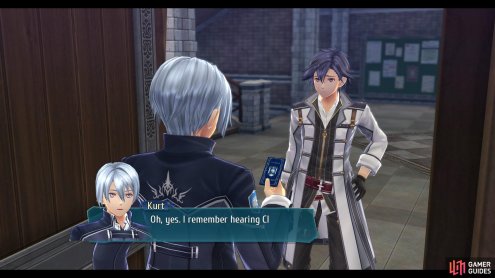 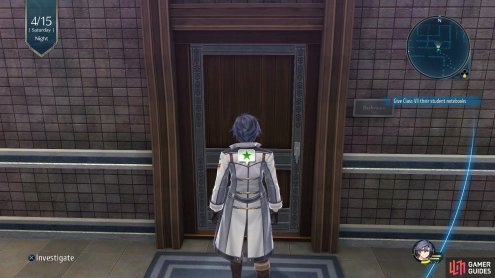 Hand the Notebooks to the Students in their rooms (left), and then head into the bathroom on 1F to view a cutscene. (right)

Once you regain control of Rean exit the room and head to the end of the corridor to find Towa’s room on the right, speak with her to see how she’s doing and then head into Aurelia’s room which is on the left side of the corridor. Head down to the 2F and speak to Kurt in the first room on the right to give him his Notebook, then enter Juna’s room which is the final room on the left side of the corridor to deliver her Notebook, finally, go down to the 1F and enter the Male Bathroom to view a Sub Event. After you’re done washing up you’ll be given some Coffee Milk as well as Campus Enhancement Rating +2.

Note: Campus Enhancement Ratings will level up by doing Branch Campus Quests or by Sub Events.

Note: Everytime you bathe, you will have 100 CP restored.

Head over towards the Female Bathroom and speak with Louise who is standing alone to get her Character Note, then enter the Dining room to give Altina her Notebook, with all this out of the way, go back to your room to call it a night.