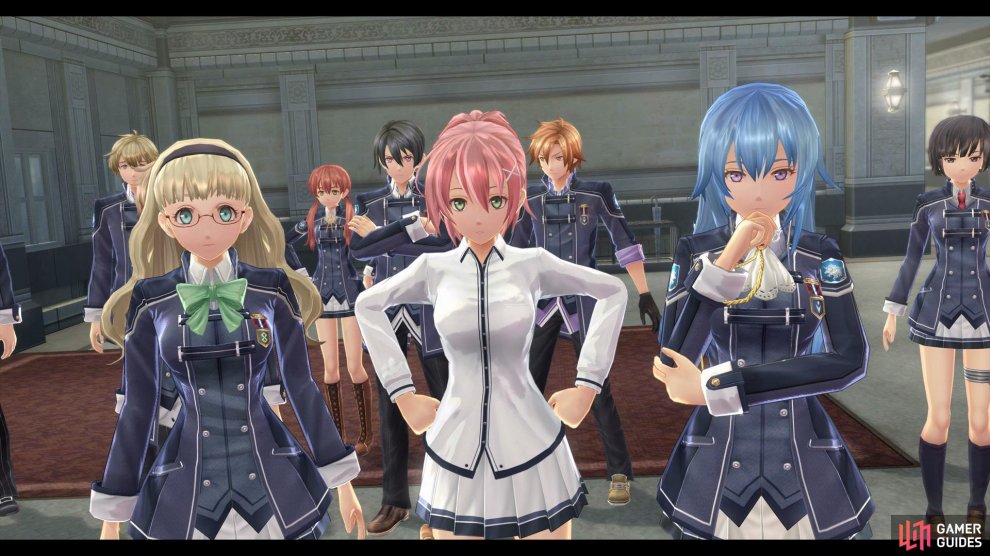 Head to the Keep

After completing your exams you get a nice long Free Day. Accept the Quests handed to you, then go into the Male Bathroom to view a sub-event with Principal Aurelia. Once you’re all dried up, go into Lapin Boutique and speak with Wayne to update his Character Note, then talk to Tatiana in Carnegie Books & Games to update her Character Note, now head into the chapel and beat Sister Rosine at a game of Vantage Masters to acquire the Fifnall Card. Finally, go into Radio Trista and speak to Munk to accept the Side Quest, The Radio Stars.

Side Quest: The Radio Stars 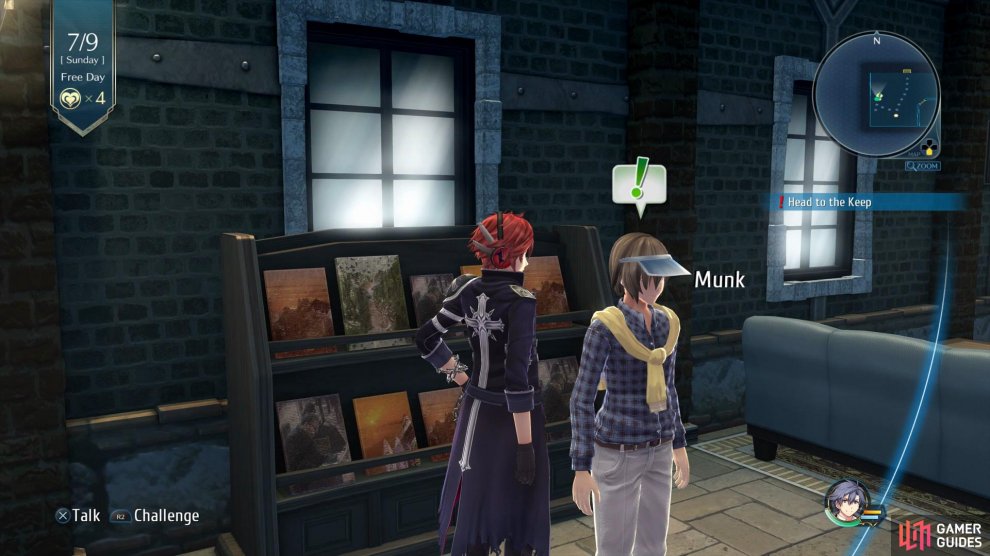 Once you’ve accepted this quest you’ll need to pick one of the following Students to appear in the Drama, Mint (Hangar), Becky (Student Store), Sister Rosine (Leeves Chapel), and Linde (Medical Office). For the sake of this walkthrough we’ll go through with Mint. After you’ve returned to Radio Trista you’ll view a scene and then you’ll need to choose how you’ll respond. For the first one you’ll want to go with the second choice, Thank Neun nonchalantly, and for the second you’ll want to go with the first choice, Urge her sternly. Once the recording has come to a close the quest will be completed. Upon completion you’ll gain a Holy Breath SR and 5000 Mira.

Head to the Recette Bakery & Cafe and speak with Liza to accept the Side Quest, Liza’s Gift. 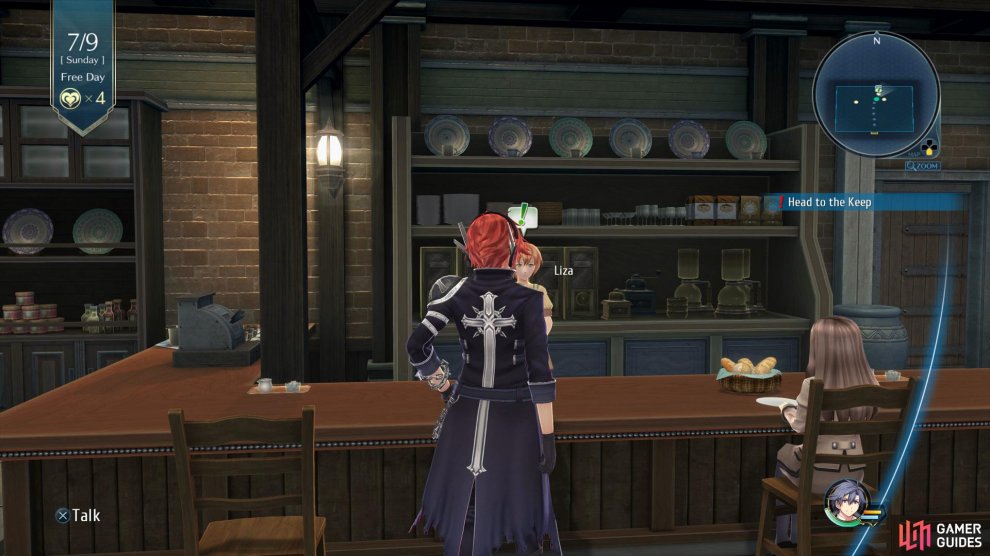 Once you’ve accepted the quest head to Leeves Station and examine the bench, then go into Leeves Chapel and speak with Father Henry. Finally, go to the Vegetable Garden and examine the tree to complete the quest. Upon completion you’ll get Special Pancakes x6 and 5000 Mira.

Go into Neinvalli Exchange and buy some cards for 5000 Mira to begin the Branch Campus Quest, is This Your Card?

Branch Campus Quest: is This Your Card? 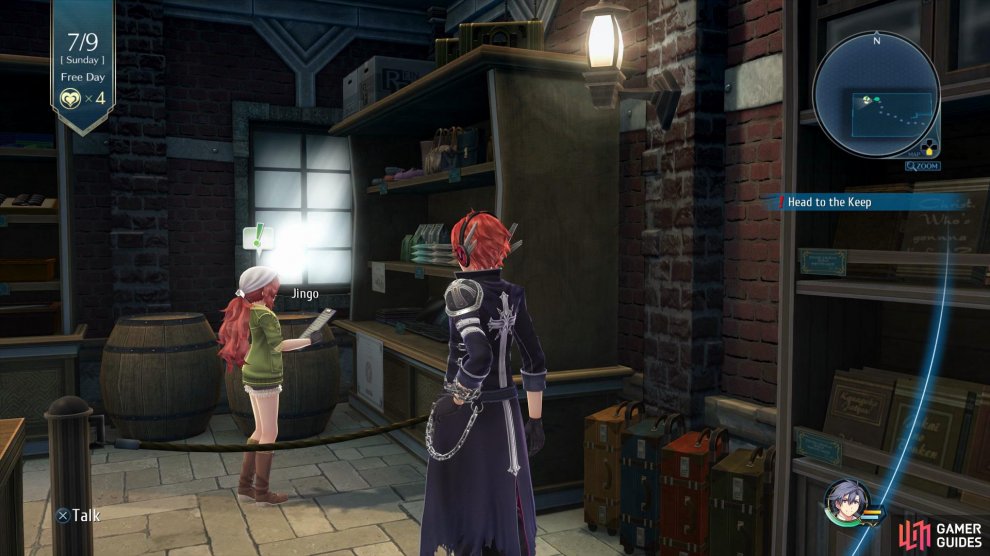 Once you’ve accepted the quest go into the Terminal Room and show the cards to Stark. Here you’ll want to refuse the 100,000 Mira to get his Character Note,5000 Mira, and 4 AP when you complete the quest.

Next up it’s time to use those four bonding points. Here you’ll want to choose Altina (Leeve’s East Bridge) to update her Character Note, Ash (Hangar) to update his Character Note and Gaius (Arcus II) to take part in a Training Session. This is just a short couple of rooms so there’s no need for a map here, especially due to there being no Chests. Likewise, there are two enemies (Killer Shmark, Scalyptera) to scan here for your Battle Book but they don’t count towards the Trophy and you’ll find the information in the Extra section of the book.

After the short training session you’ll want to use your final bonding point on any of the following students, Juna (Student Cafeteria), Jusis (Arcus II), and Towa (3F Dorms). Once you’re done spending your Bonding Points, head into the hangar and speak with Mint to begin Panzer Soldat Training. 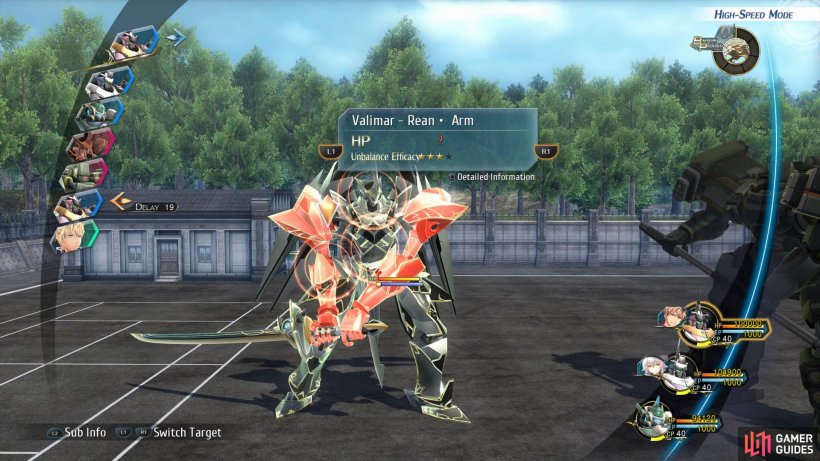 (1 of 6) When Valimar is in the Normal Stance you’ll want to focus on his arms.

As for the Hector Mk.II - Randy, you’ll want to hit his arms when he is in the normal stance, body when charged with weapon held horizontally and head when weapon is held vertically. 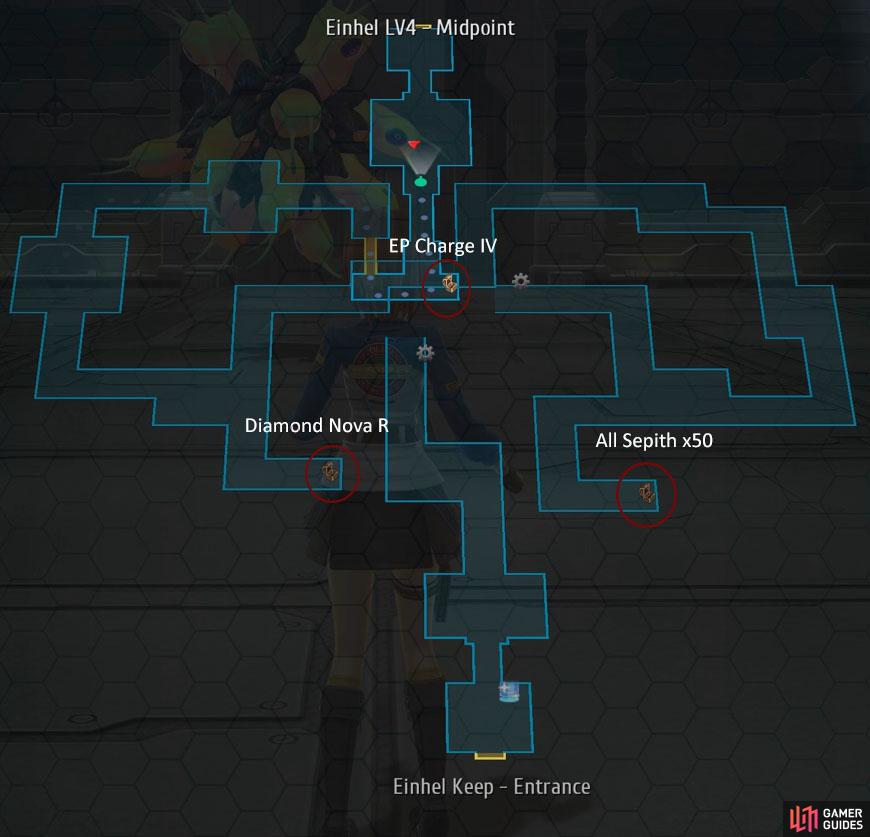 Follow the path and interact with the terminal to extend the bridge, then continue along and take a right to find a Chest that contains Diamond Nova R, this increases ATS+10/ADF+20 and gives you an 80% chance to inflict freeze on enemies. Proceed further into the keep and interact with the second terminal,then take the next left ahead to find a Chest with All Sepith x50 inside. Finally, follow the path along and climb down the ladder to find a Chest with an EP Charge IV inside. Go through the door into Einhell Keep Lv4 - Midpoint. 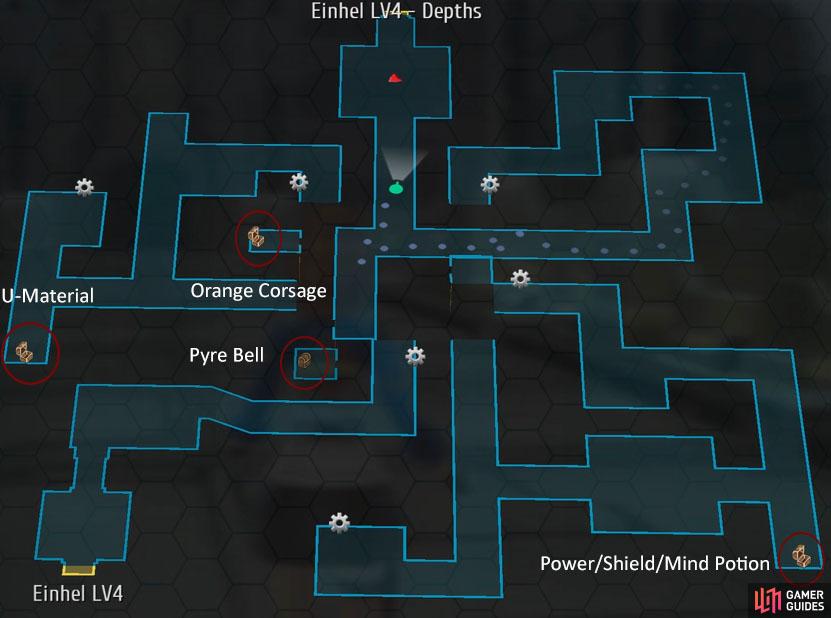 Note: If you climb down the southwest corner ladder you’ll find a Chest with a Pyre Bell inside.

Climb back up the ladder and follow the path along to find another Chest with a Power/Shield/Mind Potion inside. Continue along and take a left to find a terminal, interact with it and head across the path. Finally, make your way to the end and interact with the last terminal to reach the Einhell Keep Lv4 - Depths. 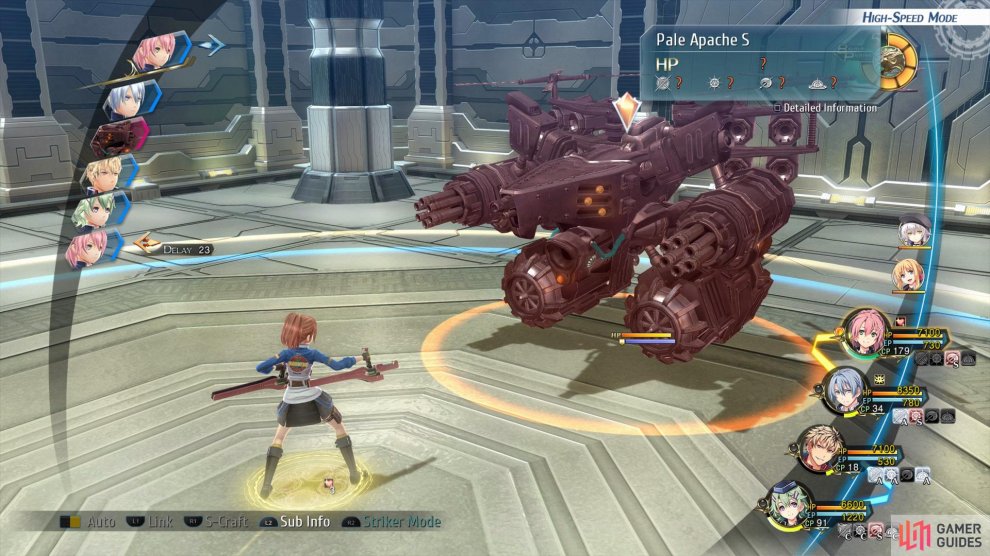 Begin the battle by scanning the boss, then activate Sledgehammer and focus on getting it ino the break status. Once you’ve done that, activate Wind Blade to put a delay on the enemies turn and continue using normal attacks to take out it. However, if it manages to take another turn, then use any available S-Crafts to finish it off.

Upon completing the Einhell Keep Lv4 you’ll gain a Lunar Gyre and 5000 Mira. After the cutscene has come to a close you’ll battle against Viscount Arseid and Aurelia. 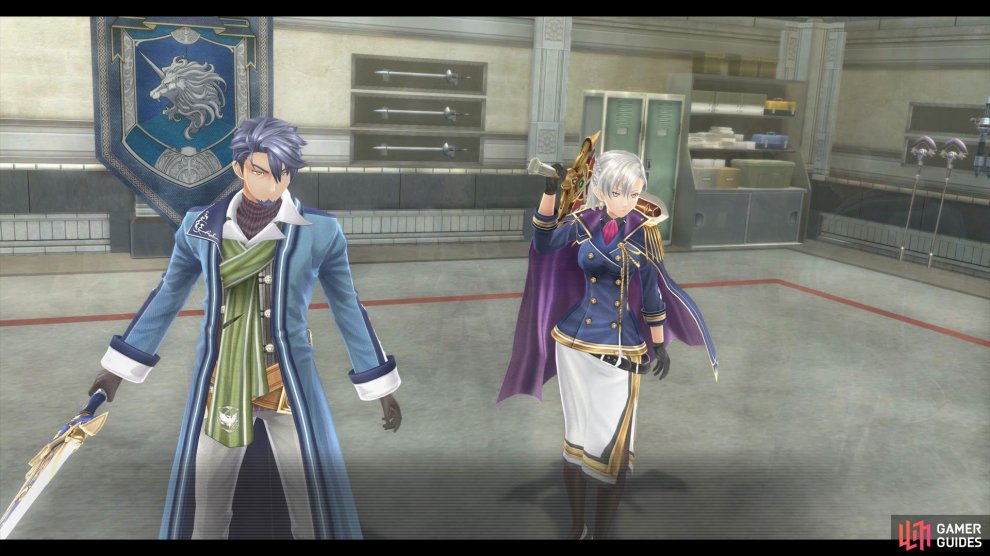 Note: Make sure to equip the Domination Quartz on Rean before entering this battle, as it will double the damage of your first S-Craft/Craft.

Begin the battle by scanning them, then use all of the available S-Crafts to deal a lot of damage and put them into the Break Status. Now use Lightspeed Flash to put a delay on both Viscount Arseid and Aurelia and continue using normal attacks until they’re defeated.

Head back to the dorm and rest

Once you’ve beaten Viscount Arseid and Aurelia, head into Radio Trista and speak with Linley to update her Character Note, then go into the Hangar and beat Professor Schmidt at a game of Vantage Masters to acquire the Witch Card. Go into the dorms Male Bathroom to view an event with Tita, then go up to the 3F Clubhouse and speak with Altina to begin the Branch Campus Quest, White-Hot Swimming Competition 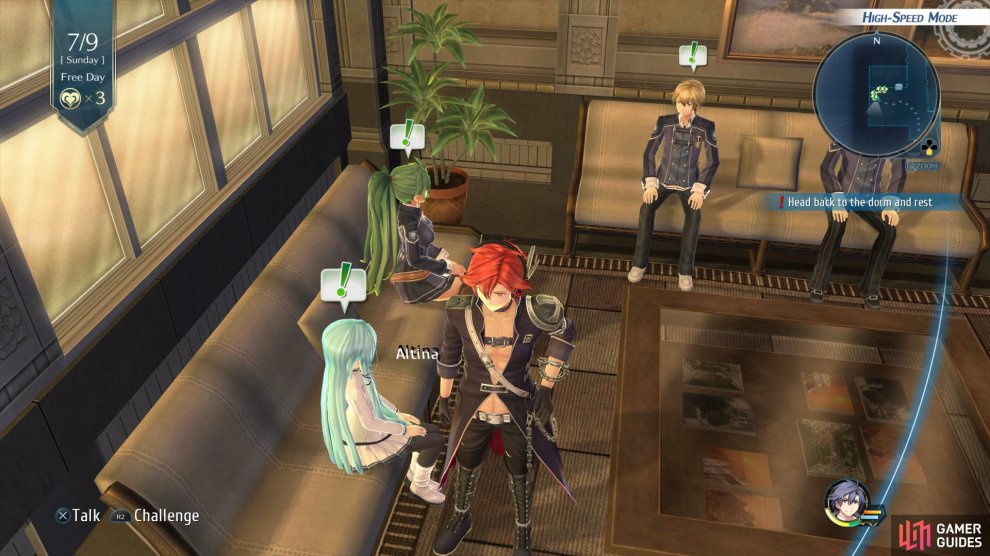 In order to complete this quest you’ll need to beat the following people in a race, Wayne, Stark, Leonora, and Principal Aurelia. Here you’ll need to wait until the circles overlap and then press either the [Triangle or Circle] Button to go faster. Upon completing the quest you’ll gain Academy Swimsuit x4/Instructor’s Swimwear x2 and 5000 Mira.

Head into the Firing Range and speak with Maya to begin the Branch Campus Quest, Maya’s Malaise. 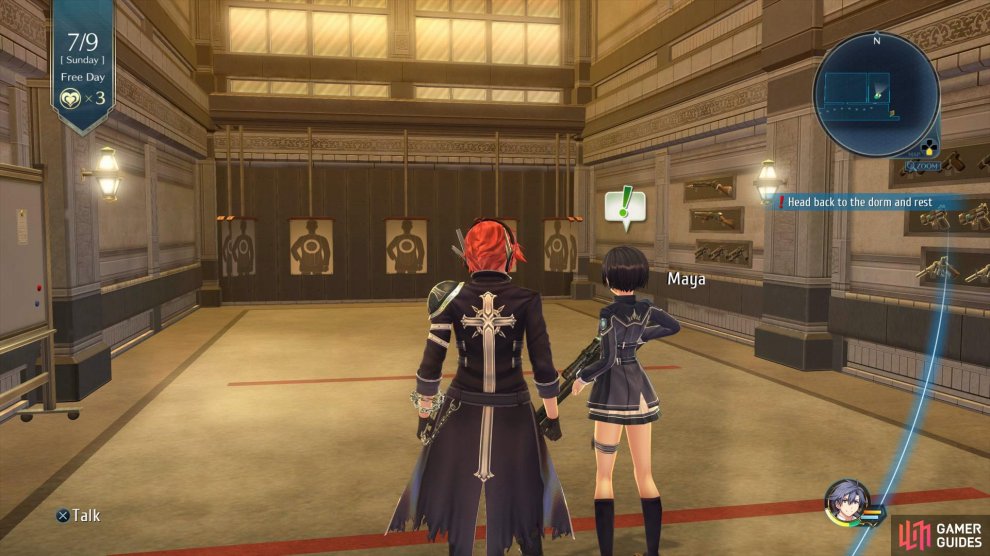 Once you’ve accepted the quest, speak with Altina or Leonora in the Swimming Pool room, then talk to any of the following girls twice in the Academy Field, Louise, Juna, or Jessica. Now speak with Sidney in Lapin Boutique and Randy in the Dorms Training Room. Return to Maya to complete the quest. Upon completion you’ll get 5000 Mira.

With the quests completed you’ll want to use up those two Bonding Points. To begin, you’ll want to use one on Emma (Arcus II), as that will give you an updated Character Note, then use the second one on Sara (Neinvalli Exchange) to participate in a training session at Einhel Keep. This is just a short couple of rooms so there’s no need for a map here, especially due to there being no Chests. Likewise, there are two enemies to scan here for your Battle Book but they don’t count towards the Trophy and you’ll find the information in the Extra section of the book.

Finally, return to your dorm room to rest up. 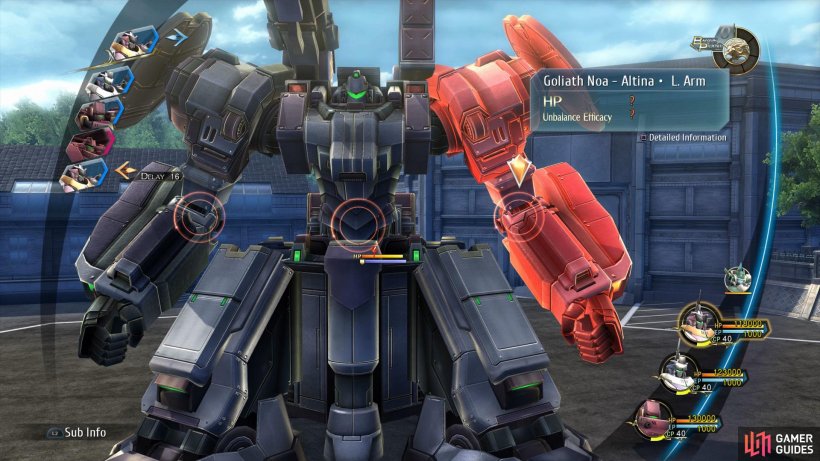 (1 of 4) When the Goliath is in the Normal Stance you’ll want to focus on the Left Arm.

After the students have seen the results you’ll take part in a little bit of Panzer Soldat Training. Here you’ll need to get this opponent down to 30% HP in the first battle and then down to 0% in the second. In order to do this you’ll want to hit the following weak points. 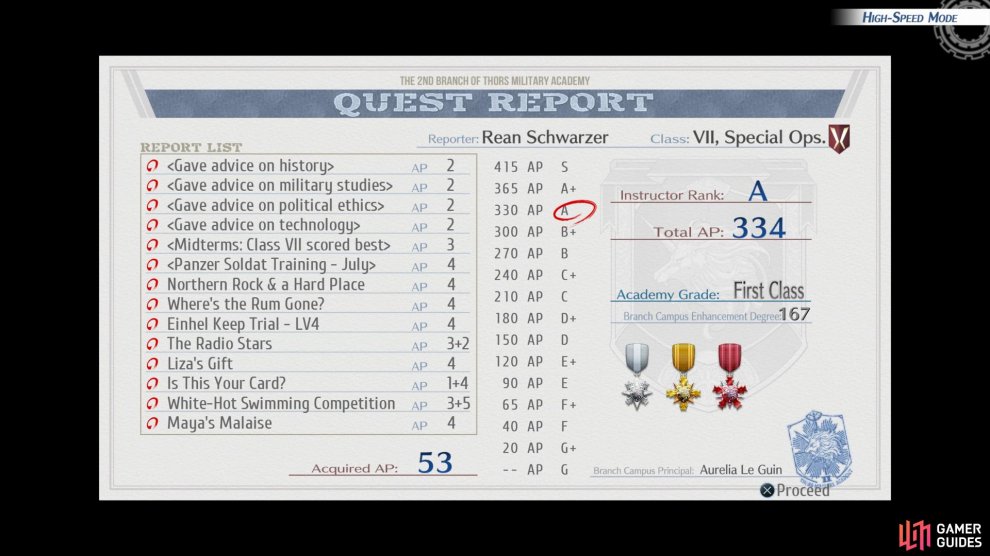