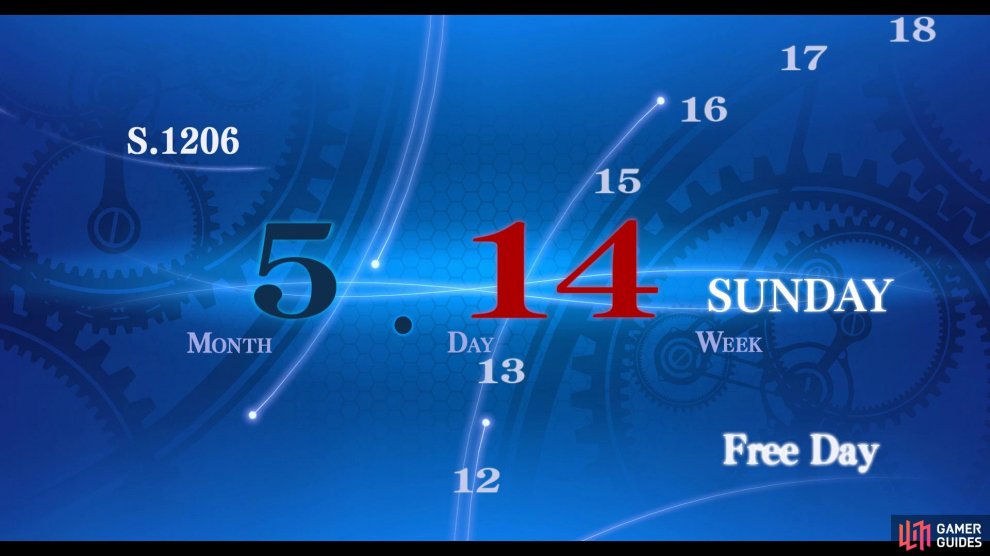 Head to the Keep

Once you’ve regained control of Rean, head into the Male Bathroom to view an event with Musse, after your little chat has come to a close your Bond with her will increase. Next up you’ll want to spend those three Bonding Points, use the first one on Millium through the Arcus II as she is missable, after the scene has ended you’ll gain her Character Note.

Choose Laura (via the Arcus II again) for your second point, this will lead you to Einhel LV1 - Sub. This is just a short couple of rooms so there’s no need for a map here, especially due to there being no Chests. Likewise, there are two enemies (Attack Dog and Agilatran) to scan here for your Battle Book but they don’t count towards the Trophy and you’ll find the information in the Extra section of the book. It goes without saying but you’ve fought the enemies here before albeit these have slightly higher stats. Laura’s Bond will increase following this short Bond Event and then feel free to spend the final point on anyone else available. 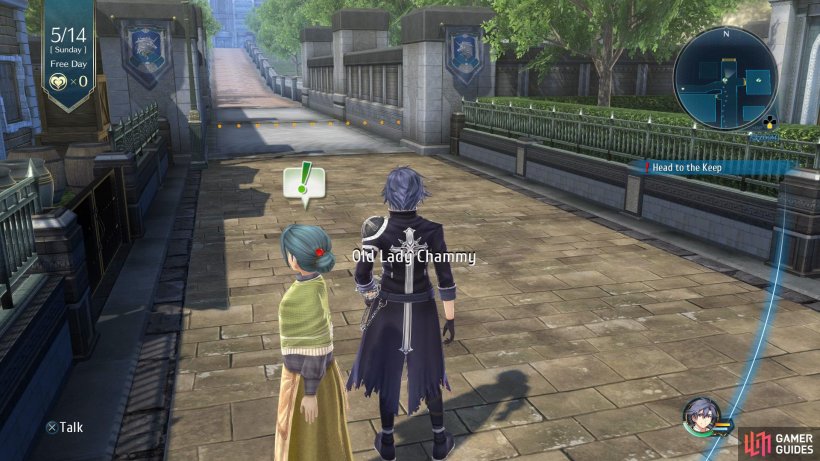 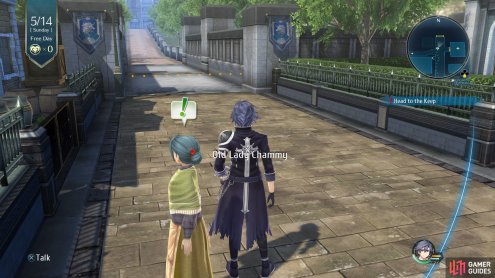 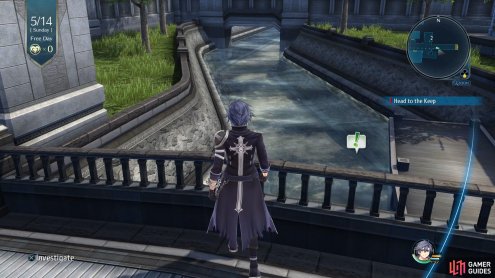 Speak to Old Lady Chammy to the north of Town to begin the quest (left), and then after you’ve spoken to everyone, interact with the bridge to complete the quest. (right)

Speak with Old Lady Chammy in Leeves to accept this Quest and then speak with Old Man Rod in Nyo-Sui-An Imports to see if he knows anything, now exit the shop and head right until you reach a bridge, interact with it to complete the Quest. You’ll given a Red Emblem as a reward, this prevents Freeze, Pretrify, and Faint when equipped.

Before proceeding further through the day, it would be a good idea to pop into Neinvalli Exchange to upgrade your recently acquired Red Emblem to a Passionate Rouge, this will increase your strength by a 100 as well as being able to prevent Freeze, Petrify, and Faint, equip this to Rean. Once you’ve saved up some more U-Materials you’ll want to work you way up and purchase the Evergreen, this increases Accuracy by 100% and Evasion by 15%, equip this to Kurt. 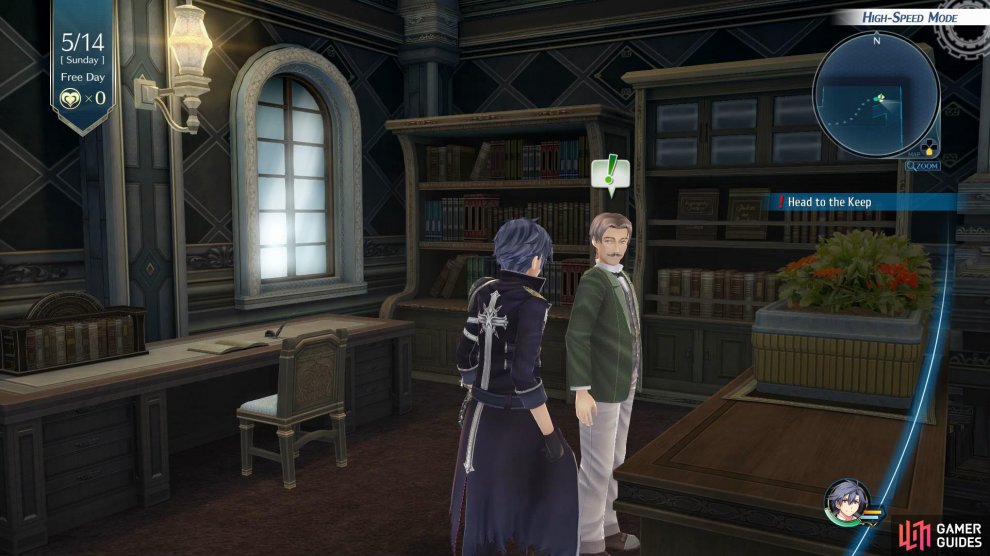 Head into the Mayor’s Home in Leeves to accept this Quest and then speak with Mint in the Hangar. Unfortunately, this job is going to require a few items, so talk to Tita in the Vegetable Garden first, followed by Pablo in the General Art Room and finally Old Man Rod in Nyo-Sui-An Imports. Return to the Hangar and give the items to Mint to complete the Quest. You’ll be given a Vitality Droplet and 3,000 Mira as your reward. 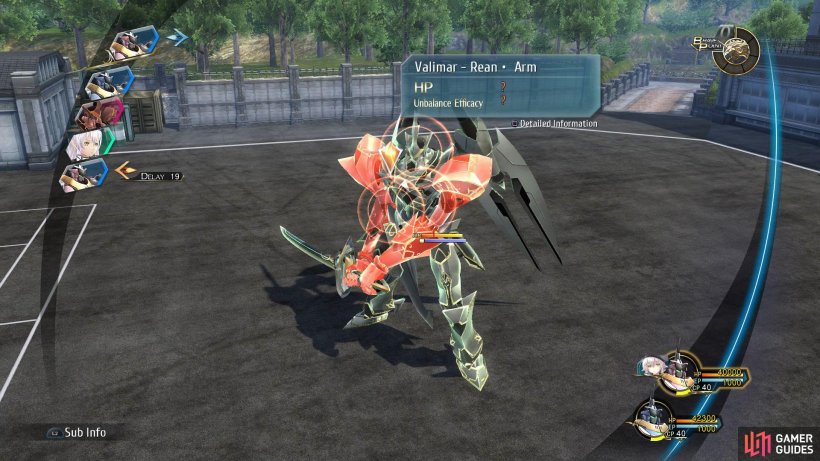 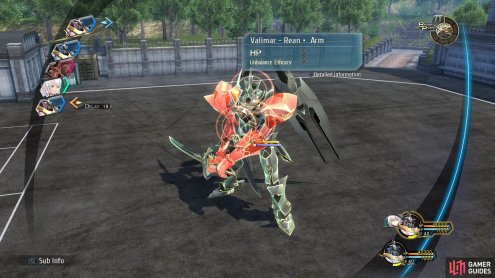 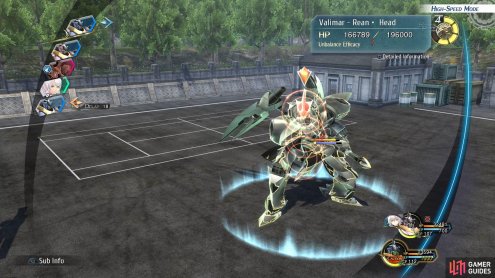 Go to the Hangar and speak with Mint to begin your first optional Panzer Soldat Training. Your goal is to get Valimar’s HP down to 30%. Valimar has two weak points that you’ll to need to hit in order to complete this training exercise. When he is in his Default and Charged Stance you’ll want to hit his Arm and then when he brings his Sword down to his waist you’ll want to hit his head. 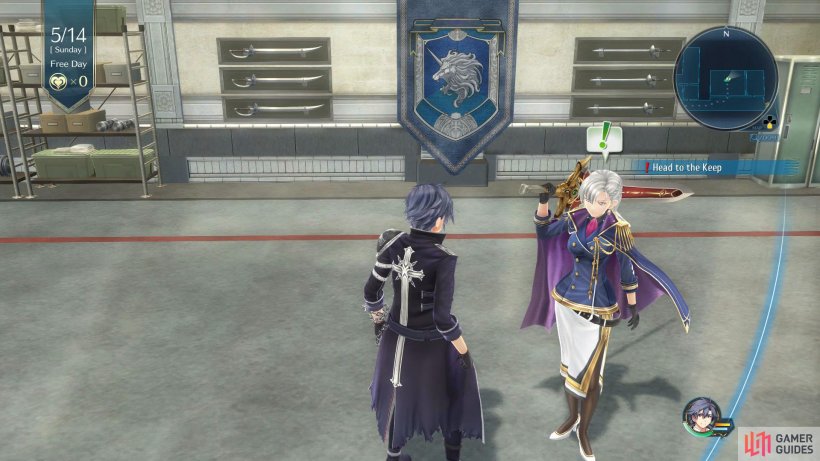 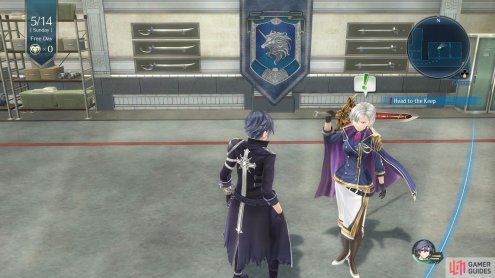 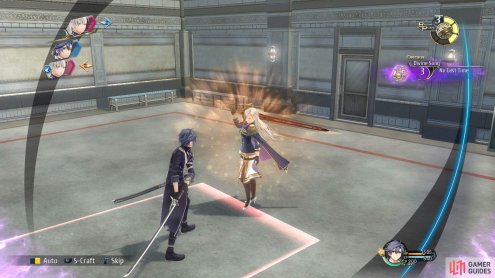 Head into the Training Hall and speak with Aurelia to begin the quest (left), and make sure to impede her Charged Attacks as they deal a lot of damage. (right)

Head into the School’s Training Hall and speak with Principal Aurelia to begin this Quest, you’ll now participate in a duel where you’ll need to get her HP down to 70%. To do this you’ll want to activate Raging Fire to increase your damage by 20% and then use your S-Craft. If she begins charging up an attack make sure to use Crimson Slash to Impede it. Upon victory you’ll gain STR & DEF +5 and 5000 Mira. 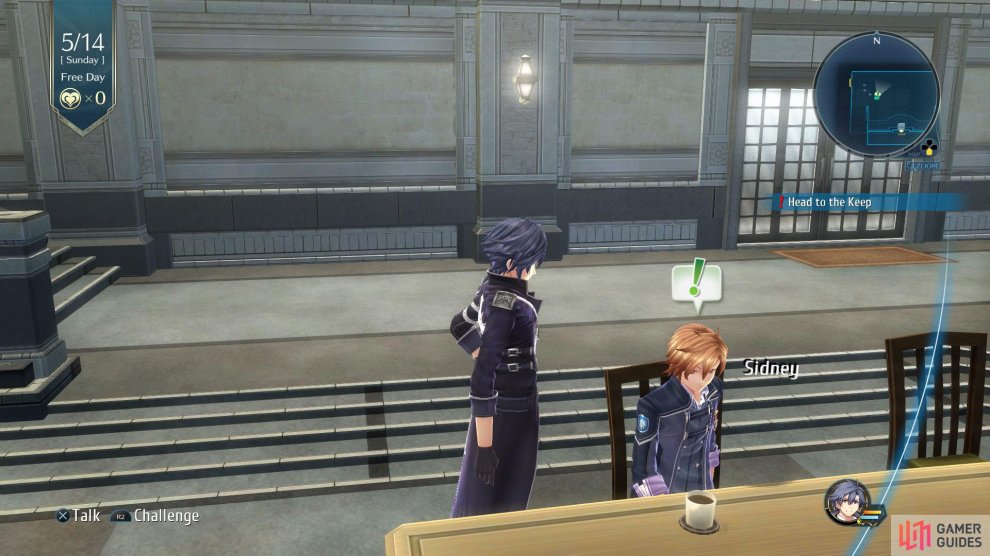 Speak with Sidney in the Student Cafeteria to begin this quest.

Make your way into the Student Cafeteria and speak with Sidney to begin this Quest and then talk to Randy in Carnegie Book & Games to find out some more about Sidney’s strengths. Now speak with Maya in the Tea Ceremony Club to complete the Quest. Finally, before you go to the Keep, head to Recette Bakery & Cafe to find Louise who you can challenge to a game of Vantage Masters, defeat her to obtain Dullmdalla x3. 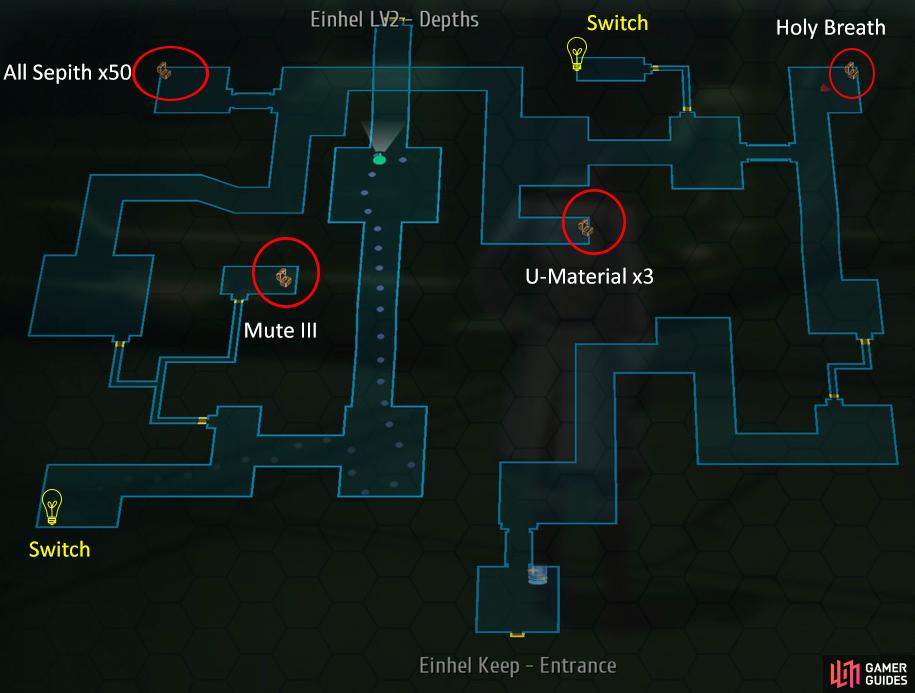 Head to the Keep and speak with the Professor to begin this trial and then take the lift up to LV2. Here you’ll be given two new Brave Orders, Sledgehammer and Wind Break. Sledgehammer gives you 300% Break Damage for 4 turns when active and Wind Break offers 70% Delay. Continue to follow the path around and pass the first intersection to find the first Chest, inside will contain a Holy Breath, this will allow you to perform a Medium Heal at a large range. Go back the other way and go right, crawl through another vent to find a computer, interact with it and then use the bridge to get across. 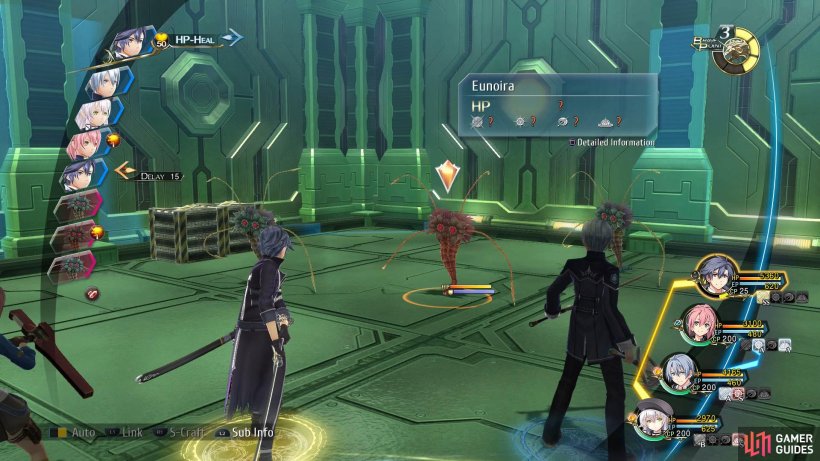 Take the left path first to find the second Chest which contains U-Material x3 and then follow it around to the right, head into the small room and you’ll find another Chest that contains All Sepith x50. Enter the third and final vent and take the left path to find the last Chest that contains Mute III, this will give +25 STR and a 25% chance to Mute an enemy. Once you’ve made it out of the other side of the vent, take two right turns and you’ll see a computer, interact with it and you’ll be able to cross the bridge to reach Einhel Keep LV2 - Depths. Use the Orbment Charging Station++ to restore your HP/EP before facing the boss, Stratos Diver. 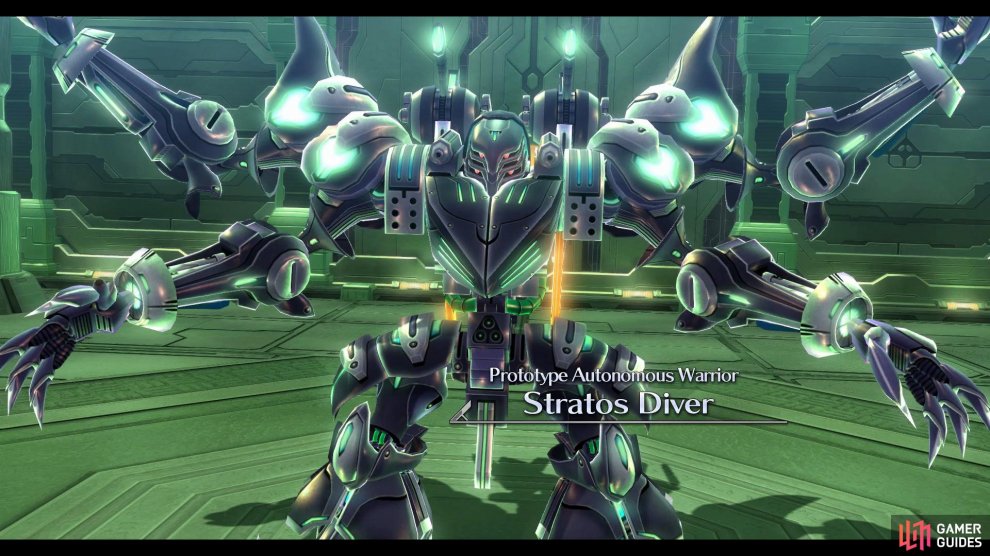 Note: The Sledgehammer and Wind Break combo will be used alot in your boss fights throughout the game, as it allows you to easily break the enemy and then have a fair few turns in a row.

Stratos Diver hits harder than anything you’ve fought so far but the two new Brave Orders you received earlier are set to be a mainstay for the majority of the game. Juna’s Sledgehammer boosts Break Damage by a massive 300% and will allow you to Break the enemy a lot easier than before while Kurt’s Wind Blade will delay the enemy once it’s been broken. As such, begin the battle with Sledgehammer activated and then use an S-Craft or two to take out the Diver Bits leaving you with just Stratos Diver. Make use of Juna’s Gemini Blast to lower it’s Defense and then get to work on breaking it. Once you do, quickly switch over to Wind Blade and make use of your S-Crafts. As for Stratos Diver itself, Hyperactive Discharge is a deadly attack that will hit all allies and inflict Mute, revive any victims and remove Mute instantly. It’s other main attack, Tetra-Luminous Divider hits an arc in front of it so be sure to reposition your characters to avoid everyone getting hit by it.

After the battle has been cleared you’ll receive a Heat Up SR (Restores CP and offers EP+45/STR+12) from the enemy and given a Moon Lens, this will allow you to see data on enemies that haven’t been scanned as well as being able to see Chests/Enemy Locations. Exit the Keep to view a couple of scenes and then you’ll be ready to tackle the evening. 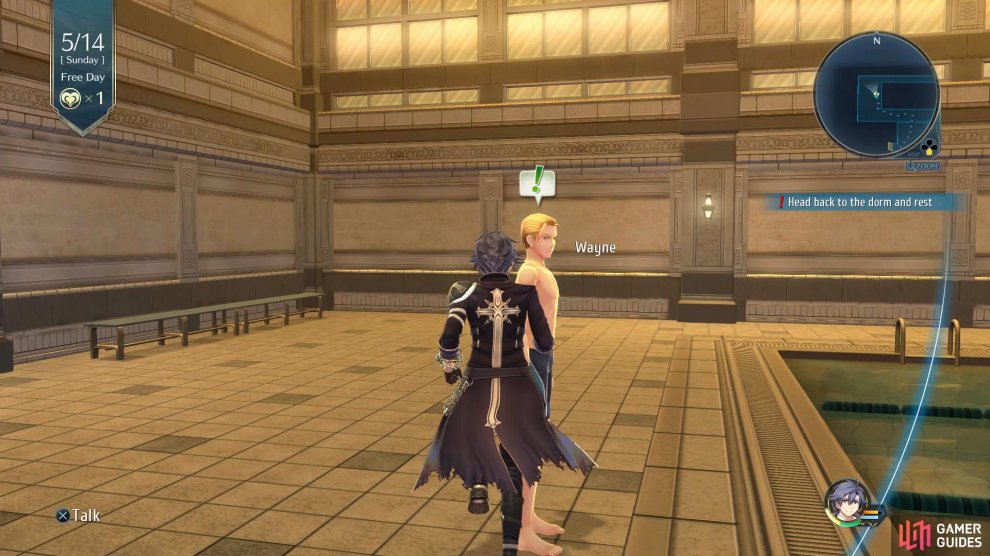 Go into the Swimming Pool room and talk to Wayne to begin this Quest.

Once you regain control of Rean, head into the Swimming Pool and speak with Wayne to begin this Quest. In order to complete this quest you’ll need to help Wayne beat Rean in a race, so you’ll need to wait until the circles overlap and then press either the [Triangle or Circle] Button to go faster. Upon completing the quest you’ll gain a Character Note and 3000 Mira.

Warning! You need to actually beat Rean for the additional 2 AP but fret not because you can retry as many times as you like until you beat him.

Make your way to the entrance of Barney’s Tavern & Inn to speak with Munk and challenge him to a game of Vantage Masters, upon winning you’ll gain Uptide x3. Go back to the Dorms and head into the Male Bathroom to watch an event with Altina, this will increase your bond with her. Now go and speak with Jingo in Neinvalli Exchange to get her Character Note.

Finally, use your Arcus II to speak with Elliot and use your Bonding Point on him to get his Character Note and a bond increase. 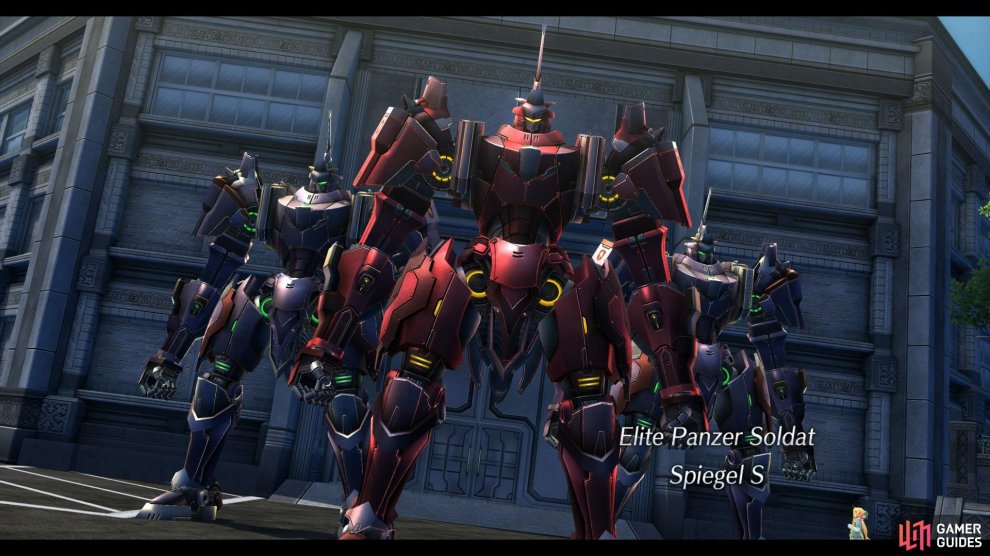 For Fritz you’ll want to focus on his Arms when he is in the Default Stance and Charged Stance. Finally, you’ll want to hit Ada’s Head when she is in the Default Stance and Body for her Charged Stance. Make sure to use Crafts with Impede when they’re charging up an attack and use any Repaire Stones to heal up if need be. You’ll want to focus your attention on Ada first and leave Cedric for last due to the differing amounts of HP the three Panzers have. Focus on building up your BP and unleashing Unite Attacks to deal more daamge at once, this is more effective than using Finishers. After the battle has been won you’ll receive you’re Quest Report, along with a Dragon Vison and a Silver Star Lionheart Medal. 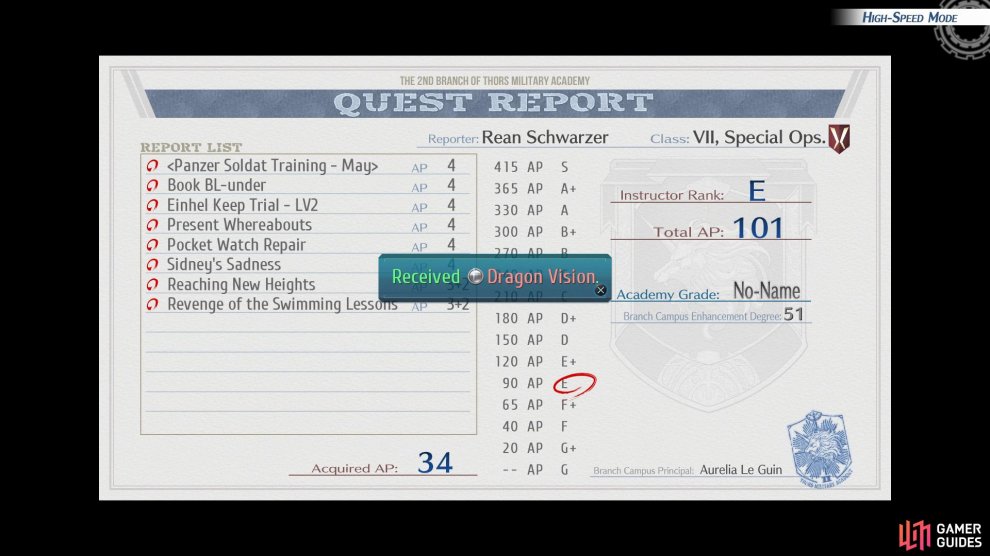