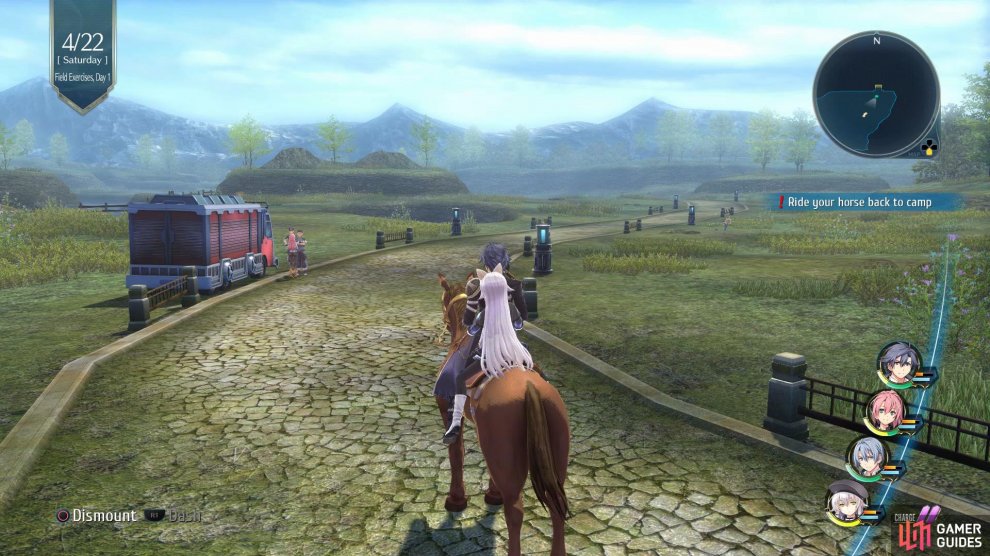 Ride your horse back to camp

Go to the Residential District and enter the Luna Crest apartments, now speak with Elma on the second floor to obtain the Heartless Edgar - Chapter 2 Book. Exit the apartments and fast travel to South Sutherland Highway to meet up with Celestin, you’ll now be given your very own horse to take on your adventures, so ride it back to the Ex Camp for a cutscene. 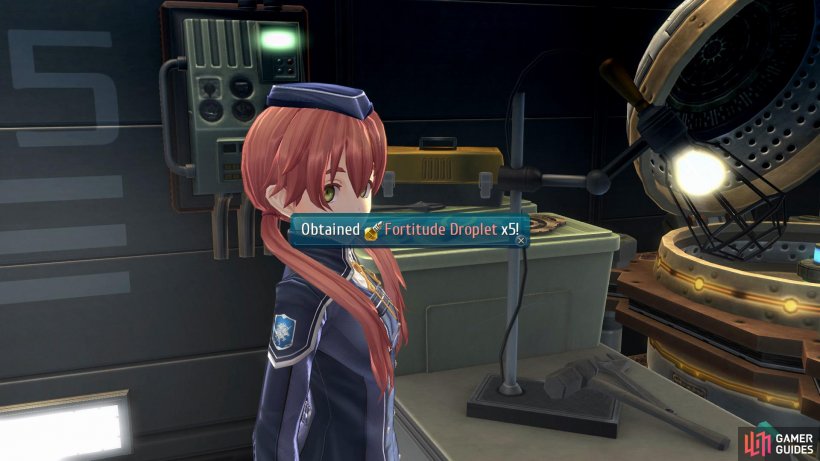 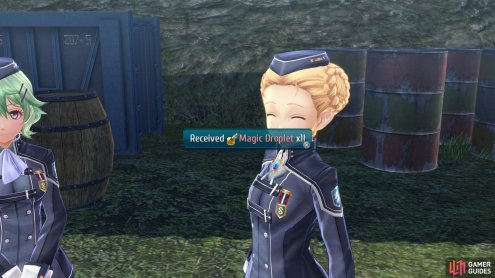 Speak with Sandy in Car 5 to give her the Herb Seeds and she’ll give some Fortitude Droplets (left), now give Tatiana the updated Notebooks to receive a Magic Droplet. (right)

Once the scene has concluded Kurt will learn the S-Craft Ragna Strike, now pop into Car 5 to give Sandy the Herb Seeds you found earlier and she’ll repay the favour with Fortitude Droplet x5. Make your through until you reach Car 3 and speak with Freddy to obtain the Amino Gel for catching seven different fish. Before leaving, speak with Tatiana and show her the Book Notes to acquire a Magic Droplet and an increase in your Campus Enhancment Rating. 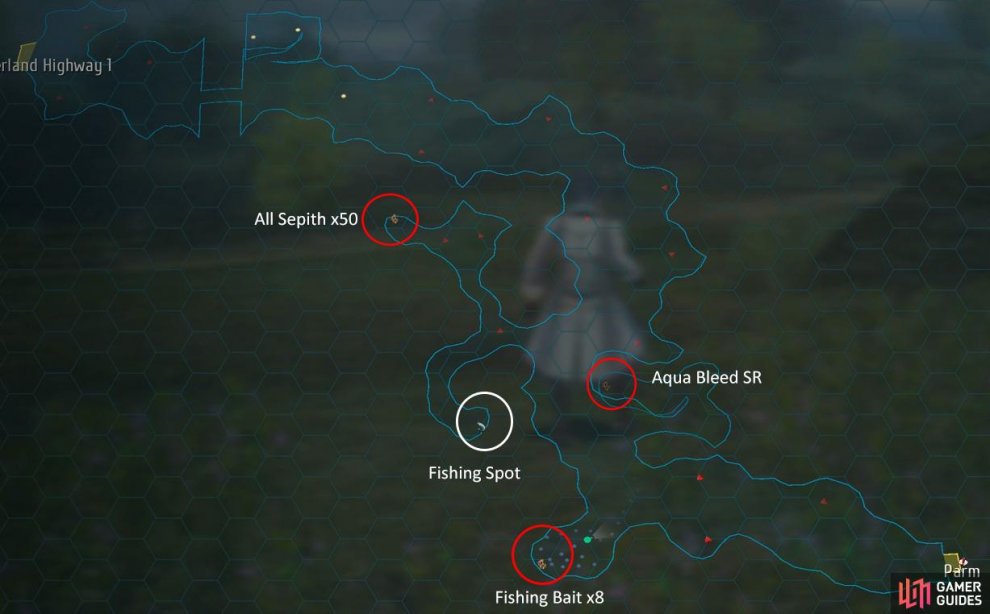 Go back out into the South Sutherland Highway 1 and follow the path around to the right to find the final Chest in this area that contains U-Material x3. Proceed into South Sutherland Highway 2 and keep following the path until you cross the bridge, now go down the hill on the left to get brought up to speed on the train. Once you’ve regained control you’ll want to keep following along until you see an opening to the right and then go down it to find a Chest that contains All Sepith x50 and a Fishing Spot. Continue further south and follow the path over to the left to find another Chest that contains an Aqua Bleed SR, a rather unremarkable Quartz that deals moderate Water damage.

Head back up the hill and make your way over to the opposite side to find another Chest that contains Fishing Bait x8, then finally go into Parm. 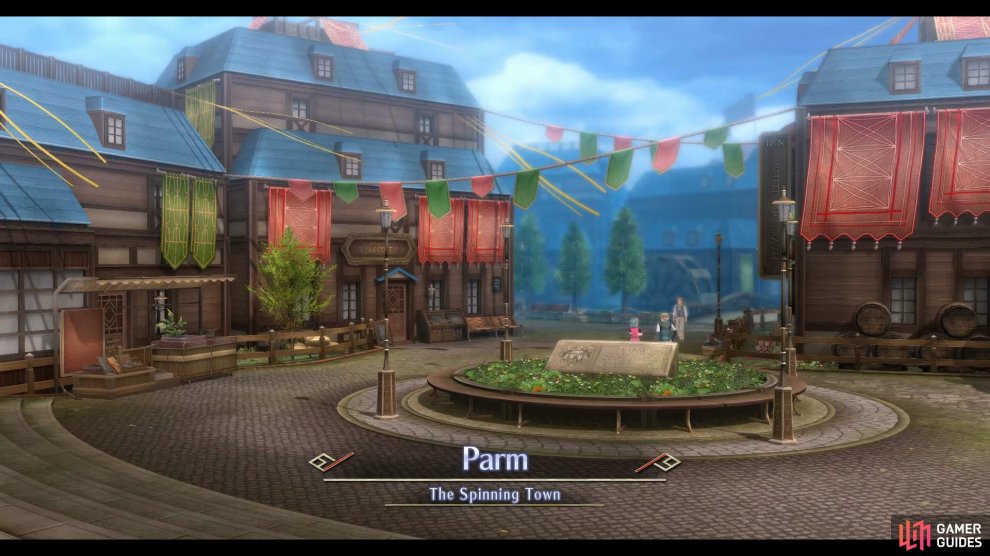 Head into the White Footpath Tavern & Inn to speak with Bertrand and then speak to him again to purchase Hearty White Stew to obtain it for your Recipe Book, now go into Jerome’s General Store to catch up with Louisa.

Tip: Every time you gain a new recipe you’ll want to create the best and worse version of it as soon as you can, this will make it less tiresome for you at the end of the game as you wont need have to spend a few hours crafting each recipe for the Trophy. 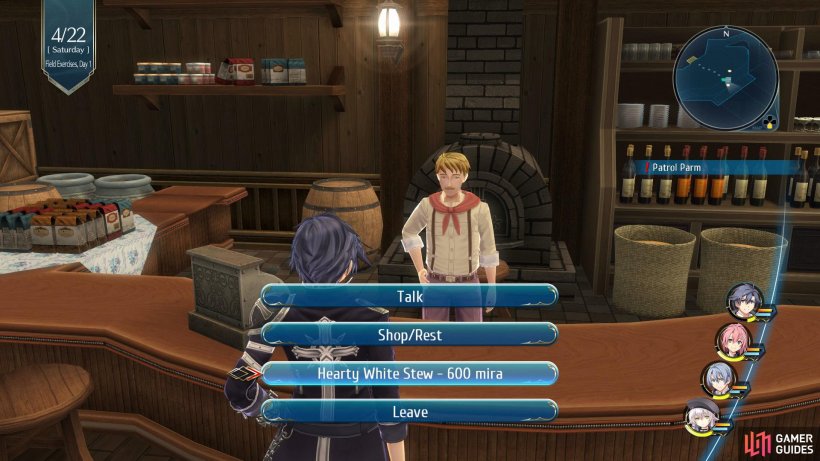 (1 of 3) Go into the White Footpath Tavern &amp; Inn to purchase the Hearty White Stew Recipe

Quickly run into Dwight Arms & Orbal Factory to open any slots and then head into the Parm Chapel to speak with Mint, then go back outside and challenge Clover to a game of Vantage Masters, upon winning you’ll receive Zamilpen x3, now go into the Vander Training Hall. After the reunion head back to the entrance and purchase the Quilted Pouch (this is a Gift for Millium that boosts her STR and DEF) from Iris and then speak with Reggie in the Manager’s Residence to accept the Prepare to Dye Side Quest. 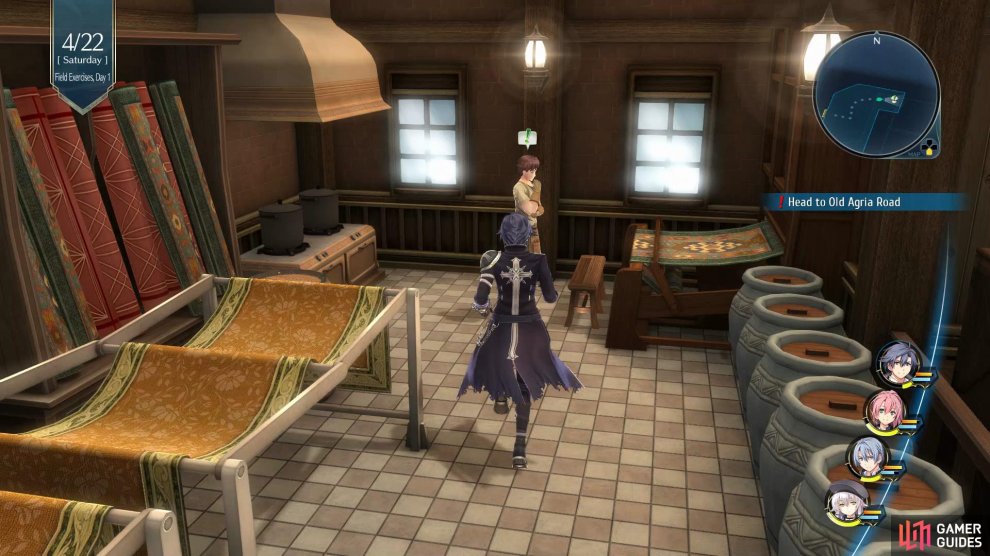 Speak with Reggie in the Manager’s Residence to begin the Prepare to Dye Side Quest.

Side Quest: Prepare to Dye

Return to the Cathedral Square and head into the Albion Garden Department Store to purchase a Rainbow Rubia from Luxury Food Sterry Farm’s store, now go back to Parm and go out the northeast exit to reach Old Agria Road. 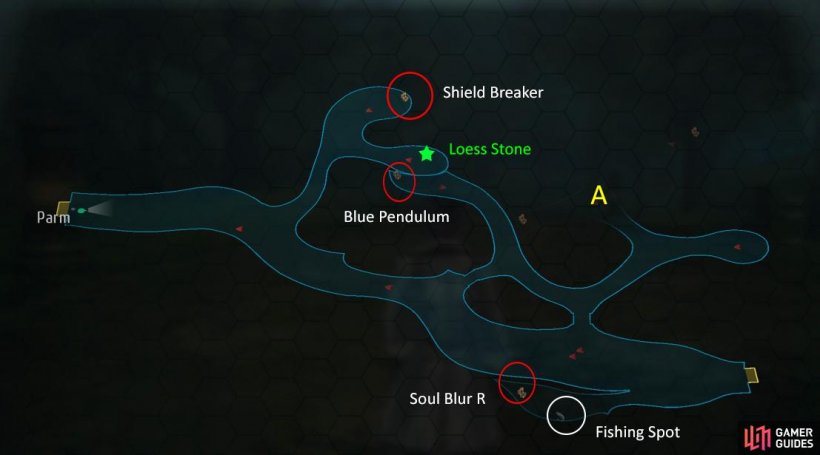 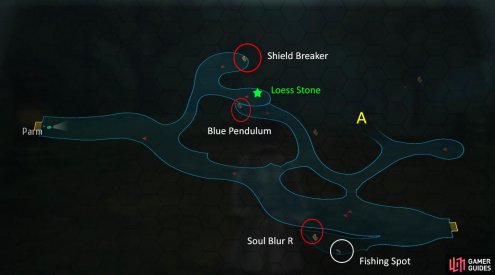 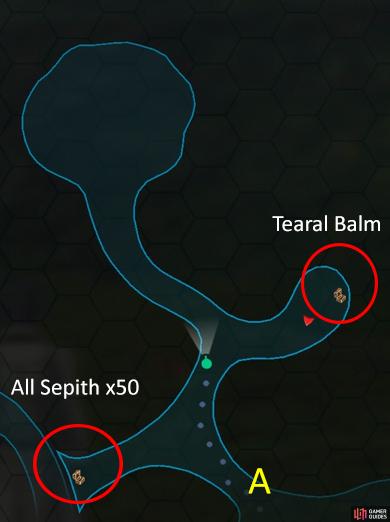 Head forward a little and then take the left path up to find a red Chest that contains a Shield Breaker, this will give +10 STR and the ability to lower the enemies defense with the use of Crafts or Attacks, now turn around and go left again to find the Loess Stone. Go back down to the main path and take the stairs up to the left to find another red Chest that contains a Blue Pendulum that prevents Poison, Blind and Burn. Make your way back to the main path again and you’ll see a section off to the right, here is a Fishing Spot that you can use to catch the Green Arowana (Rod Level 4), and a red Chest that is holding a Soul Blur R, this Quartz is unremarkable as an Art but the SPD+3 it offers is nice if you can spare a slot. 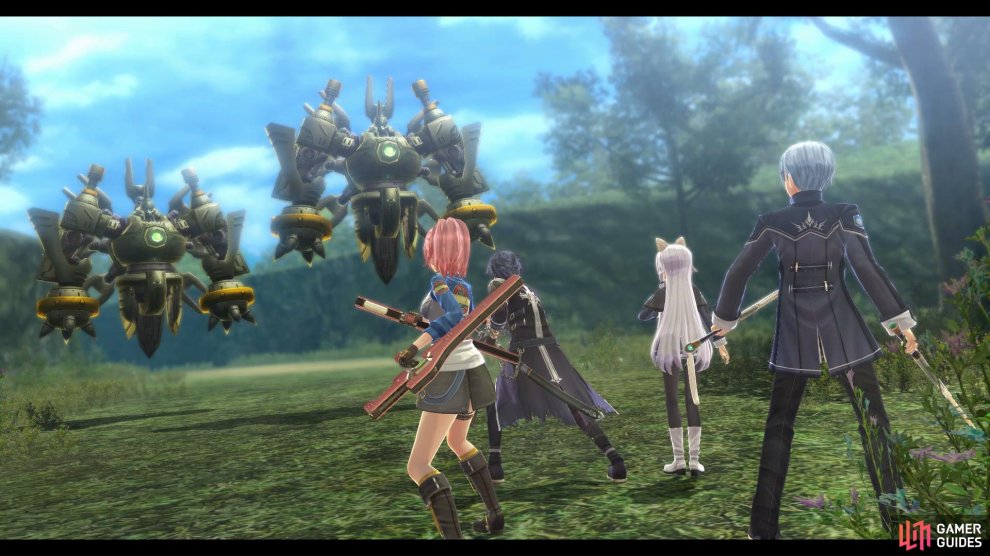 Quickly use a Battle Scope on one of the enemies to add it to your Battle Book and then use Altina’s Brave Order, Ebon Crest. During this battle you’ll want to make sure you have this active at all times as these enemies deal a lot of damage with each hit. Use any Crafts that have a high Break rating to get their bar down quickly and then use any S-Crafts you have available to take them out.

With the Zephyranthes taken out you’ll want to head back into Parm and speak with Reggie in the Manager’s Residence to compelete the Prepare to Dye Side Quest and acquire the Gold Hair - Juna. Exit Parm via the Southwest exit to enter the Parm Byroad. Once you’ve arrived you’ll be able to find a Fishing Spot along the left path and a Chest along the right which contains U-Material x3. Now continue along the left side of the byroad and you’ll find two Chests that contain a Force Seal which prevents Stat Down and some Strawberry Seeds that you’ll need to give to Sandy when you see her again. Ignore the right path for now and continue on down to view a scene with Annabella, now follow the path along to the right to find a Chest that contains a Nemesis Arrow R, this adds ATS+9/ADF+6 and the ablity to cause Seal on enemies, if you’re still using Air Strike R, you can replace it with this. Note: Make sure to stick around and farm the Kumanba’s until you have acquired three Bee Larvaes for the Wild Recipe Side Quest.

Go back down to the main path and follow it down to the Titus Gate entrance to find a Chest on the right that is holding a Burn, this gives a 15% chance to burn enemies with attacks/crafts along with STR+10, be sure to equip it to Rean or Kurt. Finally, go back to the path you avoided earlier and you’ll view an event which is followed by a battle against Balancing Clown. 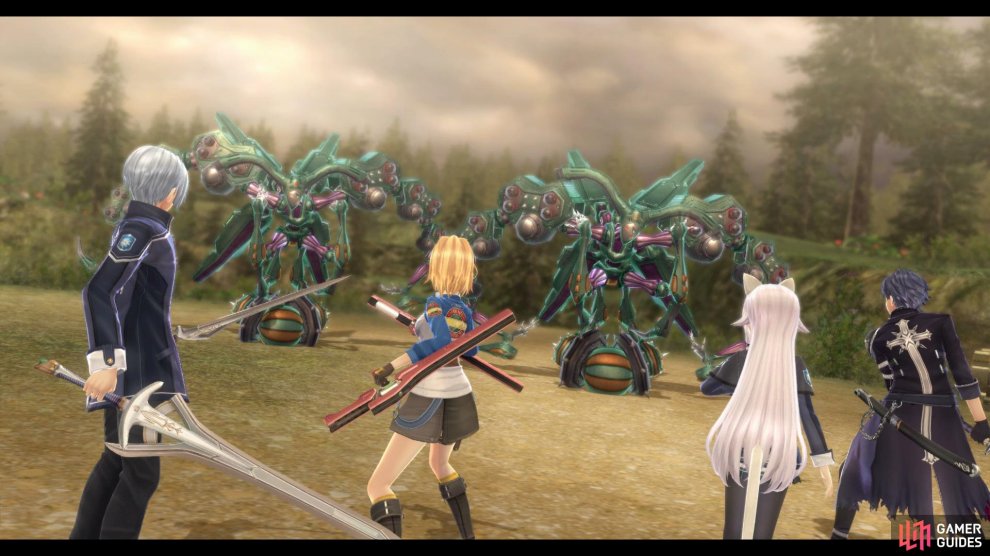 Scan them with a Battle Scope to add it to your Battle Book, and then you want to follow the same routine as you did with the Zephyranthes, keep Ebon Crest up at all times to reflect any incoming damage and work on getting them into the break status before using any available S-Crafts to quickly take them out. If you find that a member of your party has been poisoned you can use a Curia Balm to cure it.

After the enemies have been defeated you’ll view a scene and then you’ll find yourself back at Parm, now speak with Laura in the Vander Training Hall to get her Character Note and then talk to Sheila in the Private Home to get Radio Story #2, quickly send it over via the Arcus II and then go back to the Ex Camp.

Save the students! (Night) 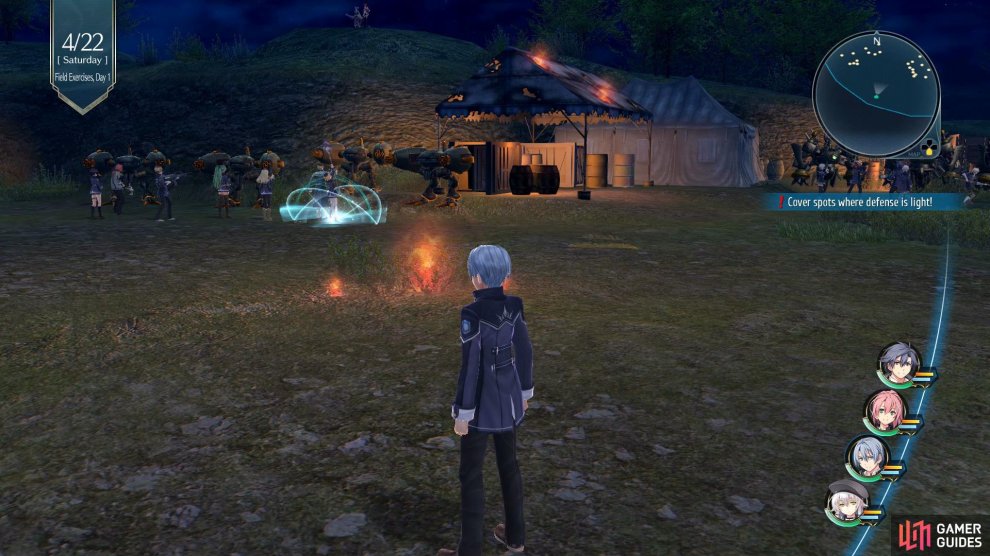 Warning: Make sure you scan all three bosses here as they count towards the South Sutherland Highway Battle Book.

Once you’ve made it back to camp and viewed the cutscene, you’ll need to help defend the camp. Firstly, make you way over to the South Sutherland Highway entrance and you’ll encounter your first battle, three Phalanx J9s. Keep Ebon Crest up at all times to deal with the incoming attacks and then use the techniques you used in the previous battle against them to take them out, now go over to the right wing and take on the three Zephyranthes.

Make use of Ebon Crest some more when you have the available BP and then get them into the break status before using a S-Craft if you have the CP. Finally, go over to the left wing and take out the Balancing Clowns. Like the previous two battles, use the same tactics as before and soon after their defeat more scenes will take place, advancing time to the next day. 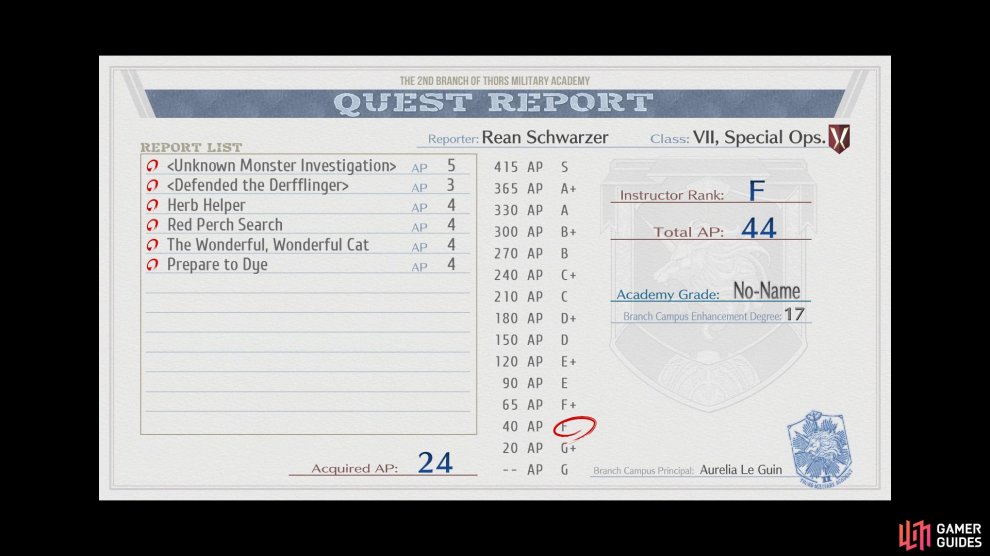