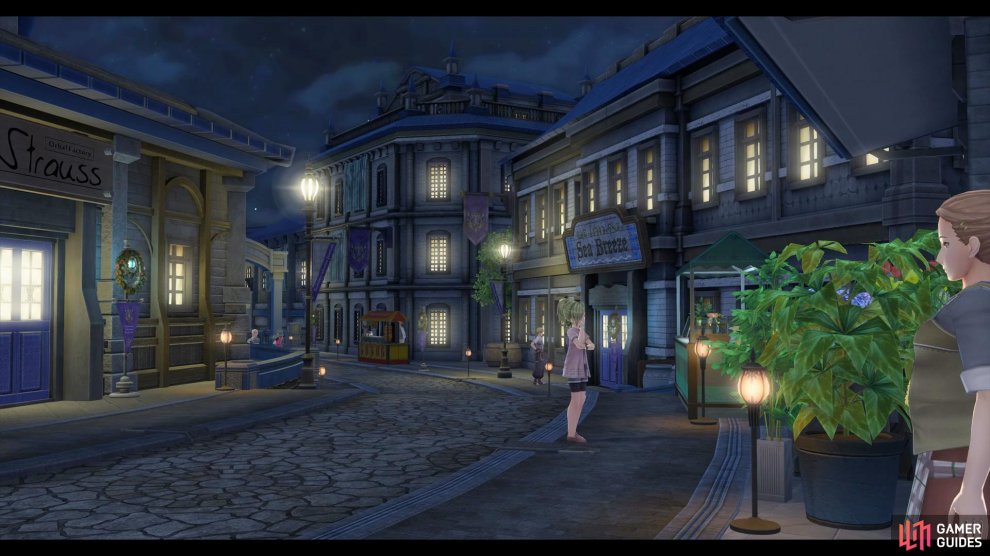 Once you’ve viewed the scenes and accepted the quests set out for today, head into Car 3 and speak with Leonora to accept the Branch Campus Quest, Pride of the Fleet. Make your way into the 2F of Liberty Heights in Raquel to view an event with Ash, then take the Northeast Exit into North Languedoc Canyon Road. 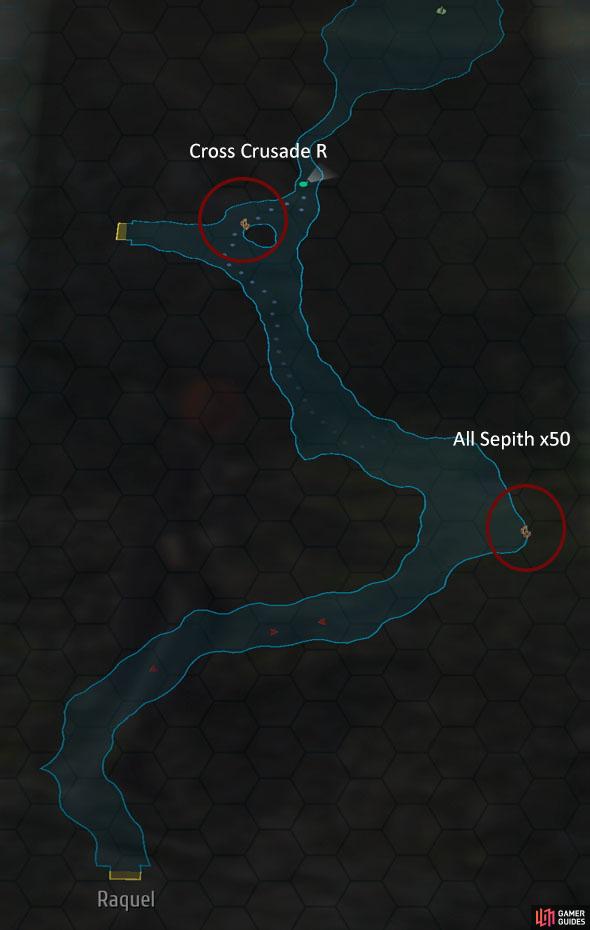 Follow the path along and you’ll stumble across a Chest on your right which contains All Sepith x50, then continue further up and you’ll find another Chest with Cross Crusade R inside, this gives HP+200/STR+6/ATS+6. Finally, proceed up into the open area ahead to tackle, Urkganon. 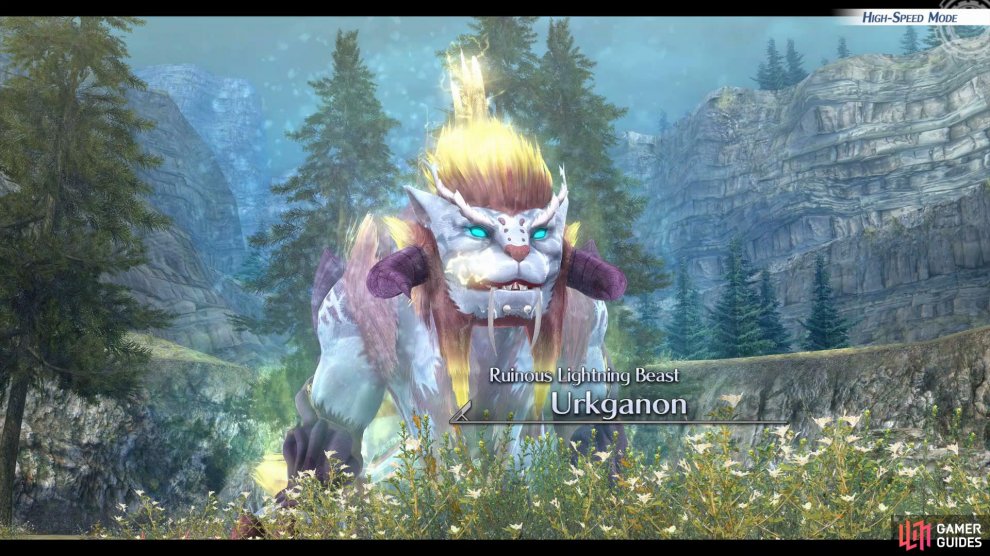 Begin this battle by activating Crazy Hunt to increase Critical Hit chance and then use one S-Craft and any Crafts with a high break rating to put him in the Break Status. Once you’ve achieved this you’ll want to use any remaining S-Crafts available to take off a large chunk of HP, then activate Spirit Unification and use the attacks with an S Rating to finish him off.

Following the cutscene, make your way over to West Lamare Highway and speak with the Provincial Army Soldier outside of Juno Naval Fortress to accept the Side Quest, Raising the Bardias.

Side Quest: Raising the Bardias 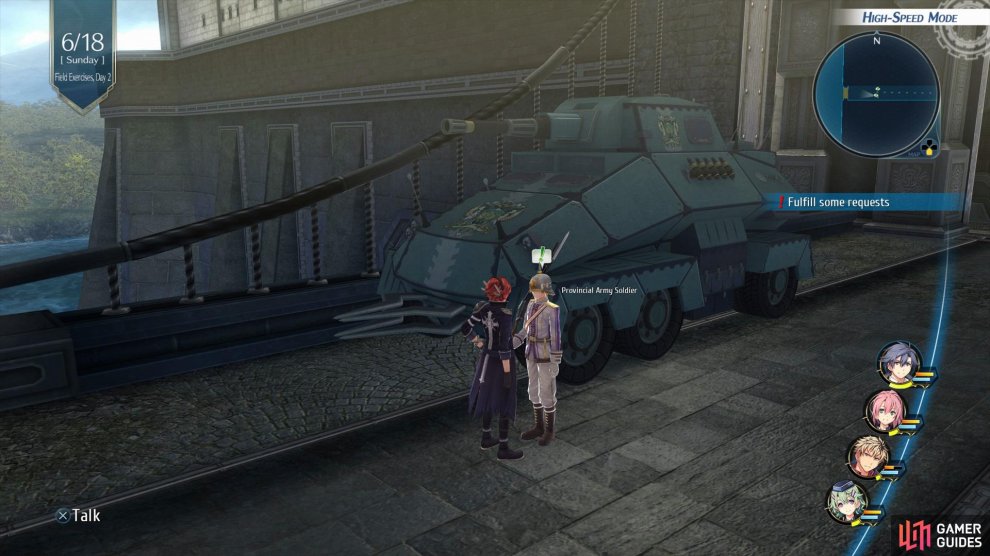 In order to complete this quest you’ll need to win a few battles, first of which is with the class only. Begin with a quick Battle Scope then use Sledgehammer along with any high break rating crafts on him to quickly put him into the break status. Once you’ve achieved this, activate Wind Blade and then continue using normal attacks to put a delay on his turn. Continue this cycle until Wallace reaches 10% HP. If he manages to charge up an attack you’ll want to use Ebon Crest to reflect all incoming attacks for four rounds.

Once you’ve beaten Wallace with the class, you’ll face him again in a duel with Rean. This time around you’ll need to get him down to 50% HP. Activate Spirit Unification along with Sledgehammer, then use Fatal Helix to put him into the Break Status. Switch your Brave Order over to Crazy Hunt and then continue using Fatal Crimson Slash until you’ve gotten him down to 50% HP. If you go below 50% HP, make sure to heal up as his attacks can easily two shot you.

After the cutscene has concluded, make your way into Riviera Court that’s located in the Ordis - Business District and speak with Ferris to accept the Side Quest, A Tale of Two Shops.

Side Quest: A Tale of Two Shops Speak with Ferris at the Riviera Court to begin this Quest.

Once you’ve finished speaking with Ferris you’ll enter a cutscene where you’ll be asked a series of questions that you’ll need to answer correctly in order to acquire the bonus AP.

After you’ve answered all the questions, another scene will playout and the quest will be completed. Return to the EX Camp and speak with Leonora to complete the Branch Campus Quest Pride of the Fleet. Make your way over to Auros Coastal Road and go down the secret path that is to the southwest of the beach to accept the Side Quest, Mystery of the Old Map from Aleister.

Side Quest: Mystery of the Old Map 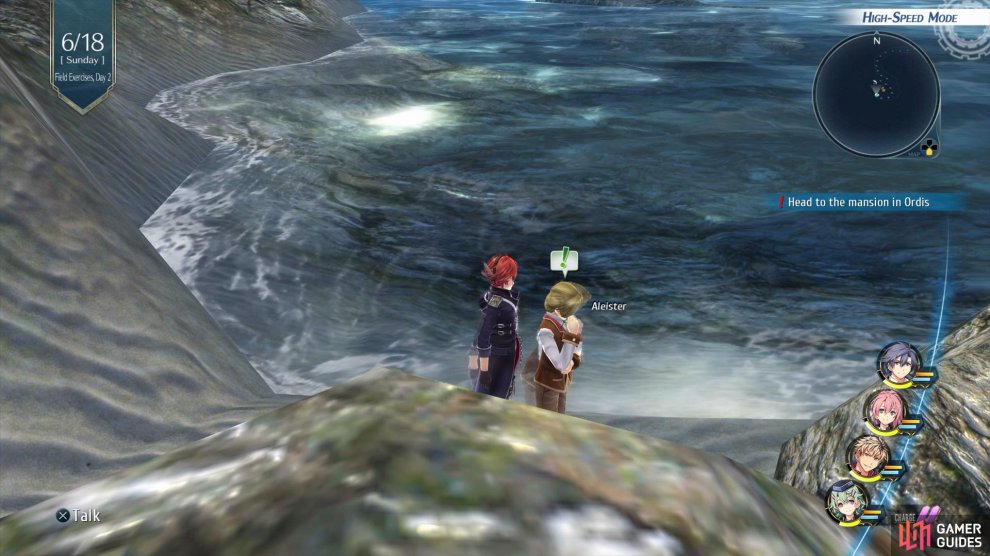 Make your way over to Juno Naval Fortress and head down the slope on the left to find a shiny spot, interact with it to find a Chest that contains the Old Map 3, then fast travel to the EX Camp and go over to the tree to find another shiny spot, open it to acquire an Old Travel Log and a Faded Crystal. Return to the Sea Breeze Tavern & Inn and give the items to Aleister to complete the quest.

Head to the mansion in Ordis / Gather sightings of Millium

Go to the Noble District and take the West Exit to view a cutscene. Once you regain control, head to the Business District to speak with Granny Jacqueline at the Stall, then go the the Sea Breeze Tavern & Inn to talk to Edmond. Finally, drop into Miranda’s Tavern that is located in the Harbor District. Pick the second choice, Ice Cream Shop > Inn > Sailors Tavern for the first question and then the third option, Millium was trying to go to the island for the second question. 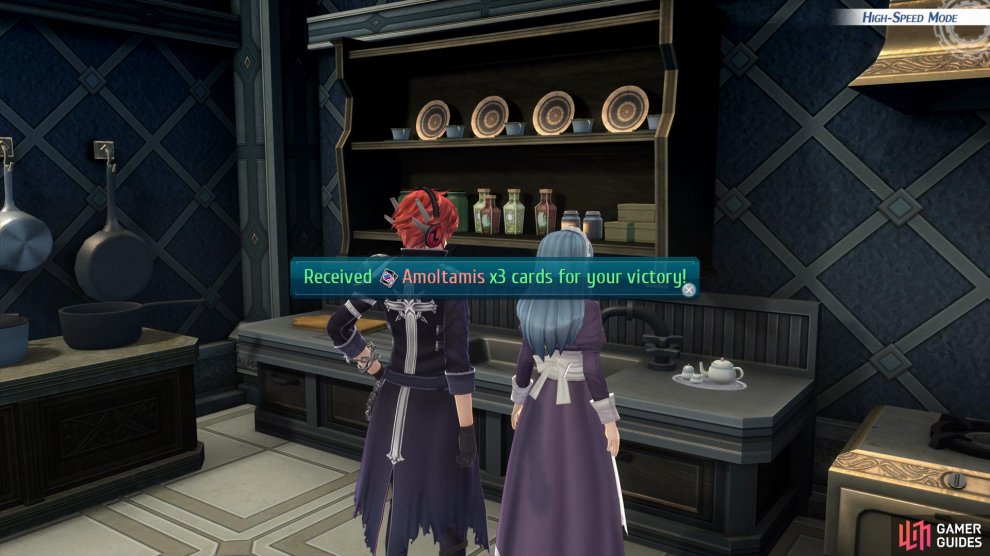 Challenge Setsuna to a game of Vantage Masters for the Amoltamis card.

Note Before leaving, head into Count Egret’s Residence and beat Setsuna at a game of Vantage Masters for the Amoltamis Card.

Exit the Tavern and follow the path along to the right and speak with Eston to get a boat to take you to Bryonia Island. Once you are done fishing, take the left path to find a Chest that contains Blue Hair - Ash and then investigate the ladder up ahead to open a shortcut, now go back and proceed onwards to reach the beach, here you can find a Fishing Spot where you can catch a Swordfish, a Landscape Photo and a Chest which contains Minotauros. Go through the cave to find an Emblem along the right path and a Chest that contains Black Records 5 along the left, now take a left out of the cave and you’ll come across a Chest with All Sepith x50.

Note: You’ll now need to return to the Emblems you’ve found around the Island and press [L2+Triangle] near them to activate them.

Continue following the path until you enter a cutscene, then climb up the ladder with Altina, before climbing up the 2nd ladder, open the Chest on the right for a Star Garment, press [L2+Triangle] near the Emblem at the top. Climb back down and head to the south section of the map and climb up another ladder to find the final Emblem, then proceed further south and interact with the Giant Boulder to open a shortcut. Finally, open the Red Chest in the open area for the Epoch Bell then return to the start and interact with the Altar.

Go into the Sol Shrine and follow it along until you enter a cutscene which will initiate a battle against Ennea the Sharp, Duvalie the Swift, and Ines the Stout.

Boss: Ennea the Sharp, Duvalie the Swift, and Ines the Stout 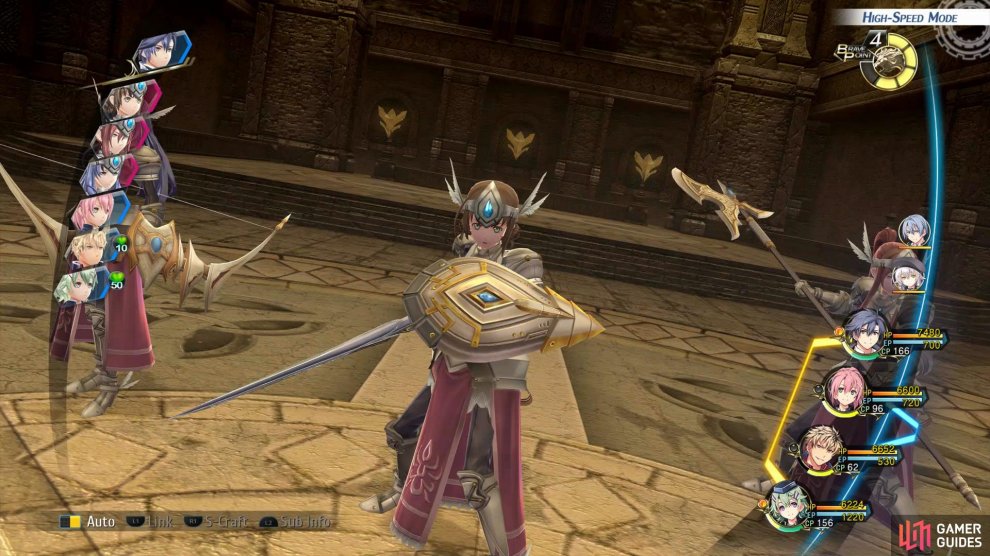 Begin the battle by scanning all three enemies, then activate Sledgehammer followed by Spirit Unification and then use any Crafts with an A/S Break Rating to put them into the Break Status. 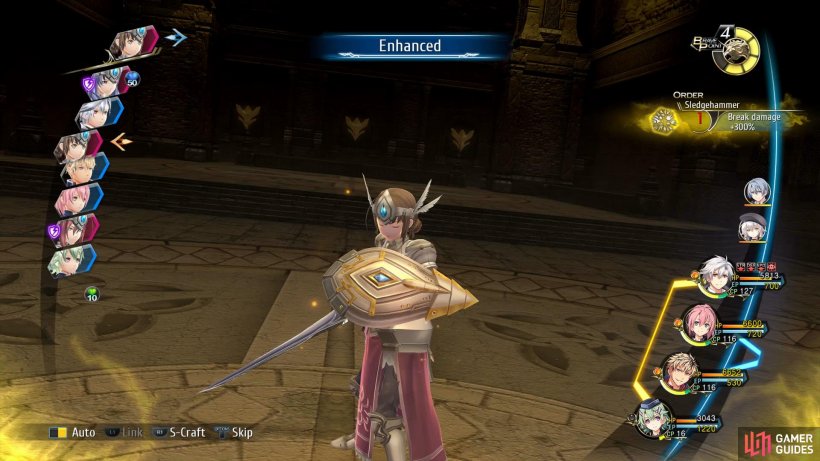 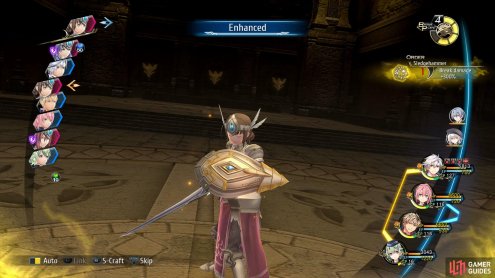 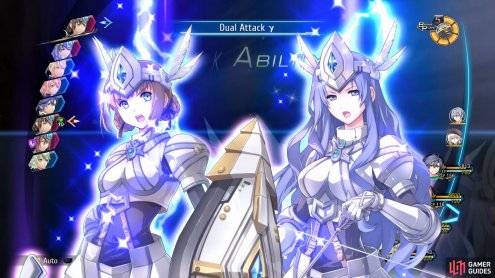 Be ready to heal up and use Ebon Crest (left), before they perform a Dual Attack. (right)

Once you’ve achieved this, activate Wind Blade and continue to hit them with normal attacks until they take another turn, then use S-Crafts to finish them off. Whilst you are chipping away at their health they’ll become Enhanced, make sure to fully heal up the team and use Ebon Crest to reflect the damage.

Once you’ve beaten Ennea the Sharp, Duvalie the Swift, and Ines the Stout you’ll face another opponent, Arianrhod the Steel Maiden. 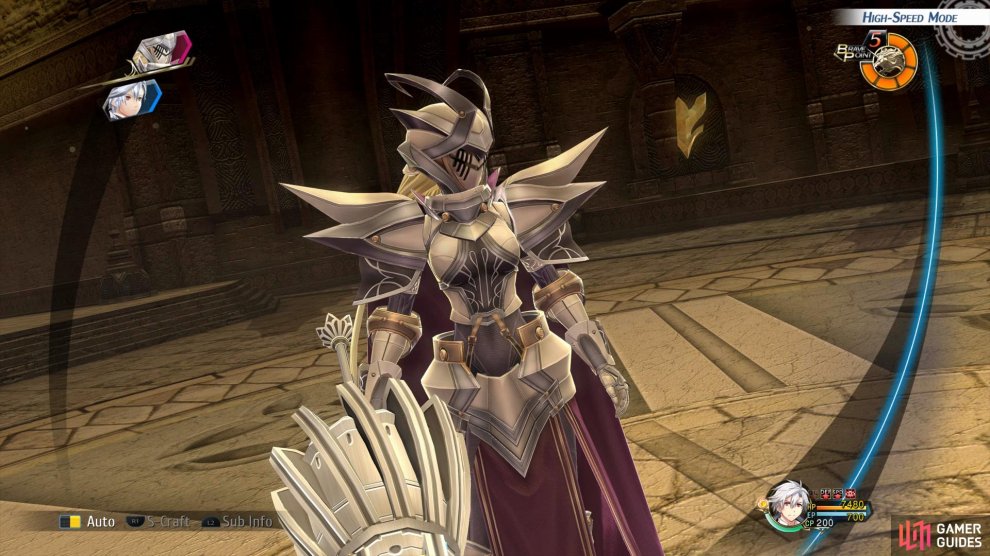 Begin the battle by scanning her, then use Sledgehammer followed by Fatal Helix to put her in the Break Status, now use Wind Blade along with normal attacks to delay her turn. Once she gets a turn you’ll want to quickly use an S-Craft to finish her off. If she manages to pull an attack make sure to quickly heal up.

Enjoy the festival, then return to camp

Once you’ve returned to town after the battles, head towards the east side of the Noble District to speak with Lady Ramona for the Radio Story #7, send this to Munk via the Arcus II, then make your way over to the Auros Coastal Road beach and speak to Annabelle to get the Heartless Edgar - Chapter 7 along with a Character Note, now go to Miranda’s Tavern and speak with her for Seafood Boil x3.

Go out and purchase a Steak Skewer from Darkins’ Skewer Stall, then speak with Count Egret outside his home for Assorted Grains, Healthy Liquor x5. Talk to Glycine in the North Street to get some Sunshine Punch, then drop into the Sea Breeze Tavern & Inn to chat to Edmond for a Passionate Hotpot, now speak to Luther in the Strauss Orbal Factory for a Coral Bracelet. Finally, speak with Granny Jacqueline in the Business District to purchase the Aquamarine Ice Cream Recipe, then accept the Side Quest A Keepsake Lost from Charlotte in the Harbor District.

Side Quest: A Keepsake Lost 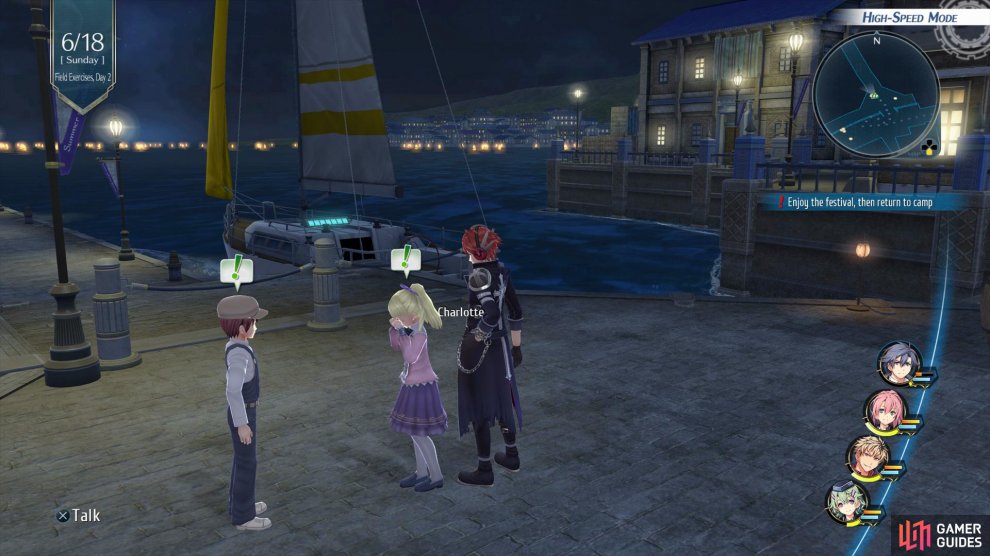 Once you’ve accepted the quest, go into the Business District and interact with the shiny spot near the statue in the middle, then return the item to Charlotte to complete this Quest.

Return to EX Camp via the Business District and you’ll enter a couple cutscenes. Once you regain control, head out of the Car 2 door to view another scene to wrap up today. 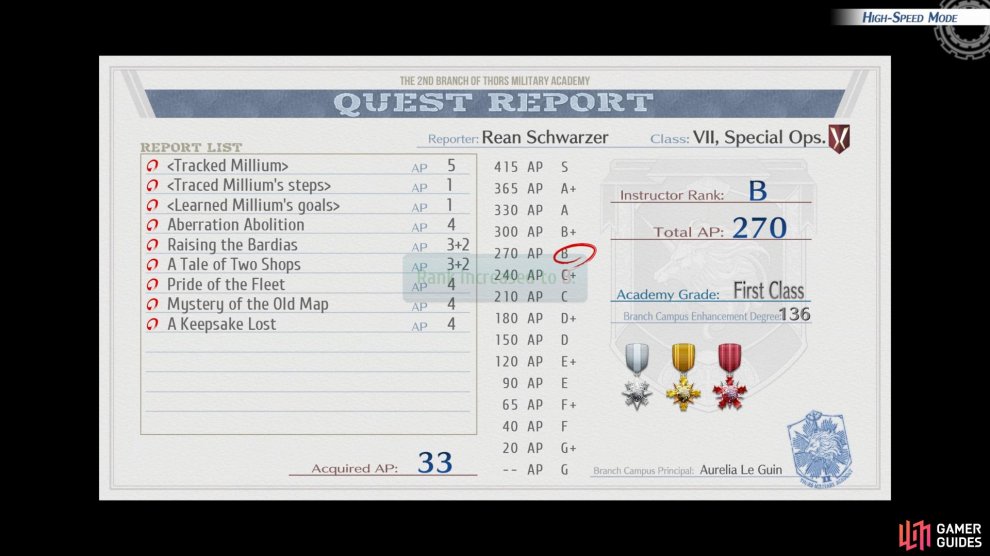