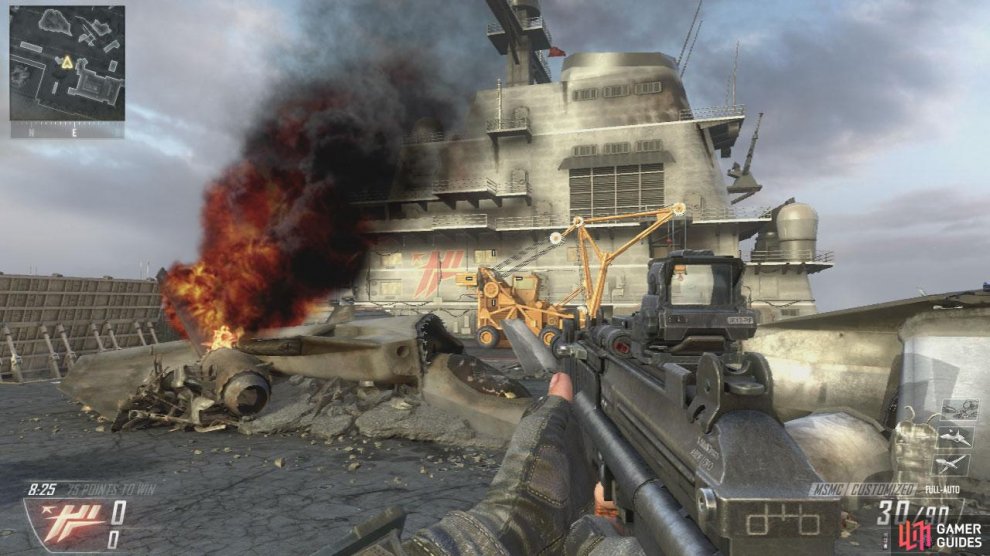 The Carrier map is based upon the burning remnants of an aircraft carrier. This is a small map with a mix of open and close quarters inducive environments. The two teams start in opposite corners with on in the North-East and the other in the South-west. On the south side of the area, to the west is an open missile storage bunker [Bunker], to the wast of this is a [Fire Truck] and further to the west a [Control Room]. You will also find a flight of stairs leading up to a pair of [VTOLS] here. Below the [VTOLS] is a lower deck - [South East Corner] which allows access to the large [Command Structure] that takes up most of the eastern side of the map. On the northern end of the map. You’ll find easy access to the large [Command Structure]. To the west of this is an intact [Helicopter] and several [Raised Ramps] with small, narrow passages into the central area present between them. In the centre of the area is an access point to the [Command Structure] to the East as well as a pair of [Wrecked Fighters], the southernmost of these has a tunnel running through it. On the west side of the area is access to the [Bunker]. Scattered across the rest of the deck are a number of missile pallets, vehicle debris and some other obstructions to provide cover.

Flag A - In the very north-east corner of the map.

Flag B - In the very south-west corner of the map.

Site A - On the main deck to the west of the [Wrecked Fighters] and north of the [Bunker] .

Site B - Next to the aircraft On the lower deck in the [South East Corner] .

Flag A - In the very south-west corner of the map.

Flag B - Between the two [Wrecked Fighters] on the main deck.

Flag C - In the very north-east corner of the map.

Site 1 - Between the two [Wrecked Fighters] on the main deck.

Site 3 - In the very north-east corner of the map.

Site 4 - Inside the [Bunker] in the south-west corner of the deck.

Site 1 - In the centre of the map, just to the east of the [Wrecked Fighters] .

Site 2 - Inside the [Bunker] in the South-west corner of the deck.

Site 3 - Inside and at the southern end of the [Command Structure] .

Site 4 - Next to the [Helicopter] and [Raised Ramps] on the north end of the map.

Site 5 - In the centre of the map, west of the southern most of the two [Wrecked Fighters] .

Site A - On the main deck to the west of the [Wrecked Fighters] and north of the [Bunker] .

Site B - Next to the aircraft On the lower deck in the [South East Corner] . 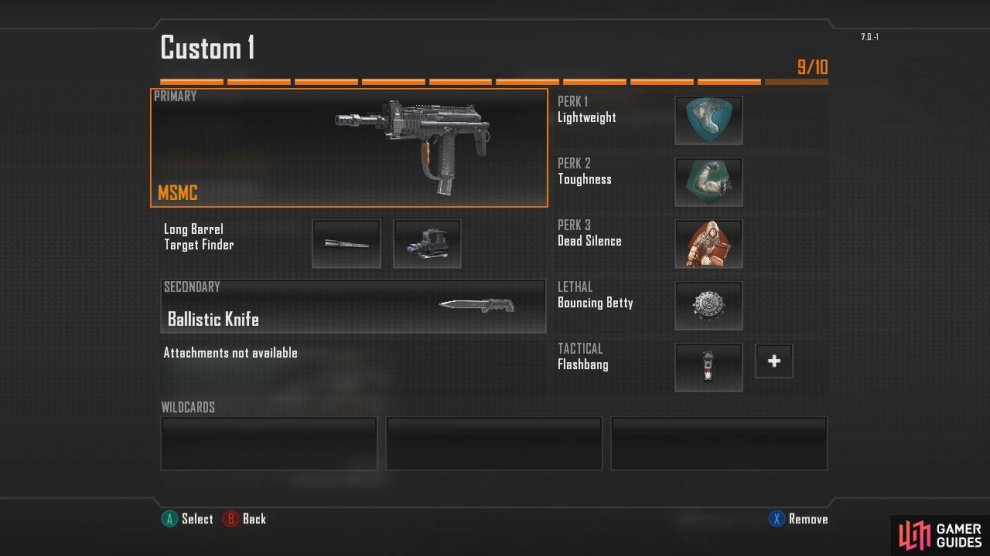 The main hot spot on the map is on the major part of the deck of the carrier in the centre and southern part of the map. There is a lot of debris here with [Wrecked Fighters] , a [Bunker] and lots of crates strewn across the place.

The level is much more open than any of the previous levels, so for this one an assault rifle with a scope is going to be your best friend.

[Raised Ramps] on the north side of the map: The top of these ramps may very well be the best vantage point in the map, allowing you to see just about everywhere. The only problem is that you will be exposed whilst standing there.

In the small control room to the south of the [VTOLS] : from here you can see the lower deck in the south-east corner of the map as well as a pretty good line of sight into the southern part of the main hot spot area.