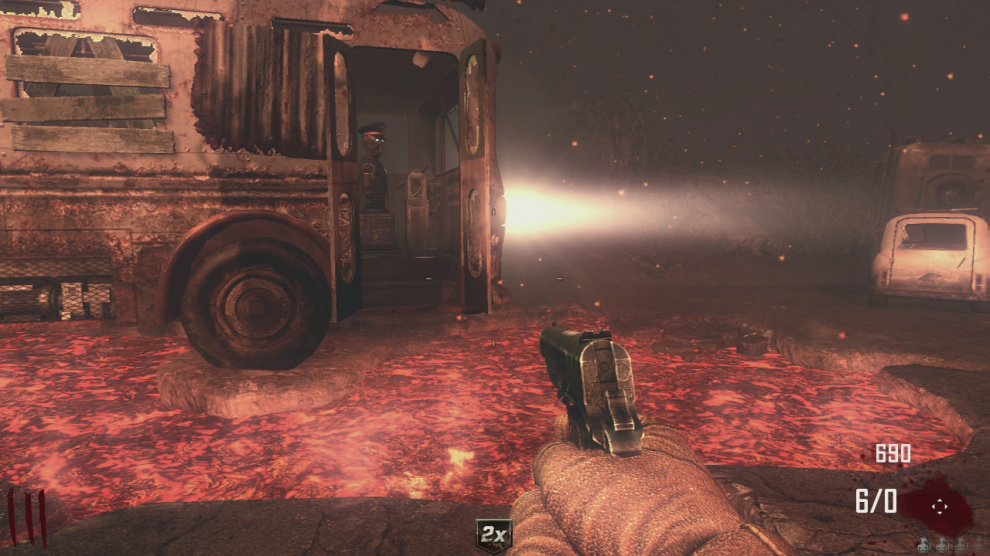 You will always spawn in the Bus Depot when you start the TranZit mode. As you begin, you will note that none of the zombies are wandering about. Run up and melee the guys in the room for a quick points boost to start you off. Once they are all dead, the rest of the zombies will show up.

In this first room, there is a door that can be opened for 750 points. However there is a second door that flashes up the message 'You'll need a source of power!' when you get close to it. Thankfully we can make a turbine from a number of items in this first room to open the door. To do this we need to bring three items to the crafting table in the corner near the door that wants a power source. The items we need are:

Mannequin - Inside the bus depot. In front of the map in the centre of the room.

Fan - Inside the bus depot. On a chair near the crafting table.

Tailfin - Inside the bus depot. Below the payphones on the far side of the room from the crafting table. Once you have combined all three, you will be able to pick up the turbine. You can deploy this near doors that ask for a power source to open them. Before you do so, you can eplore the rest of the room and you will find a Perk-a-Cola machine for Quick Revive (500 Points in single player/1500 multiplayer) and a pair of purchasable weapons: M14 (500 Points) and Olympia (500 Points).

Open the door with the turbine and search the room for a bus part (there are four places the three bus upgrades can spawn and this is one of them). If its there, grab it and use the turbine on the next door to exit the depot and attach it to the bus before hopping on. If not, just jump on the bus to travel to the next area. 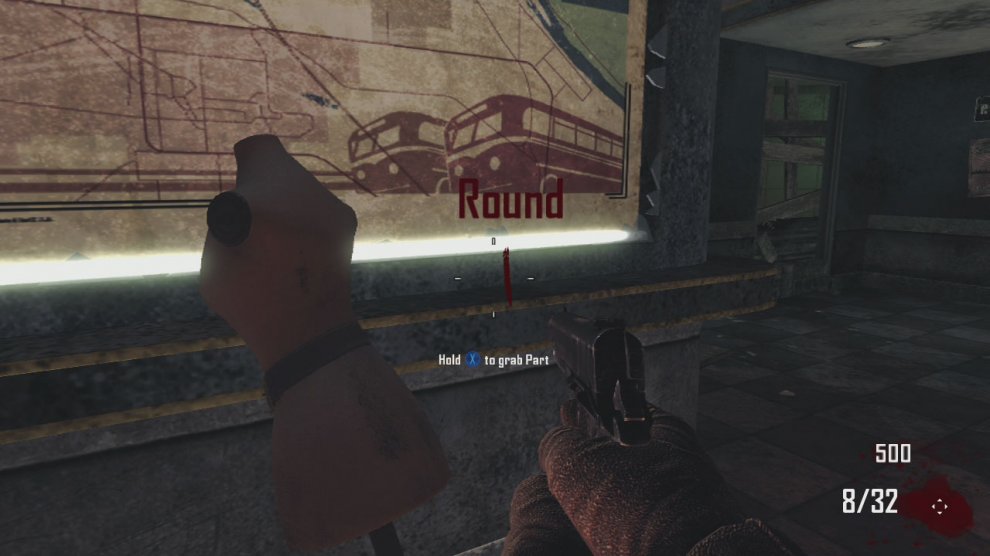 There are three areas to explore when we reach this stop. Hop out, being sure to jump over the lava pit at the exit to avoid unneccessary damage. Just next to the bus is the diner. we can open the door here for 750 points. Inside you will find another Perk-a-Cola machine for Speed Cola, next to this is a weapon - MP5 (1000 Points). We can also find a trolly in here (can be behind the counter or on the far side of the room next to the broken table. 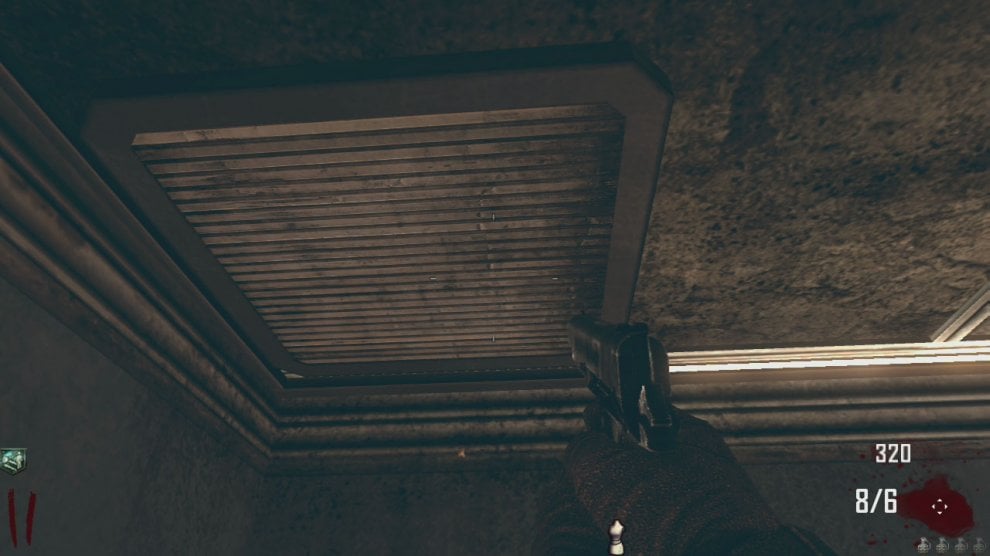 To the left of the diner is a car garage. The door here can likewise be opened for 750 points. Inside you will find a crafting table in the back corner. Here we can construct our next item - the zombie shield. For this we will need two items. We'll require:

Trolly - You will find this somewhere inside the diner it appeared for me both behind the counter and next to the broken table at the far end of the room from the perk-a-cola machine.

Car door - this is in the car garage attached to a raised car in the room to the left of the crafting table. Also in this room is a mystery box, so feel free to open it if you feel like it for 950 points. Exit the garage and continue along the road to the left until we reach another building with a locked door. This time we can pull out the turbine to open it.

This is the second of the four areas where one of the bus upgrades can spawn. So grab the bus piece if it is present, return to the bus and install it. If not, hop on the bus and continue to the next area.

When you get off the bus, head over to the wooden gate and open it for 750 Points. Once inside you willnote a barn to the left, a homestead to the right and a locked shed directly in front of you.

We can explore the open barn to the left to find a Perk-a-Cola machine for Double Tap Root Beer on the top floor. On the back of one of the crates on the ground floor you will also find the weapon Remington 870 MCS (1500 Points).

The Farmhouse can be opened for 750 points. Inside you will find a fridge which allows you to store weapons. Also on the ground floor we'll find a crafting table we can use to create a turret. We're going to need three items to make this beast. Here they are:

Machine gun - Can be found in the barn or on the upstairs balcony of the house.

Ammo Pouch - Can be found inside the house, usually on the bookcase in the room upstairs but also at times in the kitchen.

Lawn Mower - From the shed at the back of the area, continue along to the left of the farm house. You will find it in a corner next to the wooden fence and opposite the back door to the house. The shed between the two main buildings can be opened with the turbine. Inside you may find another bus upgrade (this is the third of four possible bus upgrade spawn points). On the back wall of this room you will also find a chalk outline enabling you to purchase claymore mines (1000 Points). When you are ready, return to the bus, upgrade it if you can and then hop on to ride to the next area.

When we get off the bus, there is nowhere for us really to go except to check out the nearby shed. On the back of this is a weapon AK74u (1200 Points). Open the shed for 750 points and head inside. Drop down into a power station area.

Note: If you turn around when you land, you'll see a lightning symbol on the wall. The Pack-a-Punch machine is located in a hidden spot in the next area, but this power switch is necessary to access it. Note that you will need at least two people to open it up.

Continue into the circular room and follow the set path until you reach a room on the far side of the area. In here you'll find another crafting table. This one will allow us to craft the power switch. we'll need three items for this and they are all located either in the room with the crafting table or on the floor in the circular room we just came from. They are:

Severed Hand: Can be in the room with the crafting table or on the floor somewhere in the circular room we came from.

Switch: Can be in the room with the crafting table or on the floor somewhere in the circular room we came from.

Power Board: Usually in the same room as the crafting table. Combine these items on the crafting table and they will appear as a lever on the wall to the right. Pull this to turn the power on. If you look into the circular room you will see the electric boss zombie Avogadro in the glass tube in the centre.

If you leave the power on, you will not be able to re-enter the preivious room without being electrocuted. instead, hang out for a few moments and a door will open to the left of the crafting table. Climb this into a new area.

At the top of the stairs, you'll find another crafting table. This one will allow us to create an electric trap. We'll need three items for this one. They are:

Jack: as with the battery you will find this either on the platform with the crafting table, on the catwalk above or on the paltform at the far end of the catwalk.

The Town is the last major area and the largest of the maps in Green Run. There are a pair of Perk-a-Cola machines and weapons here. When you get off the bus, you will be facing the bank. Run over and spend 1000 Points to open it up. Inside you will find a vault door. Hit this with a grenade to blow it open. Inside you will find a deposit box that will allow you to store money (for a fee).

Note: In the vault you will find a second lightning bolt symbol on the wall. This is the same as the one we saw previously in the power station. If two people are playing, one can stay at the power station and the other enters the vault. If both players use their turbines simultaneously at the lightning bolt a secret passage will open leading to a crafting table and the three items required to create the Pack-a-Punch machine.

Across the street from the bank is a bar, you can open the door here for 750 Points. Inside the bar, you will find a Perk-a-Cola machine for a Stamin-up (2000 Points).

The final point-unlockable building in the area is the one that is on fire. Climbing up to the second level allows you to open a door here for 750 points. Inside you will find the perk-a-cola machine for Jugger-nog (2500 Points).

There is also a final area that can be opened by the turbine. Inside you will find a chalk outline that will enable you to buy Semtex (2500 Points). Well that does it for the main areas! Thankfully there are a few more secretive locations included in Green Run with additional sexy weapons and other constructible items to benefit players in some way. 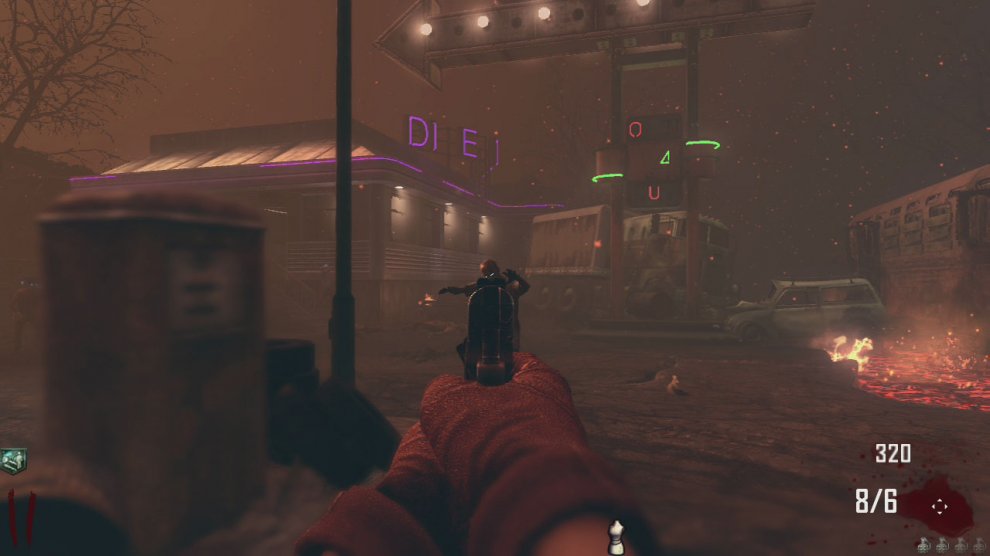 The Tower of Babble

The Tower of Babble is a multi-stage Easter Egg taking part over multiple maps of Green Run in TRanZit mode. Note that you will need four players to complete the egg. Heres a brief step-by-step.

Make a turbine, have all players pick it up.

Go to the Power Station, turn on the power; this will release the electric boss zombie Avogadro.

Get an EMP from a mystery Box or Galvaknuckles from the Diner.

Hop off the bus between the Farm and the Power Station and look for the radio tower in the corn field. Make your way over to this, killing all the denezins that will undoubtedly attack you.

Place your turbines at the base of the tower to power it.

Defend yourself at the tower until Avagadro shows up. Kill him with the EMP grenades/galvaknuckles whilst the turbines are powering the tower. 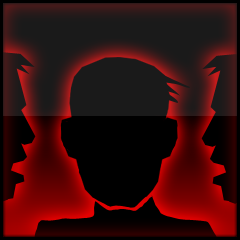 In TranZit, obey the voices.

Shoot your way to victory in our massive and in-depth strategy guide to Call of Duty Black Ops 2. Inside we'll show you: