You’ll step off the train as Markus, newly re-formed after his junkyard escape. He’s on the path to Jericho, but first he must follow the clues to track down the mysterious group’s location. The chapter is linear, so just follow the steps to reach the end. 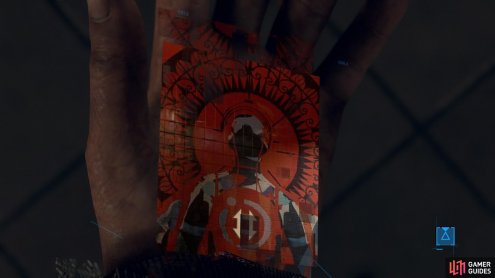 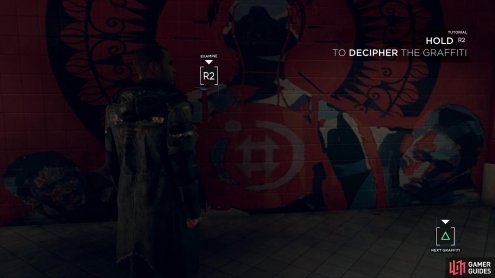 Flashback of Deviant: Unmissable – Markus will automatically remember what the android in the junkyard told him about finding Jericho at the start of the chapter.

Analyse Station Graffiti: Once you have control, go left to look at the graffiti on the wall. Scan the wall to find the symbol. 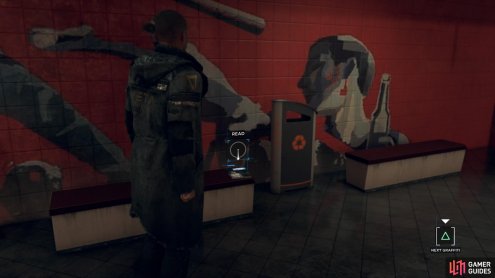 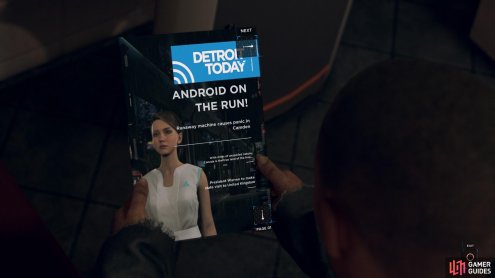 Magazine: Find it on the bench in the station. This magazine is dependent on choices made in previous chapters. ‘Android Astronauts’ will always be one of the articles you can read here, but the second article will change based on how Kara’s story has played out so far.

– ‘On the Run’: Kara must have escaped from Todd’s house with Alice, and be seen by the police and ran across the highway successfully.

– ‘Fortune Teller’: Kara must have spent the night in the abandoned car and evaded the police without being seen or chased to the highway. 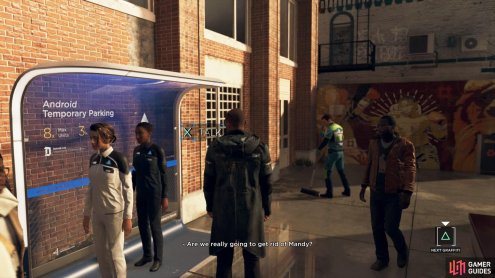 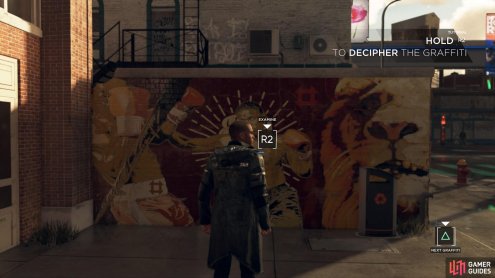 Exit the Station: Go down the escalator at the right end of the station, and use the human exit to blend in.

Ask Android: At the bottom of the escalator, speak to the android waiting at the bus stop about Jericho’s location.

Follow the Signs: From here, continue to follow the clues in the graffiti located around the area. When you step off the escalator, head for the wall straight ahead of you to scan for another symbol.

Sticking to the left sidewalk, walk down the street until you reach the end of the area. You can scan for two more symbols behind a fence. 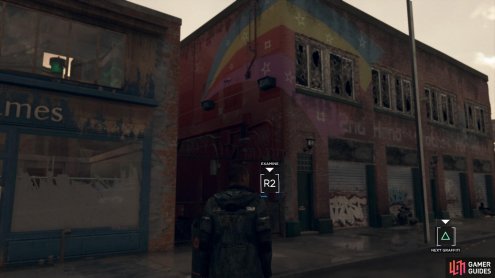 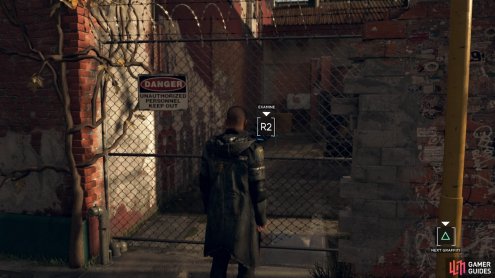 Leave the Street: Now go under the fence to remove a wooden plank away from the wall to find another symbol.

See Android Body: Missable, but once you come to a small junkyard you can find the body in front of a white car. 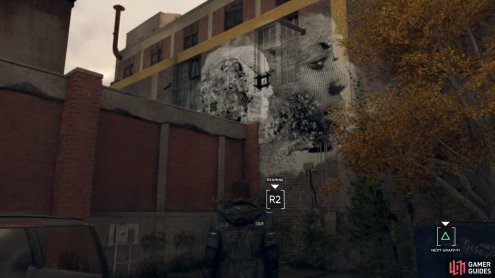 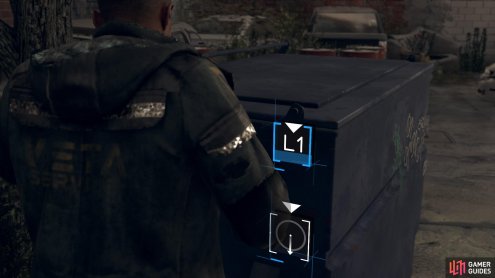 Continue to Jericho: Continue to follow the clues in the graffiti and use a dumpster to climb up on to the roof. You can scan two of the symbols before climbing up, but then you need to get to the roof to find the last one.

Once you’re on the roof, scan for the third clue only visible from here. When you’ve found them all, jump over the gap by using R2 to preconstruct a path, and then perform a wall jump to reach the other side. 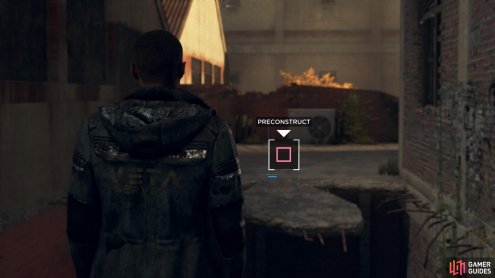 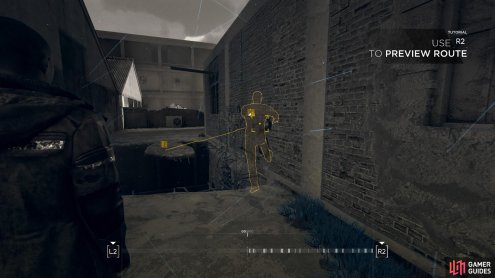 See Android Body: Drop down into the next yard to find another android body lying to the left of the container ahead of you.

Reach Door: Here, you can preconstruct another path using R2 to find a way into the building. Choose to go up via the left wall and use the ladder to hoist yourself up. 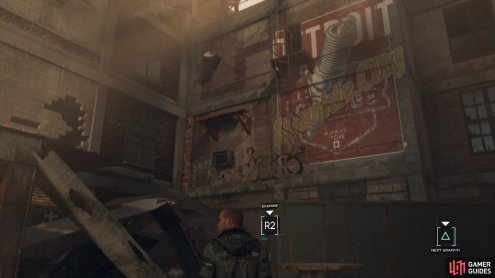 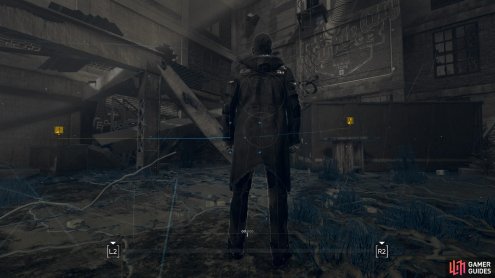 Explore Office: This is unmissable and will unlock once you’ve gained access into the building.

See Android Body: In the office, you can find another android behind a pillar straight ahead of you.

Find the Exit: To find the next symbol, you need to line up a pillar with part of the wall from the correct angle. When you’ve found it, head right of the symbol to go through a hole in the wall and push past the rubble. 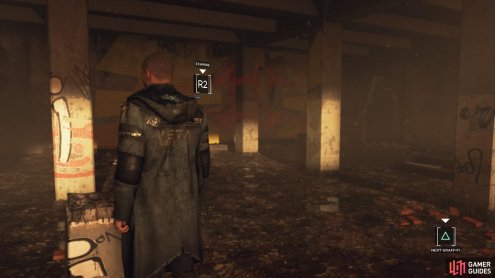 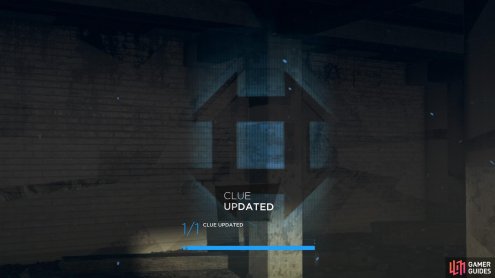 You’ll be met by a brief cutscene once outside, and then you’ll have to walk the bridge – but the bridge collapses, forcing you to find another way across. Simply backtrack and find the crane by climbing up a railing on the left and heading upward to ascend the ladder. Once you’re at the top, walk to the edge of the crane and fall forward.

You’ll end up inside the ship. 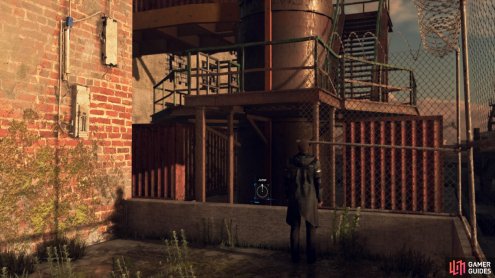 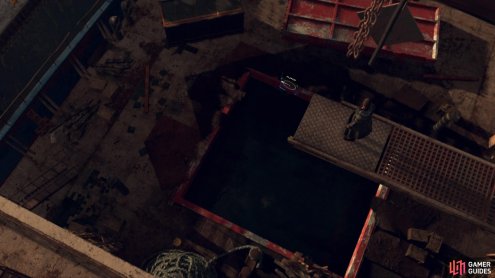 Find a Flashlight: You’ll have landed safely, so pull yourself out of the water and open the door in front of you. Once you’re through the door, pick up the flashlight from a case on the wall.

Enter Machine Room: Follow the linear path through the ship by heading down the corridor. There’s a lot of closed rooms along the way that require turning the hatches, but most of them are either locked or empty. Head straight to the end of the corridor for the only door that matters by passing under some debris – the door is on the left. 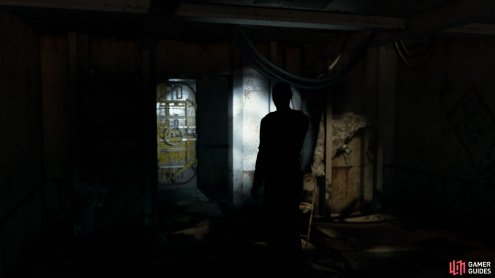 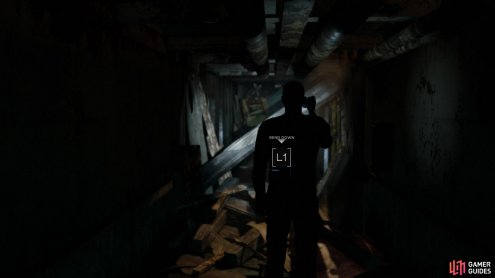 Fall off Catwalk: Continue down the stairs and across the catwalk as it collapses, sending Markus downward.

This leads to the end of the chapter as Markus finally stumbles upon the androids of Jericho.