This chapter isn’t necessarily long, but there are a lot of objectives to accomplish and some very important decisions to be made. Here we’ll give you the breakdown of everything you can do at The Eden Club with Connor and Hank. 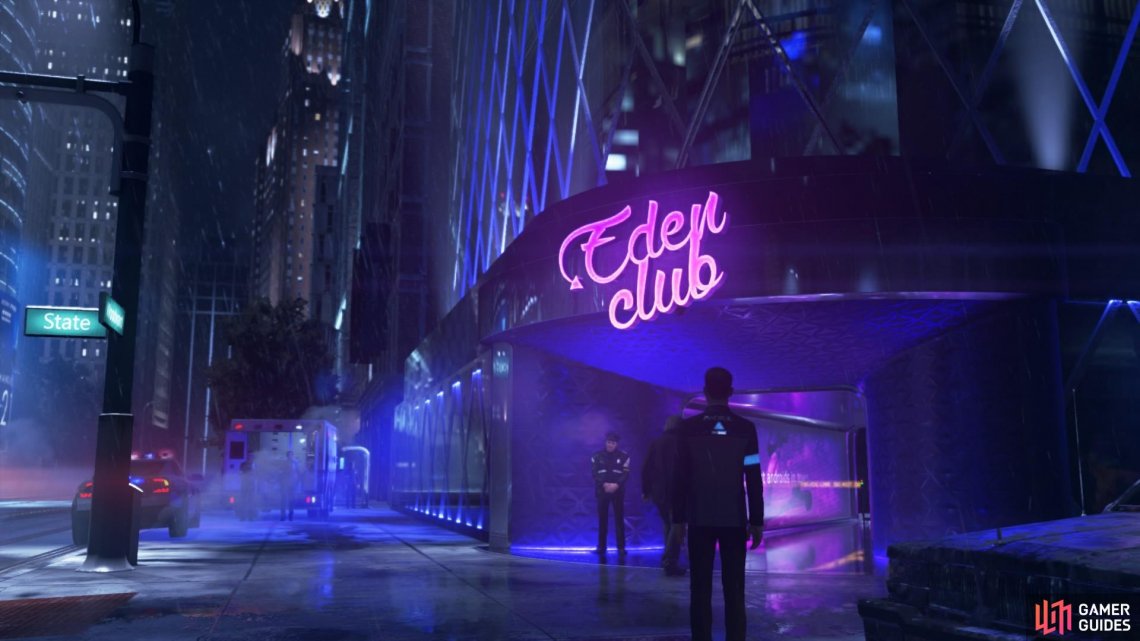 The start of the chapter is linear, so everything is unmissable. All you have to do is follow Hank to complete the objectives successfully.

Talk to Android: When talking to the android, choose Aggressive Approach (DIRECT) or Calm Approach (SOOTHE), and continue to talk to her until she shuts down again. 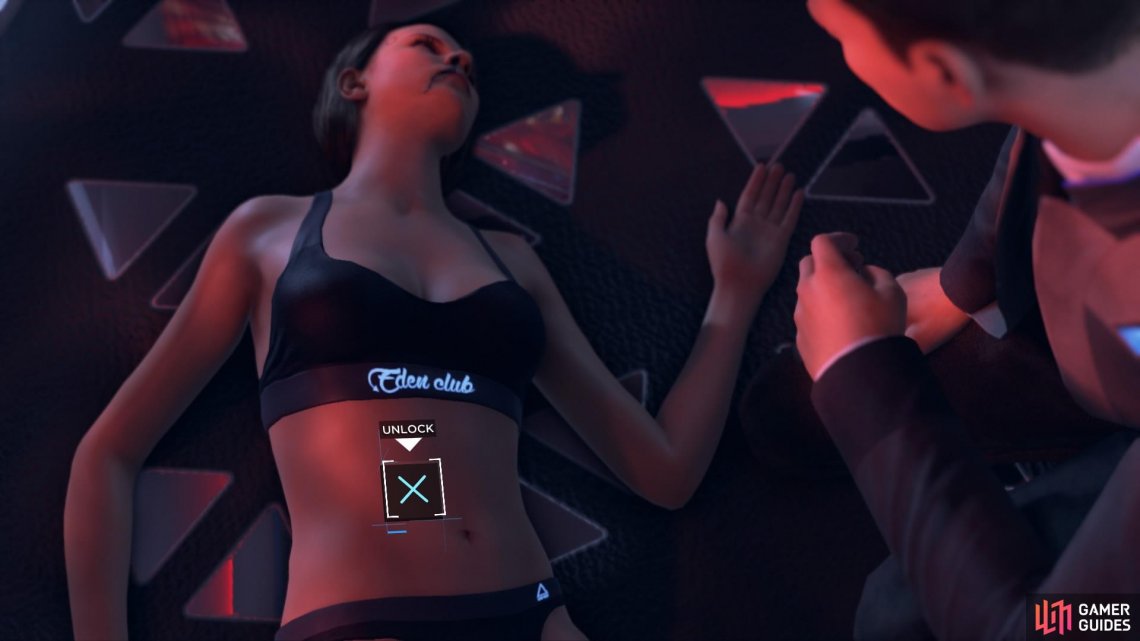 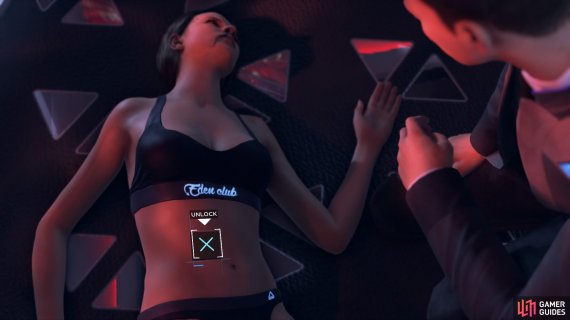 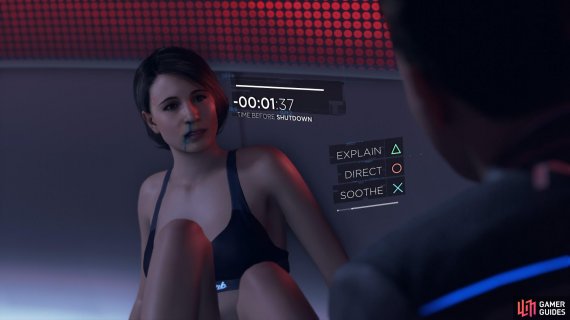 Reboot the Traci android (left), Talk to her until the timer runs down (right)

Give Up: You can just give up the mission by standing around for three minutes doing nothing. The mission will automatically fail leading to Mission Failed (Ending).

Find an Android Eyewitness: On the opposite side of the crime scene is an android in a glass case. Interact with it to see that you need a human handprint. 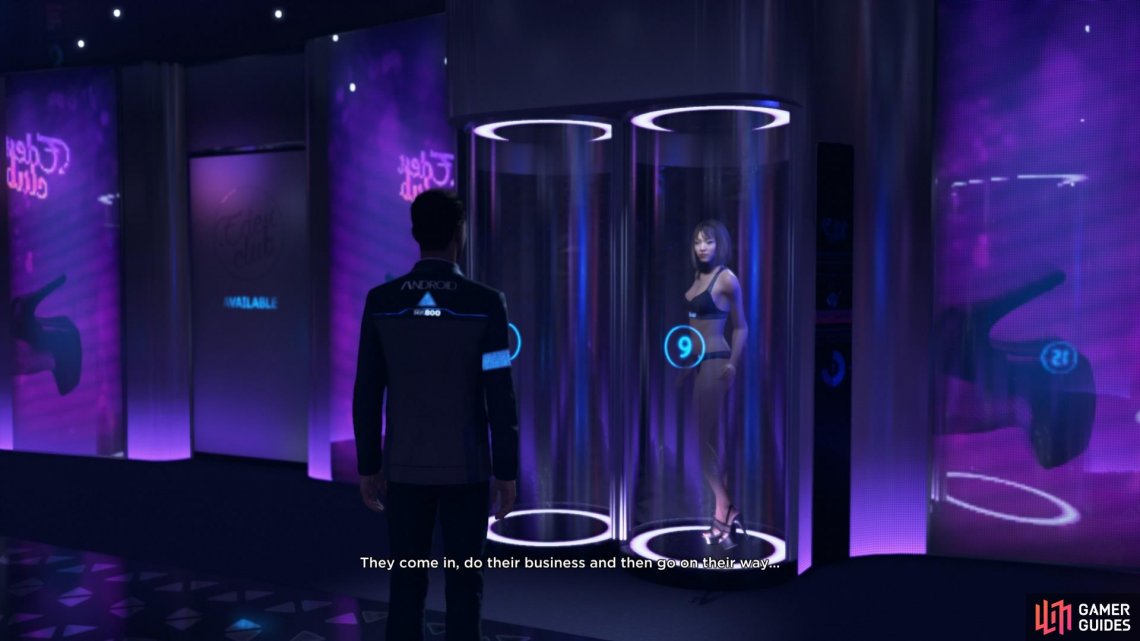 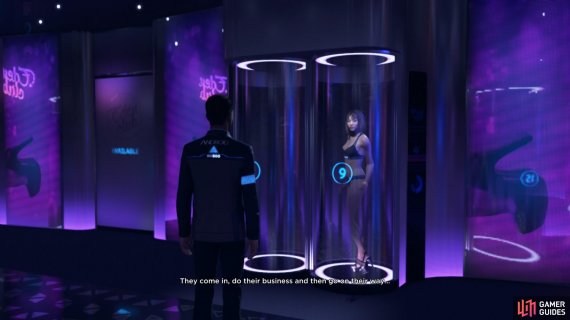 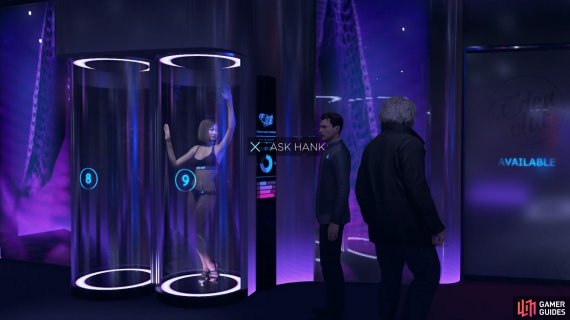 Find the android directly opposite as you come out of the room (left), Ask Hank to help (right)

Ask Hank to Help: You need the human handprint to pay for the android and gather some clues. Ask Hank to help you – he’ll find it absurd, but he’ll do it anyway. 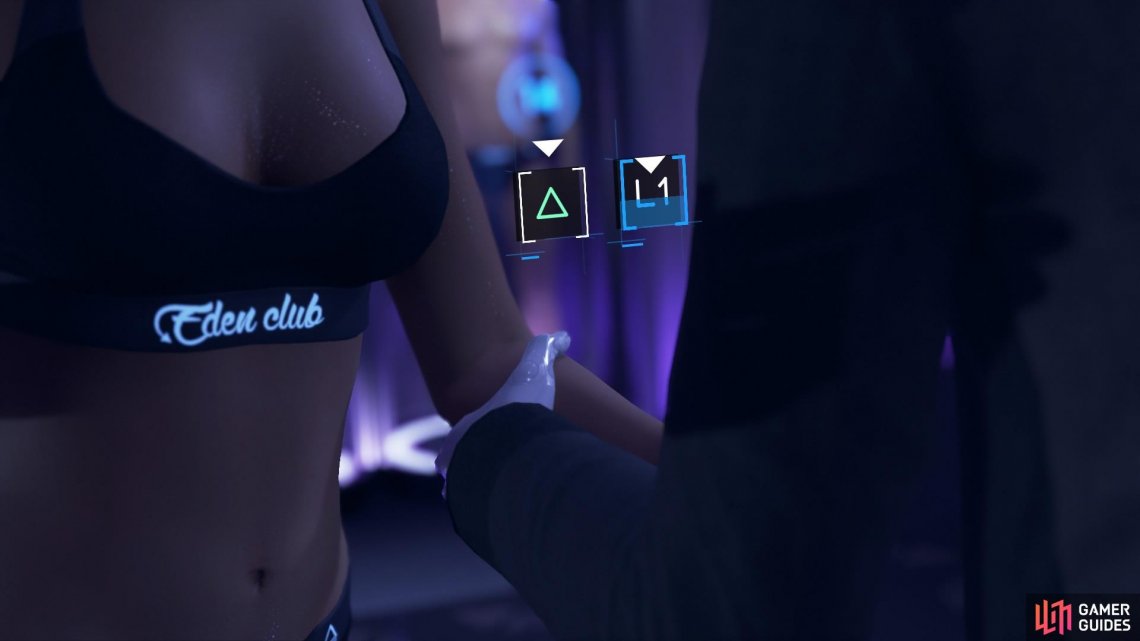 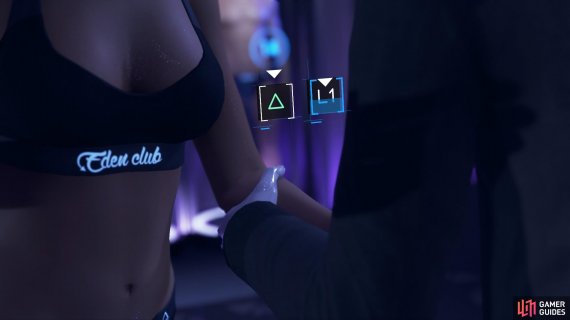 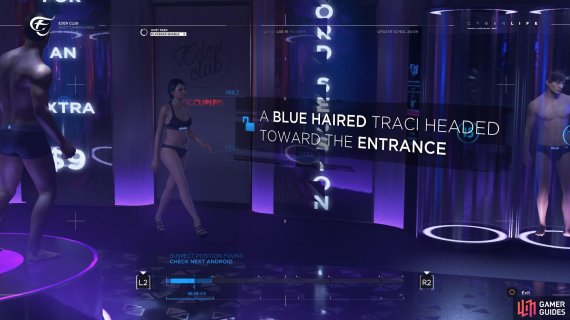 Pursue Deviant: Now you have to follow the clues to find the android culprit. Continue to move around the club and interact with the androids to probe their memories. By doing this, you can follow where the deviant went from one room to the next. The final clue lies with the android cleaning the floors – it’ll lead you to a ‘Staff Only’ door that heads into the warehouse.

Androids’ Memories are Reset: The alternative outcome, once again, is to fail the mission by standing around until Hank says he wants to leave. Agree to give up and get the Mission Failed (Ending).

Search for the Blue Haired Deviant: You’ll have noticed while searching the club that you’re trying to track down a blue haired Traci android. These are all the things you can do along the way. 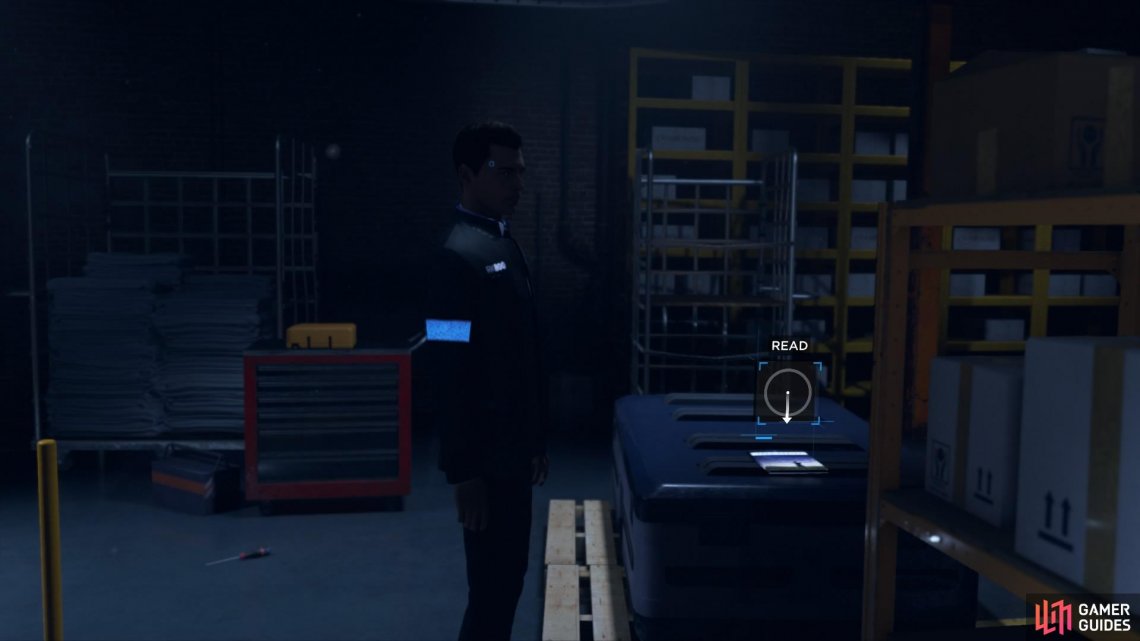 – Magazine: When you reach the warehouse, you can find the magazine sitting on a box at the back. Pick this up first before apprehending the deviant, otherwise you’ll miss it.

– Analyse Blue Blood: On the right side of the warehouse is some blue blood on the floor. Connor will take a taste test, and it leads to the group of Traci androids in the back corner of the room. Don’t interact with them yet – it’ll cause a skip to the next section, so leave this clue til last.

– Investigate Android Stock: When you enter the warehouse at the bottom of the stairs, you can find some deactivated androids standing around. Use L1 to investigate them.

– Find rA9 Symbol: Near the collectible magazine you’ll find the red rA9 graffiti on the wall. 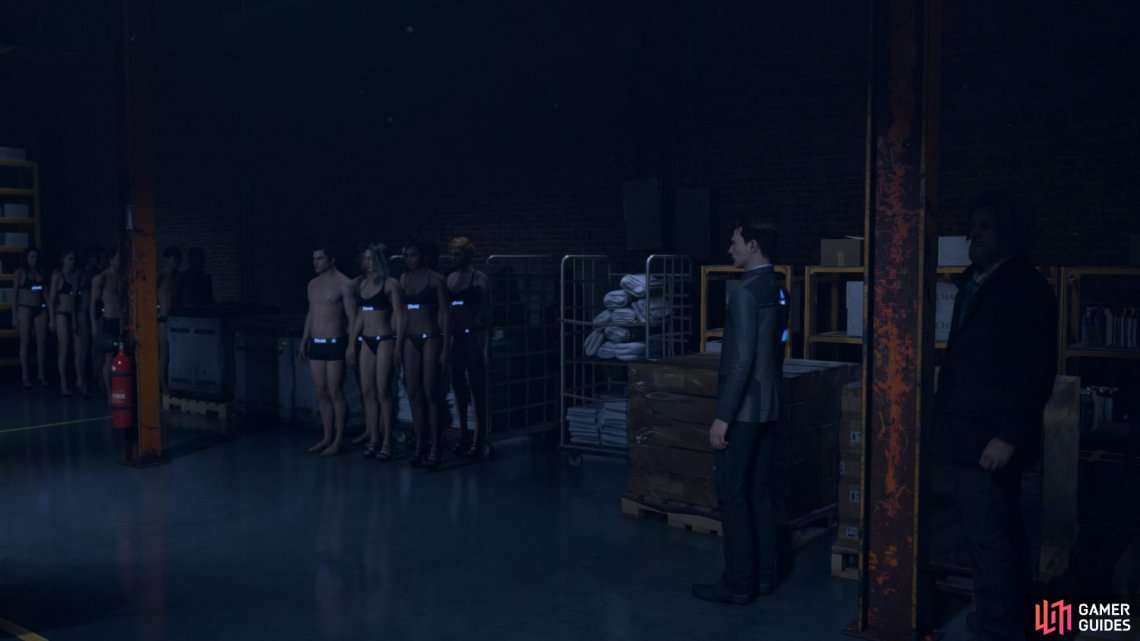 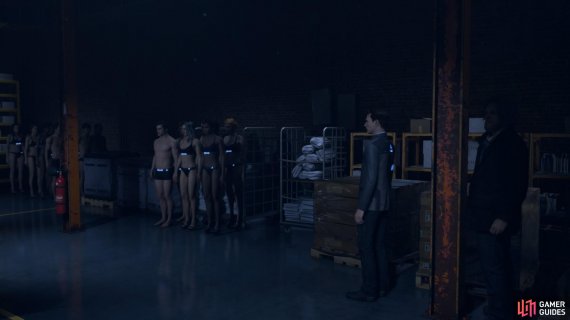 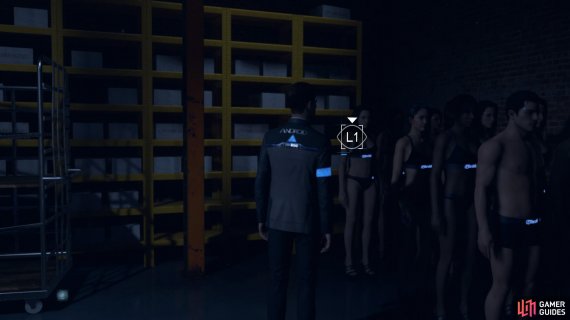 Find the blue blood trail here (left), Use R2 to follow it to the back corner (right)

– Investigate Blue Haired Deviant: Analyse the blue blood first, then follow it to the droplets that lead to the androids in the corner of the room. Look at them with L1 to find that two of them have yellow LED rings. They’ll jump out at you to embroil you in a fight.

– Give Up: Once again, the alternative outcome is to give up. Let the time run out and wait for Hank to say he wants to leave. Agree to achieve Mission Failed (Ending).

After finding the deviant, they will attack Connor. You have to find and analyse the blue blood first and follow the trail to the group of inactive androids at the back of the warehouse.

Win Fight: Simply press the button prompts correctly to win, but you’ll have a few different outcomes to choose from.

Shoot Deviant: After winning the fight, the brown haired Traci will charge towards you. Choose SHOOT to kill her. This results in the blue haired Traci killing herself with Connor’s gun. Basically, if you kill one of them, the other will self-destruct or kill itself. This achieves the Deviants Die (Ending), decreasing your reputation with Hank as well as decreasing your software instability. We recommend not taking this route. 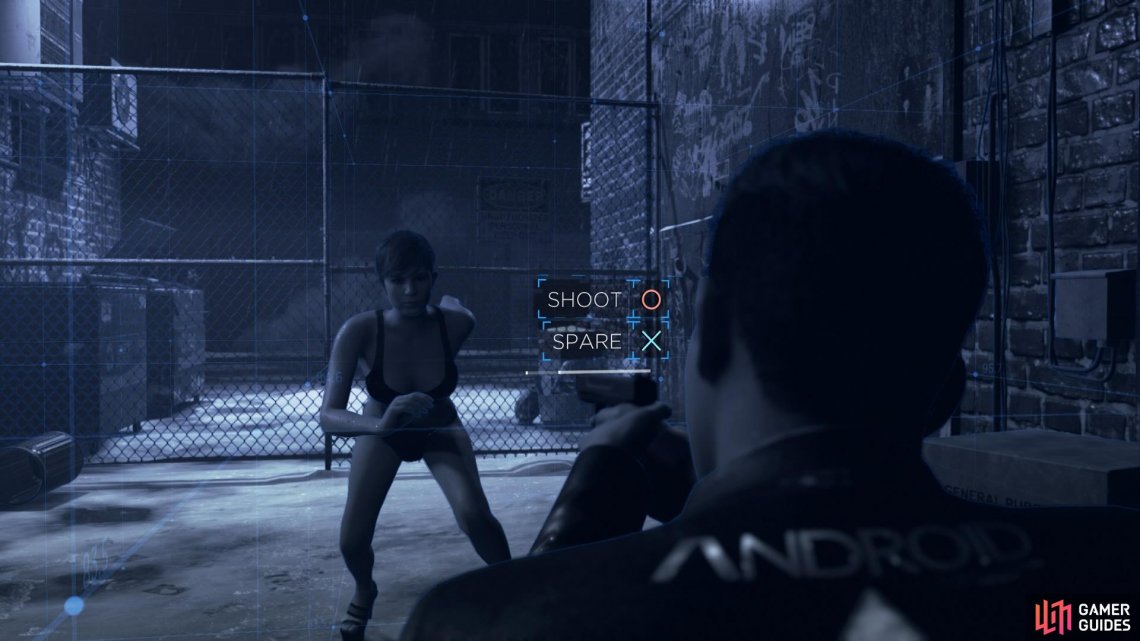 Spare Deviant: After winning the fight, choose to SPARE the brown haired Traci. This results in letting the deviants go and achieves the Deviants Escaped (Ending). Your reputation with Hank will increase, as will your software instability.

Lose Fight: Just don’t press any of the buttons when prompted.

Let Deviants Go: After losing the fight, choose SPARE. This leads to Deviants Escaped (Ending) and increases your reputation with Hank as well as your software instability.

Shoot Deviants in the Back: Or, after losing the fight, you can choose to SHOOT them. This leads to Connor Shot Deviants (Ending) and decreases your reputation with Hank as well as your software instability.

This chapter’s endings are as follows:

Keep in mind that killing them will give you an extra option to choose from later in the game. Letting them live will mostly just improve your friendship with Hank and increase your software instability. If you SPARE them (which we recommend) on your first playthrough, you can go back during your second to make different choices and unlock more nodes on the flowcharts.