This chapter sees our three main characters finally come together, which means you’ll be switching between their stories throughout rather than playing them separately as you have been doing so far. Crossroads is a long level that heavily depends on choices made previously and effects the paths and dialogue options available to you.

In this section of the guide, we’ll be taking you through Markus’ story. You can find Kara’s and Connor’s parts in the previous chapters. 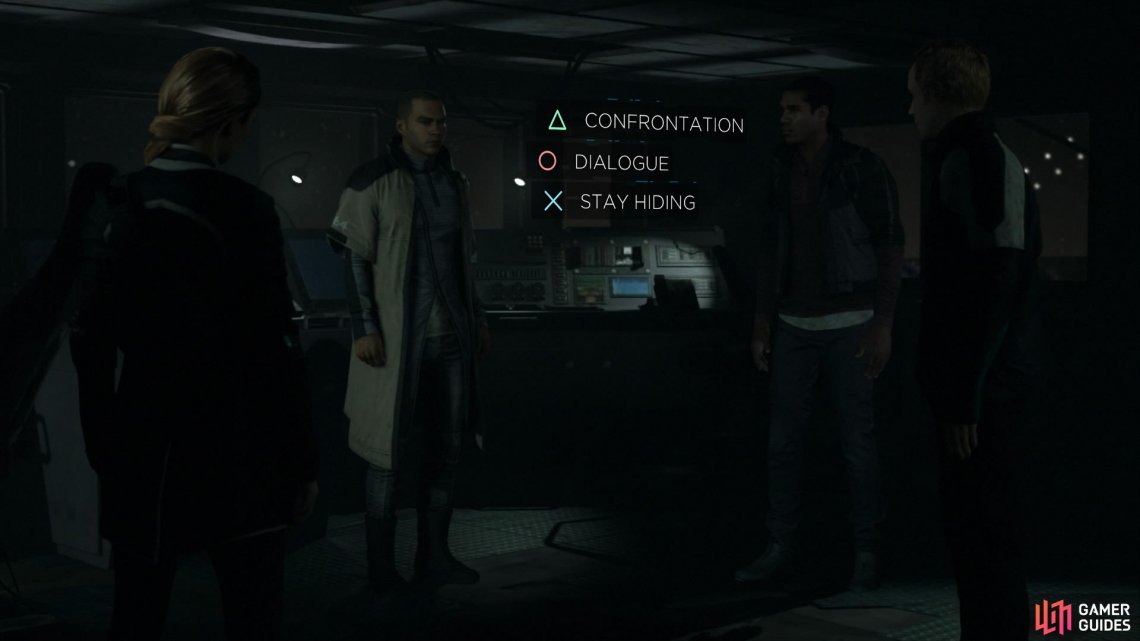 We’re going to begin in the Captain’s Cabin with North first.

– For this branch Markus has to have died during ‘Freedom March’ either by sacrificing himself, or losing the fight against the police after choosing to ATTACK. North then steps up to take over the revolution and becomes the new leader of Jericho. She remains unplayable, however, as any secenes you would have played as Markus will just be cutscenes involving North instead.

– Josh and North Discuss: Both Markus and Simon should be dead in order to get this node.

– Josh, Simon and North Discuss: Markus should be dead, but North, Simon, and Josh will all be alive.

– North Stayed Alone With Her Thoughts (ending): This is the only possible outcome if Markus is dead. North will be the new leader and continue the revolution.

Now, to cover Markus’ role in this chapter, we’ll be in the Captain’s Cabin with Markus. Obviously, to do this, Markus needs to have survived up to this point.

– Counsel with North, Simon, and Josh: Possible if all characters are still alive.

– Counsel with North and Josh: Possible if Simon has died in a previous chapter. You can get him killed during ‘The Stratford Tower’, ‘Public Enemy’, or ‘Freedom March’.

To get this mission start you have to have a very low reputation with Jericho in order for this to work. It helps if you fail the protest during ‘Capitol Park’ and chose DISPERSE during ‘Freedom March’.

– Markus Left Jericho: If Connor did not uncover Jericho and Markus’ crew are not happy with you, then it’ll force Markus to leave and end his part in this chapter.

– If Connor did find Jericho, then three other possible nodes will unlock instead: On the Rooftop, Jericho Under Attack, and Leave Forever.

– With any of those three options, Connor will end up in the corridor with Markus (outlined further down). 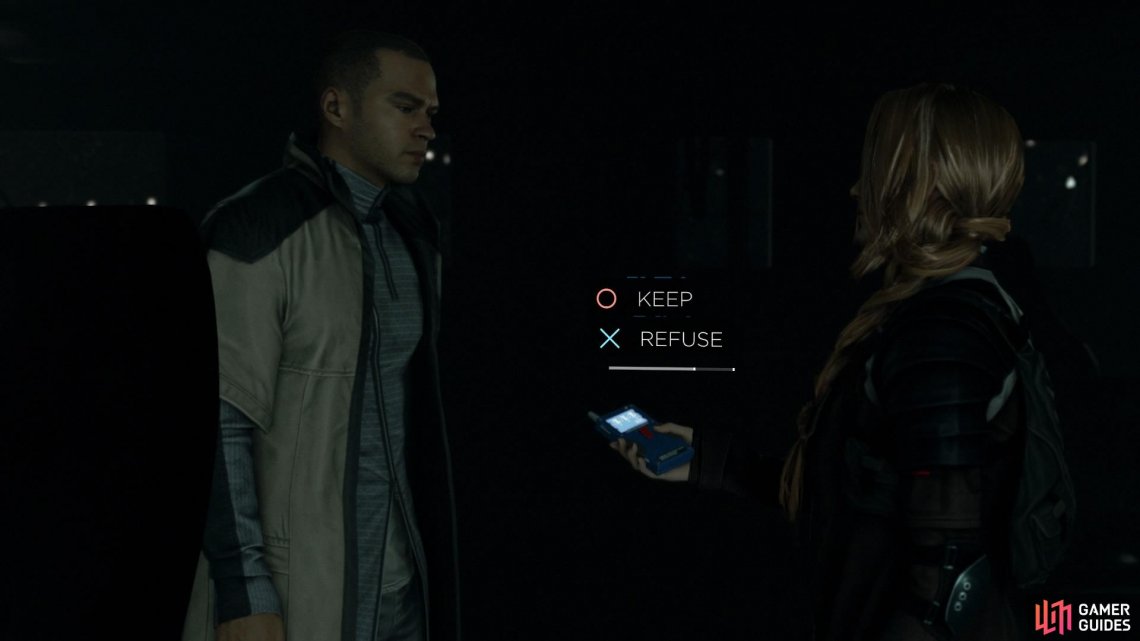 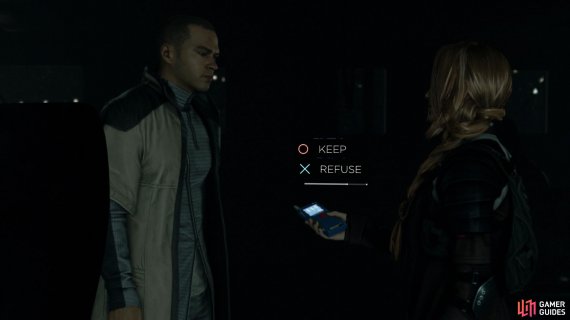 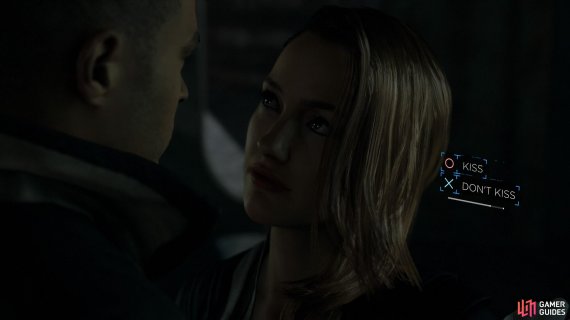 Refuse the detonator (left), Choose whether to kiss North (right)

To get this mission start you must have a good-standing, or very high, reputation with Jericho.

– Kiss/Don’t Kiss North: If you are romantic with North, you can choose if you want to kiss her or not at this point.

– North Leaves: Regardless of that first choice, North will automatically leave Markus alone.

– Markus Stays Aone with His Thoughts: This can be a possible ending to his part if Connor did not find Jericho.

Connor Watches North Leave - If Connor did find Jericho, then he will watch North leave Markus alone before he confronts him, and Markus’ story will continue.

Jericho Under Attack - As a result of Connor finding Jericho and confronting Markus, the soldiers will come to attack Jericho.

BRANCH - IN THE CORRIDOR WITH MARKUS

This branch only opens up if you began with PATH - DISCUSS WITH NORTH. 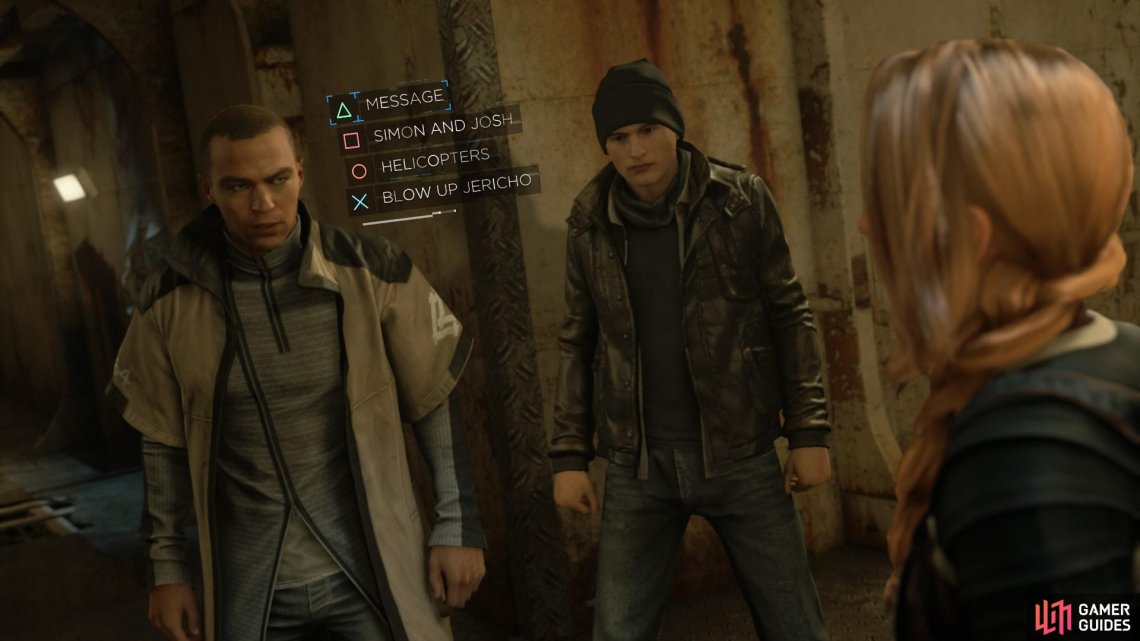 Meet Your Team/Try to Escape - Both of these things will happen automatically as you meet your crew in the corridor during the attack. The latter will occur as soon as Markus chooses to blow up Jericho - a choice that you will end up with no matter what happens, so don’t worry about it too much.

– Wrong Way/Out of Time: Either run in the opposite direction, or just stand still until Markus gets shot.

– Soldiers Shoot Markus/Markus is Wounded: This is the result of going the wrong way and running out of time, Markus will not be killed by doing this, so he can continue onward.

– Soldiers Kill Markus: If you continue to run towards them, however, then the third hit will kill him. This results in Markus Killed and Jericho Captured and will end his part.

Meet Lucy - Instead of getting shot, head down the corridor to meet Lucy (the android will cables protruding from her head). This will also happen automatically if you run out of time.

– A Bridge Breaks Under Markus: After finding Lucy, this will happen automatically, and Markus will fall into a room with some soldiers patrolling the area.

BRANCH - MARKUS IN THE CORRIDOR

Sneak Around the Soldiers/Soldiers Threaten Android - These two things will be automatic, and you can choose whether or not to intervene. 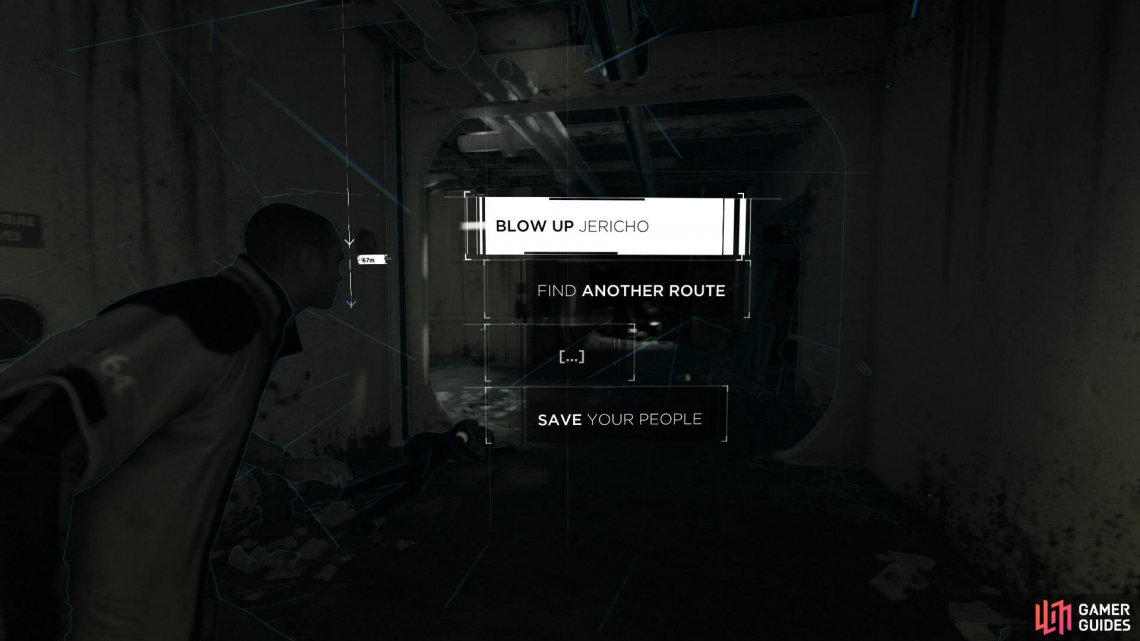 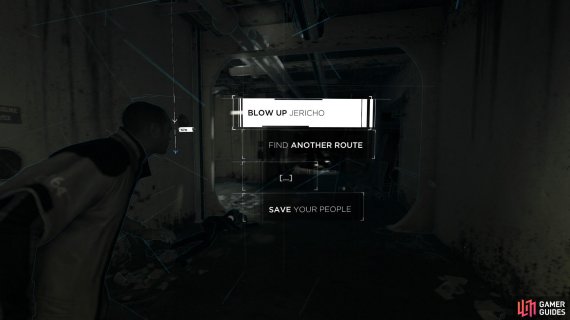 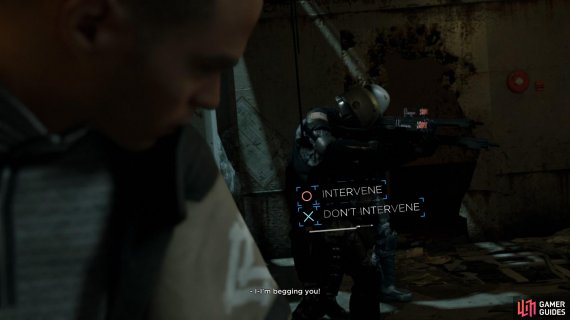 Find a way out of Jericho (left), Save your fellow androids along the way (right)

– Deal with Soldiers: Win the fight against the soldiers by successfully completing the button sequence.

– Androids Escape: The result of winning the fight.

– Get Shot: Don’t press any buttons when fighting the soldiers and they will shoot Markus.

– Markus Wounded: If Markus didn’t get shot in the corridor before, then he will only be wounded and he won’t die.

– Markus Collapses: If Markus was shot in the corridor previously, then losing the fight here will cause him to get shot again and he will die.

– Markus Killed and Jericho Captures: If Markus was shot in the corridor, won the fight against the soldiers and freed the androids, but was shot again in the process, then Markus will die and this will end his part.

If you choose DON’T INTERVENE then the androids will be killed by the soldiers.

Progress to the Next Corridor/Soldiers Coming Markus’ Way - If Markus makes it this far, then this will be unmissable.

– Jump Soldiers: You’ll have a 10 second timer - run straight at the soldiers and jump over them.

– Climb Away: You’ll have a 10 second timer - climb the wall to your left instead of running at the soldiers.

– Time Out: You’ll have a 10 second timer - let it run out and the soldiers will shoot Markus. If he was hit before this, the shot will kill him. This will result in Markus Wounded, Markus Collapses, and Markus Killed and Jericho Captured.

– Knock Out Soldiers: After you get past the 10 second timer, you can interact with a rope on your right. If you go too far, you’ll miss this opportunity. Use the rope and knock out the soldiers so that the Androids Escape.

Approach Hold/Josh Fighting Soldier - If you make it this far, this will be automatic. You’ll find Josh going against a soldier and you’ll be given another choice. 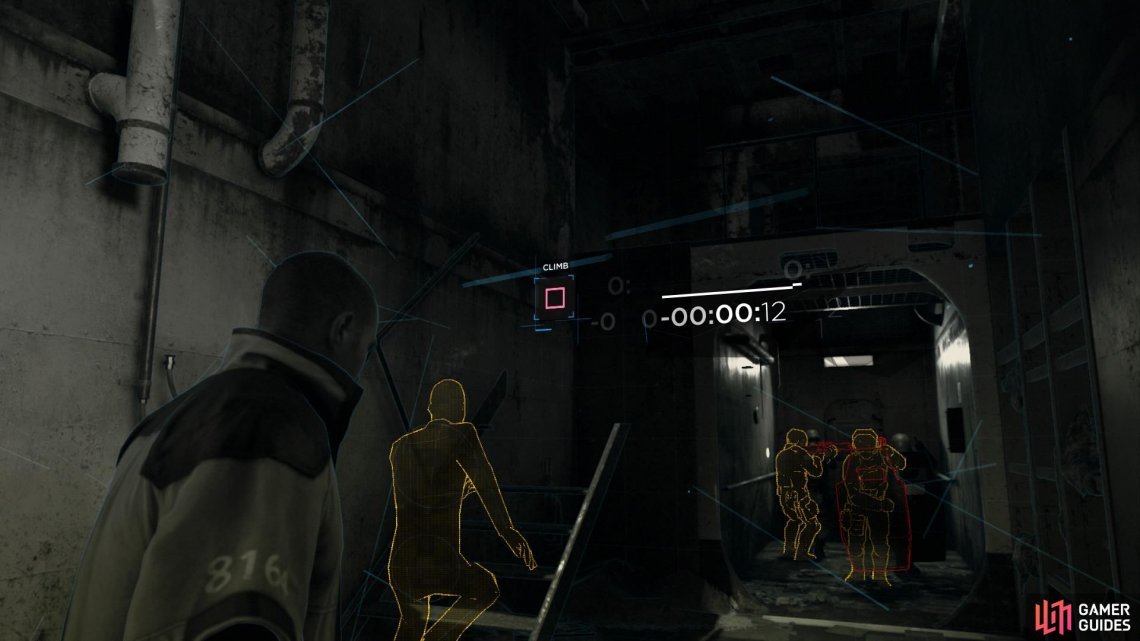 (1 of 2) Avoid the soldiers in the corridor 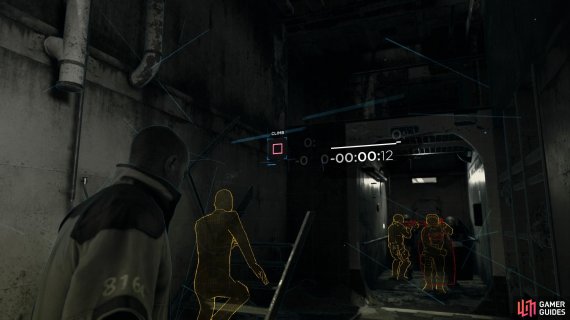 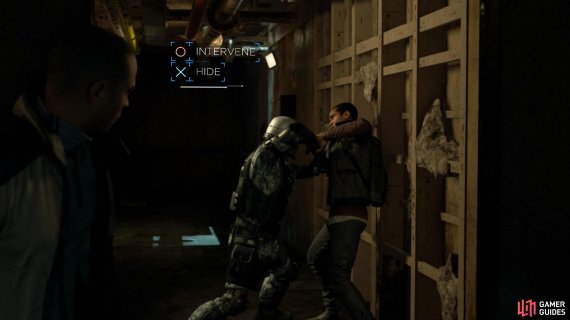 Avoid the soldiers in the corridor (left), Save Josh (right)

Neutralise Soldiers/Josh Escapes - Simply win the fight by pressing the correct button prompts and Markus and Josh will get away.

Lose the Upper Hand - Simply lose the fight against the soldier, which can result in:

– Josh Gets Shot by Soldier

– Josh Sacrifices Himself: If your reputation with Josh is in good standing, then he will save Markus. This is followed by Comfort Josh as he lays dying.

Choose HIDE, which can only have one result: the soldier will kill Josh.

BRANCH - IN THE HOLD WITH MARKUS

If Markus is still alive at this point, then Markus Will Enter the Old Control Room automatically, followed by Connor Interrupts in which Markus and Connor will proceed to get caught up in a brawl. This will only happen, though, if Connor chooses to remain a machine.

– Fail to Reach Gun: Don’t press any buttons and lose the fight. This results in Connor Shoots Markus and Markus Was Killed, ending his part.

Soldiers Interrupt - This will occur if Connor chose to become deviant, in which Markus will then go up against the enemy in the engine room. 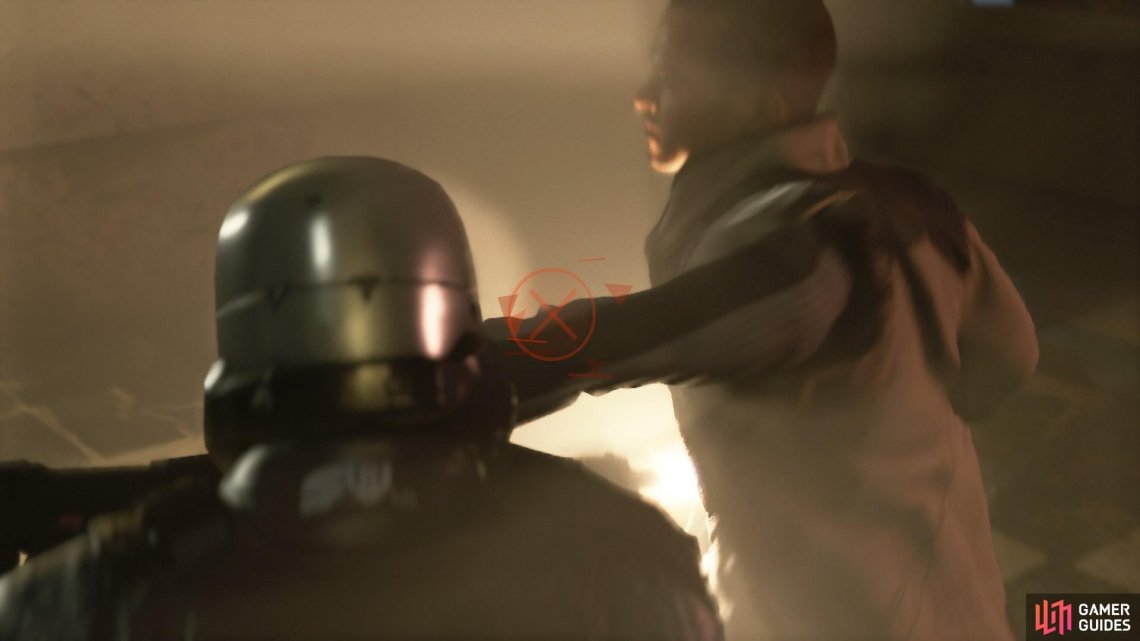 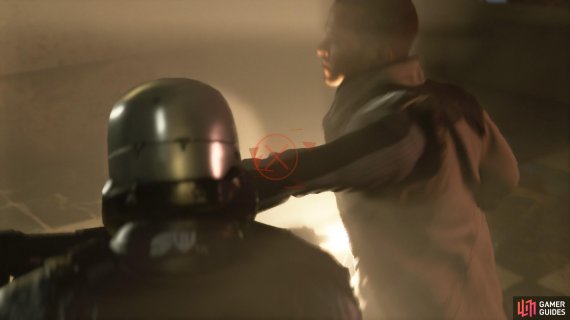 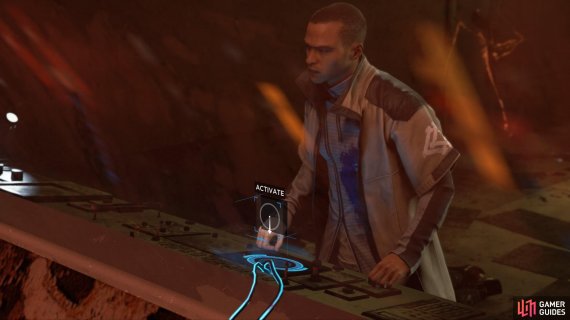 Fight off the soldiers (left), Activate the bomb (right)

– Neutralise/Fail to Neutralise: To neutralise them, just win the fight. If you fail to do so, then Markus is Killed and Jericho is Captured, ending his part.

BRANCH - IN THE CORRIDOR WITH MARKUS

Join the Others/Try to Escape - This is automatic if Markus is still alive for this chapter.

– Lose Too Much Time: If you stand around doing nothing after you set the bomb, then Markus will get shot, and North will escape with the rest of the crew (provided they are still alive at this point) and Connor. This results in the ending Markus Died Buying Time for Jericho.

– North is Shot: On your way out of Jericho after setting the bomb, North will get shot in the corridor.

– Save North: We recommend going back for her (Deviant Connor will help you) so that you can continue to play out the romantic relationship to the very end. While saving her, Connor Protects Markus and North from the looming soldiers. If Markus is not around during this chapter, then Connor will step in with the possibility of dying in the process of saving her.

– Fail to Save North: You can choose to just leave her behind by not pressing anything, or you can activate this node by failing to save her as Markus and have Connor run in to save Markus instead. This can also result in Connor dying, too. 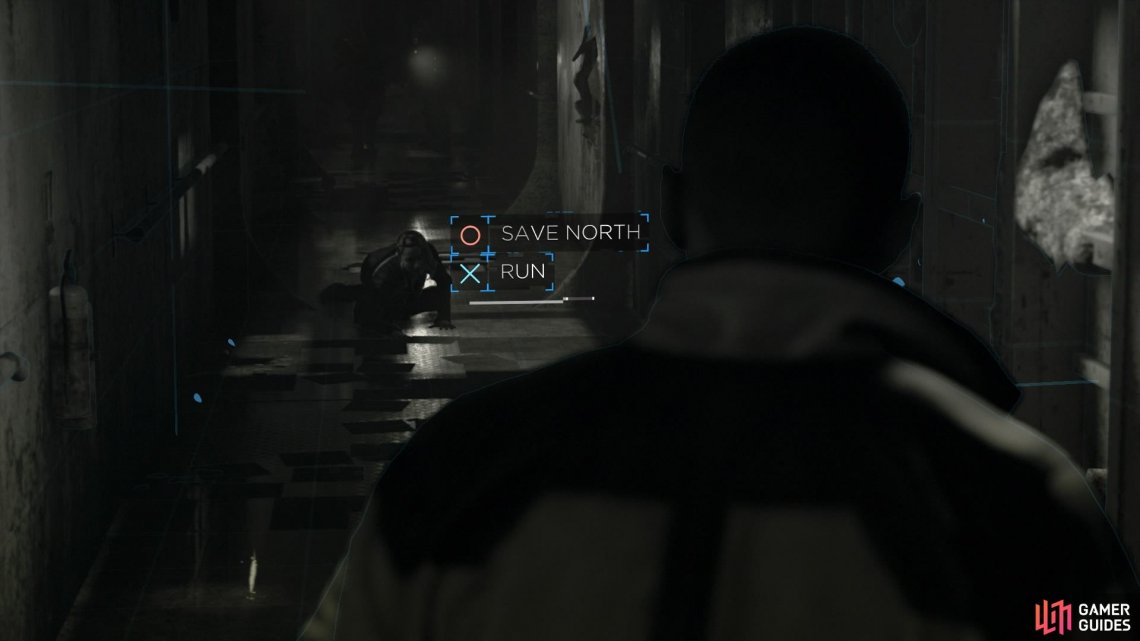 – Run Away: You can simply run away from North and she will get left behind and die.

– Markus Jumps: If Markus reaches the end of the chapter, he will jump from the ship, and his crew (if they are still alive) will jump with him, including a deviant Connor. This results in Markus Fled With His People.

And that ends Markus’ chapter!