There are two possible ways to begin this chapter depending on how things have played out for you previously. Hopefully, Connor did not die in the last chapter, but we’ve outlined both mission starts anyway, just in case.

This chapter is short, but as always, important. As usual, navigate the good options.

The first can only occur if Connor died during the chapter, ‘Public Enemy’.

– Wait for Hank: Just sit back and watch the opening cutscene until you have control again.

– Hank isn’t Pleased to See Connor: During the opening cutscene, it’ll be clear that Hank is not happy about the new Connor. 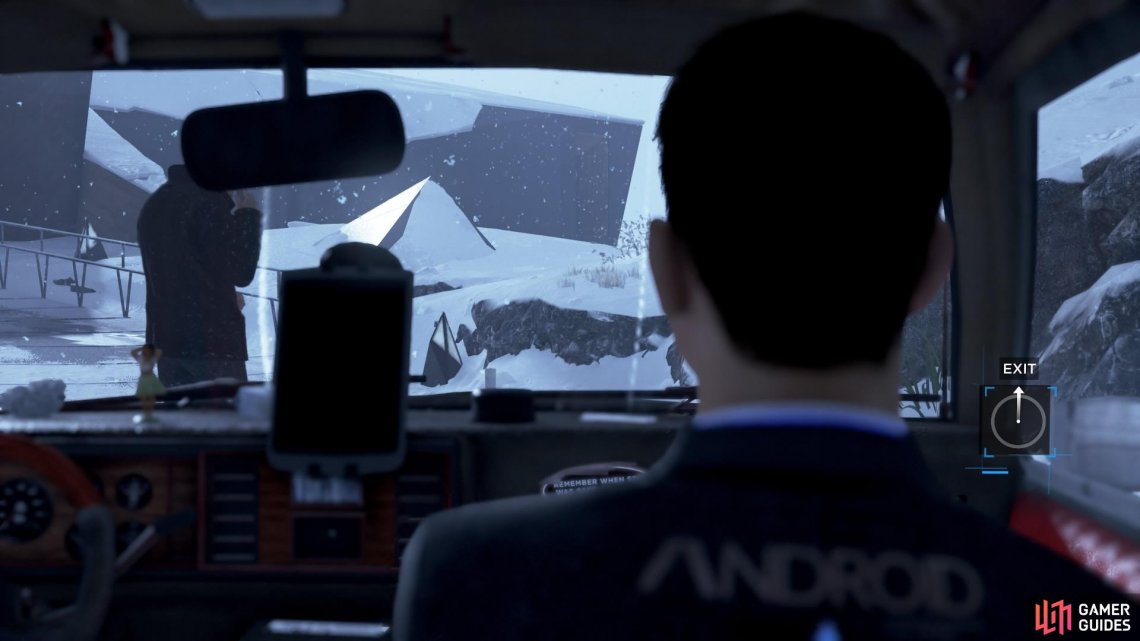 (1 of 2) Exit the car to activate a cutscene 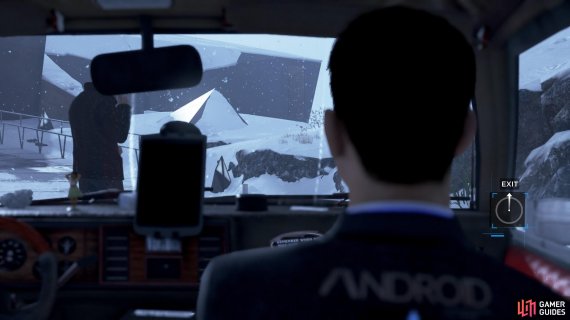 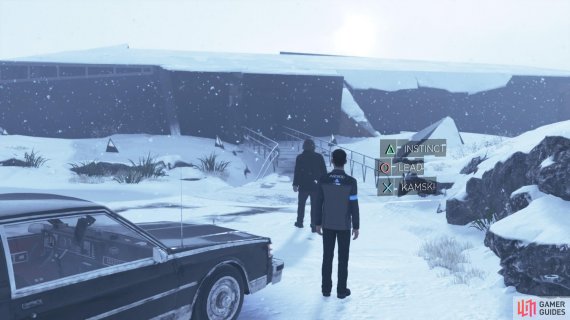 Exit the car to activate a cutscene (left), Talk to Hank (right)

The second can only occur if Connor survived the entirety of the chapter, ‘Public Enemy’.

– Arrive with Hank: Connor and Hank will arrive at Kamski’s place together.

– Get out of the Car

– Learn that Chris is Dead: This is a cross-chapter impact event. If during ‘Capitol Park’ you had Markus lead a violent protest and shoot the two cops at the end of the level, then Hank will inform Connor that one of them was Chris (an officer you meet frequently during Connor’s story).

– Learn Chris Survived: This is a cross-chapter impact event. If during ‘Capitol Park’ you had Markus spare the two cops at the end of the level, then Hank will inform Connor that Chris survived.

And those are the two possible mission starts! Regardless of which one you get, the chapter will continue in a linear fashion. The next four objectives are unmissable. 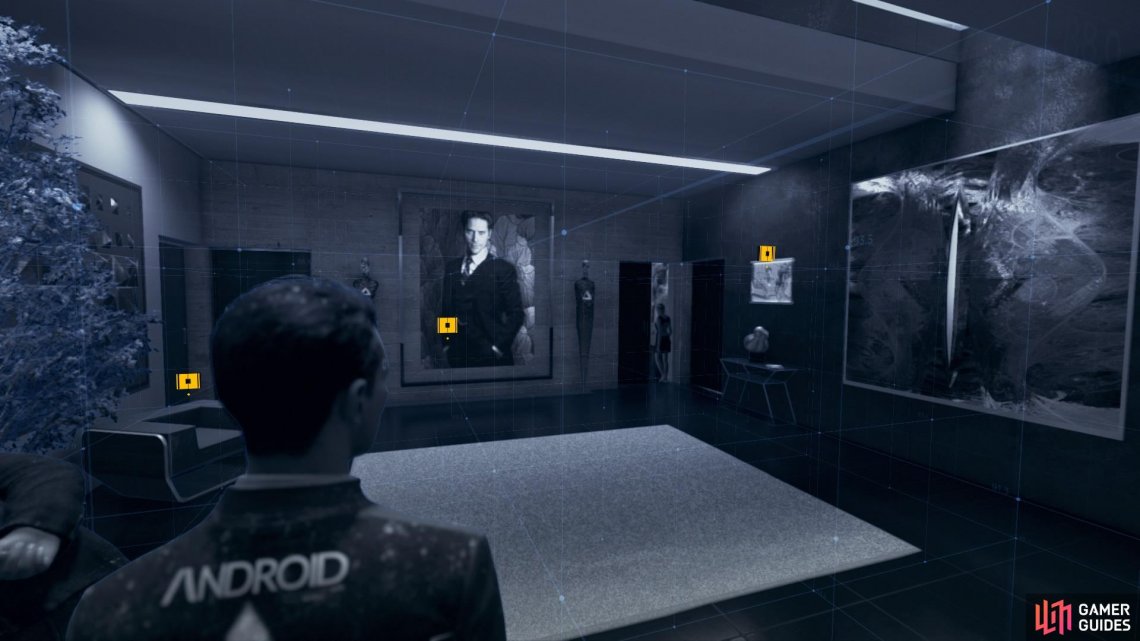 (1 of 2) Investigate the yellow markers while you wait 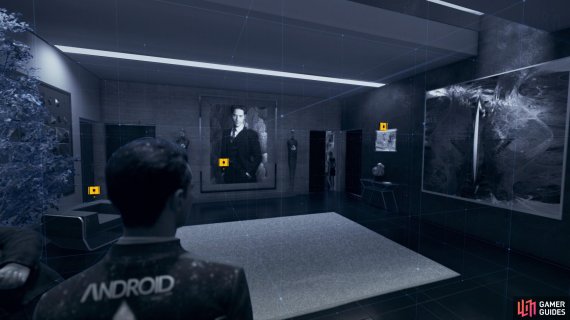 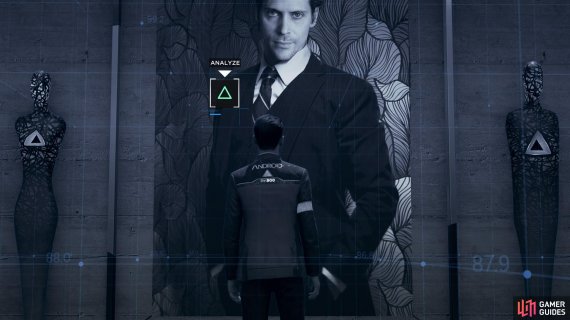 Wait for Kamski – While you’re waiting in the lobby, Hank will take a seat and you can press R2 to scan the room for objects to interact with. It’s important here to analyse everything.

– Analyse Painting: Check out the portrait of Connor’s maker, Kamski, by pressing triangle.

– Analyse Portrait: Next to the door that Chloe went through is a portrait on the wall. Press triangle to analyse it – you can’t read the magazine until you do this.

– Magazine: Now pick up the magazine directly underneath the portrait. Read both articles to make it register. 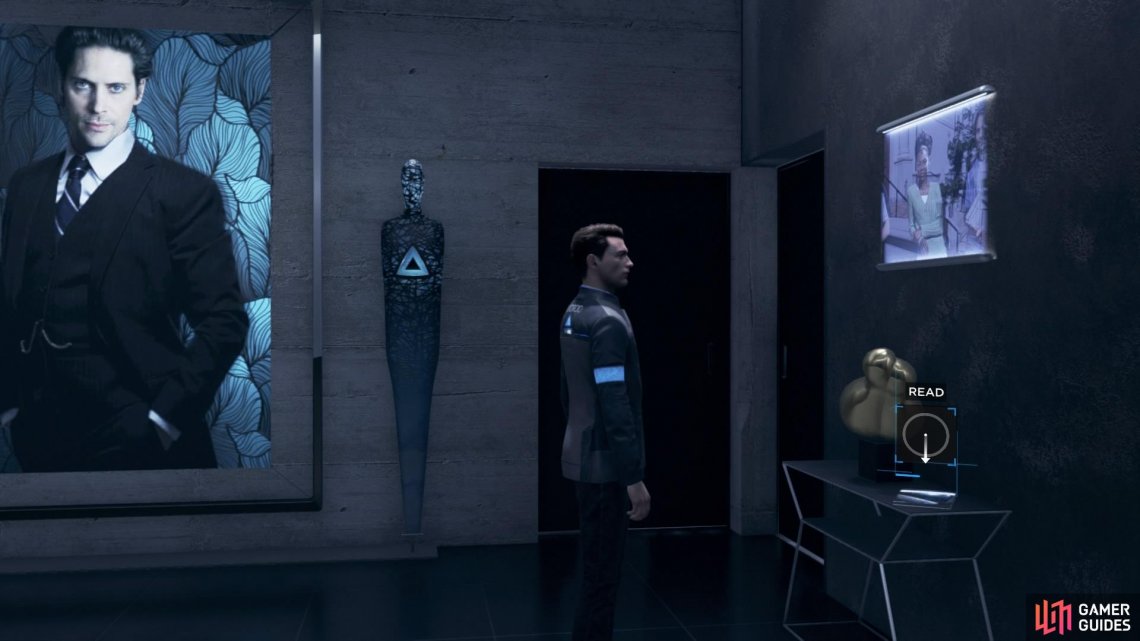 (1 of 2) Analyse the photograph first to unlock the magazine 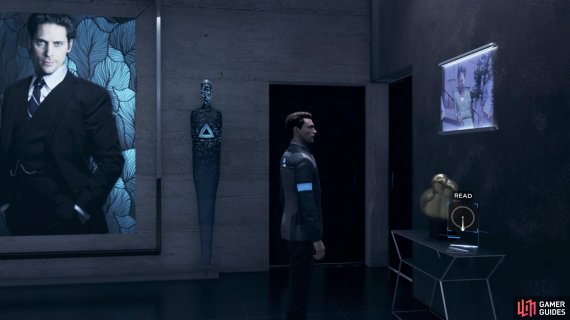 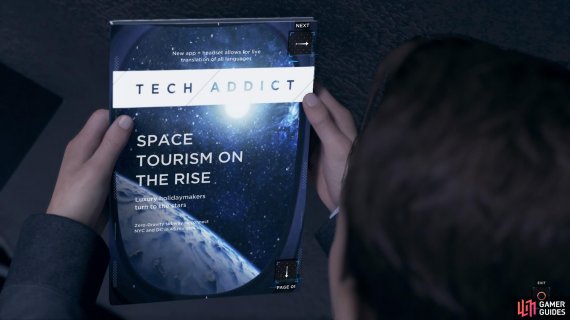 Analyse the photograph first to unlock the magazine (left), Read both articles (right)

– Analyse Sculpture: On either side of the painting of Kamski are two stone sculptures. Analyse either of them by pressing L1 to view them.

– Talk to Hank: This will happen automatically – he’ll speak to you several times while you’re looking around the room.

After Chloe Returns – She’ll eventually come back for you and take you through to the other room. The following four objectives are unmissable.

– Chloe Returns
– Meet Kamski
– Question Kamski: Throughout your meeting with him you’ll have a conversation with optional dialogues that won’t affect anything.
– Kamski Test: This is unmissable – Connor will always be put through the test no matter what has happened up to this point in the story. 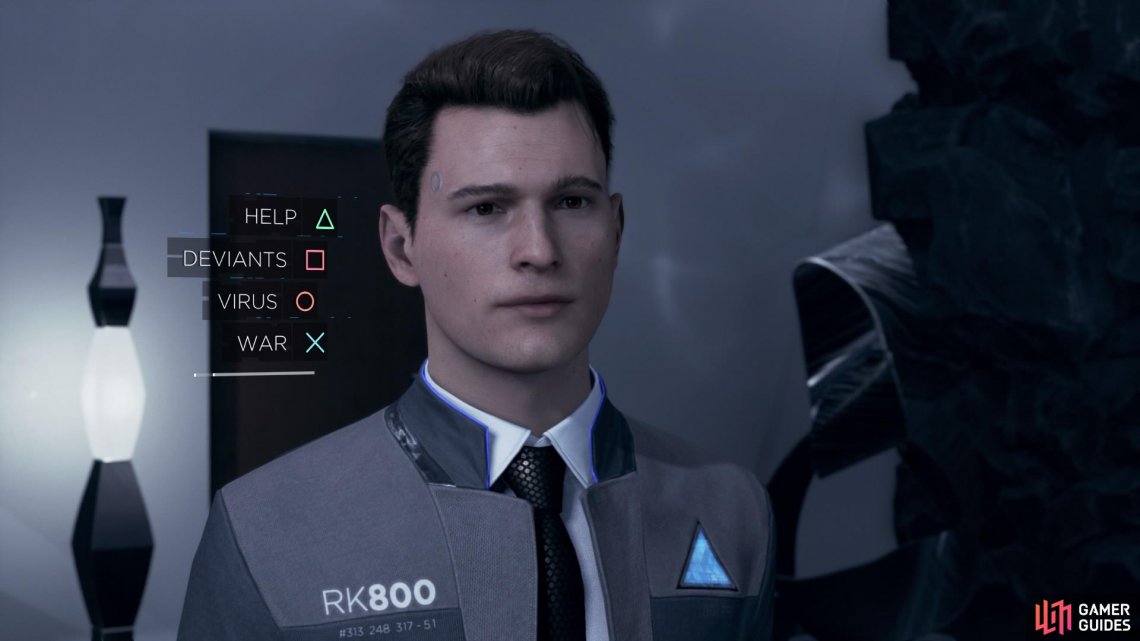 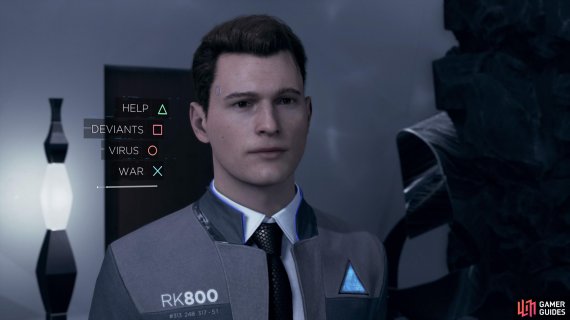 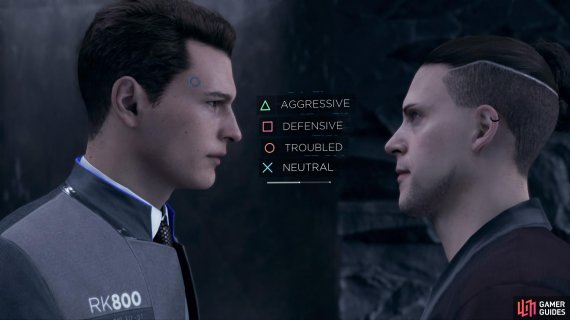 Talk to Kamski (left), Choose any of the dialogue options (right)

Once you are faced with the Turing Test, there will be two possible outcomes. Kamski offers to give you important information if you shoot the Chloe android, proving that you are just a machine, and nothing more. If you don’t shoot her, you forfeit any information that he could possibly give you.

Shoot Chloe – During the test, choose SHOOT. This will decrease your software instability and your reputation with Hank.

Kamski Agrees to Answer a Question – The result of shooting Chloe is information, and you get to choose which question to ask.

– VIRUS: Kamski will explain how androids can become deviant, and how quickly this phenomenon spreads. It’s an interesting piece of back story, therefore worth replaying the chapter to hear it, but it’s of no real use to Connor’s investigation.

– rA9: Kamski doesn’t actually know what rA9 is, but he does have his own thoughts about it.

– JERICHO LOCATION: This is the information Connor wants the most and is the most useful to his investigation. This is followed by Kamski Offers Jericho Key and Connor will Download Jericho Key, which will in turn have a cross-chapter effect.

Leave Kamski’s House – After you get the information and the cutscene is over, you’ll automatically leave his house.

This will then automatically unlock Hank was Disappointed in Connor’s Decision because he chose to shoot the Chloe android without hesitation. 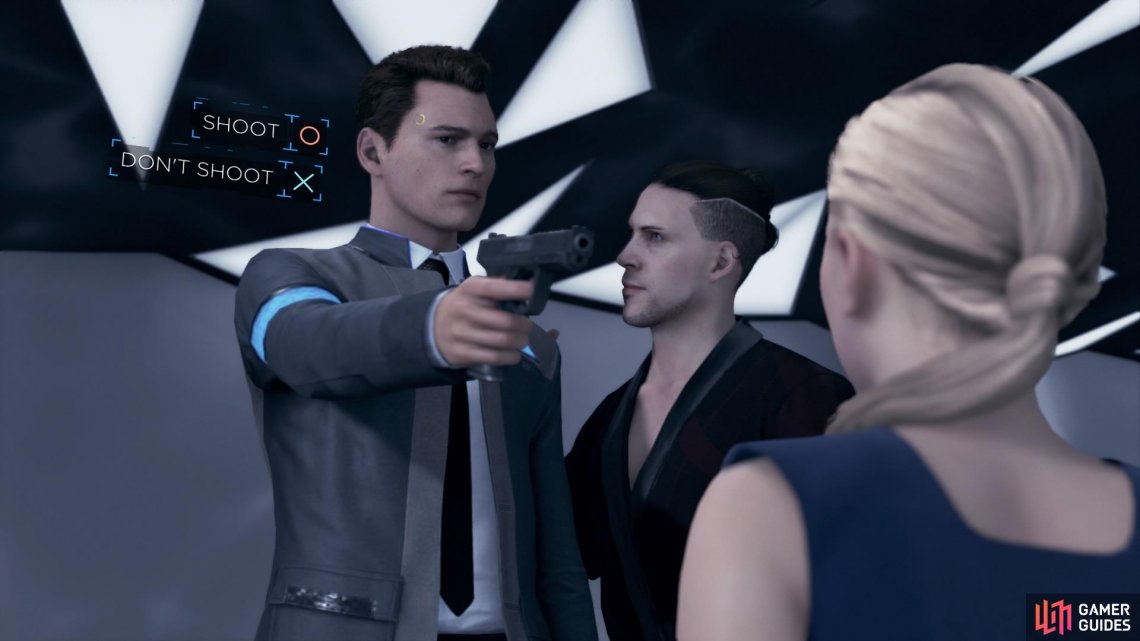 Spare Chloe – During the test, choose DON’T SHOOT. This will increase your software instability as well as your reputation with Hank.

Leave Kamski’s House – Because you didn’t shoot Chloe, you didn’t get the opportunity to press him for information, and you’ll lose out on obtaining the Jericho key. Instead, Hank will drag you out of the house, insisting you should both just leave.

This leads to Hank thought Connor made the Right Choice. He’s happy that Connor decided not to shoot Chloe just for the sake of the mission, and while Connor feels a pang of failure over it, you’ll most likely have reached friendship status with your partner.

Both paths outlined above end the chapter.