During the chapter ‘The Painter’, you can spot some origami figures on a bookshelf at the back of the room on the left side. These pieces are of course made famous by Quantic Dreams’ first title, Heavy Rain.

During ‘Battle for Detroit’ there will be a scene where Kara picks up a gun off the ground, and in the background is a movie theatre. While the colouring makes it difficult to read the titles on the board, the movies are Heavy Rain, Beyond 2 Souls, To The Infinite and Beyond, Noman Soul, and Jungle 2.

Heavy Rain and Beyond 2 Souls are direct references to Quantic Dreams’ previous games of the same titles, and To Infinity and Beyond is commonly associated with Disney’s Toy Story franchise.

It’s unclear what Noman Soul and Jungle 2 might be a reference to, if anything.

During ‘The Painter’ you can choose to have Markus play the piano while Carl eats his breakfast. The music he gets to play is directly from the game’s soundtrack, initially written as Kara’s theme song.

During ‘Broken’ you have to search the junkyard for replacement parts for Markus. Once he has his legs (and before you climb the slope), head to a nearby corner to find an android head on the right side of the slope.

The android head will sing something in Japanese, a reference to the way Kara sings in the short film ‘Kara’ that acted as a teaser for Detroit: Become Human years before it was announced to be released.

During the end of Markus’ story in chapter ‘Battle for Detroit’, you’ll have the option to end the game peacefully by either kissing North or choosing to sing. If you choose to sing, Markus and the other androids will harmonise on the original music used for Detroit’s first teaser trailer.

During ‘Capitol Park’, when choosing to be pacifist, you’ll start to tag benches. You get the option to choose between four symbols which you’ll go on to carry with you for the remainder of Markus’ story.

One of the symbols is actually a reference to the character of Jodie Holmes in Quantic Dreams’ game Beyond Two Souls. It’s the one that looks like a peace sign, selected by pressing X.

Chloe is your personal main menu android who speaks to you every time you load up the game and return to the menu. She says many different things, ranging from welcoming you back, offering surveys for you to take, and even getting distraught when something terrible happens in the game. 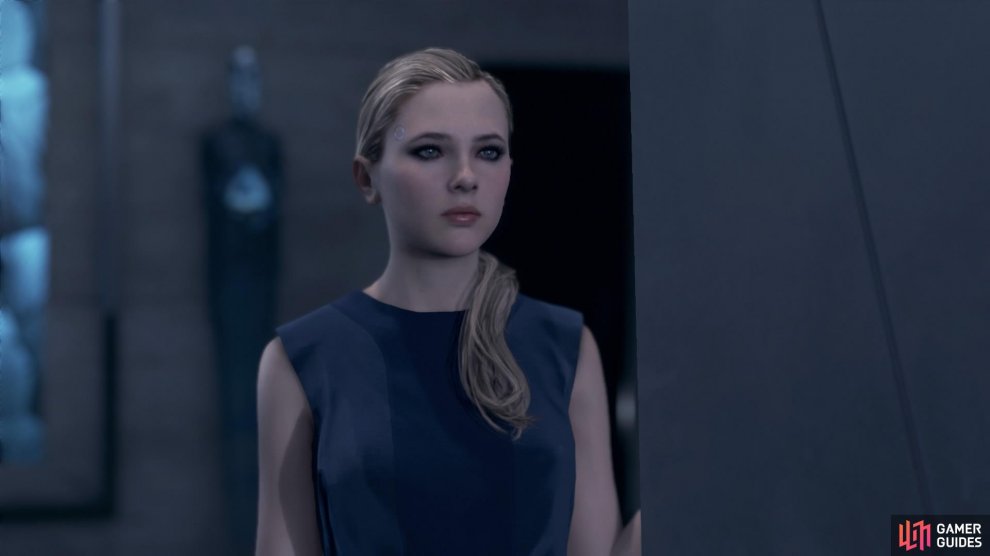 Chloe reacts to your choices quite often, as you'll be able to see a physical change in her facial expressions each time you return to her screen. Once you have finished your first playthrough and return to the main menu after the credits, Chloe will ask permission to leave.

If you say no, she will reset her program and have a clean slate for when you begin a new playthrough. If you allow her to go, she will leave the menu screen and won’t return. You’ll discover that when you boot up the game again, Chloe will be gone.

If you managed to go an entire playthrough down the peaceful route (which means you didn’t kill anyone and none of the main characters died), you’ll get a secret ending after the credits have rolled featuring Connor and Hank meeting up to share a hug.

Alternatively, if you played entirely violent and everyone died by the end of the game, then you’ll return to the Zen Garden with Amanda where she tells Connor that he will be decommissioned and replaced.

In chapter ‘Battle for Detroit’ is a subtle reference to the game franchise, Hitman. While being escorted to the elevator by the CyberLife guards, you’ll be able to spot that one of the guards is named ‘Agent 47’.

If you manage to kill Connor at every given opportunity throughout the game, you will earn a trophy called I’LL BE BACK. This is in fact a direct quote and reference to the famous movie franchise, Terminator. The line itself, of course, belongs to Arnold Schwarznegger.

There is also the possibility that Connor’s name is inspired by the character, John Connor.