This chapter has many options and outcomes at every turn, and will most definitely require multiple playthroughs to complete the flowchart.

We begin with Markus sitting on the roof as he contemplates his life.

Magazine – As soon as you have control, take a few steps to the left of where you begin. Look down to the floor to see it and read both articles to make it register. 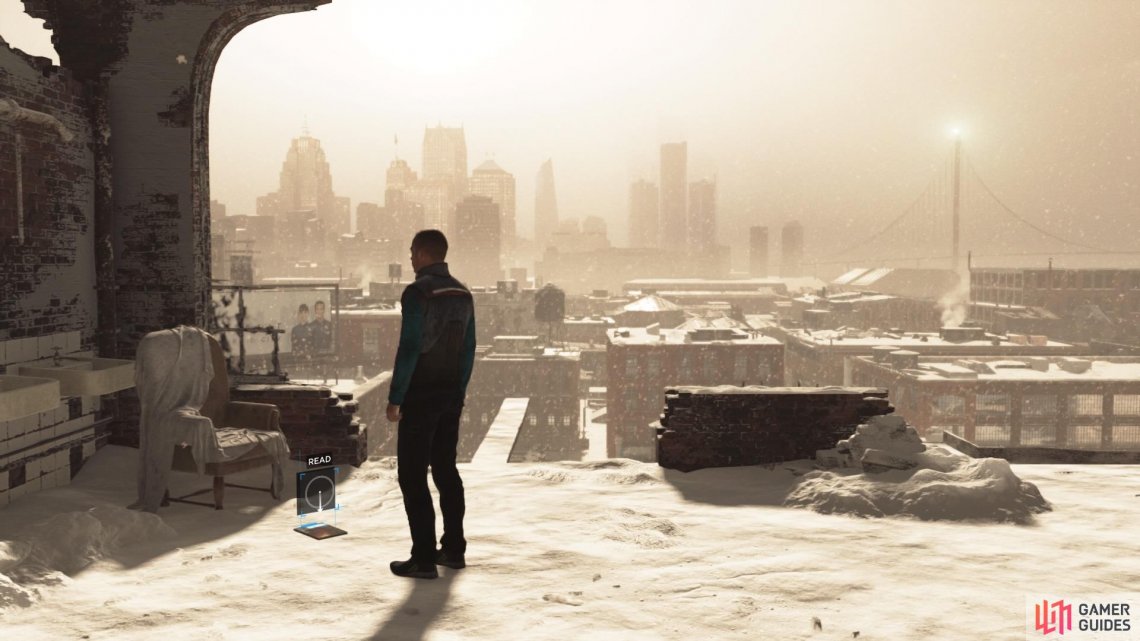 (1 of 2) The magazine is immediately to your left 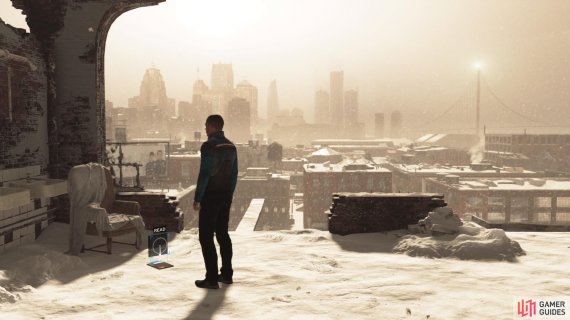 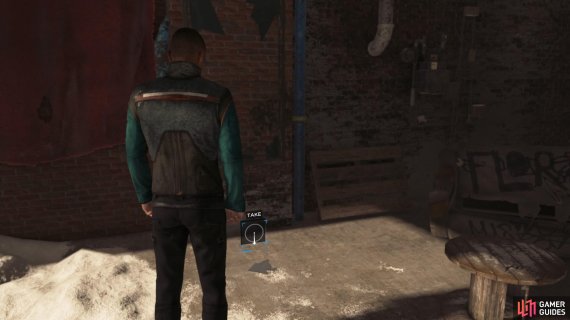 The magazine is immediately to your left (left), Find the mirror on the right side behind you (right)

Look at Broken Mirror – On the right side, a little behind you, is a broken mirror shard. You can use R2 to highlight it with a yellow marker.

Play Piano – Much like you had the option to play the piano in Carl’s house, you can go to the piano on the right side of the roof here and sit down to play. 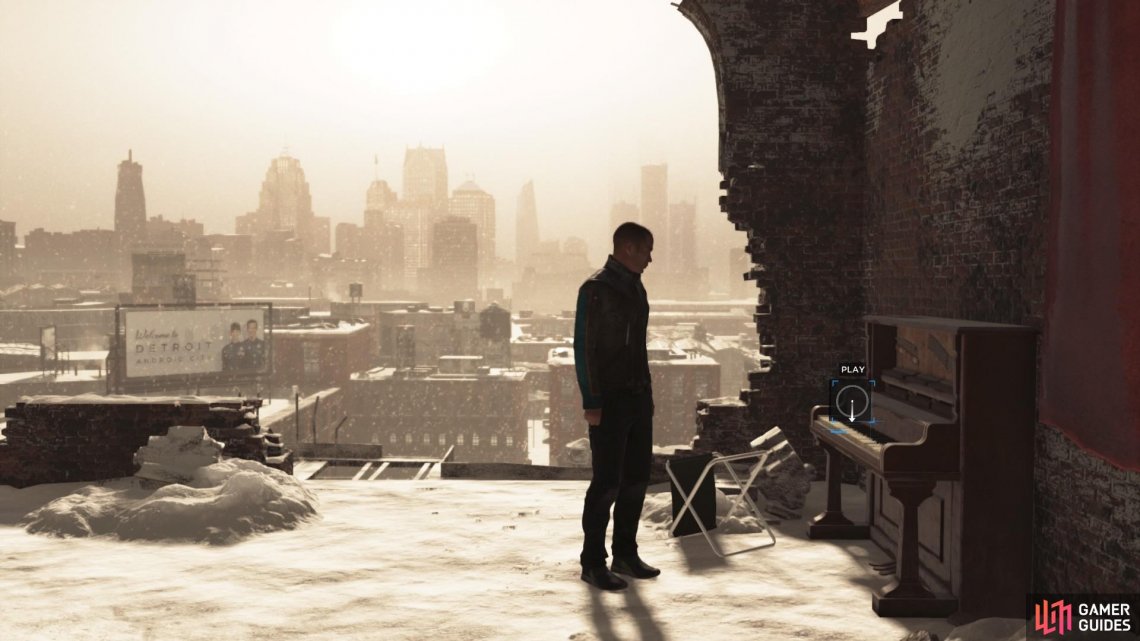 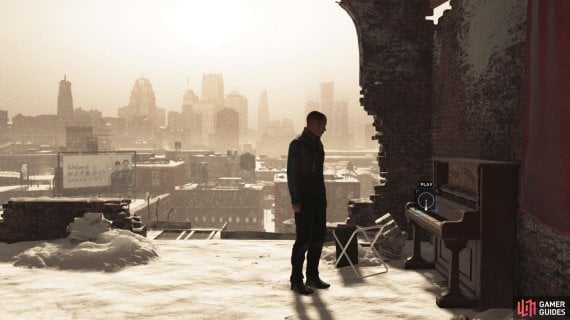 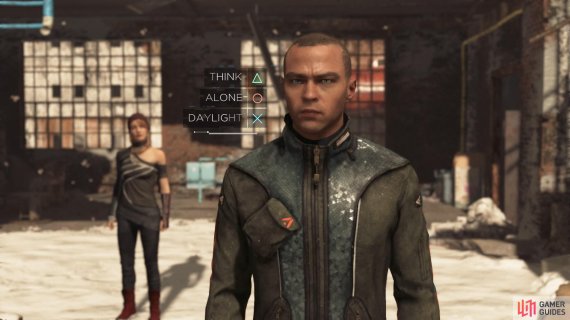 Use the touchpad to play the piano (left), Talk to North (right)

After a while, North will automatically show up to talk to you. You’ll be given a few different options, but the main thing to accomplish here is the unlocking of a vital choice that will be important in a later chapter.

Hide Past – Alternatively, choose to AVOID.

Ask North About Past – Choose NORTH’S PAST, followed by UNDERSTANDING and TRUST.

Share Memories – This is the important node to unlock and has a cross-chapter impact later. This is only possible if you have high reputation with North at this point in the game, then you can choose NORTH’S PAST. If you follow it up with UNDERSTANDING and TRUST, you’ll be able to connect with her which then boosts your reputation with her to ‘lovers’. From here there will be several opportunities to kiss her throughout the game, and it will also be necessary as a way to complete the pacifist playthrough. We recommend going this route in order to open up all of the later opportunities. 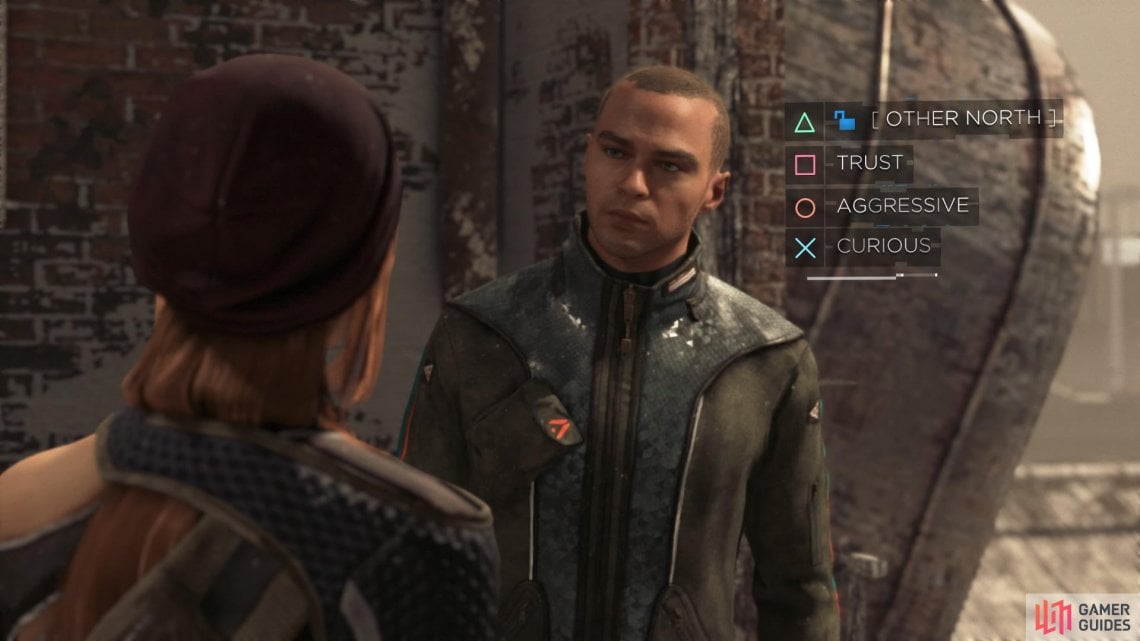 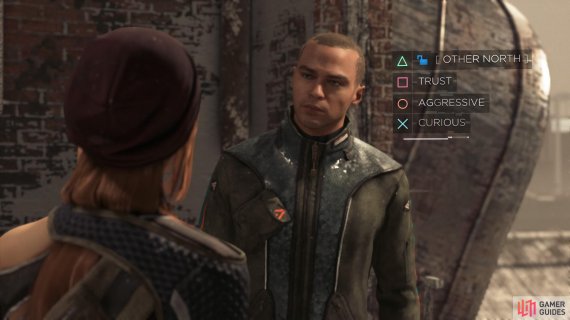 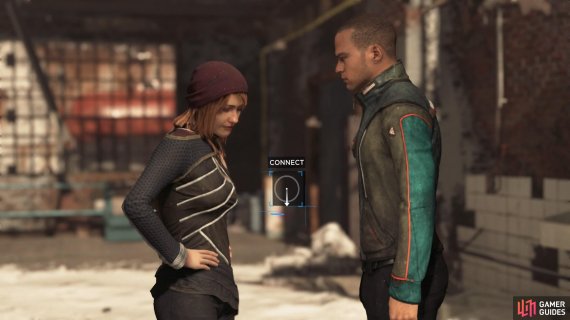 North Leaves – If, however, you have low reputation with North at this point, then choosing NORTH’S PAST will only make her distant and leave. As you can predict, this locks important options for the remainder of the game.

Simon Survived – If Simon was wounded and left alive on the roof of the Stratford Tower, and Connor did not find him, then he will finally return to Jericho and he and Markus will share a moment.

Afterward, the game will cut to Markus and his friends at the mall. They’ve got a plan, and now it’s time to carry it out. These are all the things you can do to prepare for the freedom march:

Convert Android Vendor – From your starting position, find the vendor on the right side and interact to convert it.

Convert Personal Android – You’ll find this one on the right side at the very end carrying shopping bags.

Convert Android Cleaner – Found on the left side of the mall. 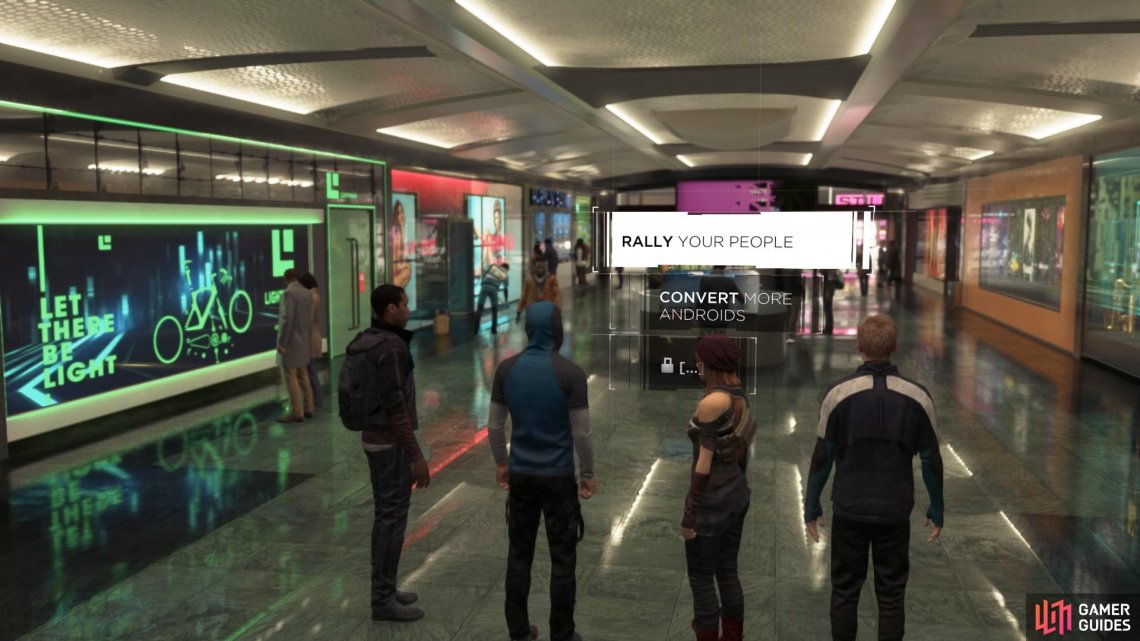 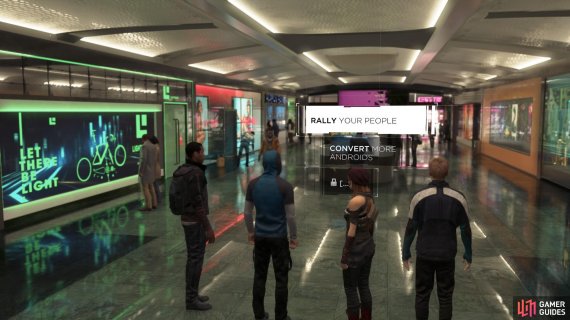 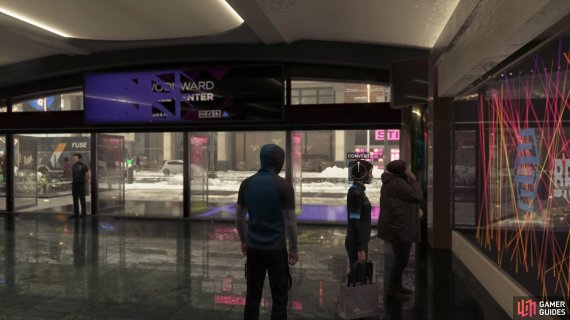 You’ll find androids on the left and right (left), Convert them all to have them join your ranks (right)

Convert Security Android – Right at the end as you exit through the doors.

Convert Parked Androids – When you leave the mall, look to your left to find a single android and then to the right to see two more.

Convert Personal Android – In front of a big truck you can convert the android standing by its owner. The owner will try to top it from walking away, leading to two choices:

Prepare the March – This is an automatic objective as soon as you convert at least one android in the area.

Convert Delivery Androids – There are two androids on the far left side outside the mall.

Delivery Androids Block the Road – Once you have converted them they will automatically block the road. 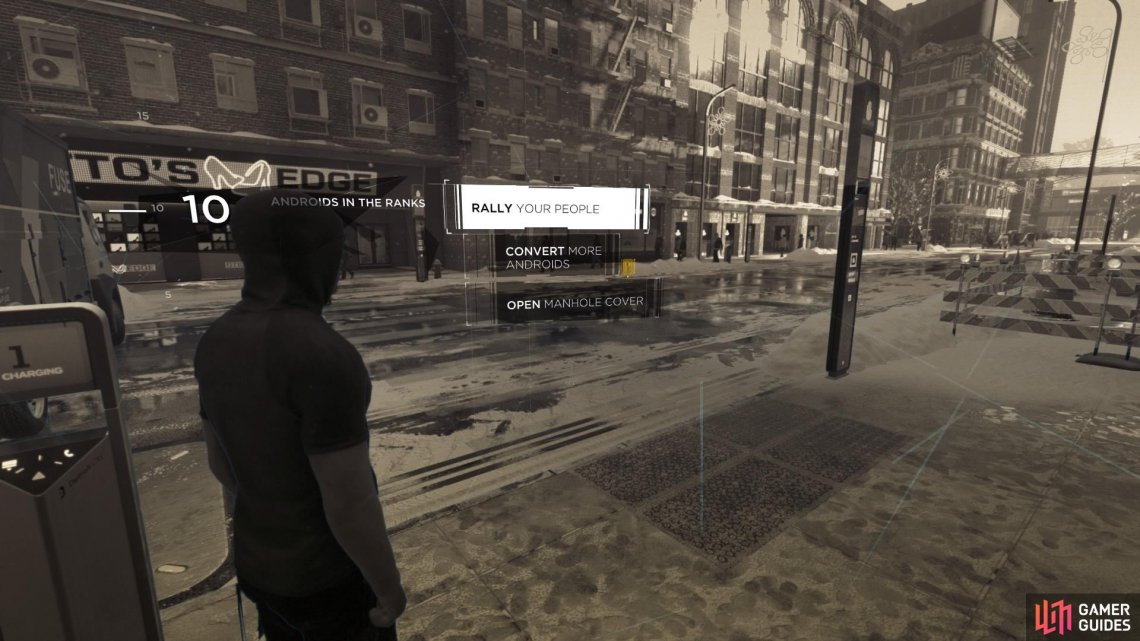 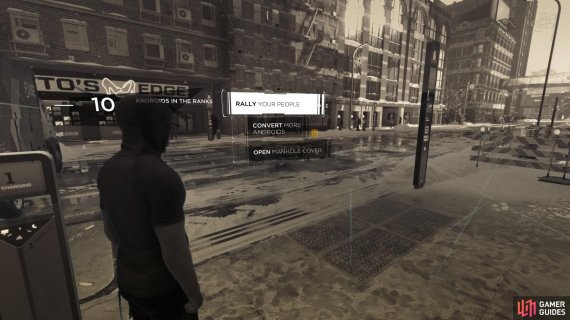 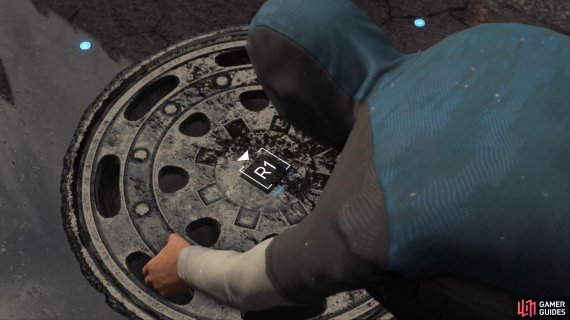 Find the manhole cover highlighted with a yellow marker (left), Open it up to bring more androids into the street (right)

Open Manhole – After the road is blocked, interact with the manhole cover in the road, and then the march will begin.

Convert AX400 – Look to your left to see the android that looks just like Kara. Use R1 and X to convert her.

Convert Android Worker – This one is to your right.

Convert Androids – During the march you’ll begin to be able to convert androids from a distance and they will join your growing group on the road. Press any of the button prompts to do so. 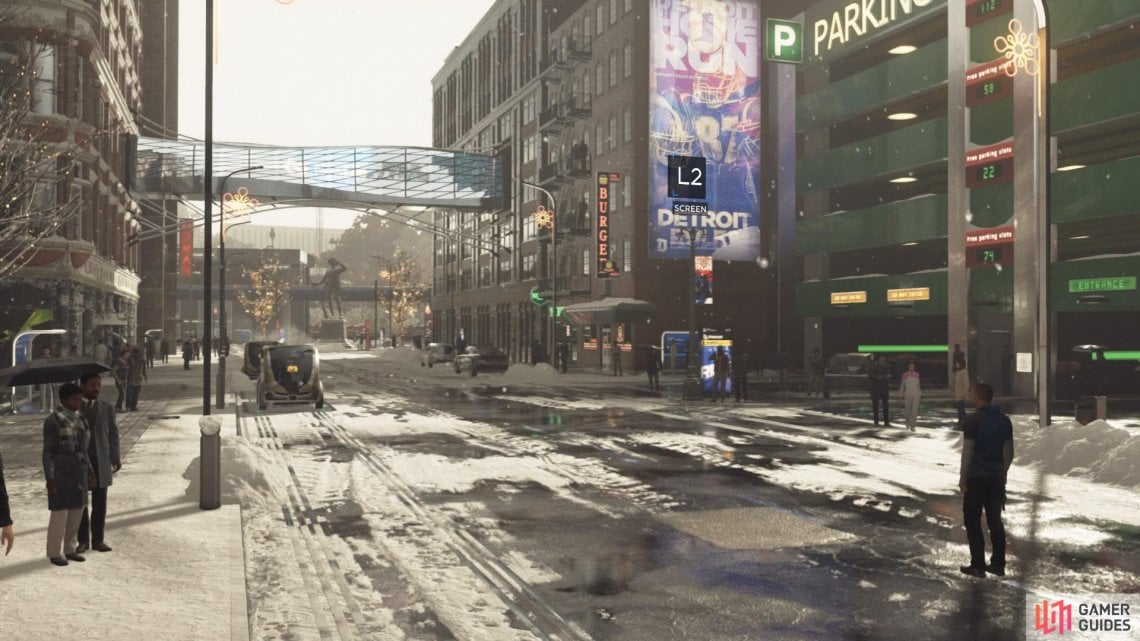 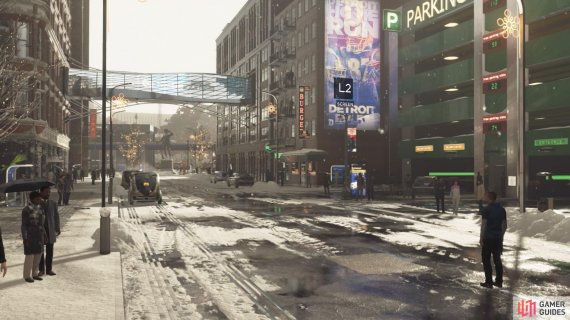 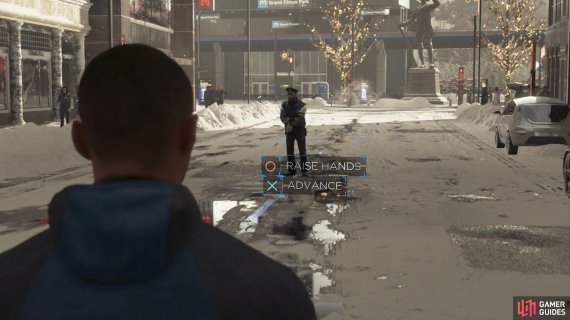 Hack Screens – While walking, look to your right for the billboards. Press L2 to look and choose a symbol you’d like to hack the screens with.

Policeman Blocks March – A policeman will automatically appear to stand in your way, giving you two options:

Chant – You’ll start to be given options to choose from to have the androids chant as they walk through the street. You can pick whichever you like.

This is where things begin to get tricky. You’ll have to go through a slew of options, many of which will require replaying the chapter (and the game) to activate them all on the flowchart. Automatically, the police block the march and force everyone to come to a halt. From here, there are three paths to choose from.

– Police Fire Unprovoked: This is the result of choosing STAND YOUR GROUND.

– Sacrifice Self: Choose STAND GROUND > STAND GROUND > SACRIFICE. This results in the Police Keep Firing, and gets you the Markus stood his ground and was killed ending. This works if you left Simon to die at the Stratford Tower, or if you currently have low reputation with him. You also must leave John behind during ‘Spare Parts’. However, while sacrificing Markus means his story is over, the silver lining (for whatever it’s worth) is that your reputation with Jericho increases, as does the public opinion. 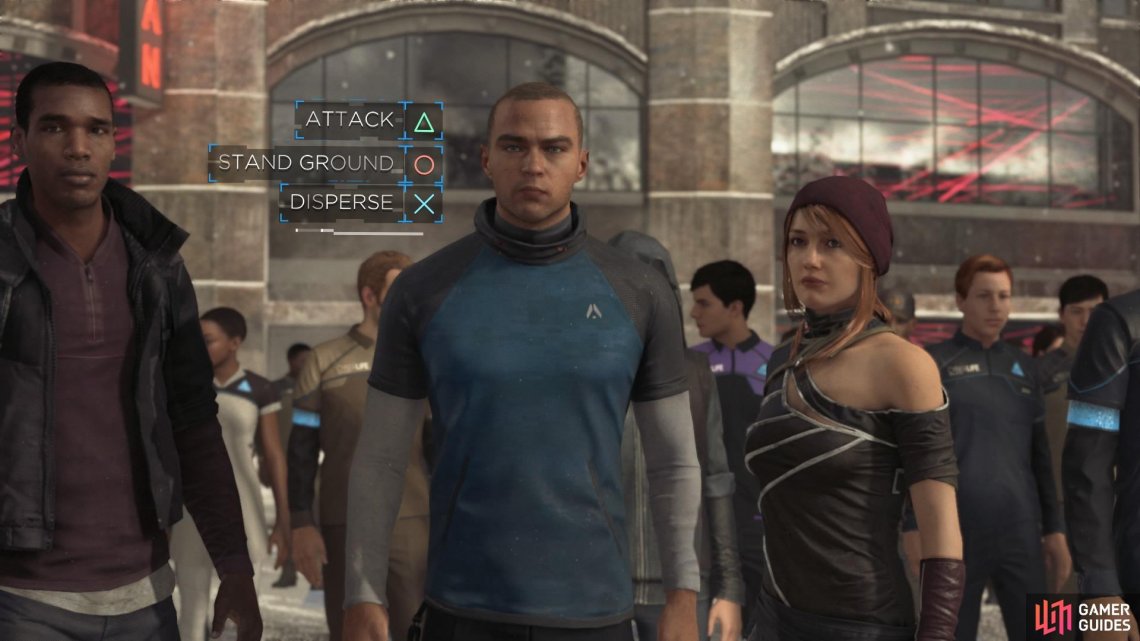 – Police Open Fire: This is the results of choosing DISPERSE (recommended).

– Run Away: As a result of choosing to run away, some androids will escape, and some will be killed by police. This will also end the chapter with Markus Fled, and your reputation with Jericho, North, and Josh will decrease.

– Lost the Fight: Choose ATTACK, but then don’t press anything. By doing nothing, Markus will lose the fight and proceed to hold a gun to his head. Choose DON’T SHOOT, and the police will kill him instead. This can only work if Simon is dead and John did not come with you during ‘Spare Parts’. This also ends the chapter.

– Simon Sacrifices Himself: If Simon is still alive and re-joined you, and your reputation with him is high, then Simon will save Markus instead. This will end the chapter.

– Shoot Self: Don’t press any buttons after choosing to ATTACK. Markus will lose the fight, point a gun at himself, and then you can choose SHOOT. This results in the chapter ending Markus Committed Suicide.

– Win the Fight: Choose ATTACK and win the fight against the police by pressing the button prompts successfully. The police will retreat and it’ll give you the Markus Defeats the Police ending. Your reputation with Jericho will increase, but the public opinion will decrease.

For the sake of the Survivors trophy, make sure you have Simon with you and that you didn’t let him die earlier in the game, and choose DISPERSE when blocked by the police. No major characters will die even though you lose some androids from the march, and while your reputation with others will decrease, you’ll have plenty of chance to raise it again later.