There are many choices to be made during this chapter that will all lead into one of three branches. It may take a few playthroughs to complete the flowchart, but here we’ll give you the breakdown of the choices and what they mean.

The first thing you need to do is Wait on Todd and Alice. This part is unmissable; all you have to do is serve them dinner at the table and then wait for the cutscene. Todd is growing increasingly violent, which scares Alice into running upstairs. Todd will order Kara to stay put, and now you’ll have control over what path to take. 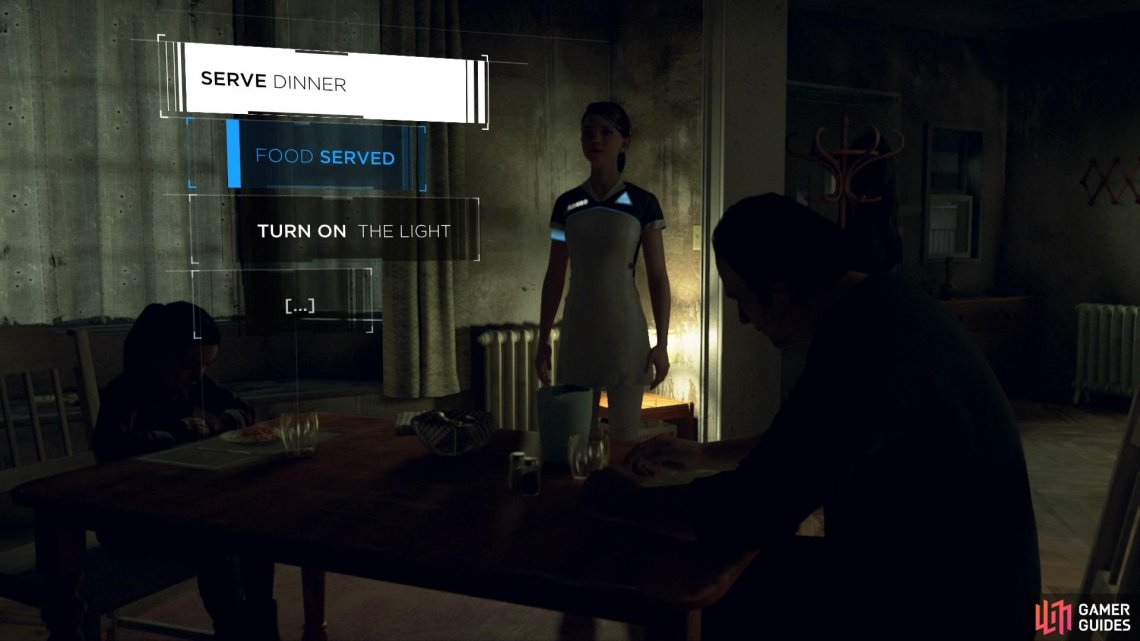 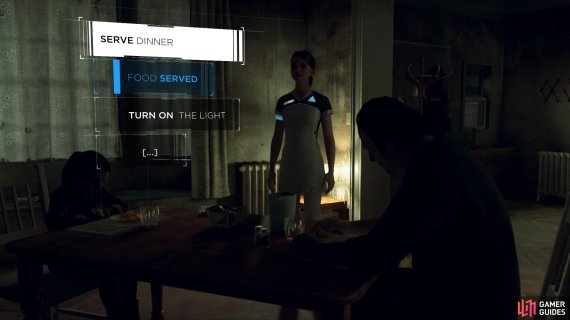 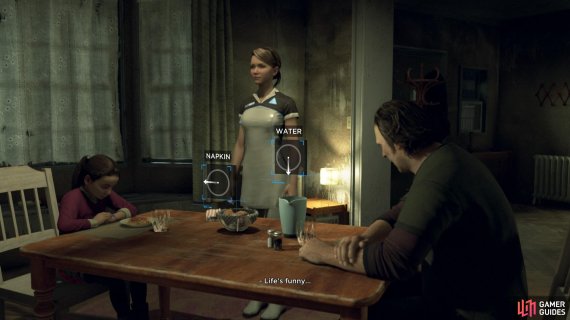 Serving dinner is unmissable at the start of this chapter (left), Follow the instructions (right)

Branch 1: Kara fails to become deviant – By obeying Todd and doing nothing, Todd will eventually go upstairs and kill Alice. He’ll then return to Kara and kill her, too. Since we’re aiming for the overall good ending of the game, this outcome is the least desirable.

Branch 2: Kara is too slow – You can choose to become deviant by holding L1 and mashing the X button, but then you can still choose not to go upstairs after Alice. Don’t protect her, don’t talk to Todd, and don’t stand in his way when he finally makes a move to go upstairs. Instead, just wait until the final cutscene.

Branch 3: Become deviant – This is where things begin to get more complex. By becoming deviant, you open many choices. Hold L1 and mash X until Kara breaks her programming – now you’ll have two options. 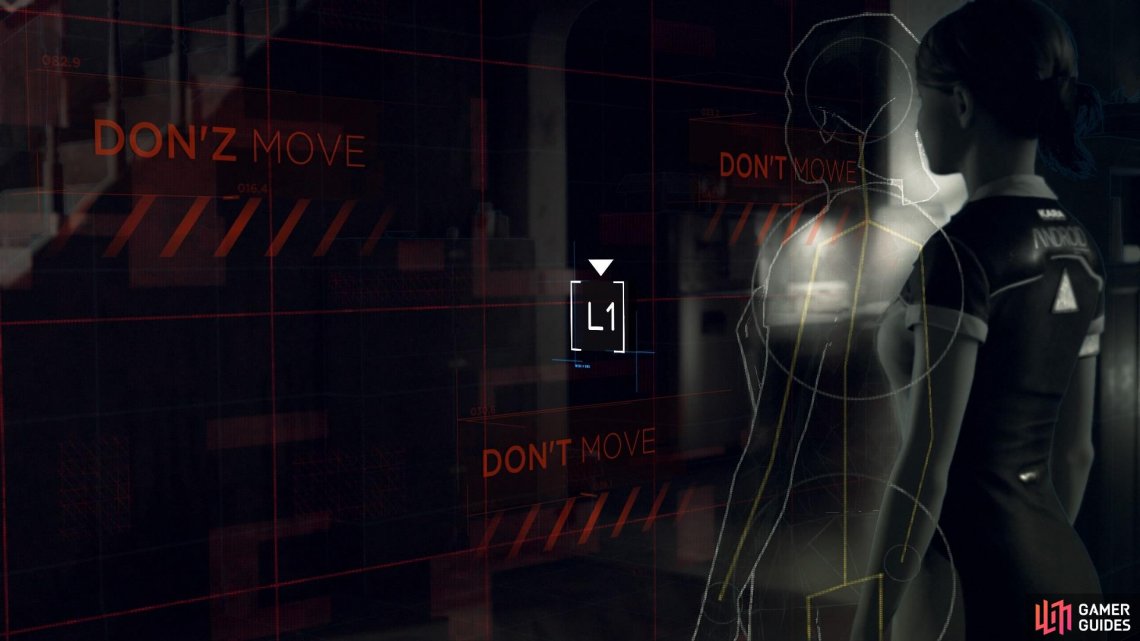 Option 1: Go Upstairs – Don’t talk to Todd. Instead, head straight upstairs to find and protect Alice and run through any of the following steps.

– Get to Alice before Todd: Head to Alice’s room to try to protect her.

– Reason with Todd: You can leave Alice’s room again to face Todd in the hallway, but Todd will shove her aside. Go back into the room and choose from the options to fight back.

– Run Away: doing this will take Alice out of her room, but Todd will come after you. If you stand still, you’ll Fail to Hide and Todd will take Alice back to her Room. From here, you can choose from the fighting options to defend Alice. Or, you can Hide in Corridor so that Todd realises Kara and Alice are gone. Just leave the room and hide somewhere until he walks by, then head for the stairs. This will take you to the front door or the back garden for you to escape through.

– Todd is coming/Out of Time/Todd breaks into the bedroom: Once you’re in Alice’s room, don’t pick anything from the choices given. This will lead right into fighting back and defending Alice.

– Lock Door: Locking the door will give you 10 seconds to decide what to do next. Todd breaks into room/Grab the lamp won’t do much except lead straight to defending Alice again. The same goes for Todd breaks into room/Talk to Alice. But if you found the ledge outside of the window during ‘A New Home’, you can use this to escape. Ignore Alice’s protests by picking her up and placing her outside the window and then follow behind her until you’re both on the ground. From here, you can catch the bus directly outside the house, ending the chapter.

Or, you can listen to Alice’s protests and Face Todd instead, which will lead to defending Alice again. Failing to escape via the window will cause Todd to stop you from climbing outside, and he’ll knock you from the roof. 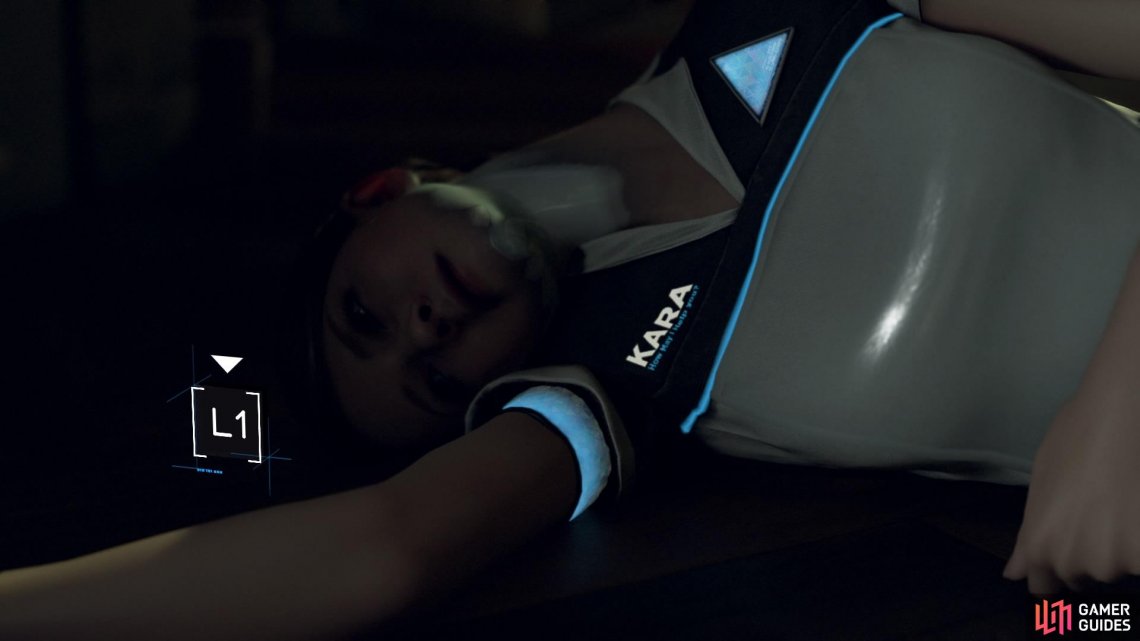 Option 2: Reason with Todd – If you decide to talk to Todd instead of going upstairs, he will always push you down to the floor and march upstairs himself, which means you can’t get there before he does. In addition to this, Kara can stand in Todd’s way. Just become deviant, but don’t go upstairs or speak to him – wait for him to reach the stairs with a belt in his hand and then attempt to get in his way.

– Todd goes upstairs: Todd will always find a way upstairs no matter how much you try to stop him.

– Get to Alice after Todd: This is unmissable on this branch because Todd will always get to her before you.

– Threaten with Gun: If you tidied the pills away in the nightstand during ‘A New Home’, you’ll have unlocked the option to use the gun that you saw in the drawer. You can choose to threaten Todd with it in order to defend Alice. 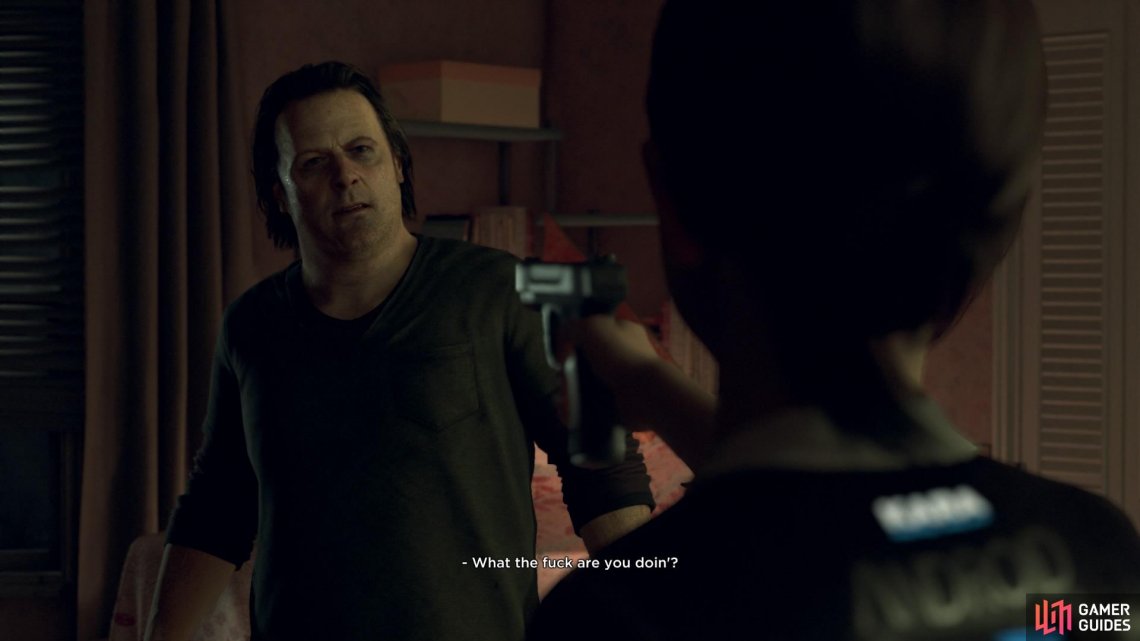 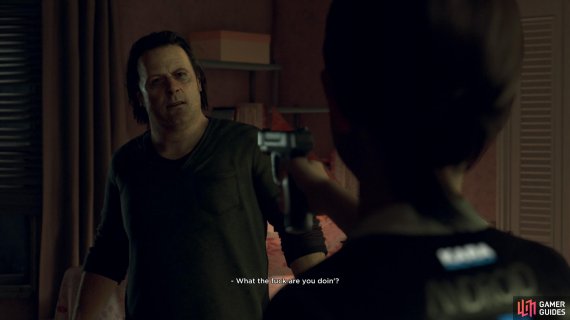 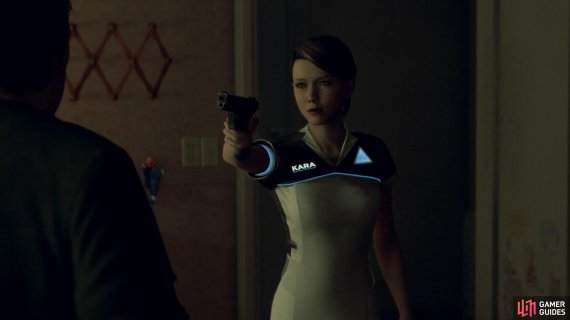 You can find the gun in Todd’s room if you unlocked it in an earlier chapter (left), Threaten him with the gun to be embroiled in a fight (right)

This can lead to Kara killing Todd if you chose to take the gun. Fight against Todd, drop the gun, then pick it up again so that Kara shoots him. Or, Alice kills Todd if you drop the gun and fail to pick it up. Afterwards, you can escape through the front door and catch the bus to get away (this is unmissable once you’ve shot Todd).

Another option is to Stun Todd – no matter how good you are at the melee fighting sequence, Kara will find a way to stun him long enough to escape.

– Stun Todd (Experienced Difficulty only): When Todd is stunned, don’t run towards the stairs and he’ll eventually catch you in the hallway and break Kara. Mash the button prompts to Try/Open the Front Door where you can then fight your way out and Catch/Miss the Bus. To catch it, just run towards it once you’re outside, and to miss it, let Todd catch up to you. 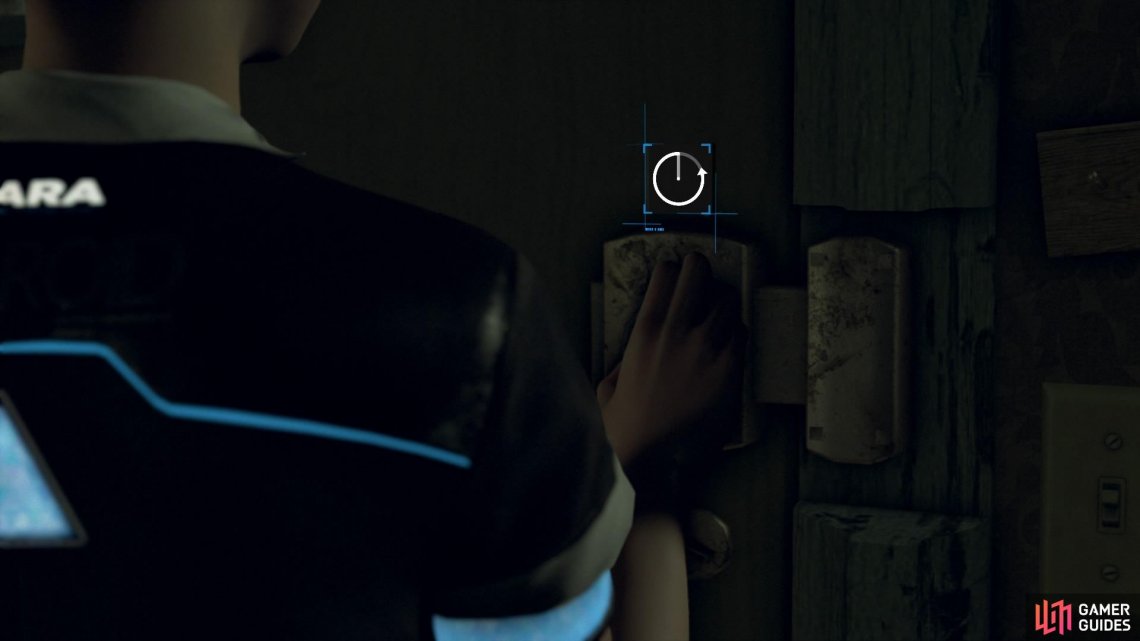 (1 of 2) Follow the prompts to unlock the front door 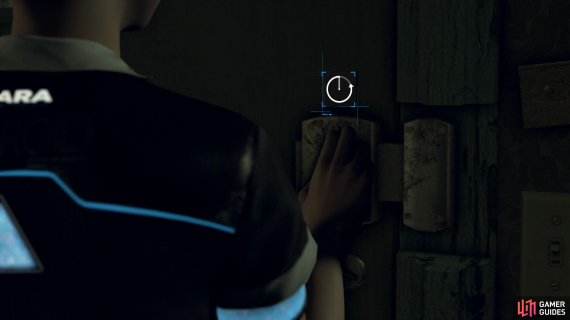 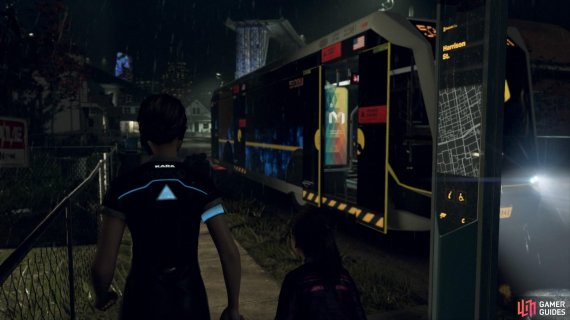 Follow the prompts to unlock the front door (left), Run to the bus with Alice if you were able to escape (right)

You can also fail to fight your way out by ignoring the prompts to escape via the front door, back garden, and catching the bus, and choosing not to fight back and letting Todd win.

All of these things count towards completing the flowchart, so make sure to replay enough times and explore all the different options until you reach 100%.