Before we begin, there are a bunch of other tasks to complete. The option to be pacifist or violent will come once you have freed all the androids from the CyberLife store. So let’s get started!

Magazine – As soon as you have control, DO NOT MOVE. Look to your immediate left for the magazine and pick it up. 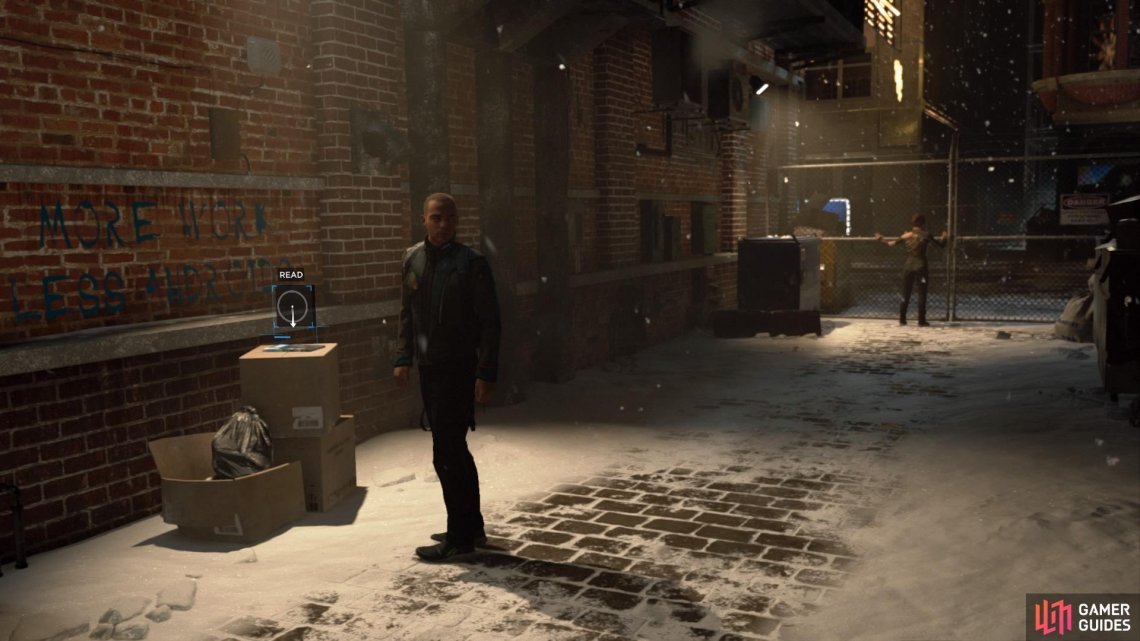 (1 of 2) Find the magazine immediately to your left 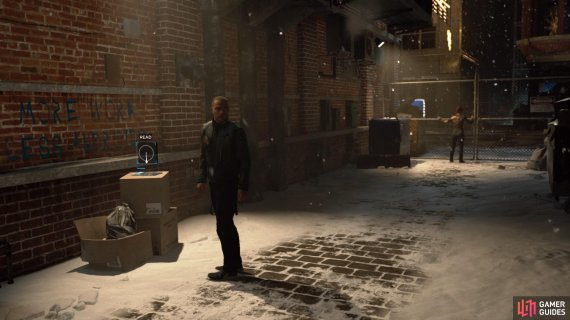 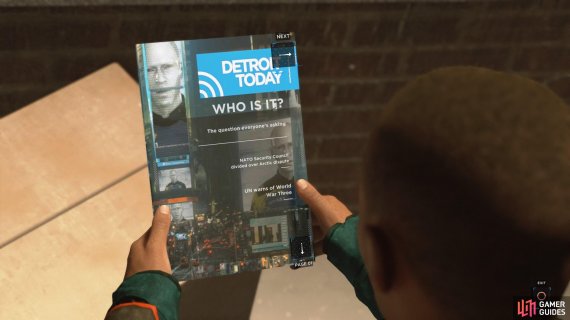 Find the magazine immediately to your left (left), Read both articles (right)

The next two nodes cannot be completed within the same playthrough. North Saves You can be accomplished by going into the street and not hiding or pressing any buttons when a police car rolls by – this decreases your reputation with North. Avoid Police Car requires hiding behind the container with North so that the police don’t spot you. 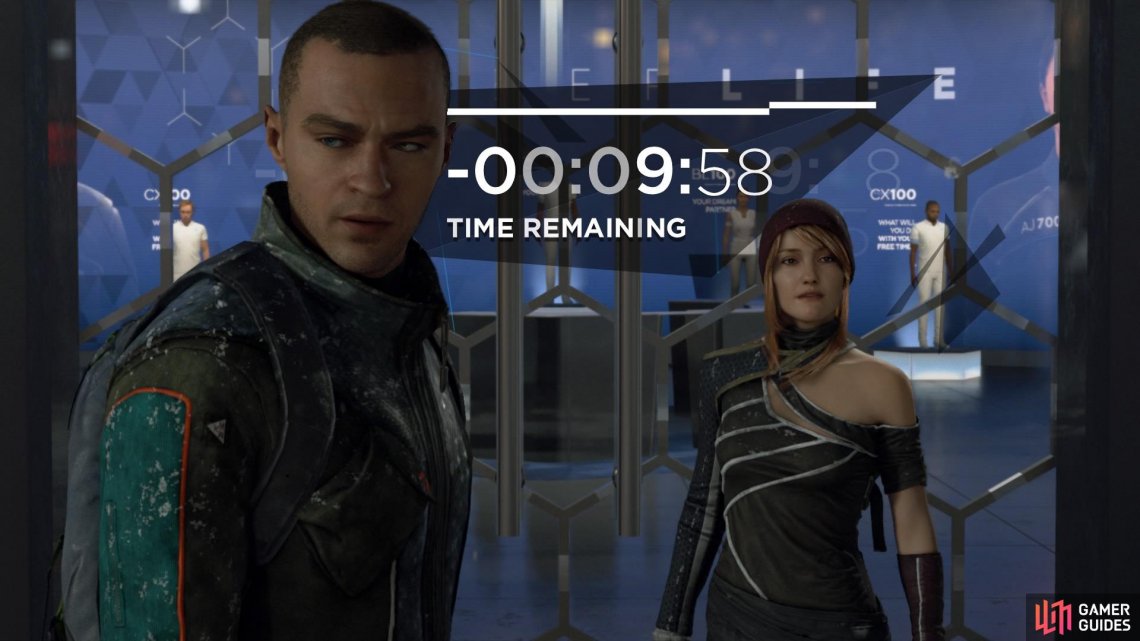 Secure the Place – Since you’re breaking into the CyberLife store, you need to disable any cameras or potential alarms so as not to get caught in the act.

Out of Time – As usual, you can just stand around and do nothing to have the mission automatically fail (Retreat). This should take around 10 minutes and will decrease your reputation with North and with Jericho.

Jump on Drone – A police drone is circling the area above you. Pre-construct a path when prompted to find a way to bring it down.

– Destroy Drone: Climb up the scaffold and jump on to the drone, followed by repeatedly pressing X to destroy it.

– Fall from Drone: Alternatively, for this node, climb the scaffolding to jump on the drone but don’t press anything, failing to destroy it. This decreases reputation with North and Jericho. If you don’t destroy it, North will finish the job which results in the police showing up. This is followed by three options, all of which must be acquired over three playthroughs. 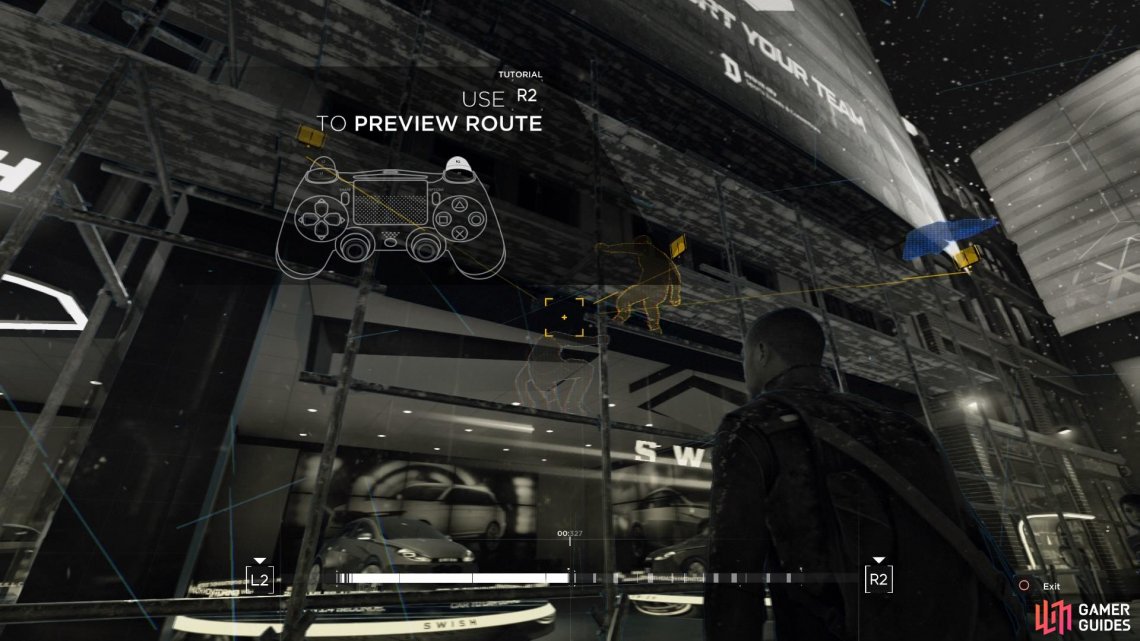 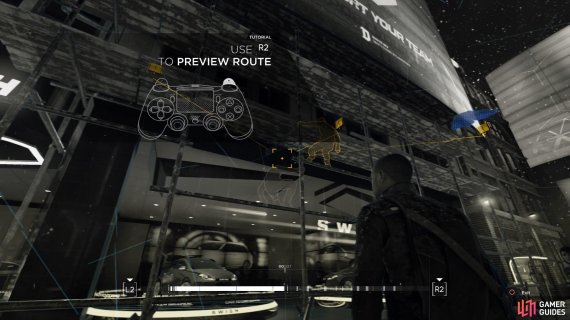 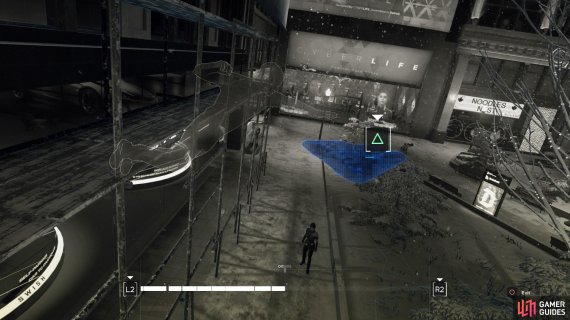 Use the scaffolding to your left to preconstruct a path to the drone (left), Take it out to avoid alerting the police (right)

Deactivate Alarm – Head towards the door of the CyberLife store and interact with it. You’ll have to scan the security camera inside using triangle, which will then show you a red line leading towards the alarm’s power source. Follow it along the ground and across the road where two androids will be down in a hole. You can climb down to convert them, and they will leave. 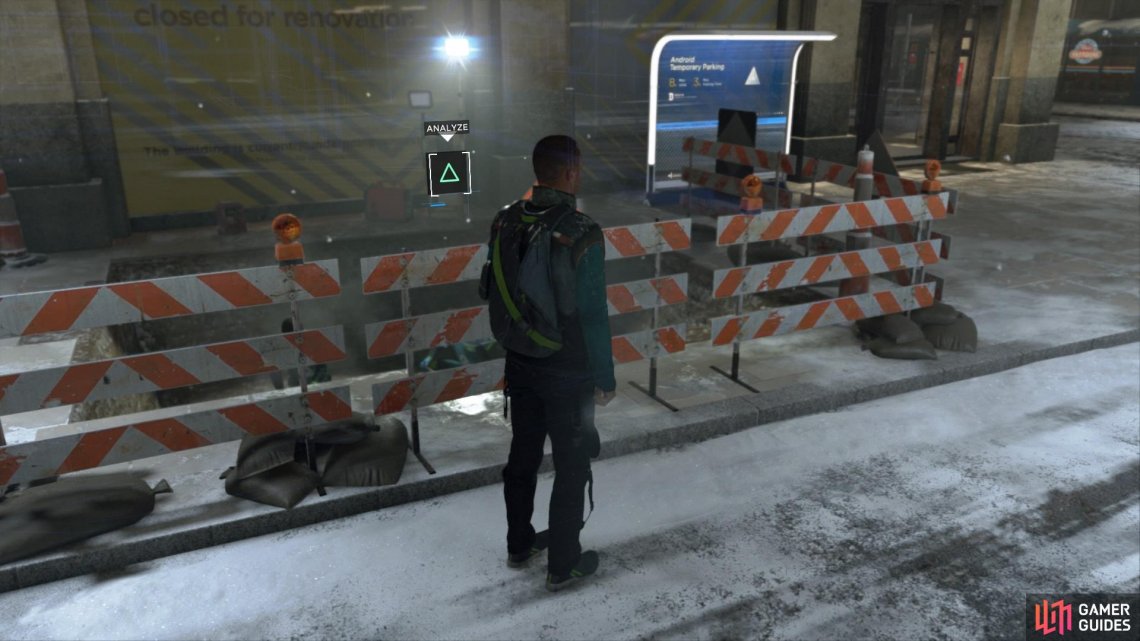 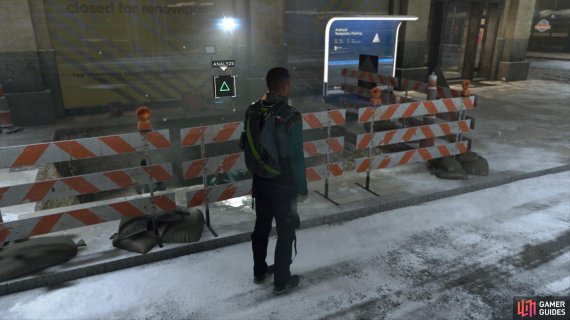 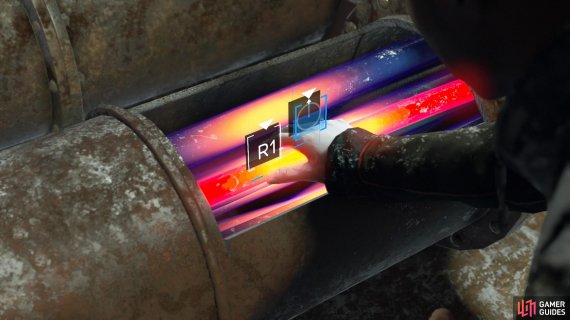 – Get Spotted by Drone: This only works if you haven’t destroyed the drone yet. Once you’ve hacked the network, the drone will fly overhead – don’t press anything within the timer to let it find you. This results in North destroying it instead, and the police will appear.
– Hide: Or, when the drone appears, choose HIDE.

Block Road – Go to the end of the road where two androids are shovelling snow by a yellow road sign. Convert them to make them leave and use the sign to block the road. 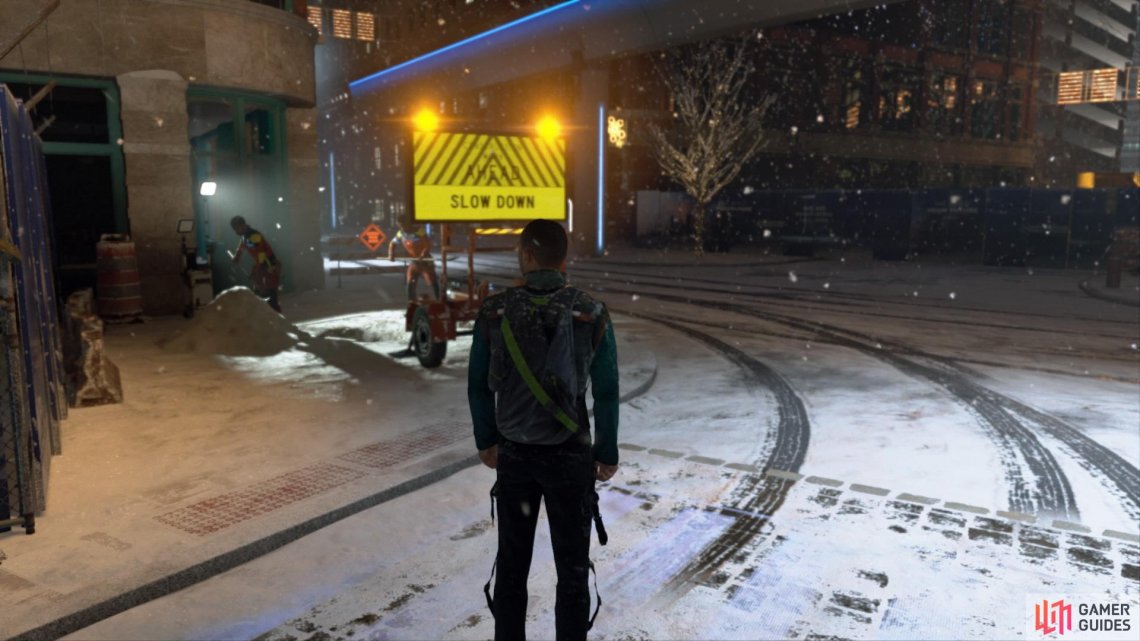 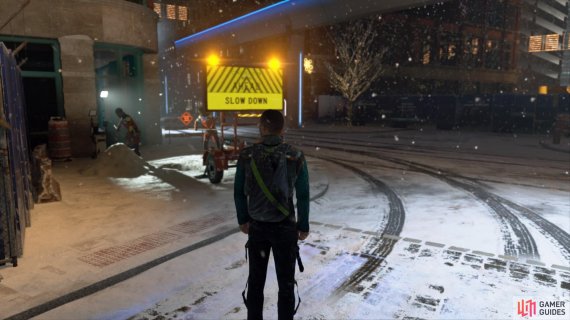 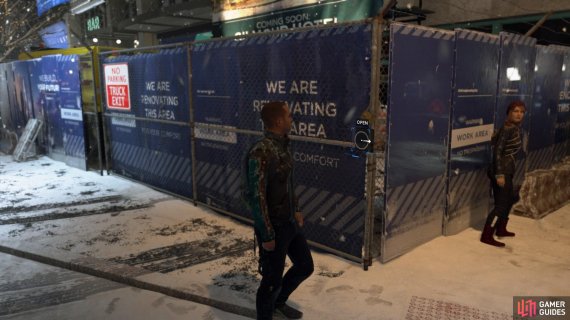 Convert the androids and use the sign to close off the road (left), Find the truck behind the blue fence (right)

Find Truck – Now head over to the far right of the area towards the blue fence. If you find the gap to look through, you’ll see the truck.

Ram Store – Jump over the fence to steal the truck, then use it to drive right through the front of the CyberLife store.

Police Not Alerted – If you turned off the alarm and got rid of the drone, then nothing bad will happen once you crash through the store.

– This activates the Inside the Store checkpoint.

Police Alerted – If you didn’t turn off the alarm or destroy the drone, then the police will show up once you’ve rammed the truck through the front door.

– This leads to Had to Flee and ends the chapter early. 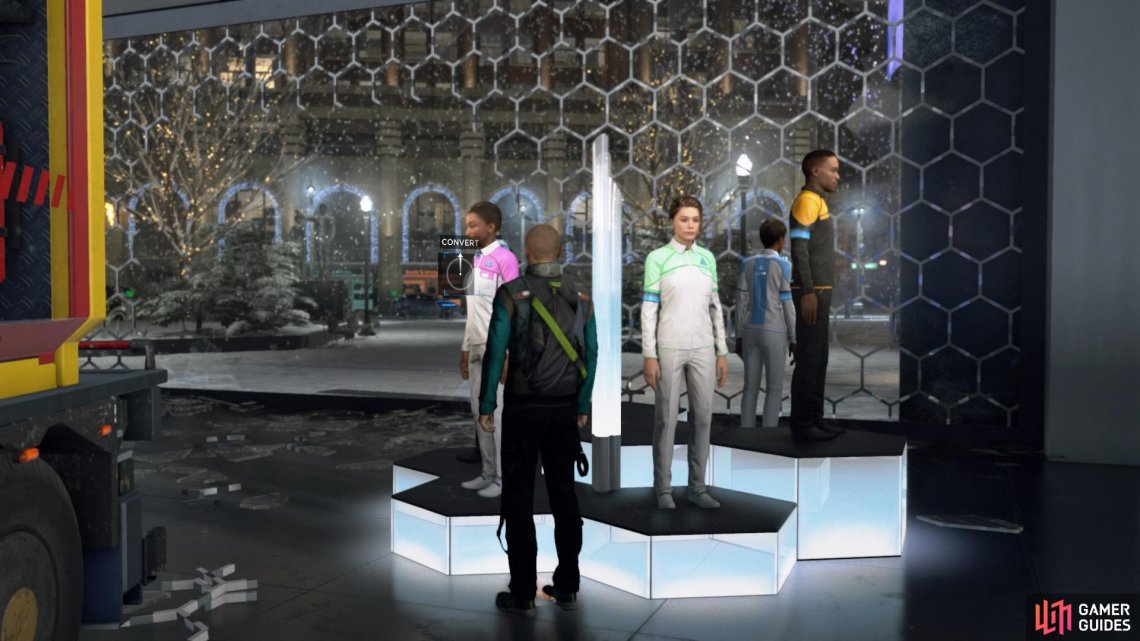 (1 of 2) Convert the androids in the store 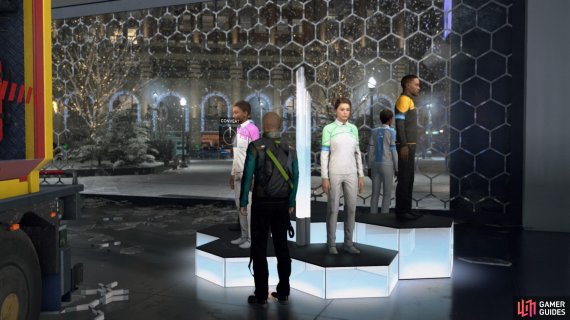 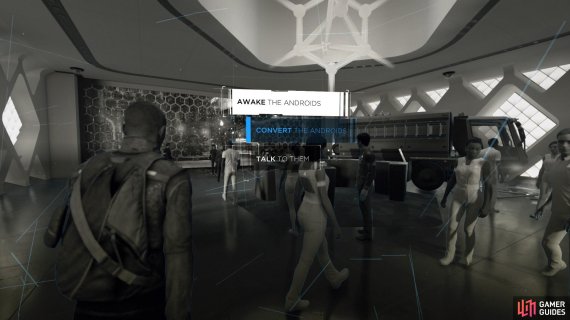 Convert the androids in the store (left), Talk to them to have Markus make a speech (right)

Once you’re Inside the Store, Convert the Androids and Make a Statement. This will be unmissable as Markus gives a speech to his new recruits, and it will increase your reputation with North and Jericho. Remember: this only happens if you disabled the alarm and the drone.

Note: While converting the androids, head to the back of the store to find North staring at another android of herself. Markus will ask her if she is okay, and this will unlock a dialogue option later in the game.

In this section of the chapter, you can choose to be VIOLENT or PACIFIST. As stated above, we’re going to outline the pacifist route first. You can scan the area using R2 to find all the markers and complete the tasks. We recommend the pacifist route for that good ending, so when prompted, pick the following options. 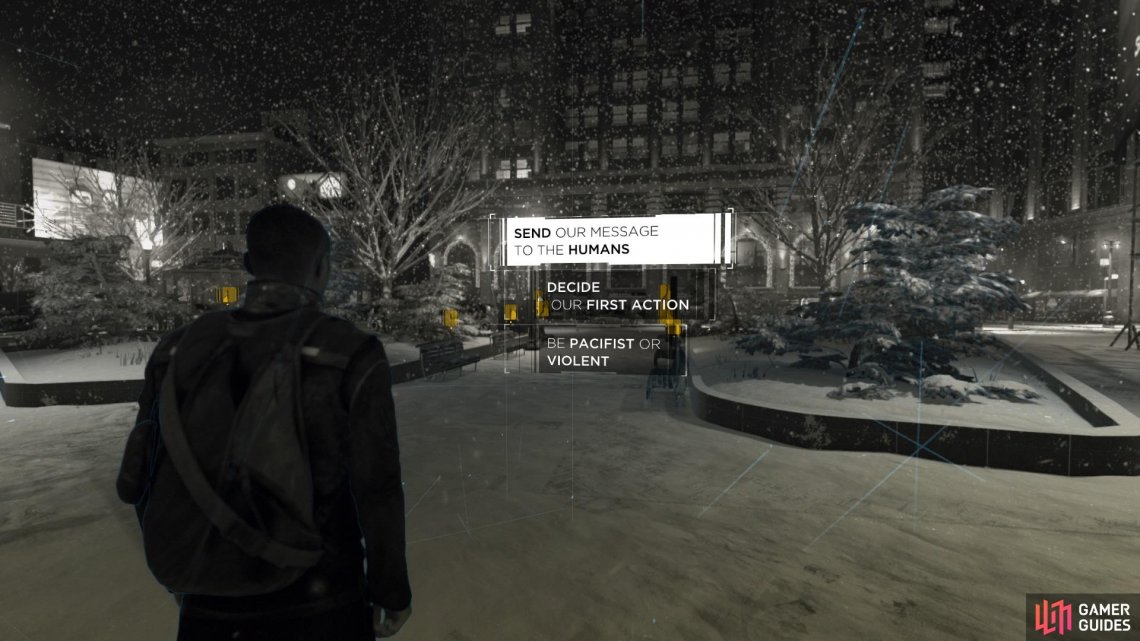 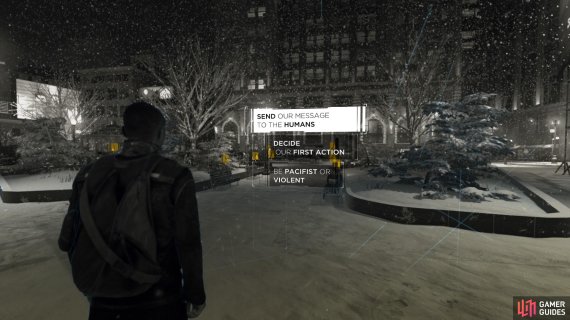 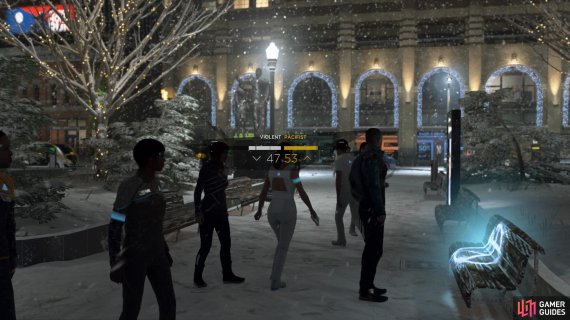 The yellow markers indicate everything you can interact with (left), What you choose will effect the violent/pacifist meter (right)

– Tag Statue (in the middle of the park by the benches)
– Hack Bus Stop (in front of the CyberLife store)
– Tag Benches (in front of the CyberLife store; choose whichever symbol you like)
– Hack Billboards (there are some digital billboards depicting three android faces)
– Hack Android Parking (similar to a bus stop on the right of the store where androids are usually left by their owners)
– Hack Street Lights (at the end of the road)
– Deploy Banner: Climb the building with the androids behind the windows, and Markus will set down a banner marked with the symbol you chose earlier while tagging.
– Free Androids: Smash the windows of the store on the other side of the road to free them.
– Overload Electric System: Interact with any of the recharge stations by the cars to overload the entire system.
– Push/Tag Car: Push a car into the middle of the road and then proceed to tag it.
– Tag Windows (only specific ones can be interacted with at the CyberLife store)
– Refuse Molotov/Plant Flag: If you don’t do anything else first, and stand in a certain place, North will offer you a Molotov. Choose REFUSE to plant a flag instead. 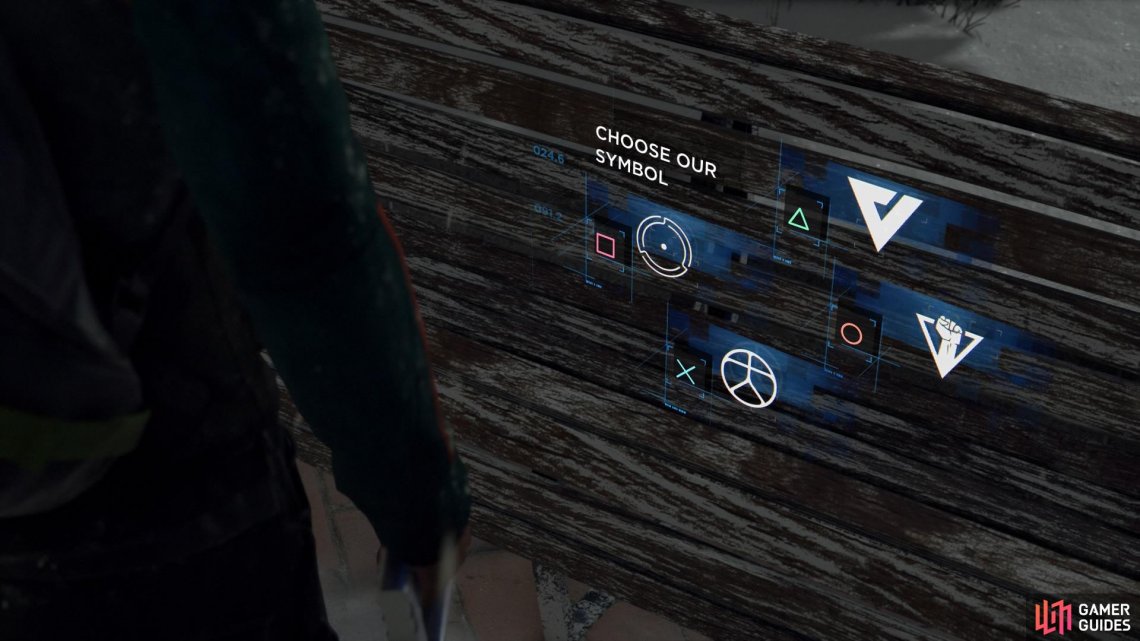 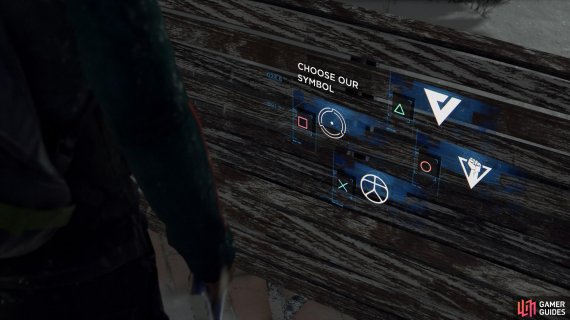 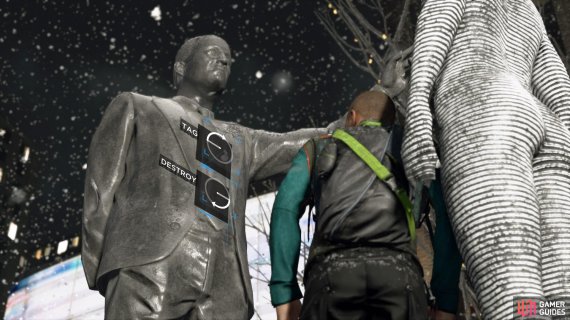 You can tag objects with a symbol of your choice (left), Tag the statue to remain pacifist (right)

Throughout this process, you’ll have a percentage meter that can go up or down depending on your choices. By choosing to be pacifist, the yellow meter should increase substantially high. You don’t have to raise it all the way to 100%, just as long as the good choices outweigh the violent ones.

Send a Strong Message – You should achieve this simply by tagging everything.

– Pacifist Message - Achieved by having more pacifist points.
– Markus Led a Peaceful Protest – This will end the chapter.

Regardless of what you do, a police car will arrive. At this point, choose SPARE, and then the team will return to Jericho.

Once you’re Inside the Store, Convert the Androids and Make a Statement. This will be unmissable as Markus gives a speech to his new recruits, and it will increase your reputation with North and Jericho. Remember: this only happens if you disabled the alarm and the drone.

Now we’re going to outline the violent route, which we do not recommend for the purpose of the good ending. Just do everything opposite to the pacifist approach.

Throughout this process, you’ll have a percentage meter that goes up or down depending on your choices. By choosing to be violent, the meter should increase (red arrow) substantially high. You don’t have to reach 100% as long as the violent meter outweighs the pacifist one.

Send a Strong Message – You should achieve this simply by destroying everything.

– Aggressive Message - Achieved by having more violent points.
– Markus Led a Violent Riot - This will end the chapter.

Regardless of what you do, a police car will show up. At this point, choose REVENGE to kill the officers, and the team will return to Jericho. 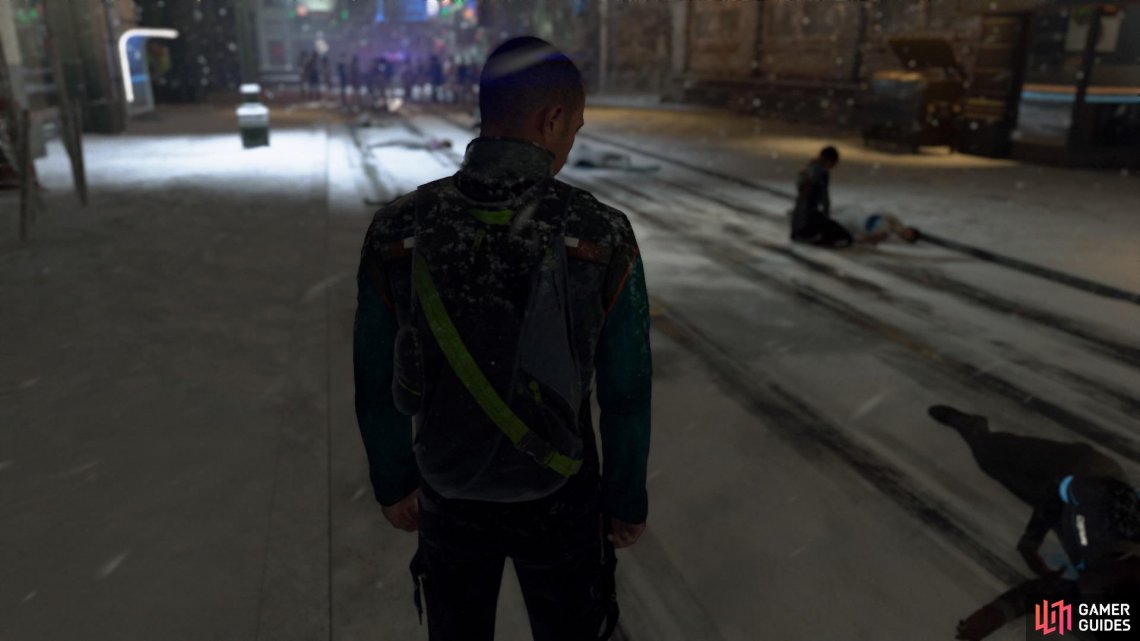 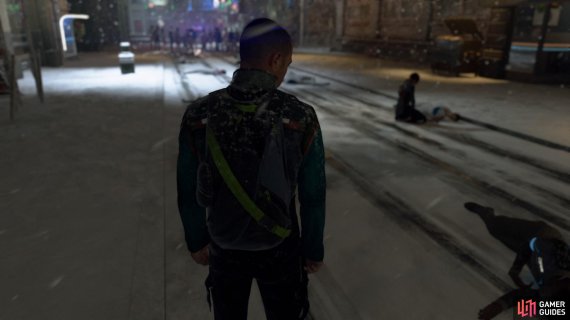 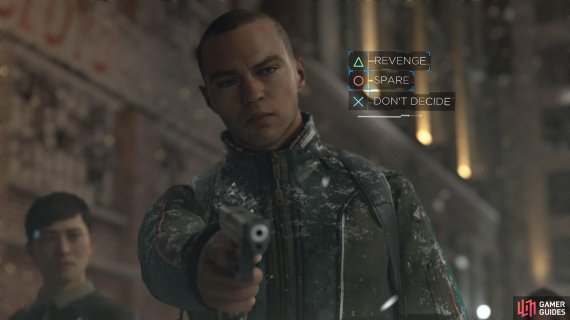 The androids will be gunned down by the police (left), Choose how to react (right)

Alternatively, you can choose to Fail to Send a Message – after freeing the androids from the store, just stand still and do nothing for a few minutes. Don’t destroy or tag anything (keeping the meter at 50/50) and the whole group will run away.

This will lead to Markus Failed to Deliver His Message, ending the chapter.