This chapter sees our three main characters finally come together, which means you’ll be switching between their stories here rather than playing them separately as you have been doing so far. Crossroads is a long level that heavily depends on choices made previously and effects the paths and dialogue options available to you.

In this section of the guide, we’ll be taking you through Kara’s story first, from the beginning of the chapter to the end. You can find Connor and Markus’ parts in the following chapters.

Here are a few things you should know about Kara’s story before you begin:

– Some choices are unavailable if Luther died during ‘Midnight Train’.
– Some choices are unavailable if Luther survived during ‘Midnight Train’.
– If Markus died during ‘Freedom March’, he will be replaced by North as the new leader of Jericho.
– If Connor didn’t find the location of Jericho during ‘Last Chance, Connor’, then the entire last section of this chapter will be unavailable. Therefore, Kara’s next scene will occur at the start of ‘Battle for Detroit – Kara Leaving Detroit’ instead. Alternatively, the other path, ‘Battle for Detroit – Kara Captured’ will be unavailable, but she can still get captured at the start and taken to the recycling centre.

With all that in mind, it’s time to begin as we follow Kara and Alice driving to Jericho’s location. If Luther survived during ‘Midnight Train’ (and he should have) then he will be with you. 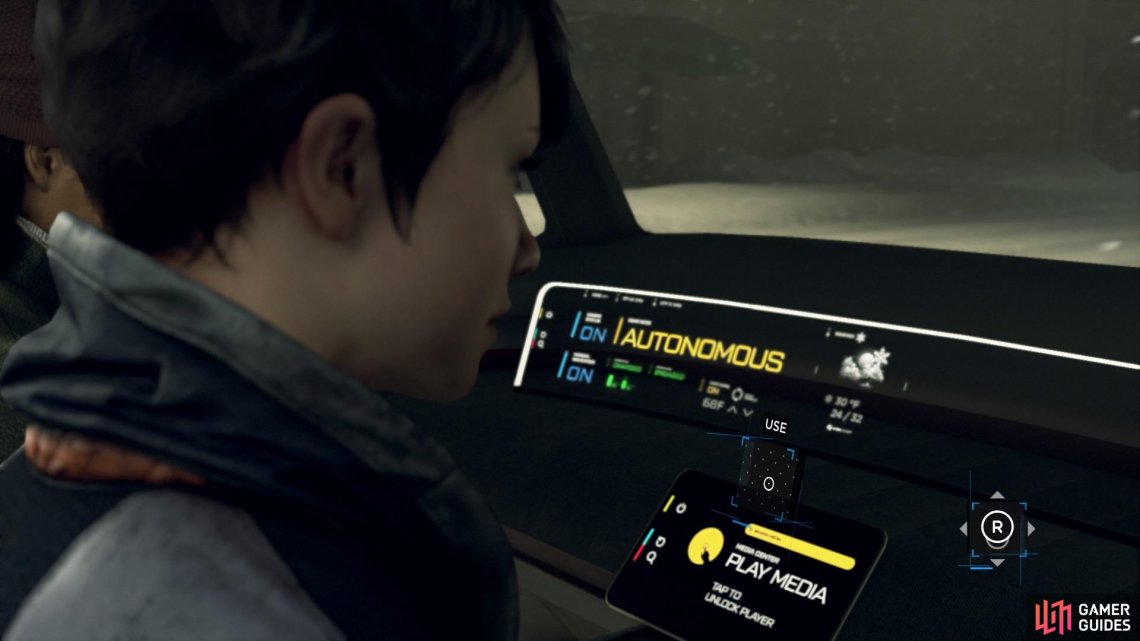 (1 of 2) Interact with the dashboard 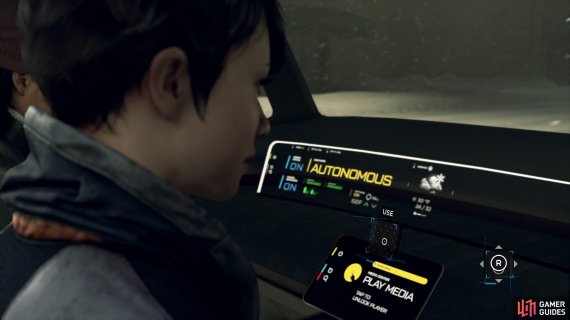 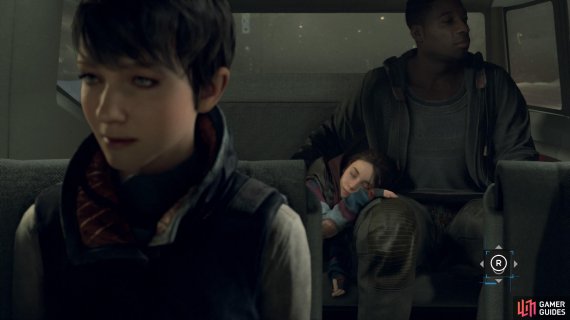 Interact with the dashboard (left), Luther should be with you (right)

Look Outside – Use L1 to watch the scenery go by outside the window.

Change Radio Station – Interact with the radio on the dashboard.

Parking Lot – After a while, you’ll arrive at your destination.

Time to Say Goodbye – Talk to Rose in the parking lot, then begin walking down the street.

Arrive at Jericho/Board the Ship – Unmissable 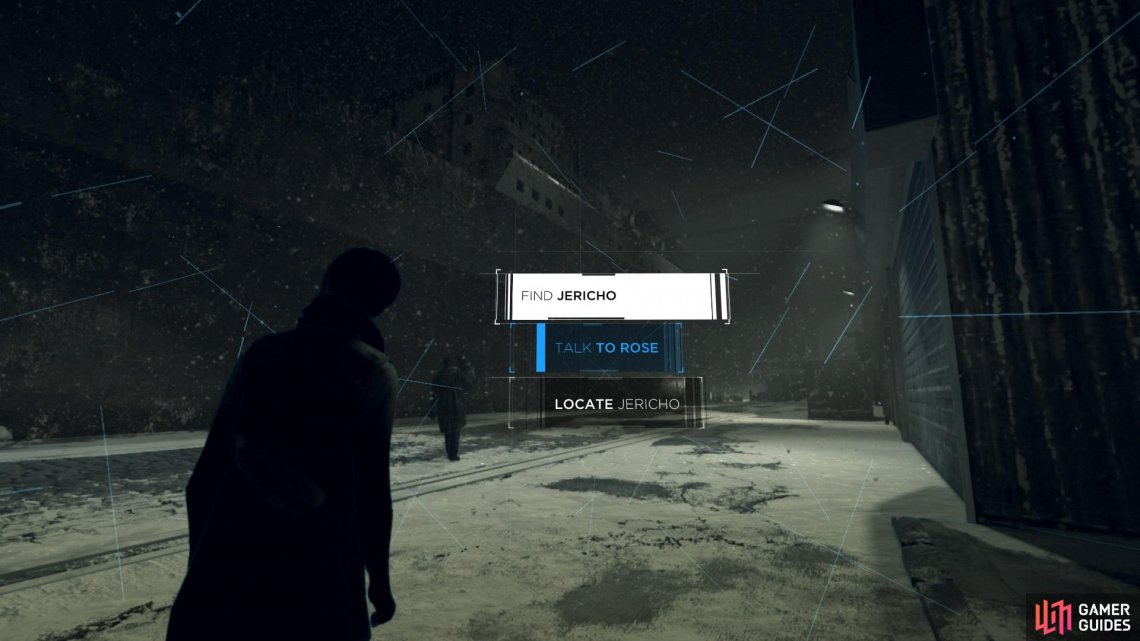 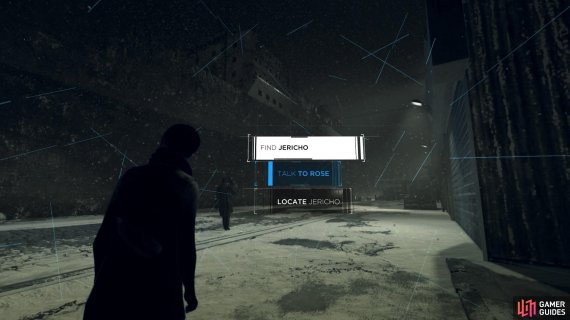 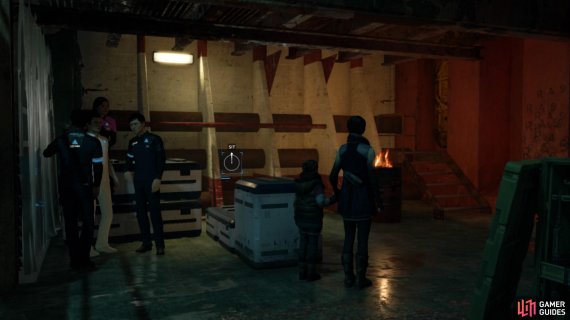 Make your way to Jericho (left), Sit down with Alice (right)

Find a warm place for Alice – On the opposite side of where you enter the ship will be a fire-lit barrel. Set Alice down here.

Now you have to search for Markus, which means heading upstairs. But before you do this, find the Magazine sitting on a box at the back of the room (assuming you’ve just entered). You can use R2 to help scan for it – pick it up before heading upstairs to avoid running into a cutscene, otherwise you won’t be able to go back for it.

Note: The magazine in this chapter is only available if Markus charged at the police (choose ATTACK) during chapter, ‘Freedom March’. 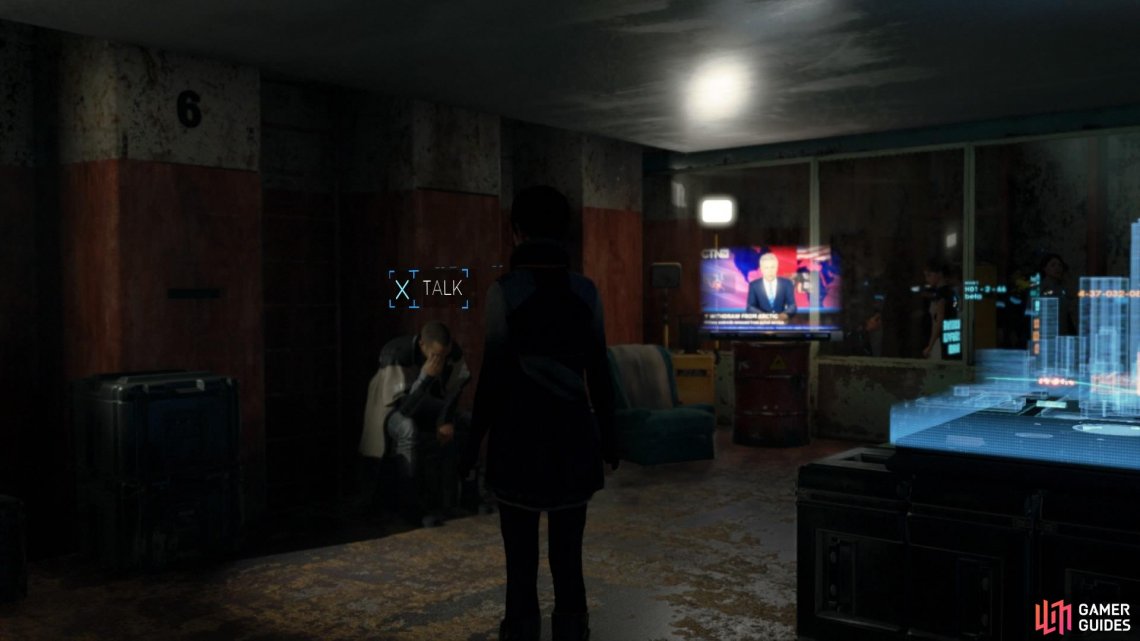 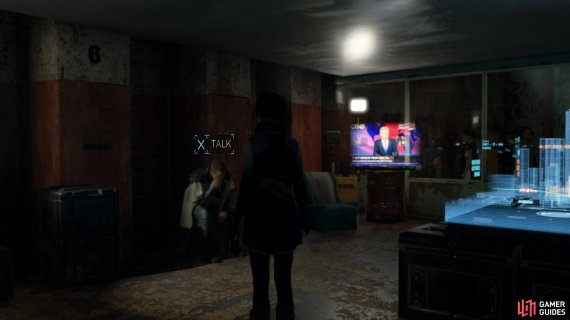 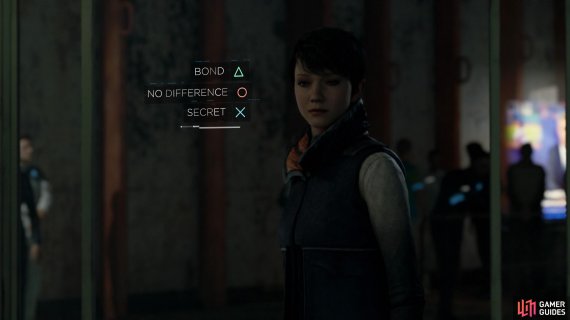 Find Markus on the upper floor in the back room (left), Talk to him (right)

Meet Markus or North – As you search the upstairs for the leader of Jericho, you will typically come across Markus. However, if Markus died during ‘Freedom March’, you’ll meet North instead. Once you’ve spoken to him/her, return to Alice downstairs.

Go back to Alice/See Android Child/Join Alice – This is unmissable. As Kara makes her way back to where she left Alice and Luther, she’ll stumble across an android child who she thinks is Alice. This is where she learns a shockingly hard truth. 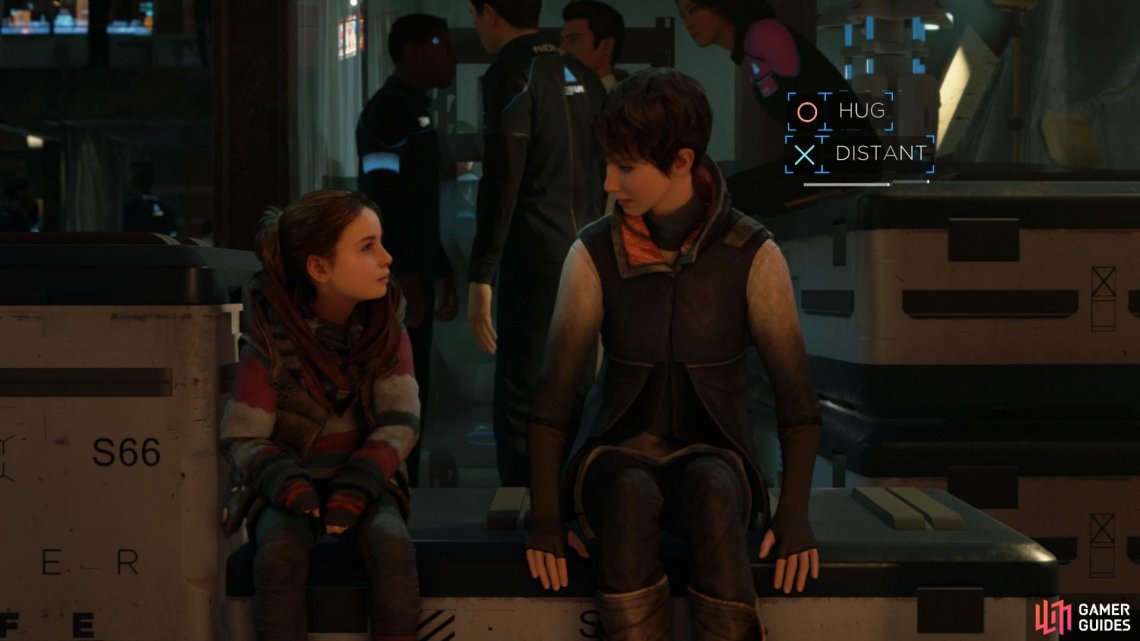 During this chapter, this would be the end of Kara’s first section. However, this chapter caters to the entirety of Kara’s story during ‘Crossroads’, so switch between each character’s ‘Crossroads’ chapter for the full linear guide.

The following are the endings and branches you can develop upon completion of this section:

– Kara, Alice, and Luther Left Jericho: If Luther is still alive and Connor did not uncover Jericho’s location.
– Kara and Alice Left Jericho: If Luther died during ‘Midnight Train’ and Connor did not uncover Jericho’s location.
– Kara Left Jericho Alone: You will get this ending if your reputation with Alice is low, as well as choosing to be DISTANT. When Jericho comes under attack, you can either choose to find her, or leave her by running away. Choose RUN AWAY.
– Kara and Alice in the Corridor: If Connor found Jericho, then this will be a checkpoint and possible path forward in the next section. 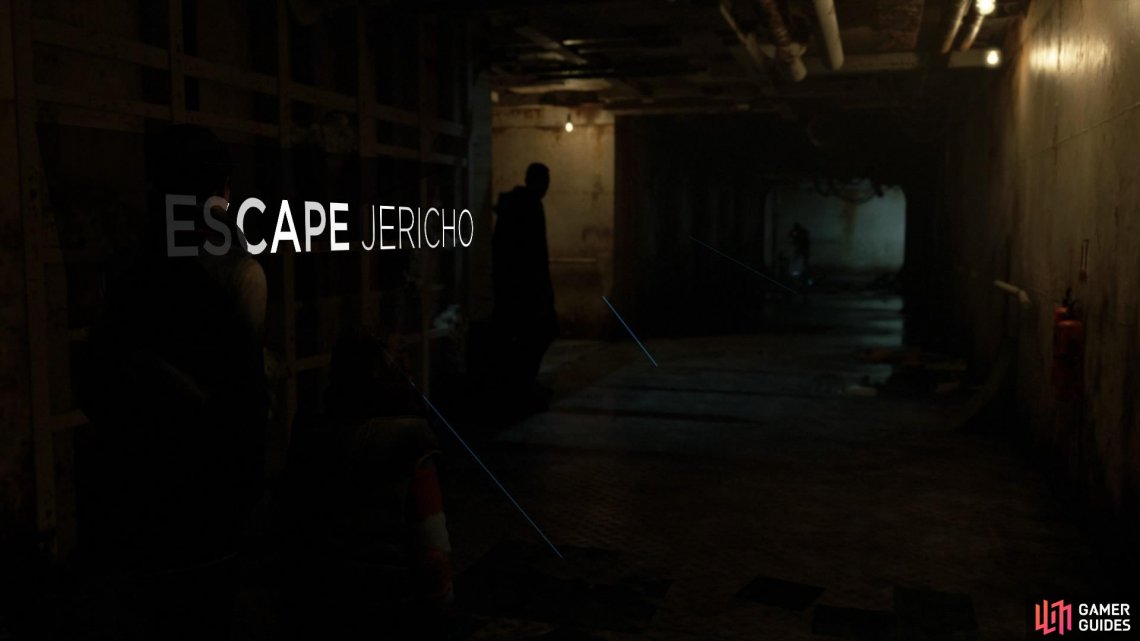 KARA AND ALICE IN THE CORRIDOR

Escape with Luther – If he is still alive at this point.

– Out of Time/Kara, Alice & Luther Captured: If you don’t move, you can allow yourself to get captured by the soldiers. This ends their part.

– Wrong Way/Kara, Alice & Luther Captured: Just run straight towards the soldiers to get arrested. This ends their part.

– Luther opens the Door/Go through Door/Luther gets shot: Proceed down the corridor (it’s the only way you can go) and Luther will get shot. This is unavoidable – he will always get shot here.

Search for Exit - If Luther died in a previous chapter.

– Out of Time/Kara & Alice Captured: If you don’t move, you can allow yourself to get captured by the soldiers. This ends their part.

– Wrong Way/Kara & Alice Captured: Just run straight towards the soldiers to get arrested. This ends their part.

– Android Opens Door and Gets Shot/Go through Door: Proceed down the corridor – it’s the only way you can go.

KARA AND ALICE AT CROSSROAD

Out of Time/Kara and Alice Captured: After a cutscene with either Connor, Markus, or North, and regaining control of Kara again, stand still and allow yourself to get arrested. This ends this part.

Wrong Way/Kara and Alice Captured: After a cutscene with either Connor, Markus, or North, and regaining control of Kara again, run towards the soldiers to get arrested. 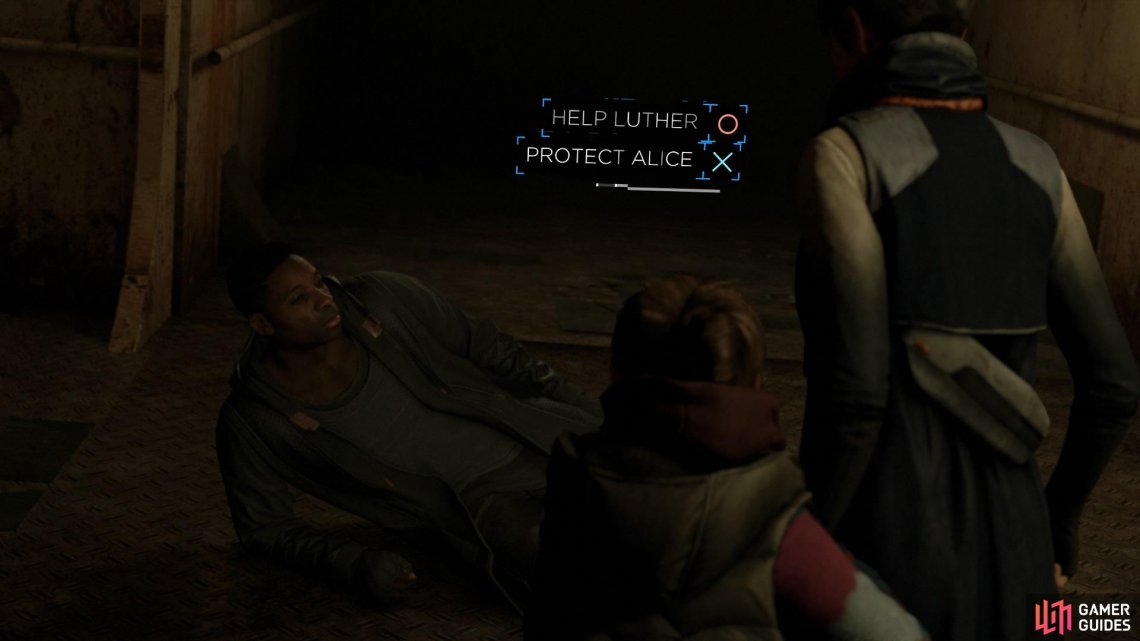 Run to Luther - If he is still alive, he will always get hurt at this point. So now you have to choose what to do with him.

– Leave Luther: Choose not to go back and help him.

– Help Luther: Choose to go back and save him.

– Get Luther to Safety/Leave Luther Hidden: Hide Luther in a nearby room away from the soldiers in the corridor.

– Fail to get Luther to Safety/Caught by Soldier/Kara, Alice and Luther Captured: When you choose to help Luther, just stand still until you get caught. This ends their part.

Run Toward Exit/Soldiers Block the Way/Hide/Android Seeks Shelter: These steps are unmissable. Kara and Alice will hide in a chamber and a scared android will start banging on the door, pleading for help. 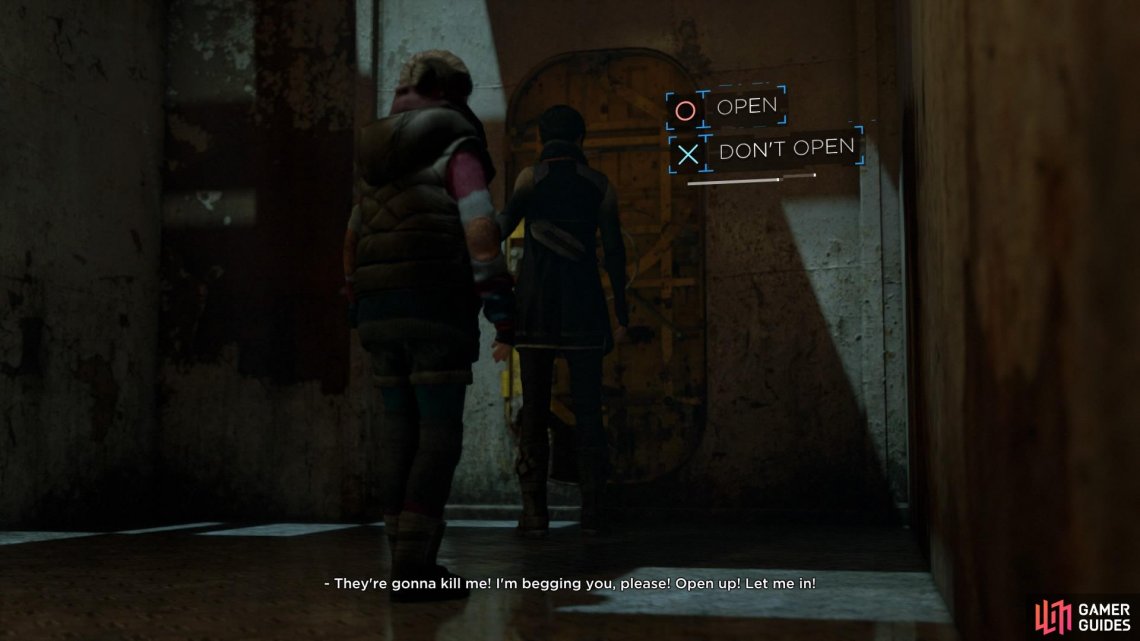 – Open the Door/Android Gets Shot: If you choose to open the door for the android, they’ll come tumbling in and get shot. You will also get attacked.

– Fight Back/Escape Cabin/Kara Flees: When you are attacked in the chamber, successfully complete the button prompts to win the fight and get away.

– Kara and Alice Captured: When you are attacked in the chamber, fail the button prompts and lose the fight to get captured. This ends their part.

– Keep the Door Closed/Soldiers Kill Android and Leave/Escape Chamber/Kara Flees: Choose to keep the door closed despite the android begging, and Alice telling you to open the door, and the soldiers will kill the android and move on without checking the chamber.

Once you successfully make it to the exit, there will be a lot of different options that lead to the same endings.

Almost Escape - Repeatedly mash X to escape the soldier’s gunfire. They’ll shoot no matter what, seeing as you won’t be the only one trying to escape this way.

Fail to Run - When the soldiers begin to shoot, just don’t press anything and Kara will get shot.

If you mashed X and did not get shot, then you will receive these options: 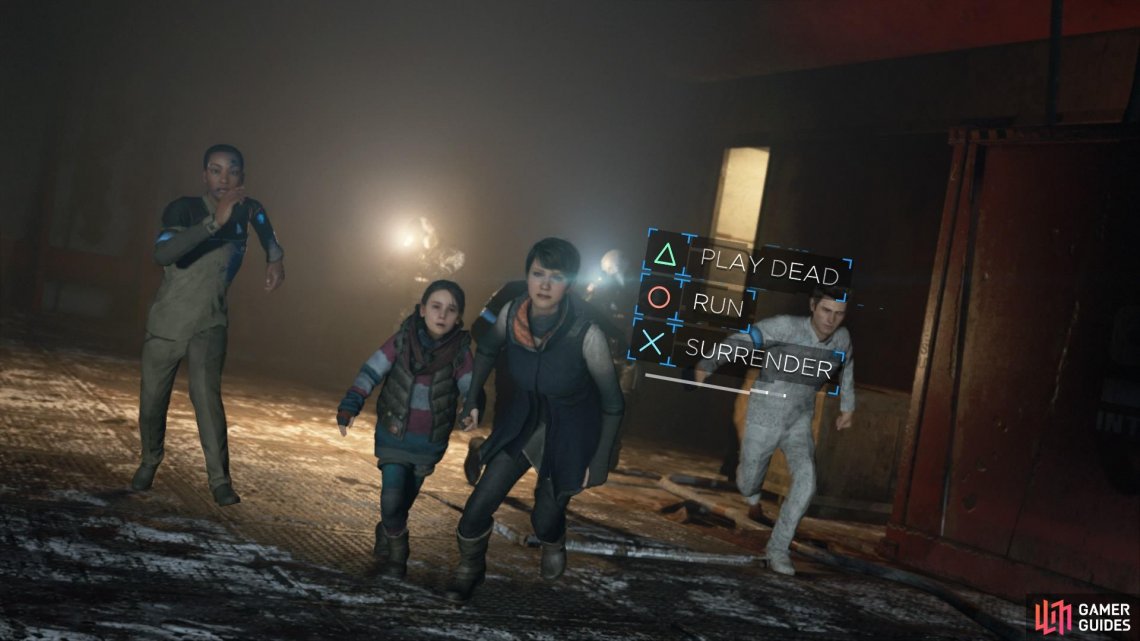 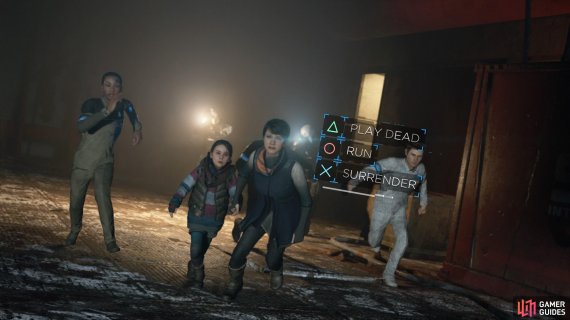 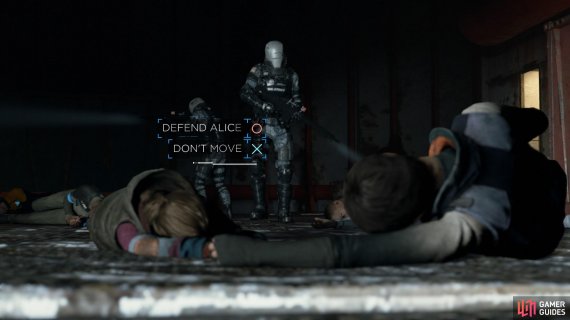 Choose to PLAY DEAD (left), DON’T MOVE and the soldiers will leave (right)

PLAY DEAD - Kara and Alice will throw themselves on the floor to look like the other dead androids.

– DON’T MOVE: Remaining Still enables you to leave Jericho successfully - and alive!
– DEFEND ALICE: Trying to play the hero here will get Kara and Alice killed. This results in the ending Kara and Alice Died in the Assault.

RUN: This choice always leads to Kara getting shot in the leg.

SURRENDER - Alternatively, this option always leads to the ending Kara and Alice Captured.

And that is the end of Kara’s part for this chapter! Keep reading for Connor and Markus’ parts, too.