This might be a tricky chapter to gain a flowchart with 100%, so it will definitely require a bunch of playthroughs.

Note: This chapter will only become available if you found the deviant in the attic at the end of ‘Partners’.

Before you begin the interrogation, interact with the case file on the table next to the deviant to Review the Photos. This will unlock a dialogue option later. Once you’ve done this, you can sit down and start to question him. 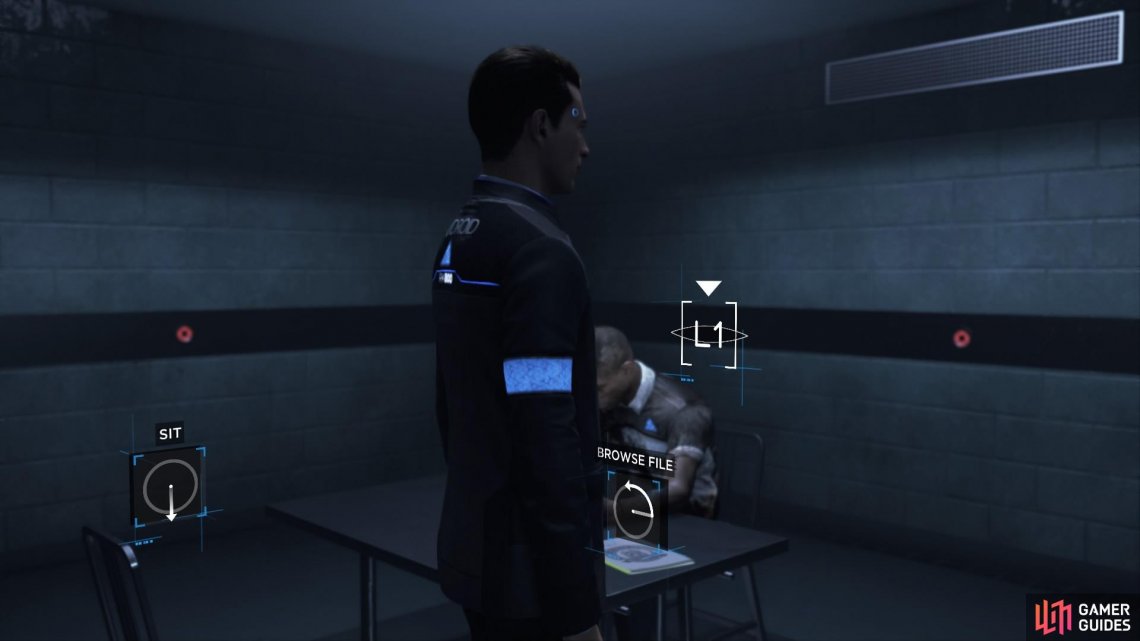 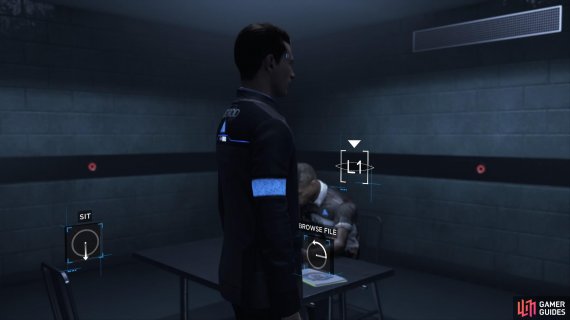 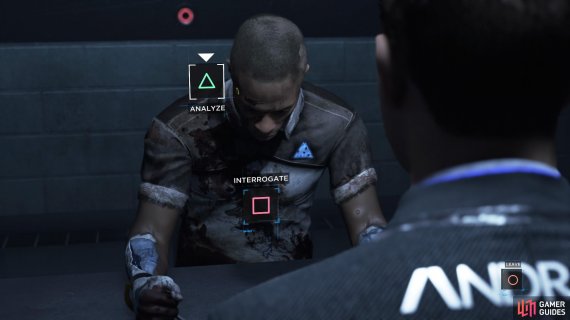 Check the file before you sit down (left), Analyse the android’s body for clues (right)

Analyse Android: Choose this option first to scan the five clues and unlock the next two objectives. It’ll also unlock some of the dialogue options.

Select INTERROGATE next. The aim is to push the android’s stress levels, but without causing him to act negatively. His stress level will begin at 35% and will increase or decrease depending on each sub-choice you choose throughout the interrogation. You need to try to land it somewhere between 50-70%. 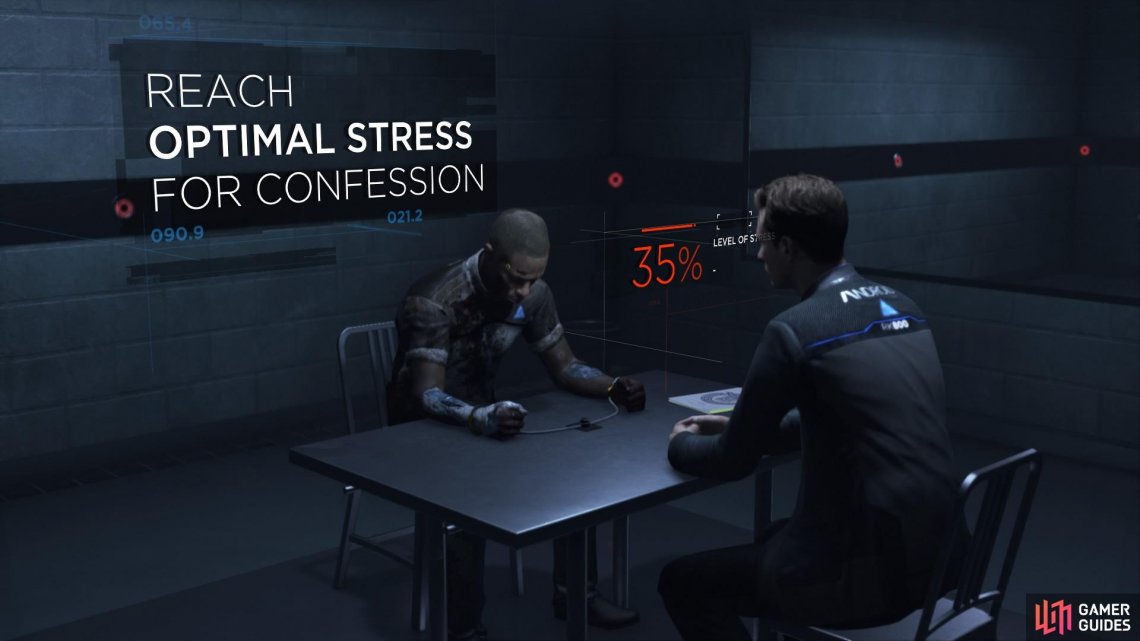 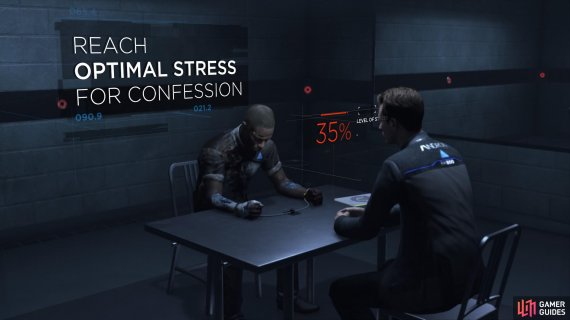 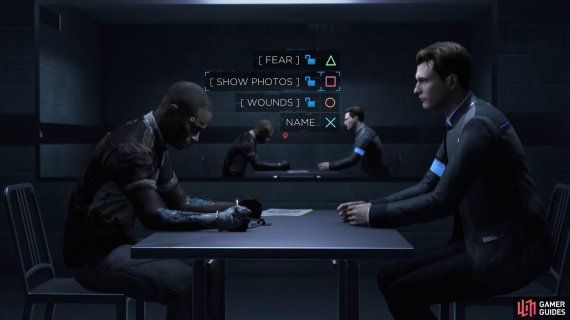 – FEAR will have no effect, and NAME will be met with silence but a decrease in stress. SHOW PHOTOS and WOUNDS will both increase stress. You get to choose two of these options, so from this point on, calculate your choices carefully.

– For the next two choices, you can pick from COMFORT, REASSURE, THREATEN, and BLAME. The first two will decrease stress, and the other two will increase it.

– For your last two choices, pick from SYMPATHIZE, THREATEN, TRUST, and PROBE MEMORY. Both SYMPATHIZE and TRUST will decrease stress, THREATEN will increase it a little, but PROBE MEMORY gives the android’s stress level a significant increase.

– After making two choices, the android will ask if it’s going to be destroyed – choose TRUTH (increase stress) or LIE (decrease stress).

– Then he’ll ask why you sold him out – choose TRUTH (increase) or LIE (decrease). 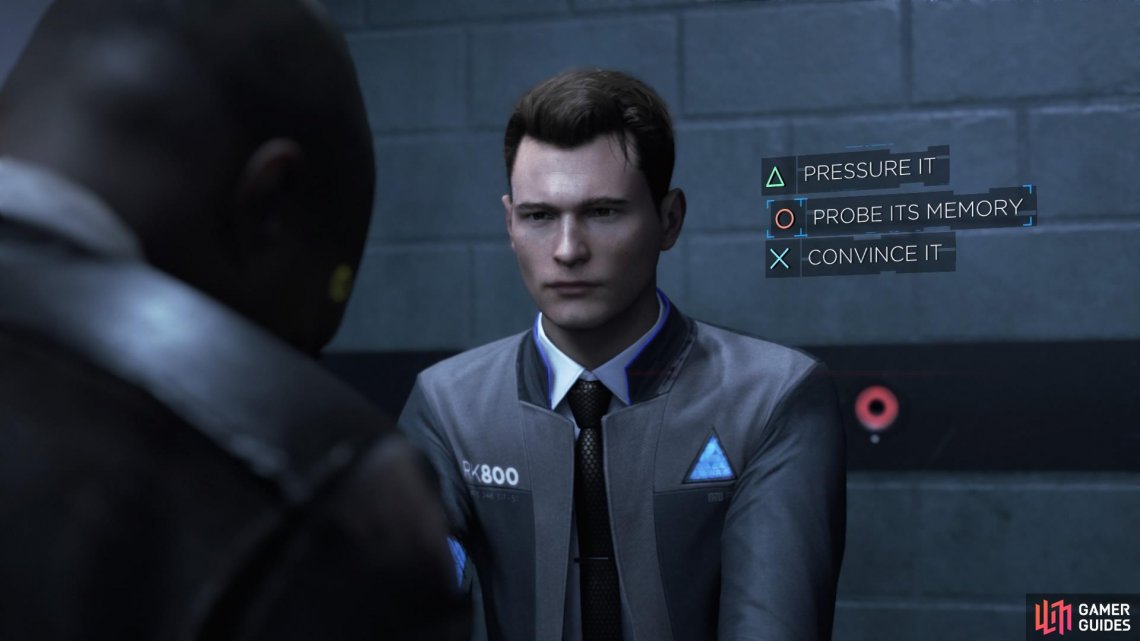 Choose Approach: Now you can choose which of the four paths to take – Connor is pretty close to breaking the android, but if your approach fails you’ll either have to choose something else or give up entirely.

– Convince It: This is a good area to play with the stress levels if you’re too low or too high (remain cautious) and you’ll be given three sets of options during this part. Each choice will have a different effect on the android. 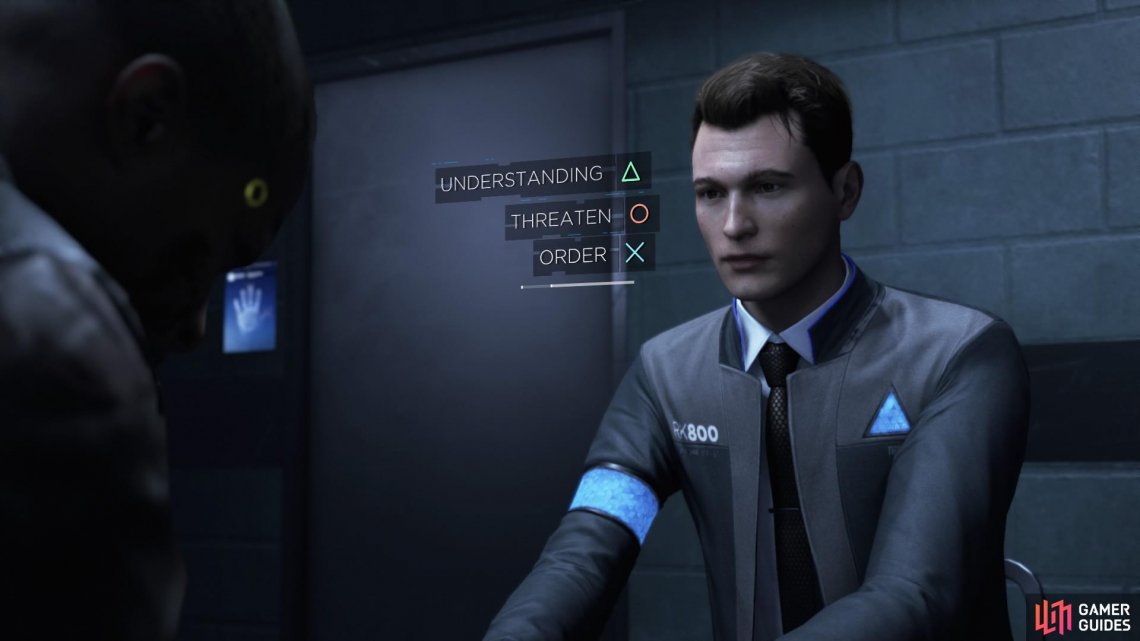 – Probe its Memory: Perform the button sequence when prompted and the interrogation is automatically successful. The stress levels will increase, as will Connor’s software instability.

– Give Up: If you fail to pressure or convince it, you’ll automatically give up and Leave the Interrogation Room.

For each of the above approaches, more nodes on the flowchart will unlock:

– Probe memory: This will unlock Probe Succeeds, Carlos Flashback, and then you can Express Regret by choosing APOLOGETIC. You can also Resist to Probe or Give Up.

– Convince: This unlocks Convincing Succeeds which increases your reputation with Hank, as well as Convincing Fails and Give Up.

– Pressure: This unlocks Maintain Pressure which also increases your reputation with Hank, as well as Pressure Fails and Give Up. 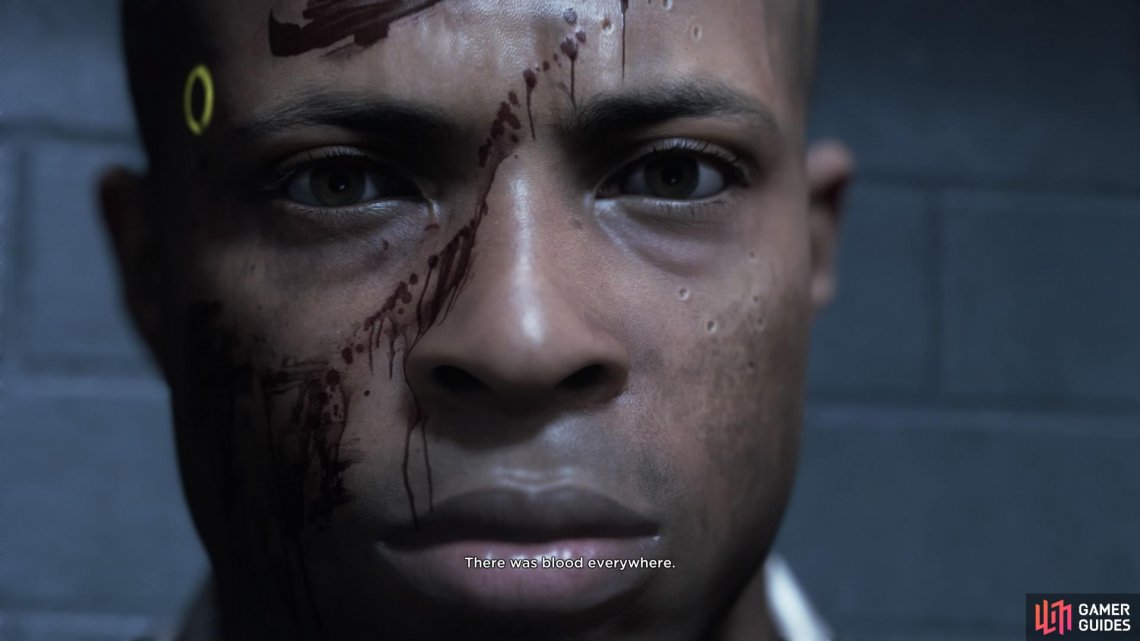 (1 of 2) Successfully draw out a confession 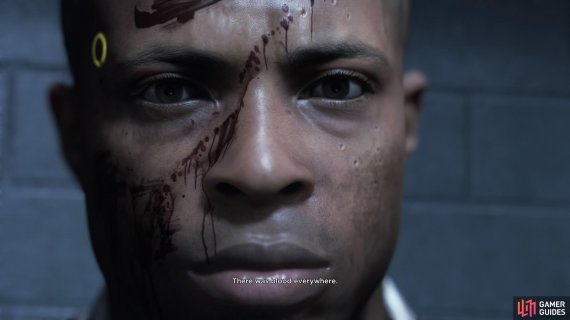 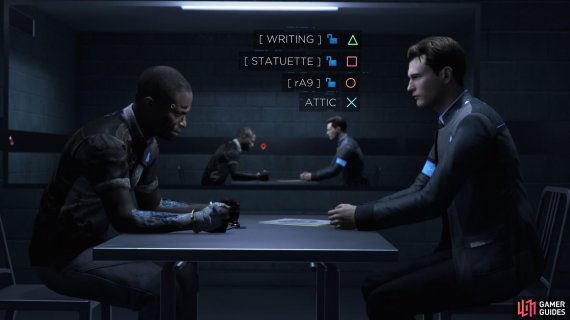 At the end of any of these approaches, the android’s stress level should be above 50% and he’ll begin to talk. With every answer, you’ll get some new questions based on what you uncovered during ‘Partners’:

When you’ve used up all of these dialogues, the Android Confesses and then you can leave the interrogation room. 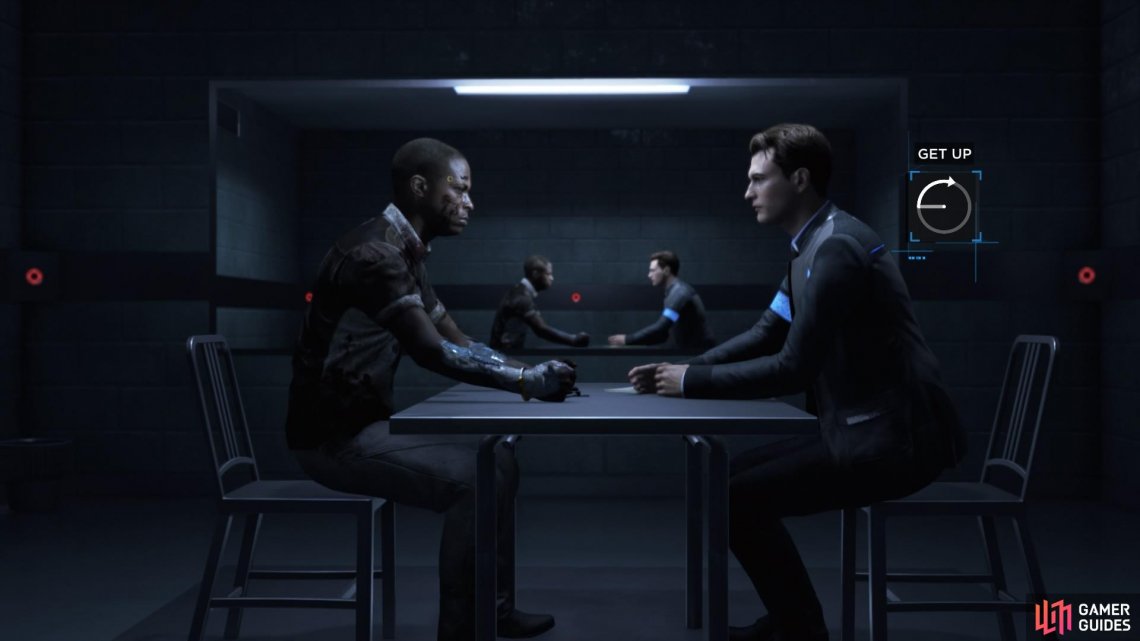 Leave Interrogation Room: This part of the chapter can have several things happen depending on where you have left the android’s stress level.

Chris Intervenes: Chris will attempt to take the android to its cell, but it causes his stress levels to rise.

– To save the android from malfunctioning, choose to INTERVENE three times consecutively. This will also increase your reputation with Hank. If the Android Trusts Connor (stress between 50-70%) and you chose to convince it rather than use pressure, he’ll whisper a clue to Connor on the way out of the room. Unlocking the node Android was sent back to its cell will increase Connor’s software instability.

– Choosing to GIVE UP at any time will cause the android’s stress levels to shoot up to 100%. This will have two outcomes. Android Shot Itself will happen at 100% stress and if you didn’t push it too far during questioning. If you did, the Android will shoot Connor as well as itself right after. 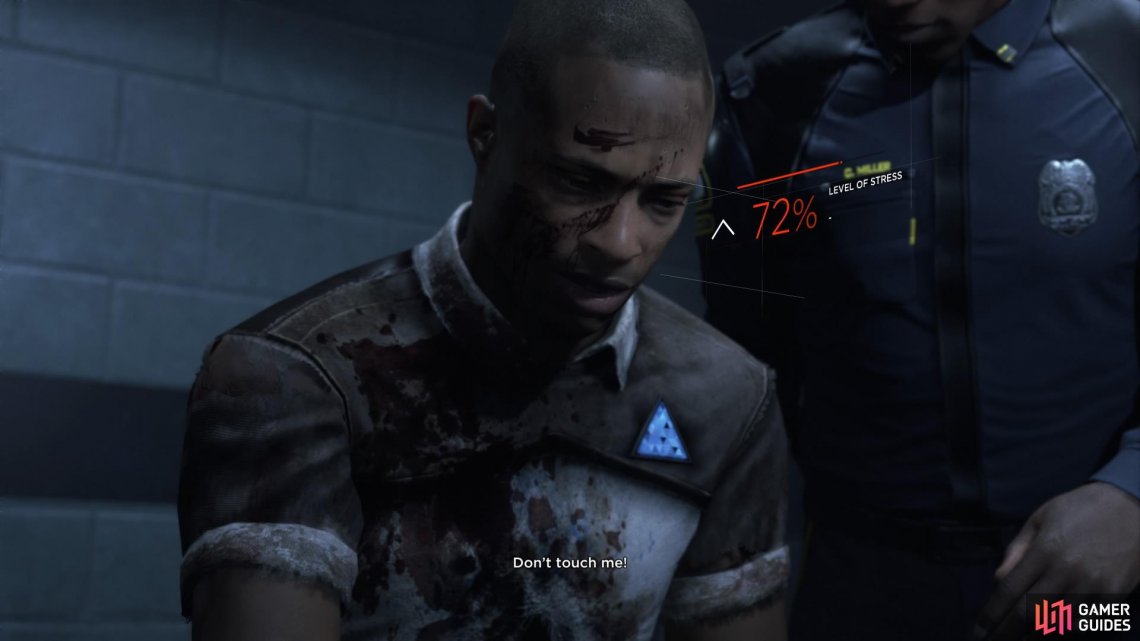 (1 of 2) The android’s stress will drastically increase 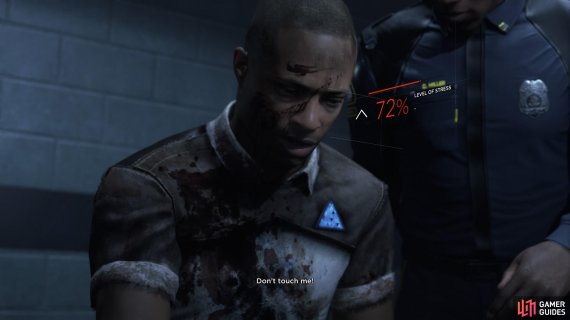 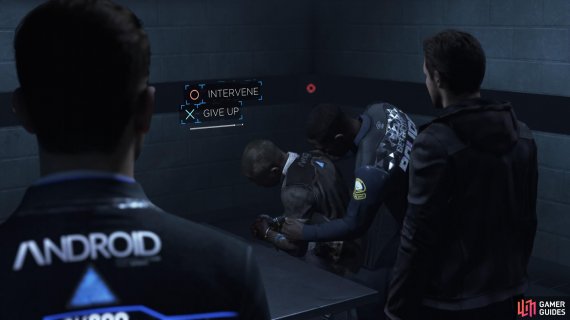 The android’s stress will drastically increase (left), Intervene to stop the android from self-destructing (right)

Android Starts Self-Destructing: If you pushed the android too far during questioning and its stress level has reached 100%, it will begin to repeatedly hit its head against the table.

– If you Intervene, the android will shoot Connor in the head. It will then proceed to shoot itself.

– If you Do Nothing, choose to give up and the android will only kill itself.

Note: If Connor dies, his software instability will decrease due to having his programme reset and placed back into the game.