Use the galaxy map to travel to The Hourglass Nebula. Once you are there, fly to the nearby prison ship, Purgatory to start the mission to recruit the convict.

After entering the Purgatory move forward until a conversation with the Warden starts. After the scene, continue along the defined path. You will see a prison guard on the right side of the area observing a beating (talk to him for a Renegade/Paragon action). Afterwards continue into the room at the end of the hall. Inside, make your way to the door at the back right of the room. As you enter a short scene will play, and a message will be relayed over the loud speaker - it looks like a routine pick up is turning into an escape for Shepard.

Quickly turn around and take cover. As you do, a group of Blue Suns troopers will enter the room along with a Centurion (shielded trooper) or two and a pair of FENRIS mechs.

Enter the room at the end of the passage… And then defend yourself!

Destroy the lot of them and exit into the passage outside. Kill two more troopers approaching the door with another pair of FENRIS mechs. Once they are done, take the first left. Fight your way through the troopers and Centurions who are guarding the hallway and open the door at the end. Kill the technician here and use the terminal behind him to free Jack.

After the story scene, pick up the Med Kit and the canister of Refined Eezo nearby before entering the now unlocked door on the left. At the bottom of the stairs, examine the YMIR mech corpse for a **** new Research Project (Damage Protection) . Find the hole in the wall and run into the passage behind it. Pick up the thermal clips here if you need them and check the prison guard corpse nearby for credits then exit through the next hole in the wall to the right.

Move to the left, and take cover on the raised catwalk here. In the room below you will see prisoners fighting against prison guards and a YMIR mech at the far side of the room. You will need to eliminate the soldiers and the prisoners before focusing your attention on the mech. After it is dead, head to the back wall of the room; when you reach the door, scan the shotgun on the ground for a **** new Research Project (Shotgun Damage) and then head up the stairs to the left to find a hackable Data Pad . Return to the door, pick up the thermal clips and investigate the dead prison guard before entering the next area.

Clear out the cell block of mercenaries and be sure to scan the shotgun (right) before continuing to the next area!

This room is essentially the same as the previous one; this time though, you will be on the ground floor. As you enter, step behind the crates on the left and eliminate the enemies in front on the ground floor and then the pair on the balcony overlooking the area. Move down into the depression in the floor and move to the right. Take cover just before the overpass and kill the 5-6 enemies that move in to attack you. When no more show up, climb up the nearby ramp onto the overpass where you will see a number of prison guards still kicking down the far end of the room and a YMIR mech as well. The mech will take a long time to reach you, so try and eliminate all the infantry units before it gets close. When the mech is the last enemy standing, just kite it in big circles, running across the balcony, down to the floor and up the two overpasses, shooting at it when you get the chance.

When the mech is dead, investigate the dead guard next to the exit before heading into the sub-tunnel where you can loot a box of thermal clips, a Med Kit and a W all Safe . Exit the next door for a scene.

It’s time to take on the main man of the big house - Warden Kuril himself! Kuril will chill out at the back left corner of the area within a shield and send a ton of enemies to do his dirty work. Once you have killed the initial wave of troopers and Legionnaires he sends your way, move up one of the sets of stairs and clean out the top area. Note that a small group of enemies will enter the area from where you entered and 5-6 baddies will emerge from a door on the right side of the upper platform. Two of these enemies will be Blue Sun s Commanders (shield over armour) so be sure to use your squad abilities (Overload etc) to help make taking these guys out a lot less painful.

When no more enemies are forthcoming, it is time to take on the warden. 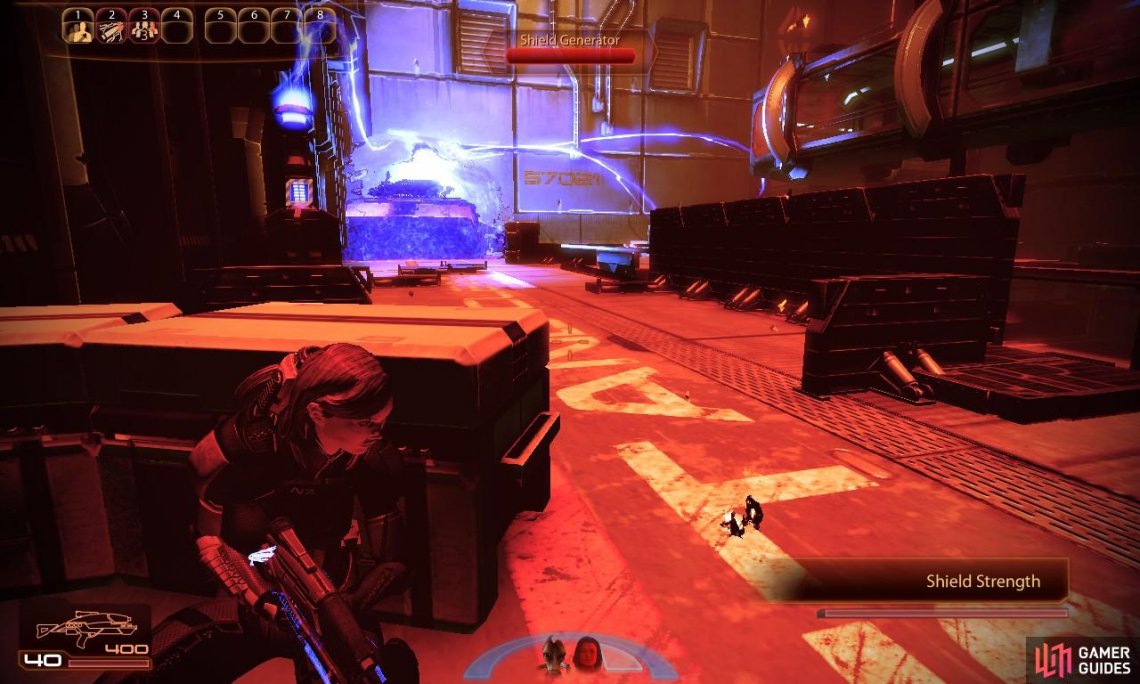 Destroy the shield generators to get at the boss man.

To do so, you will need to destroy the pylons around the room with the blue beams of energy emerging from the top. These are feeding the warden’s shield, so removing them will in turn remove the warden’s protective field. Destroy the first two, and then make a quick sweep of the room to make sure there are no more bad guys ready to sneak up on you and when ready, get yourself into cover and blow the third generator.

The warden will stay on the raised platform in the corner, in plain sight and is about as difficult to take down as one of the Commanders you faced before. Just stay in cover, remove his armor and shields and continue to pour ammo into him until he falls.

Once the warden is dead, a scene will play, Jack will join your crew and the mission will be complete.

After a quick chat with Jack on the Normandy, return to the galaxy map and decide where to go next.

Join us on your journey through the Milky Way alongside Shepard and his band of merry misfits all vying to stop a maniacal giant machine with a very deep voice from attacking colonies. Unlock the mysteries behind the Reapers and learn the horrific truth behind the missing colonies, all while attempting to keep Michael Sheen, er, The Illusive Man, happy. This is your story and the choices are yours but we’re here as a friendly guide to help you with some of those decisions.

You can expect to find a plethora of useful information such as: