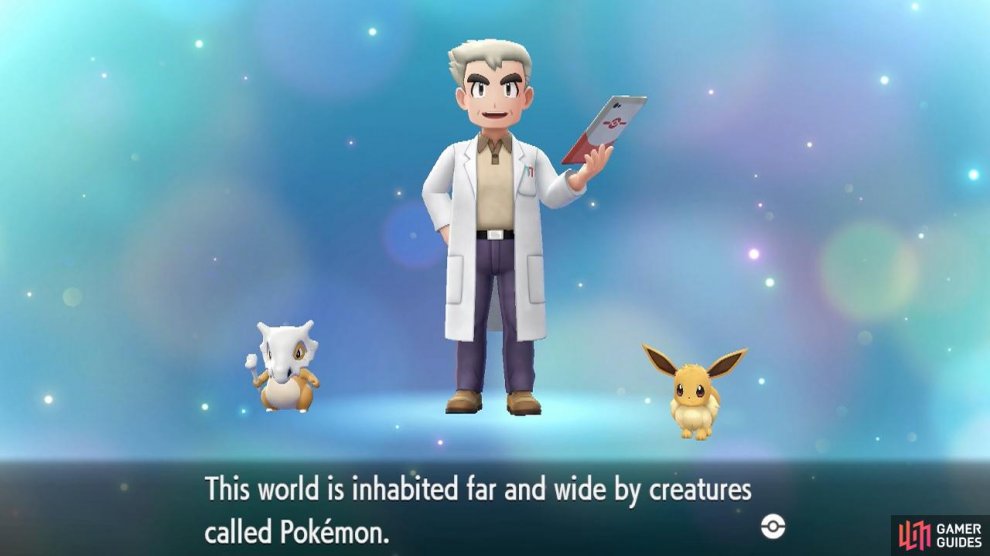 Even if you've never played a mainline Pokémon game before, you probably have some vague idea of what the journey entails.

You're a Pokémon trainer that's just started their career in the Kanto region. Your task is to catch and befriend mysterious creatures known as Pokémon, and use them to battle other trainers like yourself. At the same time, you're asked to fill in the Pokédex--a device containing data on all the Pokémon native to Kanto.

To prove your skills as a Pokémon trainr, you must defeat the eight Gym Leaders--some of the most skilled trainers around--and obtain their badges. Once you've acquired all eight Gym badges, you can step foot on the pinnacle of the Pokémon world: the Pokémon League. There, you'll face the best of the best: the Elite Four and their Champion.

You're a young boy or girl who lives in Pallet Town, not unlike a certain Ash from the Pokémon cartoon. Despite your age, you don't really have any responsibilities like going to school, and your Mom never gets worried when you travel for days, weeks or even months. As far as we've observed, you never seem to eat or sleep, so you're basically a superhuman.

These are your slaves... er, ahem, best friends. Although you've got some pretty remarkable powers, you're severely lacking in the fighting and getting-things-done department. That's where Pokémon come in real handy. Your Pokémon buddies can help you battle against other Pokémon, and they can even be useful when traveling the world.

You'll catch your very first Pokémon at the very beginning of the game. This will be Pikachu in Let's Go Pikachu and, you guessed it, Eevee in Let's Go Eevee. From there, you're responsible for catching new Pokémon and raising your Pokémon team. The more you train your Pokémon, the stronger they get and the easier your journey will be. 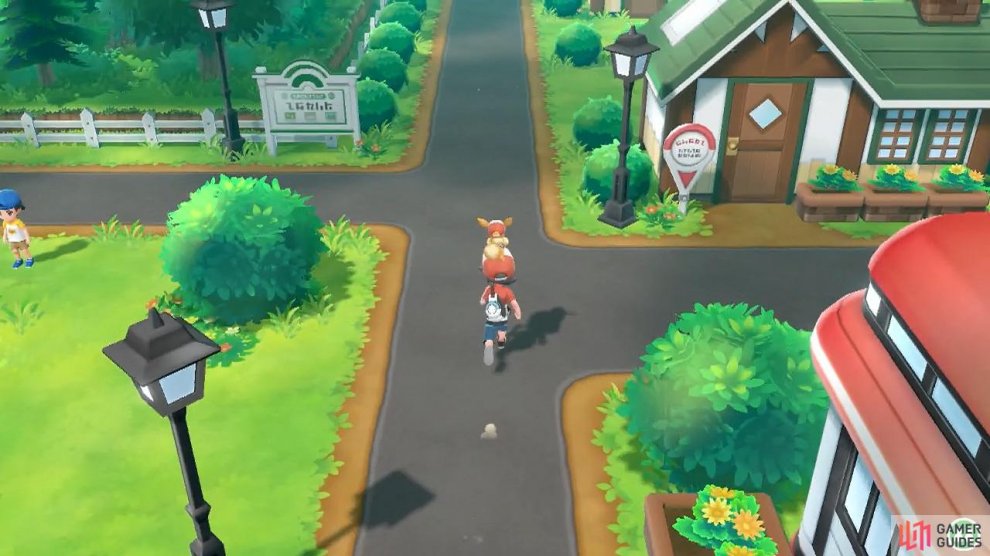 You'll be traveling across the Kanto region, which is where the very first Pokémon games--Red, Blue and Yellow--took place. Decades later, Kanto has been completely recreated in full colourful 3D. However the general layout of the region is pretty much the same. There's still the same towns, cities, forests, routes, caverns, etc.

Locations are generally divided into a few types.

Town or City: These are places where people live together with Pokémon. There is usually a Pokémon Centre, where you can rest your Pokémon, and a Poké Mart, where you can buy supplies. Sometimes, there might be a Pokémon Gym.

Route or Dungeon: These are places largely inhabited by Pokémon and where you can catch wild Pokémon. Very often, Pokémon trainers gather here to battle each other. Routes are roads that connect different locations, while dungeons are generally more maze-like.

In most cases, the only way to get new Pokémon is to catch them in the wild. Unlike previous Pokémon games, you can physically see wild Pokémon roaming around in routes and ungeons. If you touch the wild Pokémon or they touch you, you will enter catching mode. We'll discuss catching Pokémon in more detail very soon, but for now, we'll go over the basics.

Originally, you used to battle wild Pokémon, but that's generally no longer the case. Instead, they've gone for a more friendlier approach. After encountering a wild Pokémon, you can throw Poké Balls at them by using motion controls. Each time you throw a Poké Ball, there's a chance the wild Pokémon will stay in the Poké Ball--and become yours--or break free.

In the world of Pokémon, Pokémon battling is a serious sport, as well as a hobby. Since you're a Pokémon trainer, you'll be challenged by other trainers wherever you go, so you'd better get used to it! On very rare occasions, certain powerful or angry/surprised wild Pokémon may attack you, which also triggers a Pokémon battle.

If another Pokémon trainer sees you, they will challenge you to a Pokémon battle there and then. You cannot run from a battle; you can only win or lose. Depending on their position, it's possible to avoid certain trainers by moving outside of their line of sight.

Now we've got a whole section on Pokémon battling, so we'll just go over the basics really quickly. Battles are turn-based, with each trainer selecting a move for their Pokémon to perform, while wild Pokémon use random moves. The battle is over when one side no longer has any Pokémon able to fight. Hopefully that's your opponent and not you!

If you win a trainer battle, you earn experience points for your Pokémon, which can let them Level Up and become stronger. You'll also receive money, which you can spend in Poké Marts, and Poké Balls for catching more Pokémon. Whereas, if you win a wild Pokémon battle, you can attempt to capture the wild Pokémon that you fought. 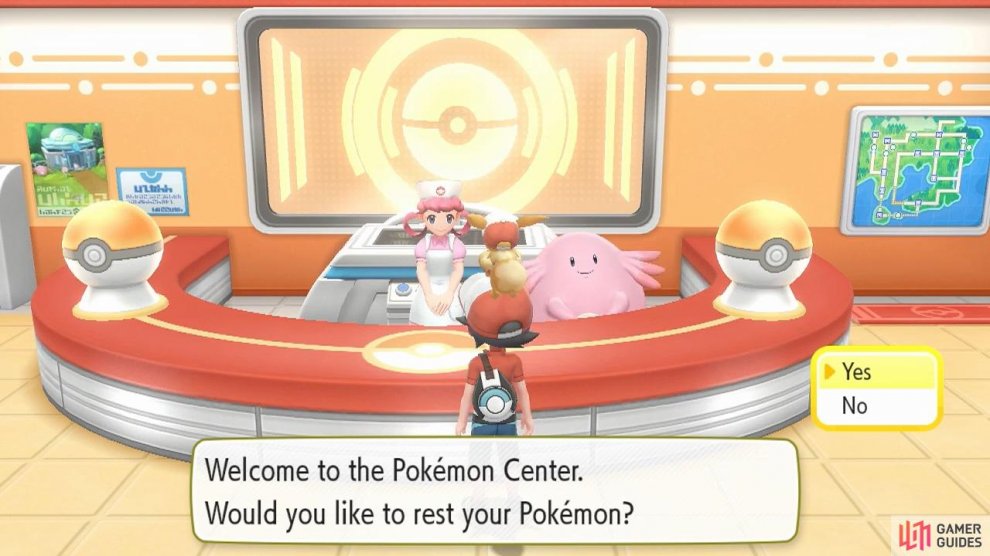 When you battle with your Pokémon, their HP and PP may go down.

PP (Power Points) are the number of times your Pokémon can use a particular move. Each move has its own PP value. Typically, the better the move, the less PP it has. Once a move has 0 PP, you cannot use the move anymore. Likewise, PP can be restored by using items or by visiting a Pokémon Centre.

As you catch new Pokémon, they will be automatically added to your party. Pokémon in your party can be selected during Pokémon battles. You can have up to 6 Pokémon in your party at one time. Once your party is full, Pokémon that you can catch will be sent to your Box instead. Your Box can be accessed via the Party menu outside of battle.

Last but not least, it's very important that you save your game regularly! This can be done by opening the menu with the X Button (or by pressing the top, red button on the Poké Ball Plus) and going to Save, towards the far right. This game does not support automatic saving, so make to save before shutting down!