Welcome to is Reus’ first training session. In this session you will learn how to:

First thing’s first, move your two giants together. To select a Giant you can either tap the numbered hot key associated with them (look to the bottom left) or right click their portrait down in the corner. Once selected simply right click on a tile to send your Giant there.

Next we’ll learn about Terraforming. Select your Ocean Giant and then select his ‘create ocean’ ability by either tapping the hotkey (Q) or selecting it from the bar at the bottom. Next, right click in the world to create an Ocean!

The Ocean occupies 9 Tiles and generates 13 tiles of Fertile land to either side of itself. This land can then be used to create Swamps and Forests, as we will do in a minute. The Ocean is an important thing to have, as its creation facilitates the building of other elements, but nomads will not create a village on the Ocean (No Mel Gibson rivalling Waterworld antics here) and the resources you can place on an ocean are limited to animals. 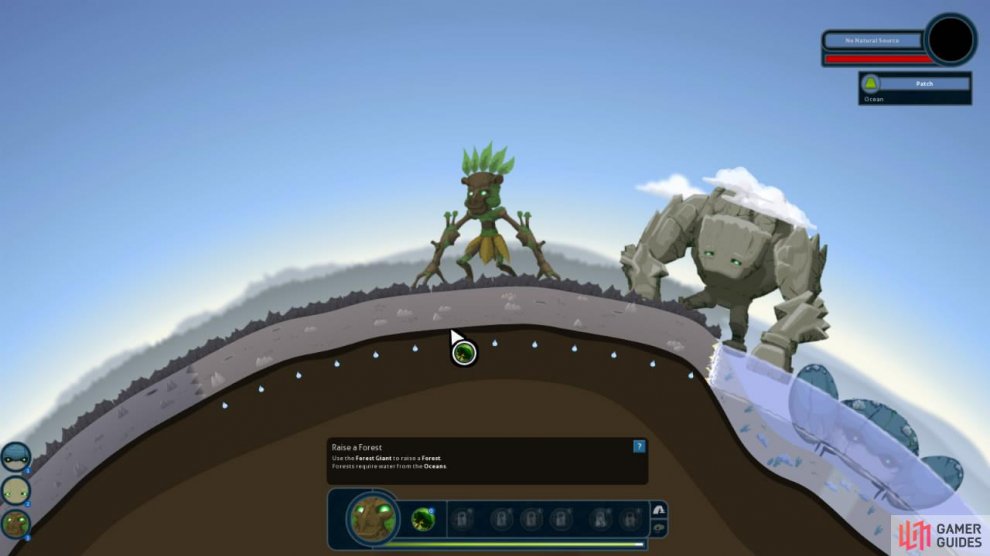 With this done your Forest giant, and his massive money face, will erupt from the ground. Say hi. Then, once the pleasantries are over, select his first ability as you did with the Ocean Giant’s ‘Create Ocean’. This is the ‘Create Forest’ ability. Look at the floor and you’ll notice some darker ground emerging from the Ocean, this is where we can place the Forest.

The Ocean generates 13 Tiles of fertile land, and the Create Forest power occupies 13 tiles, convenient no? Get used to the feeling of creating an Ocean and a Forest, it will be an invaluable tool.

Next lesson, deserts. Select the Rock giant and select his terraforming ability. Unlike the other Giants the Rock Giant can create terrain all by himself, raising a mountain that creates a desert on both its sides. It’s worth creating this mountain on the other side of your Ocean to better understand some of the mechanics pertaining to this particular terrain.

A desert will be formed at the base of a mountain as long as the ground is dry, and has not been made ‘fertile’ from an ocean. While this could be seen as limiting, it’s a good thing to know as it’s something you can use to ‘contain’ a desert if need be. 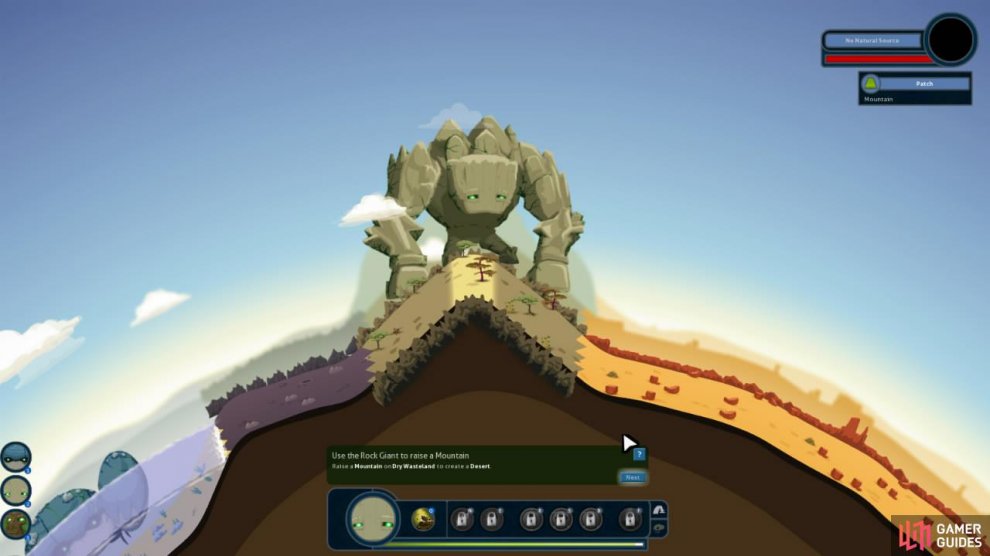 The last stage of this training mission is to cover a large portion of the world in habitable land. To do this you can either use the Rock Giant to raise more mountains, or perform another Ocean and Forest duet between the Ocean and Forest Giants. After you do this, the Giants will fall asleep.