Leave Karst’s house and cross the bridge northwest from Mother’s Cradle, continue northwest through the first fork and at the second turn east. At another fork turn northeast to reach a Campfire near the “Northern Embrace Gate”, where you’ll find Rost waiting for you.

When you’re ready (and you ideally have plenty of Fire Arrows and some carrying capacity upgrades), talk to Rost. Exhaust all Aloy’s optional dialogue options to come to a decision about her relationship with Rost, after she presumably stops being an outcast, announce your acquisition of the Tripcaster, and of course get rebuffed when you ask about the upcoming adventure. Eventually Aloy will decide to turn in for the night, prompting you to rest (and hence, save) at the nearby Campfire.

Do so, and when Aloy wakes up her and Rost will pass through the nearby gate to their destination. When you’re back in control continue forward and loot the remains of the Sawtooth to hopefully score a healthy supply of Metal Shards and Blaze. Ridge-Wood can also be found along the trail, so if you haven’t been grinding, make sure to at least grab the resources placed in front of you and craft as many Fire Arrows as you can.

Leave the safety of the Embrace to encounter the remains of a new machin (left). Follow the trail and dispatch a Watcher enroute to the real challenge (right).

Continue down the trail and Rost and Aloy will discuss the devastation lying ahead of them. Loot another Sawtooth at a fork before heading downhill to the north, northeast, along the way harvseting a Watcher. At the bottom of the hill turn north, northwest through more devastation, being wary of the Watcher that’s patroling the road up ahead. When it’s been dispatched continue forward, looting machines and plants for useful resources as you go until eventually Rost points out a Sawtooth roaming the area. This is your final test, and Rost is leaving you to your own devices here, for better or worse. 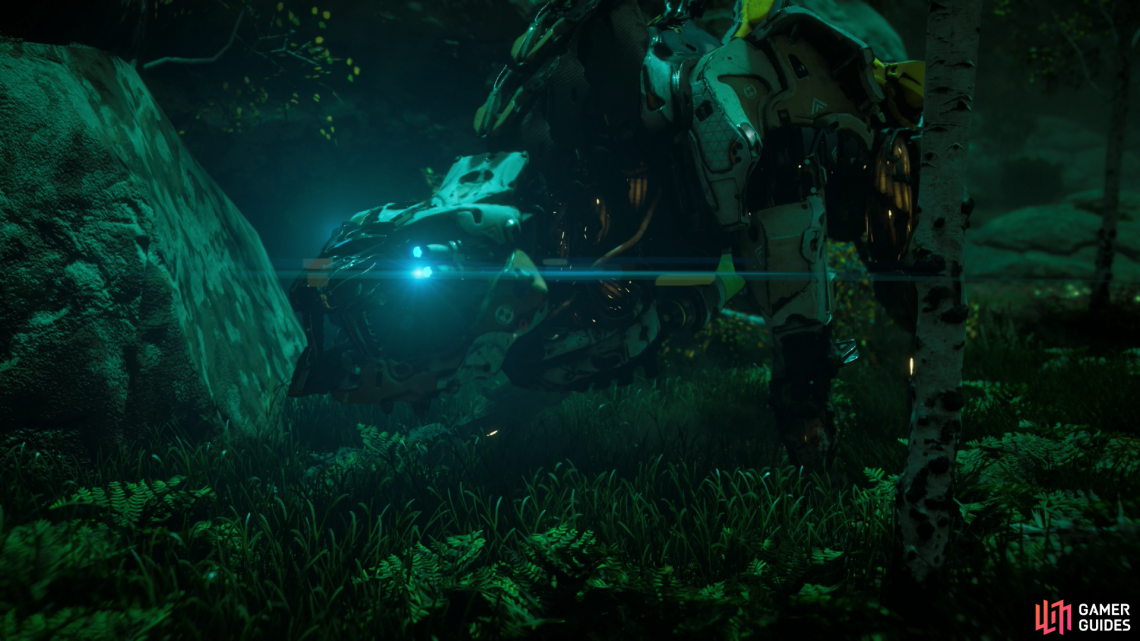 When you’re back in control crouch and continue forward to find a Supply Crate with a few last-minute goodies - enough resources to craft a few Shock Wires, should you need them. If you haven’t used the Tripcaster yet, however, you should have more than enough ammo to deal with the Sawtooth. Activate your Focus and scan the Sawtooth to reveal that it’s weak to fire and have a Blaze Canister on its underside - that Blaze Canister should be your first target.

Equip your Tripcaster by holding down [L1] and moving the [Right Analog] to whichever of the four slots to which the weapon is assigned. Once done, turn east and aim at some rocks across from the ledge you’re on - aim at about waist level (remember, it’s a TRIPcaster, no use if the line is too high to be triggered) and fire the first line, then aim at the ground below you and fire the second end of the line to create a wire spanning the path to the east. If you want to play it safe, sneak south along the ledge and place another line across the path to the east.

Once done, equip your Carja Hunter Bow (with Fire Arrows!) and make sure the Sawtooth isn’t nearby. When the coast is clear, drop down to the east and take cover in some tall grass near the fork in the road. Wait for the Sawtooth to complete its route, where it should stop near you. Scan it, wait for it to stop, and aim at its Blaze Canister with a Fire Arrow.

Use your Tripcaster to plant Shock Wires (left), then shoot the Sawtooth’s exposed Blaze Canister (right).

After firing, wait for the Blaze Canister to explode (to confirm a hit) and deal massive damage to the Sawtooth. After that, there’s little use in staying hidden, stop crouching and roll back south behind the first Tripcaster line you placed. Don’t stand too near to the Tripcaster line, however, as the Sawtooth is fond of leap attacks, and if it senses it’s close enough to leap on you, it might do so and clear the Tripcaster line.

Give the critter plenty of incentive to come after you by pelting it with Fire Arrows and when it trips your trap (and subsequently gets stunned) run up to it and pelt it with strong attacks. If you’re lucky you’ll be able to finish it off before it can get up, but keep an eye on the blue circle which indicates its stunned status - the white circle around this icon shows you just how much time you have left. If the Sawtooth recovers before you can finish it off, simply run back behind the second Tripcaster line and try the routine again, the second time it gets stunned should be more than enough to finish it off.

Lure the Sawtooth into one of the Shock Wires you planted (left) then take advantage of the stunned machine by punishing it with your spear (right).

Loot the Sawtooth and Rost will come and pester you with questions, obviously fishing for a specific answer. They’ll talk about the future and Rost will head off, vague, dismissive and solitary as usual, promising to meet up near Mother’s Heart, where you’ll attempt the Proving.

Defeated the Sawtooth that threatened the Nora.