Starting off in Song’s Edge again, highlight the final green exclamation mark on your map and follow it round to the edge of a cliff. There’s a man, hands bound behind his back, at the mercy of a shaman and his werak’s Chieftain. Interact to listen in – the man, Inatut, is about to be exiled for the murder of a Carja hunter; he claims this is a crime he did not commit. When the shaman and chieftain leave, speak with Inatut to hear his side of the story. Aloy will then take it upon herself to find the truth. 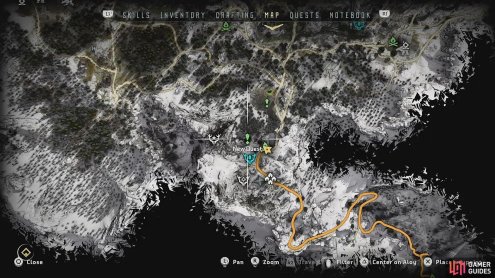 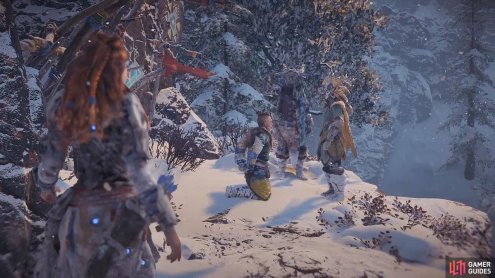 Your first stop is the Carja outlander’s camp not far from here, so head there to speak with Furahni. Gather whatever information you want from her to move to the next objective. Head West to the clearing where the brawl took place to investigate. Use your Focus to highlight and examine a bloodied tree branch, and then a tree detritus. Climb the tree and use your Focus again to highlight the tracks of the murderer. Jump through the trees, land on the ground below, and follow the tracks up a cliff face. 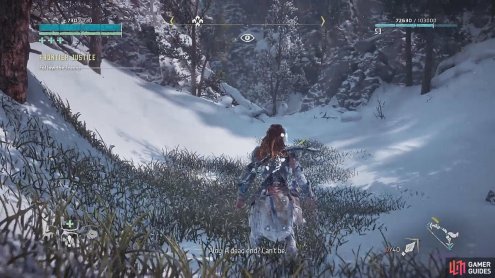 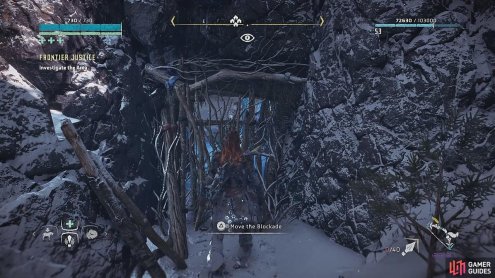 Keep following the path – eventually you’ll come to what appears to be a dead-end, but further investigation will lead you to a wooden blockade at the back between the rocks. Move it out the way and head through the passage.

Once you climb the rocks, you’ll stumble across three Banuk hunters talking by a fire. They spot you instantly and engage you in a fight. These guys are actually kinda tough, with one of them constantly lunging at you with a spear while the other two fire ranged weapons from the slopes above. Proceed how you will until they’re all down, and then speak to the dying assassin lying by the tree on the left.

When the conversation is over, you need to reach Inatut to save him from his exile in the mountains. On the left, climb up the ledge to search for the Carja headdress stolen by the assassin, and as proof of Inatut’s innocence. Then pick up the Carja armour to take with you to Inatut. 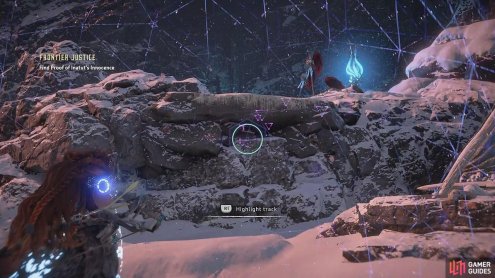 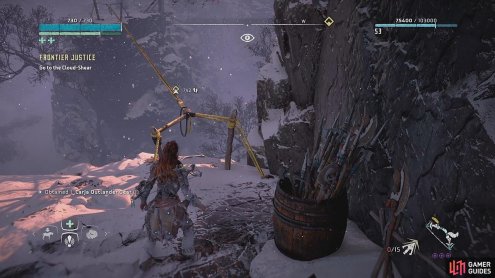 Traverse the yellow wires to leave the area and follow the cliff to find the rappel point. Continue to follow the waypoint – you’ll come across a campfire, so save your progress, and go inside the dilapidated wooden hut. There is a Text Datapoint – Park Status to the left of the entrance. From here, you have a long way to run, so keep following the path. Once you get over a small incline, however, you’ll come across a bunch of machines. This is one of the Fireclaw locations you can complete for one of your errands, but it’s surrounded by Daemonic Behemoths as well as a Scorcher site to the right.

The path to the waypoint runs right past the Fireclaw, but if you don’t feel like getting into a long battle with all of these deadly machines, there is a way around that will enable you to bypass them. Stick to the snowy slopes to your left, through the trees, until you find the path again further on. You should go unseen and the waypoint will pop up in front of you again. You’ll also miss out on a campfire, but it’s a small price to pay for leaving the area still intact. 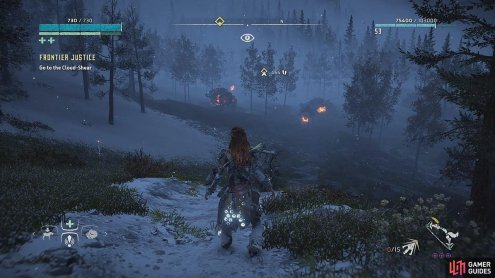 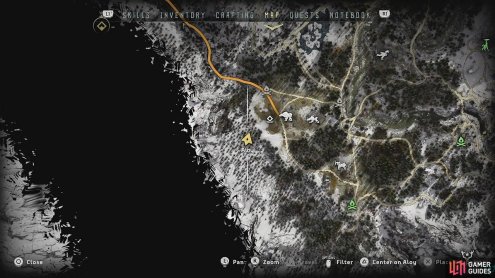 Go up the rocky incline and across a frozen river. There’s a ledge to climb up and a Lv 18 Glinthawk waiting for you – take it out. On your right are some handholds for you to traverse around the cliff and reach the next area. Two more Glinthawks await you at the top, so take them out as well before you continue. 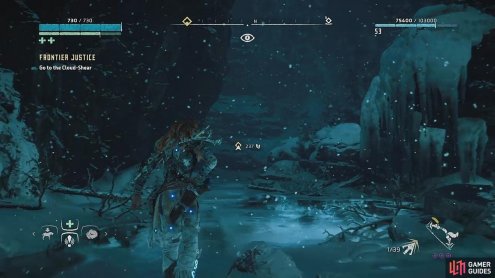 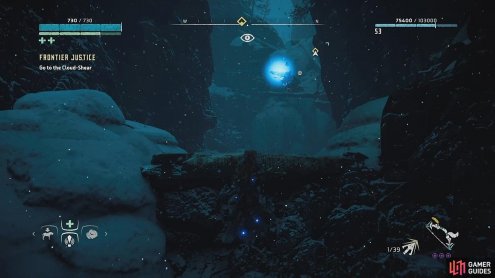 Once they’re down, climb the rocks and follow the waypoint marker around the cliffs until you reach the Cloud-Shear. Use your Focus to find Inatut huddled down behind a rock. Interact with him to give him the Carja armour – and then you’ll be ambushed by four Daemonic Scrappers. 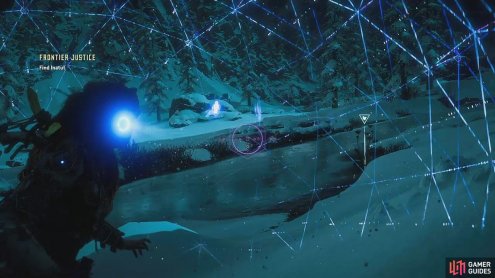 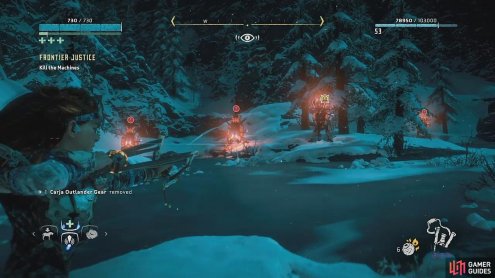 Luckily, they go down easy, so this fight shouldn’t last very long. Unluckily, they are immediately followed by two Frostclaws. As you know, they take a little longer to destroy. Inatut will help you, but you will have to inflict most of the damage yourself. If you can find a high vantage point, use it. Otherwise, the usual hit-and-run tactic may still be the best option. 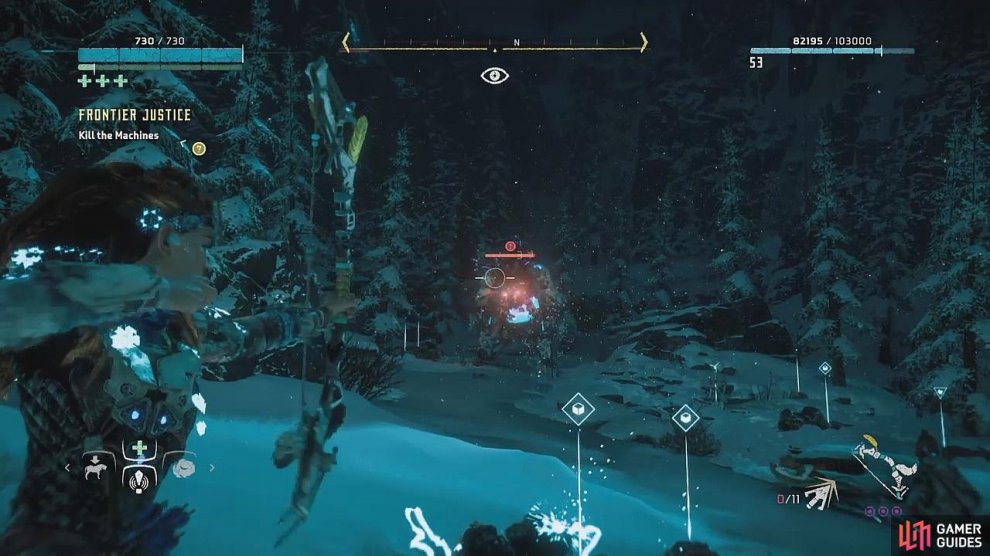 When the Frostclaws are finally defeated, talk to Inatut. It’s time to return to Song’s Edge and speak with the chieftain to claim his innocence. You can fast travel there if you don’t wish to take the long trek back by foot. When you get there, the chieftain and shaman are not impressed by Inatut’s new outlook on the werak and how they betrayed him. Find Inatut one last time to complete the quest.