To activate this side quest, go to Song’s Edge and seek out Burgrend who’s standing by one of the tents. His green exclamation mark is the lowest side quest marker on the map of the Cut. He asks you to seek out some Banuk hunters who have yet to pay up for the metal shards they wish to acquire from him – they seem to have gone missing. 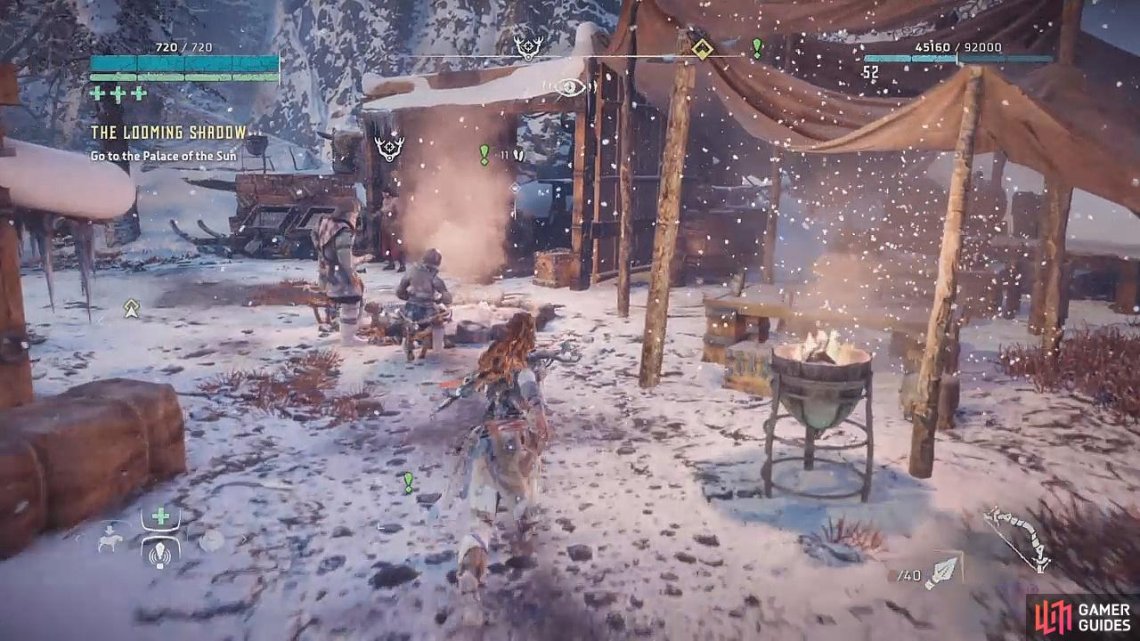 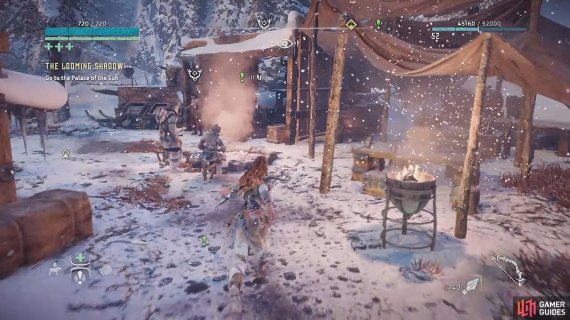 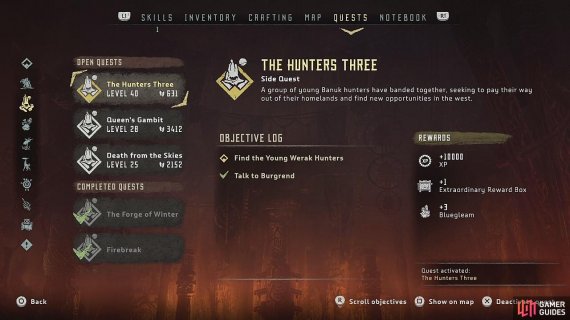 Speak to Burgrend in Song’s Edge (left), and activate the quest (right)

There’s a campfire right next to the waypoint marker, so if it’s one that you activated earlier on, simply fast travel. Otherwise, follow the trail until you come across three Banuk hunters – Tatai, Urkai, and Tulemak - standing next to the aforementioned campfire. Interact with them to be reluctantly invited along on a hunt. 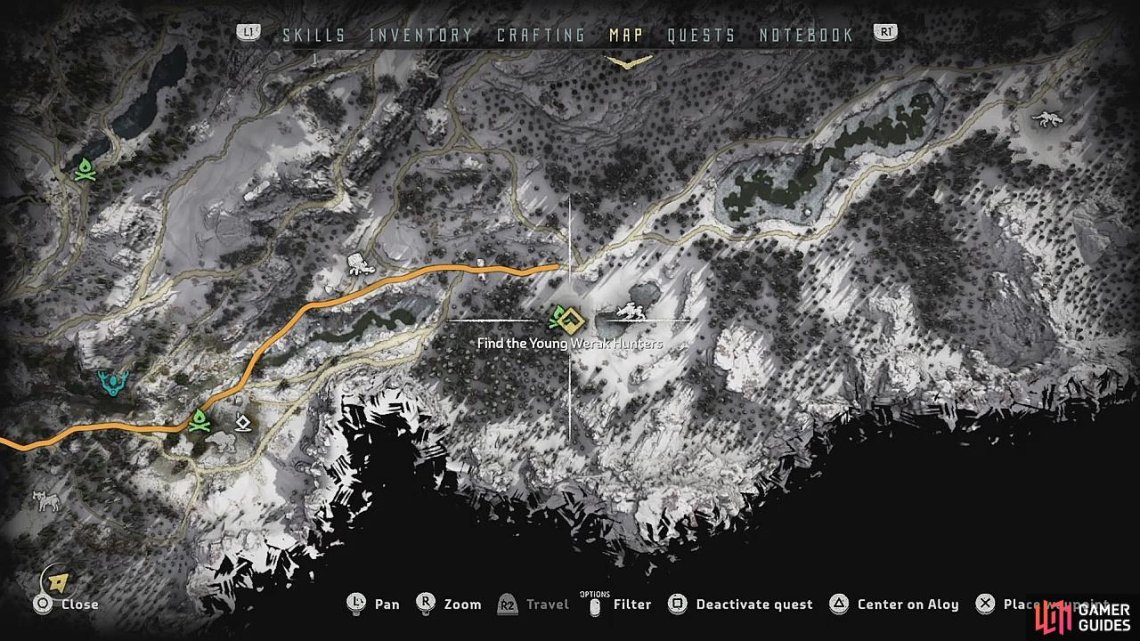 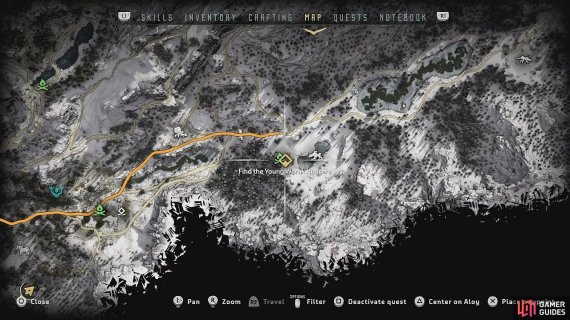 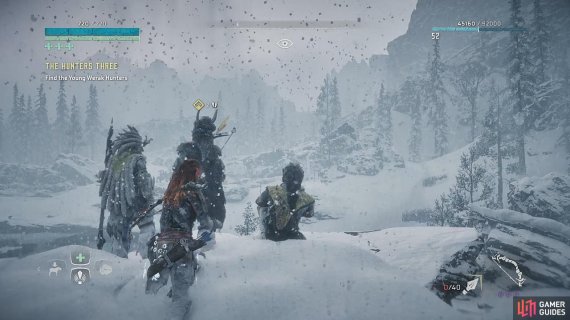 Follow the trail to the Scorcher site (left), Speak with the three hunters (right)

You might recognise this area from an earlier quest, with two downed Towers surrounded by a Scorcher and some Longleg machines. The Scorcher is the aim here, as it carries something that Burgrend wants and that the hunters are too inexperienced to harvest.

You can approach the situation however you like – just remember to be aware of the Longlegs. The Banuk hunters will be fighting alongside you, though, so the Longlegs may leave you alone in favour of trying to fend them off instead. Once the Scorcher is down, loot it to Gather a Scorcher Claw for Burgrend. 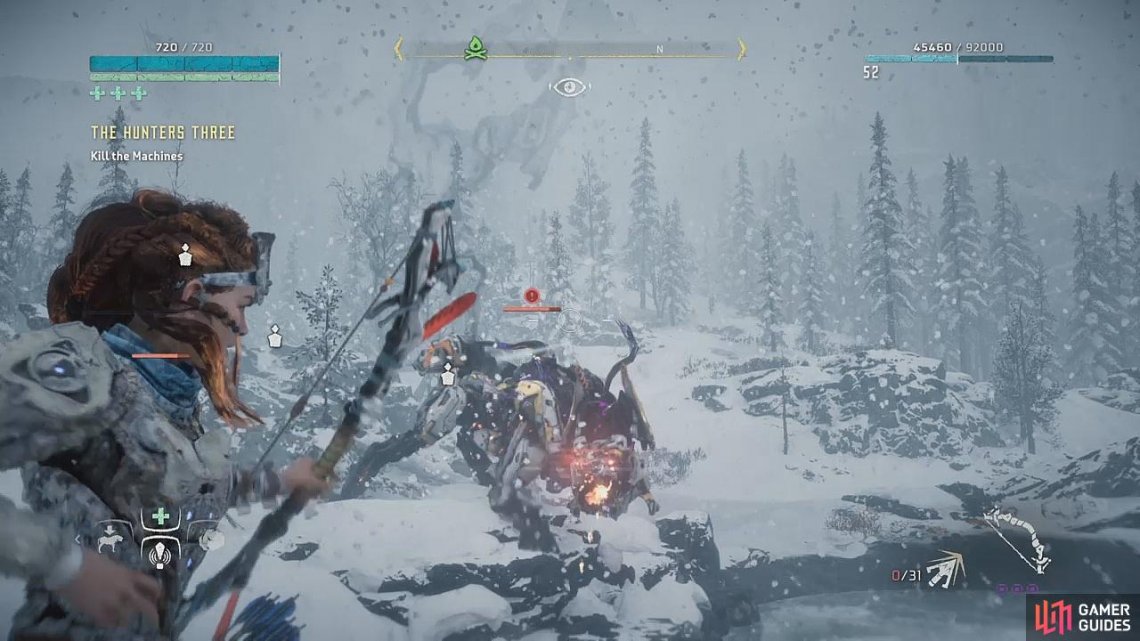 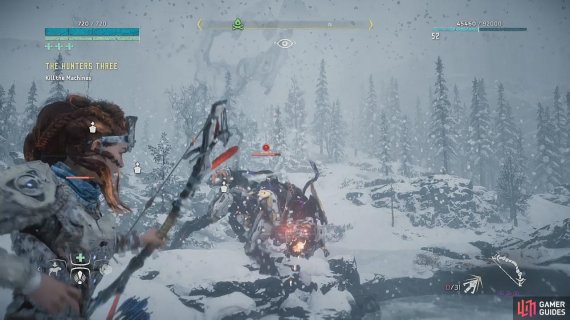 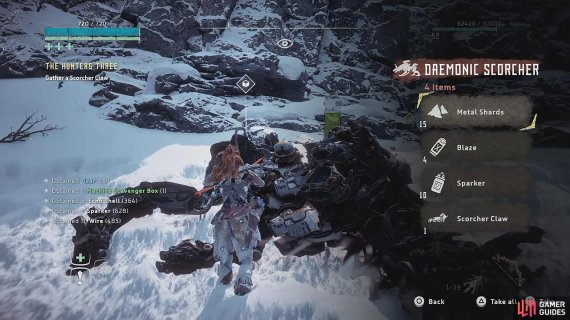 Afterward, speak with the snarky female hunter to discover that the three of them are only making this deal with Burgrend because they need enough metal shards to leave the Cut. But when you try to hand over the Scorcher Claw, Tulemak invites you along to the next hunt – it seems they want your help after all, even if they don’t know how to be nice about it. They intend to go to Hollow Hall and want you to meet them there.

The trail is longer this time, so if you have any campfires activated closer to the waypoint, it might be worth another fast travel. If not, you can either go on foot or override a machine to get there a little faster. 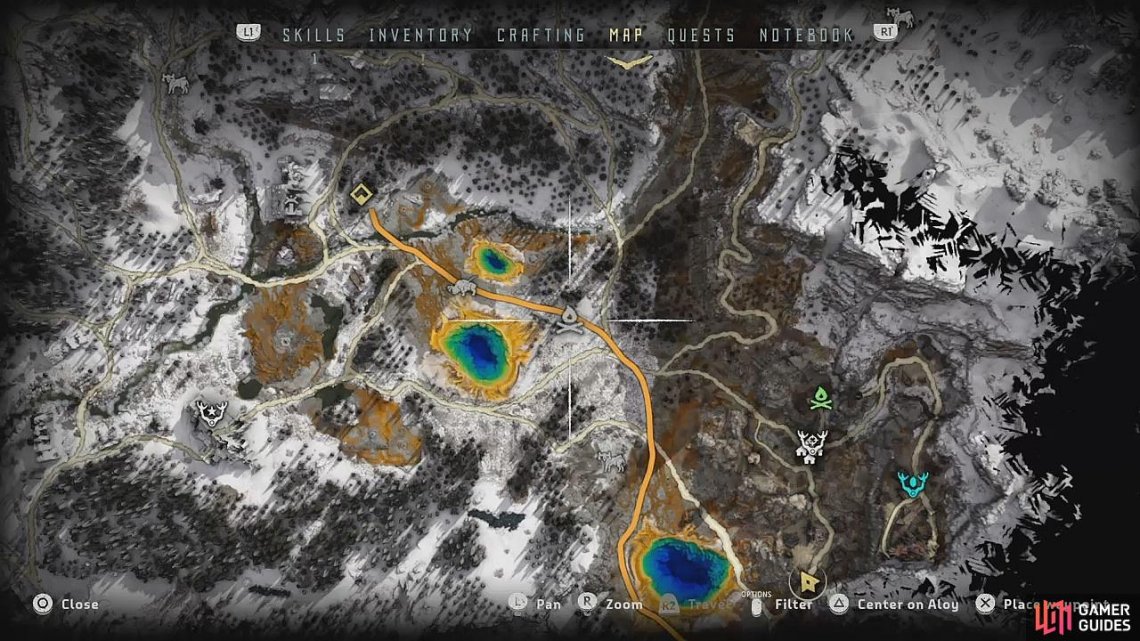 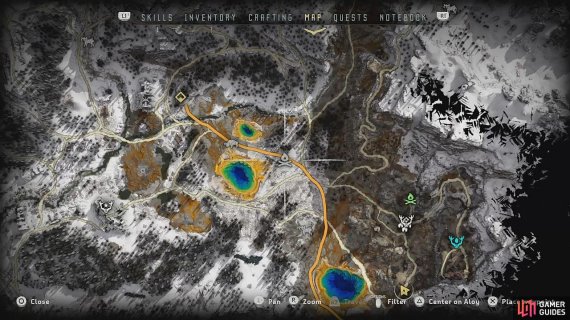 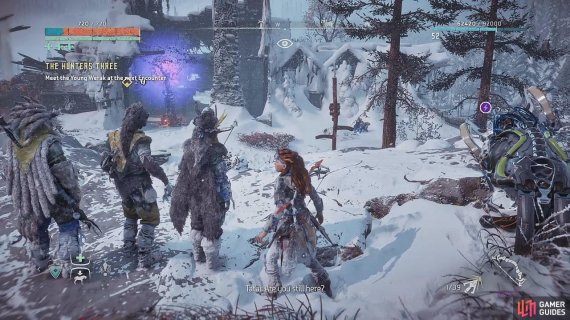 Once you reach your destination you’ll find the three hunters looking out at a control tower by the ruins. This area is inhabited by Stalkers, which hold the next component you need to gather, as well as Scrappers. But, as usual, taking out the Tower should be the first port of call. Once all the machines are down, Gather a Stalker Sinew.

Note: Head over to the control tower inside the ruin – on the right, inside a small alcove, you’ll find Animal Figurine 1 hiding in the snow.

Now go speak to Urkai, where the three hunters will tell you exactly why they’re trying to get away from the Cut.

The last component you need is a Snapmaw fang – it’s not far from where you are, so head west. When you reach the end of the trail there will be a campfire. If the hunters aren’t there to meet you yet, save your progress at the campfire to activate a cutscene. Once they’ve had their fun, it’s time to kill more machines. 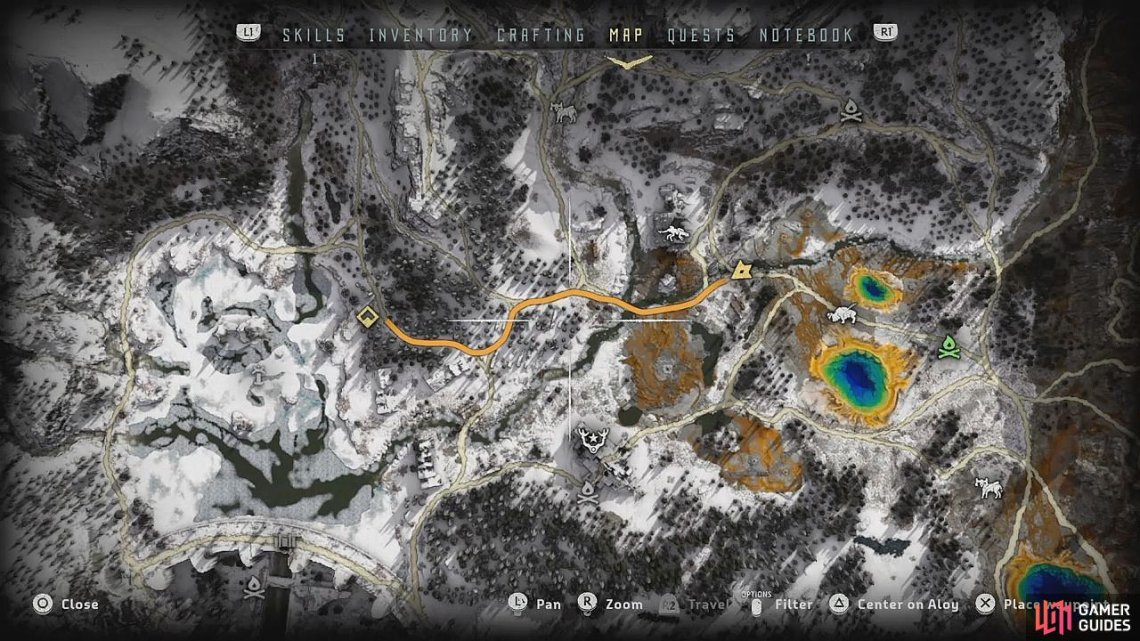 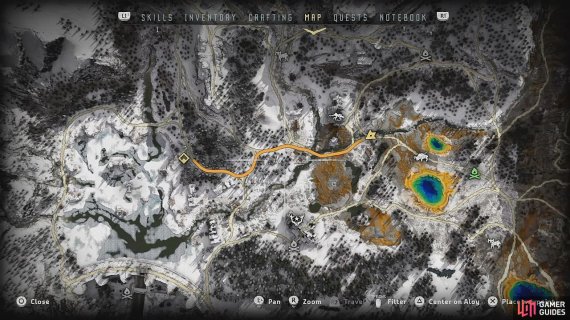 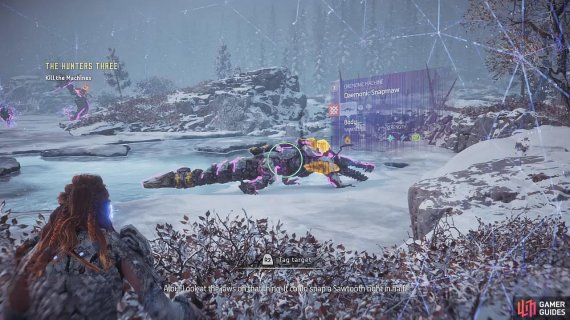 The area is surrounded by three control towers, but luckily you can grab the attention of the machines enough to lure them away from any of the Tower’s healing pulses. You’ll have to get through Scrappers, Longlegs, and, most importantly, the Snapmaws.

When you’ve destroyed all the machines, Gather a Snapmaw Fang and then proceed to disable the three control towers while you’re here. Afterward, speak to Tulemak – the hunters are ready to leave the Cut.

Return to Burgrend in Song’s Edge to finish the quest.