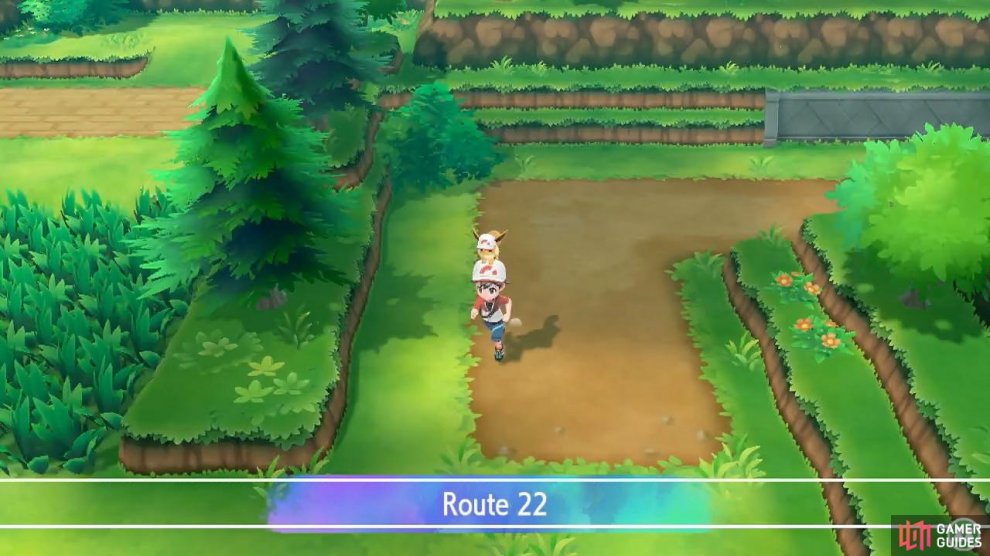 New players might be slightly surprised at the big jump from Route 1 to Route 22. Where did the other 20 routes go? Don’t worry, as we’ll be visiting the rest very soon! This route is technically the final route in the game, leading to Victory Road and the Pokémon League–your final destination. However, you can’t pass until you have all 8 Gym badges.

That said, you can still explore this short route to catch new Pokémon etc. As you enter, there will be a patch of tall grass just around the corner. Head through the tall grass and go up towards the path leading west. Continue up past the path, then slowly approach the bush to the left. If you search carefully with your partner’s help, you can find an Antidote.

In addition to the items you can clearly see on the floor, which are in the shape of a Poké Ball, there are also many items that are invisible to the naked eye. Previously, you needed the Item Finder to locate such elusive objects, but you don’t need that anymore. Instead, pay attention to your partner’s tail–if it shakes wildly, it means a hidden item is nearby.

Go back down and follow the path west. Before you can get very far, your rival will come in from behind and challenge you to another battle. Whoa, is he ready for another beating this soon? 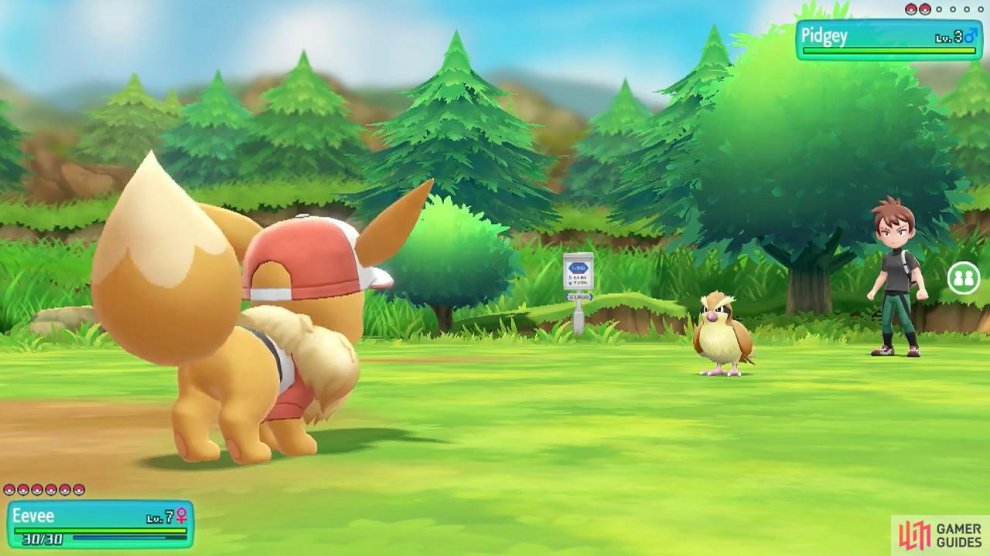 Your rival has picked up a Pidgey from the nearby area. But it seems he didn’t have time to train it, since it’s at a low Level 3. If your partner is Pikachu, Pidgey should go down in seconds after a Thunder Shock or two. Otherwise, Eevee can still cause a lot of damage and most other Pokémon should be fine, as long as they aren’t Grass-types.

As for your rival’s starter Pokémon, you can deal with it in the same way as during your debut battle in Oak’s Lab. Because one more Level isn’t going to make a huge difference at this point in time. Obviously, if he’s using Pikachu, you should keep your Pidgey and Spearow away.

Having shown your rival who’s boss, he’ll scoot off, so you can continue exploring. Further west, jump down the ledge to reach more tall grass. From here, you can head west to reach the gatehouse to Victory Road, but as mentioned, you won’t be able to proceed. Once you’re done, jump off the ledge again and grab the 5 Poké Balls by the corner.

Like Pidgey, Spearow is more early-game fodder. You should still catch it just to increase your Pokédex entries. You can also find Nidoran (male) and Nidoran (female). These are a fair improvement, as they can eventually evolve into the formidable Nidoking and Nidoqueen, respectively, gaining the useful Ground-type.