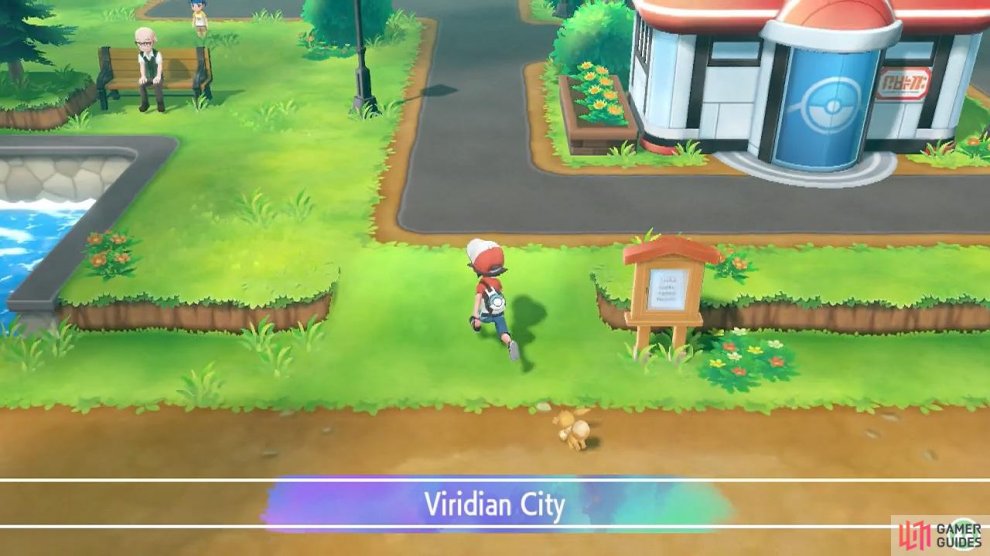 This pleasant city is home to a Pokémon Gym, but it'll be the last one you challenge, rather than the first. As you arrive from Route 1, there will be a building with a red roof directly ahead--this is a Pokémon Centre, which you can visit to restore your Pokémon buddies back to full health. The people inside may also give you tips or offer to trade Pokémon.

If you need to, go and heal your Pokémon. Either way, go past the Pokémon Centre towards the east to find a building with a blue roof this time--this is a Poké Mart, which sells a variety of useful items. In particular, if you feel like you're running low on Poké Balls, don't hesitate to buy a bunch. You never know when you might need them!

As you approach the Poké Mart though, a clerk standing outside will fob a Parcel onto you. Since when did you look like a deliveryman? This parcel is apparently for Professor Oak, so you'll have to backtrack a little. Fortunately, the game makes it easy for you, by giving you the option to head straight to Oak's lab here and there. You might as well do it.

Back at the lab, go over and deliver the goods to the Professor, who doesn't seem to have moved an inch since you last saw him. Your rival will also come to crash the party. You will receive Razz Berries, which--as you should know--increase the chance of catching Pokémon. When you're ready, proceed south to battle your rival. 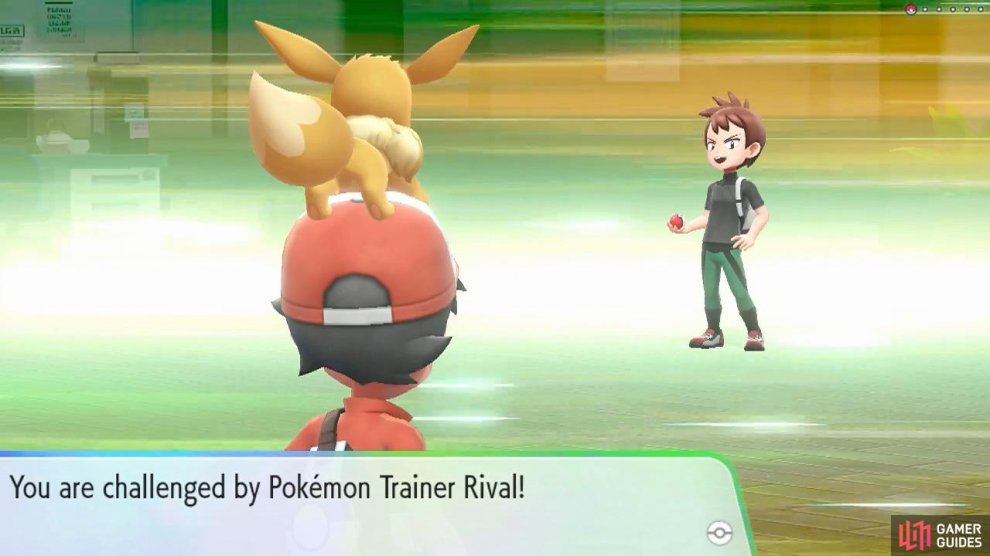 In the original Kanto games, you battled your rival immediately after choosing your starter Pokémon. But this time, you have a little leeway. Still, the concept is the same: you'll face your rival's starter Pokémon, which--if you remember--is Eevee in Let's Go Pikachu and Pikachu in Let's Go Eevee.

For this battle, you don't really to think much. Veteran trainers may know that Pikachu and Eevee are both neutral towards each other, in terms of their Types (Electric and Normal). In other words, they neither have an advantage or disadvantage against each other. So in theory, both you and your rival are battling on equal footing.

Except, stat-wise, your own starter Pokémon is way more stronger than his--or any Eevee/Pikachu you'll find the wild. So you can easily win this battle just by spamming an attack move: Thunder Shock for Pikachu or Tackle (or Quick Attack) for Eevee. Nevermind you can potentially use up to 6 Pokémon, which you recently caught, against him!

Once you've shamed your rival, exit the lab and make your way back to Viridian City via Route 1.

Around this time, the "Communications" function in the main menu will become unlocked. From here, you can access Mystery Gifts and play with other Let's Go players, both locally and online. That means, you can now trade and battle Pokémon with others!

This also means something else. If you bought a brand new Poké Ball Plus, you can now receive your Mythical Pokémon Mew. To do this, go to Mystery Gift, then choose the option to receive via the Poké Ball Plus. Your Mew will be sent to your box and you can add it to your party afterwards.

You can only receive Mew from a particular Poké Ball Plus once. So be very, very careful with your Mew. If you start a new save file, you cannot receive another Mew from the same Poké Ball Plus. Unfortunately for hardcore trainers, it's impossible to reset for Mew's Nature as well. 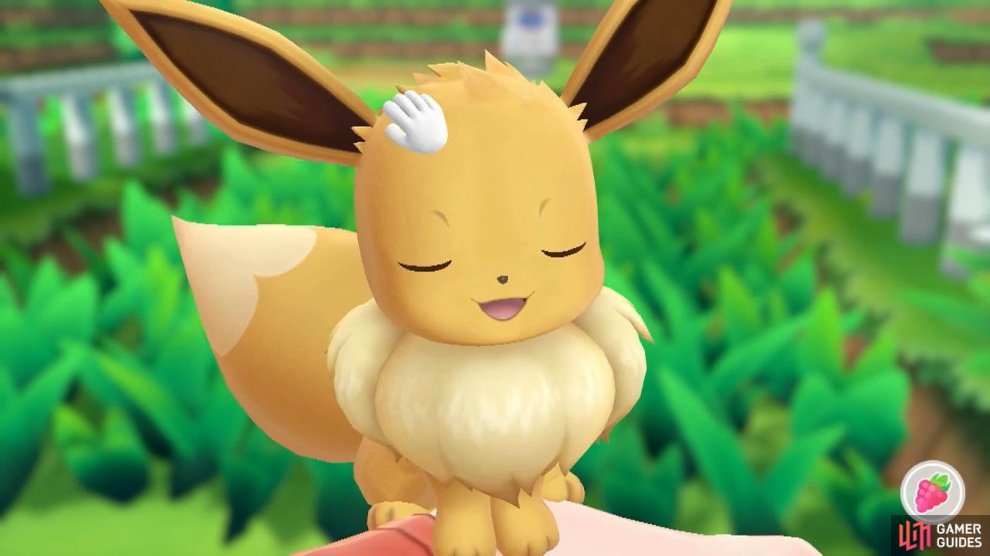 As you approach the entrance to Route 1, you'll be stopped by your rival's sister. She'll give you Sportswear for your partner Pokémon to wear, so you can both have matching outfits. You can access this--and other fashion items--by opening the main menu, going to "Bag" and selecting your Clothing Trunk.

Before you can do anything though, the game will throw you into the "Partner Play" mode. For those who have played previous Pokémon games, this is essentially Pokémon Amie or Pokémon Refresh, but only for your partner Pikachu or Eevee. Here, you can pet your partner and feed it berries to increase its affection towards you.

Instead of using the touch screen like in the Nintendo 3DS games, you use your joy-con controllers or Poké Ball Plus like a pointer. Press the A button (or ZR/R buttons) to stroke your furry friend or grab a berry. If you lose sight of the cursor or the cursor is somewhere awkward, press the Y button to centre it.

If using the Poké Ball Plus, you can only reset the cursor by backing out with the B button and restarting Partner Play. Meanwhile, if playing in Handheld mode, ignore everything we said, as you can actually use the touch screen to do everything, just like in the previous games! Now wouldn't that have been useful for catching Pokémon?

When you want to access Partner Play by your own volition, open the main menu and select the giant "Play with Pikachu/Eevee" option along the top. If you have the Poké Ball Plus, you can also shake your controller when outside to get straight there.

Besides getting an overdose of cuteness, there is an actual point to caring for your partner Pikachu or Eevee. As you build up their affection, your partner will receive random effects during battle, including increased critical hit chance, a chance of recovering from a status condition or surviving with 1 HP.

As you reach the end of Route 1, you'll be stopped by the little kid standing near the exit. If you spoke to him earlier, he said he'd love to battle you once he found his Pokémon. Well, guess what, that time has now come! 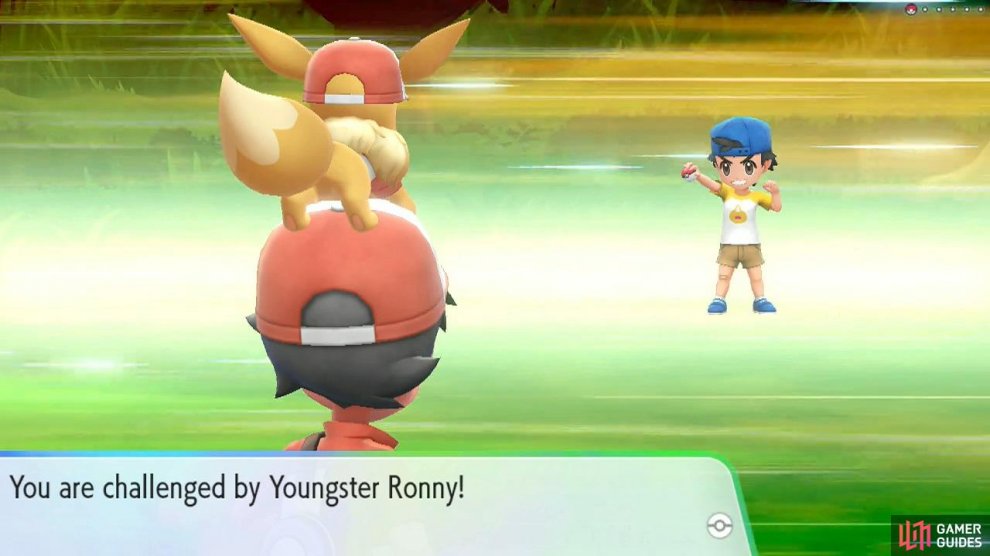 After your battle with your rival, this battle should be a piece of cake. Rattata is a fairly weak critter and it's 3 Levels lower than the Eevee or Pikachu that you fought. Send it flying with your trusty partner or if you're feeling resourceful you could consider fighting with your other Pokémon, to give them more experience points.

Back at Viridian City

Once you're back in Viridian City, if you haven't already done so, we suggest popping in to the local Poké Mart to replenish your supplies. In particular, since this game heavily encourages catching Pokémon, you can't go wrong with more Poké Balls. Potions could also be useful. Otherwise, there's not a lot to see here.

There is a Pokémon Gym towards the north-east, but it's currently abandoned and won't be accessible until near the very of the game, after you visited most of the Kanto region. Instead, you can go west to Route 22 or north to Route 2 and Viridian Forest. To progress, you'll have to go north, but for now, let's take a detour to Route 22.