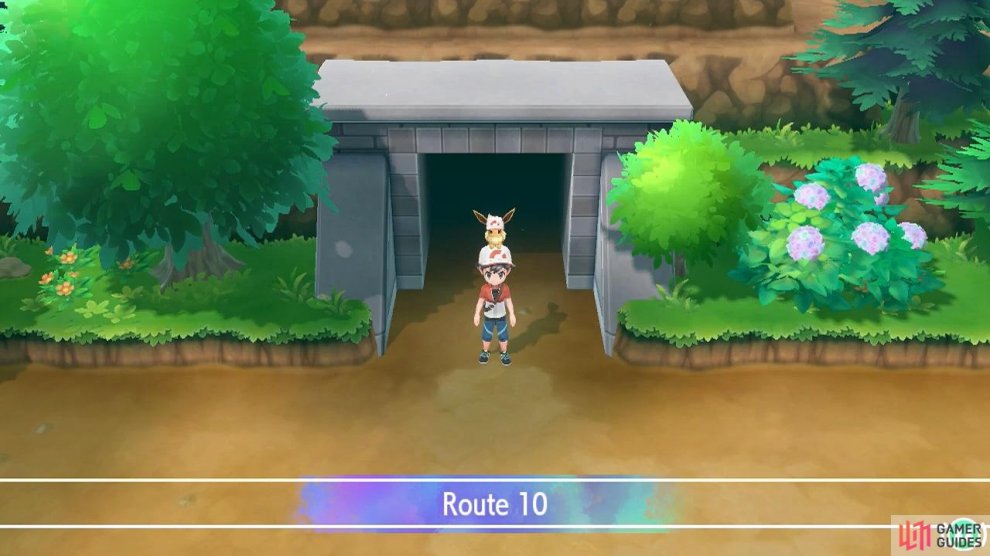 Exiting Rock Tunnel via the south will take you to the bottom half of Route 10. Here, there are a couple of more trainers before the next town. If your party is already exhausted, don't worry as there's not much further to go and you can avoid all the trainers if you're smart.

Anyway, if you want to battle a Hiker, head left. Once he's defeated, you can grab 3 Great Balls below him. Also, you can jump over the ledge below to get to Lavender Town quicker, but you will need to fight a Poké Maniac.

Nothing too surprising here. We're going to assume you already have a Rock-type counter ready. Whether it be a Water, Grass, Ground or Fighting-type. Or maybe even a partner Eevee that can blow really big and bouncy bubbles.

Otherwise, head right. Around here, there's a Picnicker standing by a ledge. Go up from her and search around the flowers near the corner for a hidden stash of 5 Nanab Berries. Then battle the Picnicker or avoid her by jumping over the ledge to her right.

You beat Lt. Surge, so a Pikachu should be easy mode for you. This one does know Thunderbolt, so don't underestimate it. Meanwhile Pidgeotto is best handled with Electric or Rock-types.

Below, there's a Camper who's also standing guarding. Likewise, you can fight him or jump over the ledge on his left. Note that if you want to head back into the Rock Tunnel, you will need to eventually fight these two trainers.

Against Trent, a Grass-type Pokémon would be really useful, since both of his Pokémon are susceptible to Grass. Otherwise, you can also send an Electric-type against Krabby, then switch in a Water or maybe Flying-type to deal with Sandslash.

Finally, further south is the entrance to Lavender Town. If you carry on west though, you can battle a Poké Maniac near the far corner. By the way, if you fought the Hiker near the start and jumped over the ledge below him, you'll also end up over in this corner.

Damian has an evolved Charmander. It's still a Fire-type though, so the usual weaknesses apply: Water, Rock and Ground. This one does have Dragon Rage, which does 40 fixed damage. Be careful if your Pokémon have low HP!