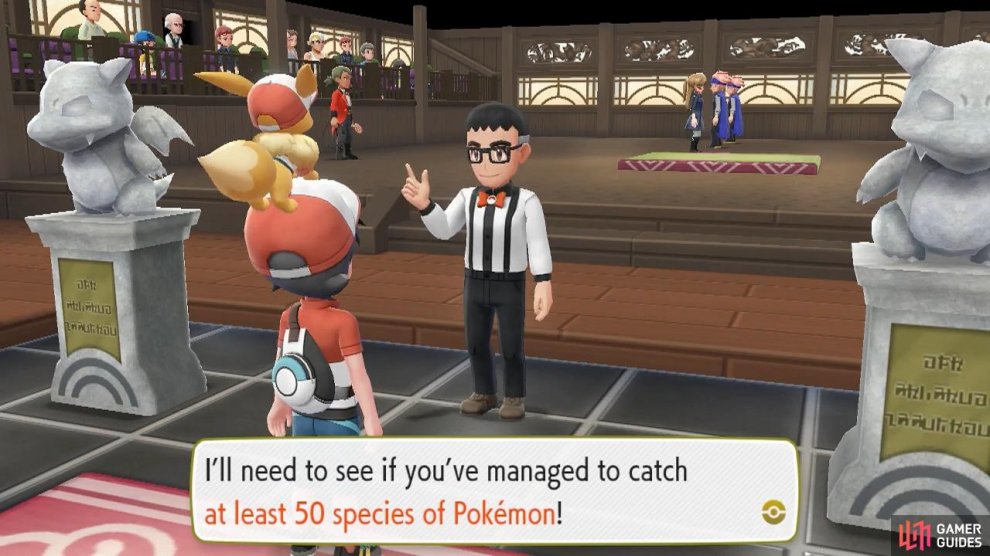 To enter the Fuchsia City Gym, you'll need to have registered 50 Pokémon species in your Pokédex. We really hope you've been catching and evolving a lot of Pokémon during your journey! If you're missing a few, don't worry; head back out and have a good look around. But if you're missing lots, you may want to borrow Pokémon from Pokémon GO.

Poison-type Pokémon are generally weak to Ground and Psychic. They're strong against Grass and Fairy, and they resist Grass, Fighting, Poison, Bug and Fairy. Also, Poison-types cannot be poisoned. If in doubt, Steel-types are completely immune to Poison-type moves.

Anyway, this Gym is infamous for its invisible maze. If you stop and focus on the mists, you should be able to see the outline of the maze, but barely. In any case, go up the steps from the entrance, into the maze. Koga is directly in front of you, but obvious you can't reach him this fast! Go east. There should be trainer with a red tailcoat ahead.

If you want, you can go past him on his right. Otherwise, let him have it!

Aww, Phil has the middle evolved forms of male and female Nidoran. Both have Toxic to cause Poison that gets increasingly strong as time goes by. Nidorina also has Crunch to target Psychics, while Nidorino has a mean Poison Jab. Go with Ground or Psychic, or Steel to wall them.

Past the Tamer, head north while sticking towards the edge of the Gym. When you reach the next trainer--an Ace Trainer, go west below him and then north, straight into his field of vision. We tried, but he seems to be the only trainer you can't sneak past.

Muk has an annoying combination of Toxic, Minimize to boost evasion, and Protect to stall. It also knows the Fairy-type Moonblast for reasons we can't fathom. As usual, Ground and Psychic are great for their super-effective damage, while Steel Pokémon can shrug off all its attacks.

Beedrill is a fully evolved Weedle. Like its previous forms, it's weak to Fire, Rock, Flying and Psychic. This gigantic bee can also use Protect, to waste time, which can kill if you've been hit by Toxic. It also knows the Dragon-type Outrage, which is neat, we suppose?

Go north from Kayden towards the northern-most part of the Gym. Follow the invisible path west. When you reach the corner, go right a bit, then down to the next row. Towards the right, there's a Juggler looking left. If you slowly inch right, then move down at the earliest opportunity, you can just about avoid his gaze. 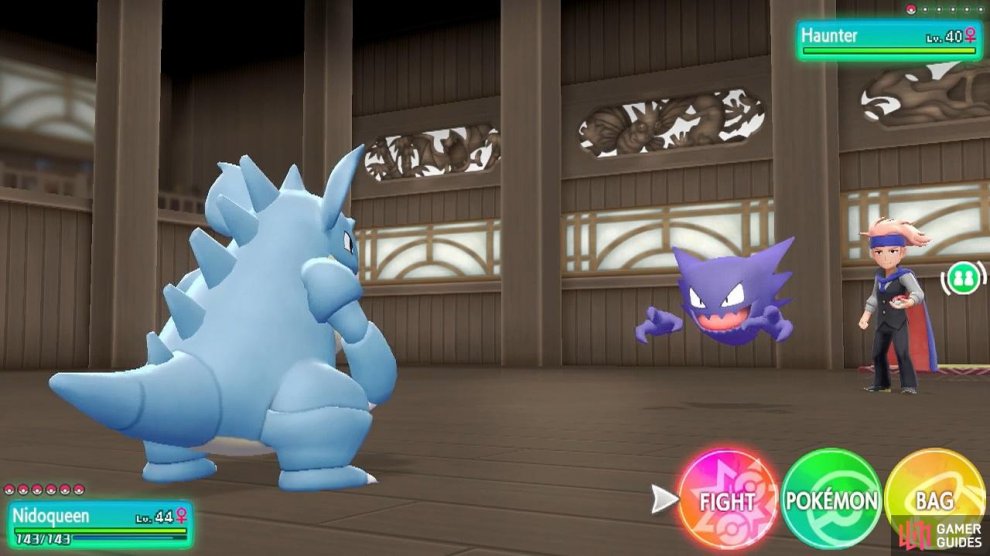 This Haunter is a bit different to the usual ones; it can use the dreaded Toxic and Protect combination to quickly whittle down your HP. If that doesn't work, it can fight with a STAB-boosted Shadow Ball. Ground or Dark-types are recommended, or Steel if you hate Toxic.

Past Kirk, there's another Juggler below him. If you want to fight him, just keep going down until he sees you. After you've beaten this second Juggler, you can continue further down.

Harry must have been first in the queue when they were handing out Haunter, as he has three. His first Haunter packs Toxic, Shadow Ball and Sucker Punch. His second Haunter is the same, but also has Protect for stalling. Finally, number three has Protect, Shadow Ball and Dark Pulse.

Since this is a longer battle, there's a higher chance of being hit by Toxic, then being stalled by the second and third Haunter. If you don't think you can one-shot Haunter, then you may want to field a Steel-type, or a Poison-type with a non-weak second Type, like Water or Flying.

Otherwise, if you're avoiding battles, go left between the two Jugglers. When you reach the edge of the Gym, step a few paces right, then go down. After that, go left back towards the edge, then keep going down until you hit an invisible wall. You might be able to see the head of a Tamer nearby below. Go right a little.

If you came from battling Juggler Harry, you should arrive here as well. Now, if you want to battle another trainer, head right, then up and right towards the female Ace Trainer. After battling her, go back to where you can see the Tamer's head.

Annie's Ivysaur only knows Solar Beam--a powerful Grass-type move that requires a turn to charge. Hit it hard with super-effective Fire, Flying, Ice or Psychic moves. Her Weezing has moves that hurt Steel and Psychic-types, but Psychic-types should be fine if they're healthy.

Regardless, go down until you're just above the Tamer's field of view. If you're in a battling mood, go in front of him to catch his attention. Afterwards, go a short distance down, then right towards where Koga is waiting.

So that's where all the Gym's Arbok went... In Edgar's possession. All three Arbok seem to be the same. They can use Glare to inflict Paralyse, then Poison Jab to cause pain. The standard counters apply here, so Ground, Psychic or Steel.

If you want to avoid the Tamer, go left, above him. Then go down, while following the edge of the Gym. However, don't go down all the way or you'll reach a ledge that leads back to the entrance. Instead, once you've gone past the Tamer, go right. You should reach Koga. 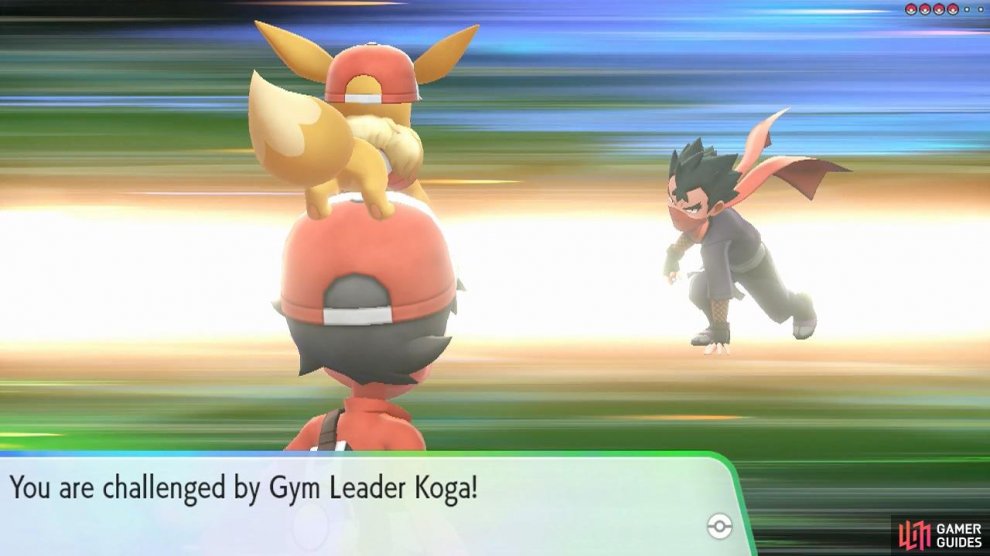 All of Koga's Poison-types carry Protect, while can only mean one thing. Toxic stalling. Indeed, besides Venomoth, all his Pokémon can use Toxic. If you want to avoid Toxic, Steel-types are ideal. If you have Poison-types with a beneficial second Type, like Ground, they can be useful as well.

Weezing can use Sludge Bomb and Explosion in addition to Protect and Toxic. Explosion is a stronger version of Self-Destruction, dealing lots of damage, but KOing Weezing in the process. Ground or Psychic-types are great offensive choices, while Steel is good for defence.

Next can be Venomoth, which can use STAB-boosted Bug Buzz and Sludge Bomb, plus Psychic to hurt other Poison-types trying to wall it. Fire, Flying, Psychic and Rock-types are great here. Steel and Poison are less useful since Venomoth can't inflict Toxic.

Koga also has a Golbat. In addition to the two signature moves, it can use Fly to disappear for a turn, before dealing damage on the next. Plus Leech Life, which is a strong Bug-type move that steals HP. Electric, Rock and Ice are recommended for attacking with, Steel and Poison to negate Toxic.

Finally, Koga's Muk can use a STAB-boosted Sludge Bomb, plus Moonblast to, er, be a hipster or something? We're honestly out of ideas. Again, go with Ground or Psychic for offence, or Steel or Poison for defence. If you haven't figured it out, the fully evolved Nidoran are really good choices.

Neutralise Koga's poison and he'll give you his Soul Badge, plus his family heirloom, TM27 Toxic. If you haven't experienced it before, Toxic inflicts a special type of Poison that gets worse and worse as time goes on. In fact, if untreated, a Pokémon at full HP will be reduced to 1/16 HP when Turn 5 begins and will faint on Turn 6.