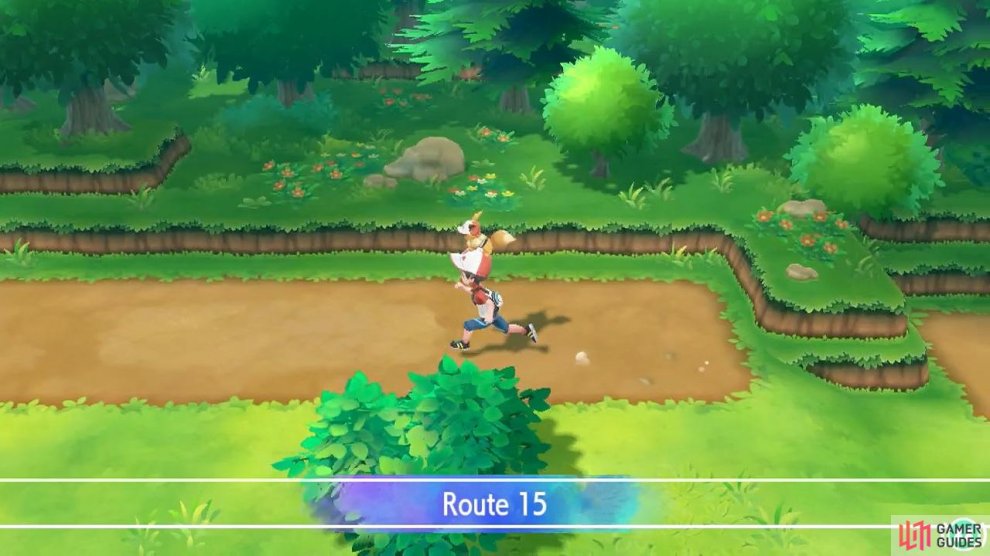 Hopefully you came prepared and you've still got lots of potions to heal your Pokémon's HP. But if their PP is getting low, don't hesitate to break out those Ethers and Elixirs. If you're not going to use them now, you're unlikely to use them later.

Anyway, there are two paths on this route: a higher one, accessible by cutting down a skinny tree near the end of Route 14, and a lower one that doesn't require any effort at all. We'll be going along the higher one first. For reference, there's less going on up there, so if you need to get to Fuchsia City ASAP, go that way.

As you arrive from Route 14, keep heading west. About halfway along the higher path, there's a Coach Trainer staring up.

Midge's Machoke can use Brick Break for STAB, and Fire Punch to hurt Grass, Ice and Bug-types. However, it's got nothing to counter the Flying, Psychic or Fairy-types that beat it.

Meanwhile, her Magmar also has Fire Punch--this time received a boost from STAB--and Low Kick to damage Rock-types. Stick with Water-types or Ground-types and it should be plain sailing.

Next, continue west. We recommend hugging the very top of the route or staying somewhat near the top of the ledge below. Although be careful not to accidentally jump off the ledge. Towards the far end, there's a Picnicker who is slowly looking in all four directions. When she's looking right, she can catch you off guard.

Tangela is the only pure Grass-type in the Kanto region. In addition to Fire, Flying and Ice, Poison and Bug are also effective. Yazmin's Tangela can use Stun Spore to inflict Paralysis and Mega Drain to absorb HP from its foe. Limit the potential damage by fielding a super-effective Pokémon.

Next is Seaking, an evolved Goldeen. This one can use Waterfall, which is a pretty strong Water-type physical move. It can also use Agility to boost its Speed. If allowed to get a Speed boost, it can cause a flinch with Waterfall. Again, try to KO it fast, ideally with Grass or Electric-types.

Past Yazmin, you can find TM47 Surf. Originally it was a HM or Hidden Machine used to travel across water, but it's been replaced by the Sea Skim Secret Technique. In battle, it's largely outclassed by Scald, which is slightly weaker, but can cause Burn. However it can be useful during Double Battles, since it hits all targets (including your ally, so watch out).

From here, you can jump down the ledge below and you'll find the gatehouse to Fuchsia City immediately to the left. Otherwise, if you want to keep looking around, run back towards the start of Route 15 via the higher path. Then start heading west along the lower path.

Near the start, there's an item just below the really, really long ledge. Pick it up to find 3 Ultra Balls. Hey, that's not a bad find! To the left is a Punk Guy adamantly starting down. You can battle him or go through the tall grass above him. 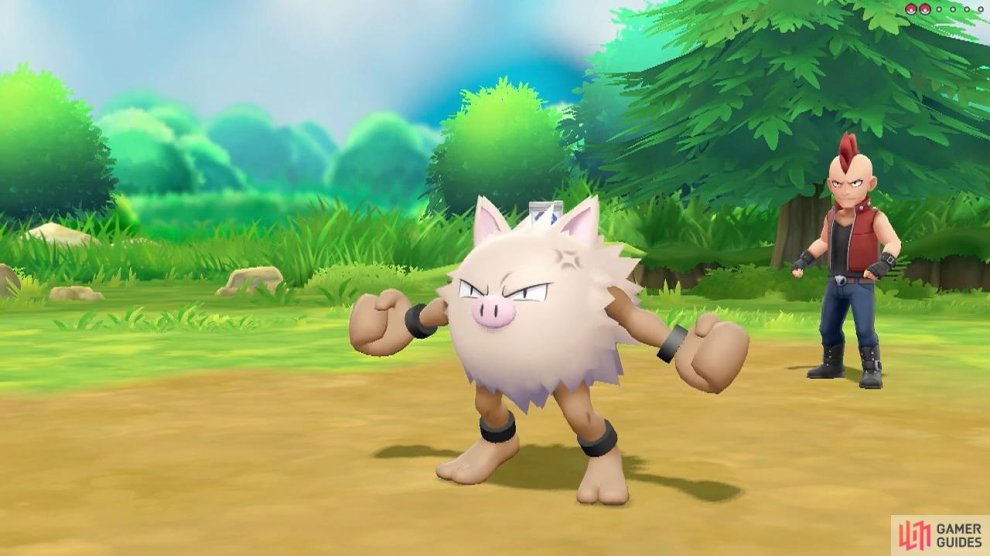 A reliable Psychic-type is perfect here. Ernest's Primeape does have U-Turn, which is strong against Psychics, but it shouldn't cause too much damage. Plus it will cause Primeape to pivot out. Meanwhile his Muk has Toxic and also Acid Armor to greatly boost Defence. If in doubt, use special attacks.

Past Ernest is another Punk Guy doing the exact same thing. So, again, feel free to walk past above him, if fighting's not your thing.

Again, this can be a job for a Poison-type, although Ground-types work just as well. Alex's Arbok can use Glare to cause Paralyse. So don't mess around and slam it hard with your best super-effective moves.

Continue west from Alex. After the first patch of tall grass, there will be a second patch of grass. Then, to the left, between the second patch of grass and a lonesome bush, is a Hyper Potion that's all yours. Past the bush, be wary of a Beauty standing near the bottom. You can avoid her if you hug the bottom of the above ledge.

This lady sure loves her dogs! Well, they are a man's best friend. All of them have the same moveset: STAB Heat Wave, Dark-type Crunch, Dragon-type Outrage and Fairy-type Play Rough. None of these should hurt your super-effective Water, Ground or Rock-types though.

Further west is a third patch of tall grass. Search the middle for a hidden Golden Nanab Berry. At the end of this patch of grass, there's a Bird Keeper standing near the bottom. Like the Beauty from before, he can be avoided if you keep north.

This Dodrio can use Thrash, a powerful Normal-type move that causes the user to be confused eventually, the Flying-type Drill Peck and Jump Kick to annoy Ice, Rock and Steel-types. Electric-types are the safest choice here, but it's only one Pokémon (despite having three heads), so not too dangerous.

Past Edwin, there's a bush followed by the fourth and final patch of tall grass. At the end of the path is the gatehouse to Fuchsia City. You finally made it! Inside the gatehouse, go upstairs via the stairs in the south-east corner. If you've collected 50 Pokémon species, the assistant to the right will give you an Assistant Set.

Previously, the same assistant gave you Exp. All or Exp. Share. However, you already have Exp. Share by default--and in fact, you can't get rid of it. Wait, did you steal the Exp. Share from him before the game started? Anyway, exit the gatehouse to the west. You'll be back on Route 15. Continue onwards a short distance and you'll reach the next city.

Exactly the same Pokémon as Route 14. We'll let you decide which route is better for catching Pokémon. Personally, we think Route 14 is nice since you can easily see all of the grass at once. That said, slightly more Pokémon can spawn on Route 15. Choices, choices.