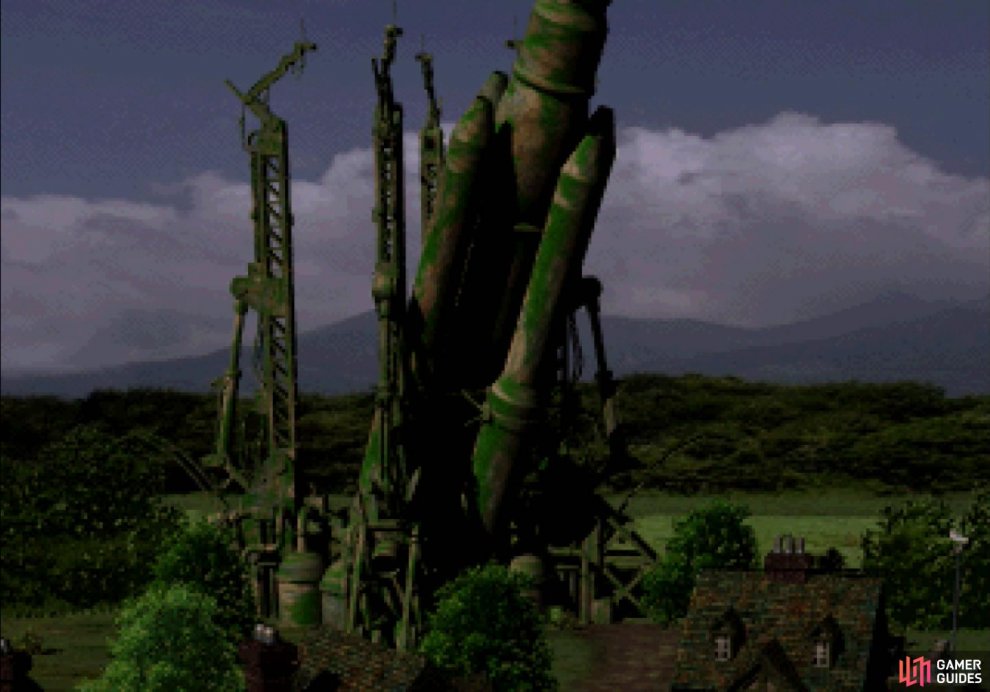 Finally, leaving the past behind us… once you’re back on the world map head west around some mountains to the north, then turn north-east to find a town built around a leaning rocket. Well, if our world can have a leaning tower, why not a leaning rocket? Enter the town and Cloud will gawk at the structure. Ooooh. Afterwards, you’ll note that you’re standing between two buildings, an inn to the east, where you can learn about the "Captain", and a weapon shop to the west. The latter sells a few interesting things, including a new weapon for Vincent (48 Attack, two pairs of joined Materia sockets), Gold Armlets (which you could have stolen from Dragons in Mt. Nibel), and some expensive accessories. Don’t spend money on Gold Armlets, however tempting they might seem. You’ll be able to buy superior armor soon.

North of these two buildings is an item shop, which also sells two new bits of Materia; Barrier and Exit. Barrier is patently inferior to "Big Guard", but if you want some super over-powered Materia later on, you’ll ensure you have at least one of each type. Outside of the item shop is an old man, who likes to talk about the rocket… almost literally in his backyard. Talk to him twice and agree to look at the rocket with him and he’ll give you the Yoshiyuki , a sword for Cloud with 56 Attack, two unjoined Materia sockets, and the special property of dealing more damage when you have KO’d allies in your party.

Ignore the house to the west, as it just contains two chronically bored adults. Instead, there are two houses to the east, one closer to the rocket, and one along the eastern edge of town, past the inn. Go into the latter, first, and search the back room for a chest containing a Power Source . Once that’s yours, head into the house to the north and loot a chest in a small room to the north-east to score a Drill Arm . This is a 37 Attack weapon for Barret with four unconnected Materia sockets and Double AP Growth. It’s also one of those weird melee weapons.

Last Flight of the Tiny Bronco

Head down the nearby hallway and go through a door to reach this house’s backyard, where you’ll spot an apparently operational monoplane; the Tiny Bronco. Before anybody’s minds turn to larceny, a lady shows up and refers you to the Captain, who apparently is banging around in that old rocket outside of town. She also tells us about a surprising visitor the Captain is expecting…

Note (Fort Condor Battle #7): Time for another really, really annoying Fort Condor fight that springs up at a silly time. You can start this one after checking out the Tiny Bronco, but before finishing up Rocket Town, which is a fairly small window of opportunity. Worse still, you have to walk all the way through Mt. Nibel, drive the buggy back to Costa del Sol, and then hitch a ride to Junon… and of course some back again when you’re done. Less annoying than having to miss a scripted event, but still a chore. Your reward? If you’ve been finishing all the battles to this point, you should receive a Superball for winning (68 Attack, no Materia sockets).

Leave the house and make your way north to the rocket, crossing platforms over wires and pipes, heading up stairs, and climbing ladders to reach the rusty monstrosity. Inside the rocket you’ll find the Captain, who will tell you about the rocket, about Rufus’s visit, and most importantly, about your usage rights concerning the Tiny Bronco. In the first case, you’ll have to leave the rocket and return to get the Captain (who will be known by his default name, Cid) to stop moping.

Dejected, return to the Captain’s house, where inside Shera will ask about your encounter before Cid returns home and raises hell. Poor woman… After Cid civilly sits you down or a cup of tea he’ll head out back, and Shera will tell you about her and Cid’s back story. After the story, Cid will return to the house, followed shortly by Palmer, the head of Shinra’s space program. Follow Cid out front and witness his confrontation with Rufus, after which Shera will call you back and pick the lesser of two evils. Make your way to the backyard and confront Palmer, who is less of a push-over now than he was back in the Shinra Headquarters.

Compared to Lost Number, this guy is cake. Palmer has one attack - his Mako Gun - which must be the source of his new-found confidence. Granted, it’ll do nearly 400 damage a shot, but that’s nothing too special anymore. Just pummel him with whatever means you have available, and if you bother using old fallbacks like "Big Guard" and "White Wind" he won’t stand a chance. Once he’s been bruised up a bit, he’ll have a close encounter with the Tiny Bronco, before fleeing. Unfortunately he spends a bit too much time taunting, and not enough time looking both ways before crossing the street…

Fortunately for the good guys, the Tiny Bronco is apparently VTOL-capable, and doesn’t need a pilot to get going. Unfortunately, the Shinra troops accompanying Rufus are some of the only ones who know how to aim. After the plane takes a dive, the foursome will chat. Cid, resigned to losing even the air after coming so close to space, allows you to use the Tiny Bronco as you wish, and even elects to follow you around… for whatever reason. He’ll also tell his fellow numbskulls that Sephiroth was heading to the Temple of the Ancients.