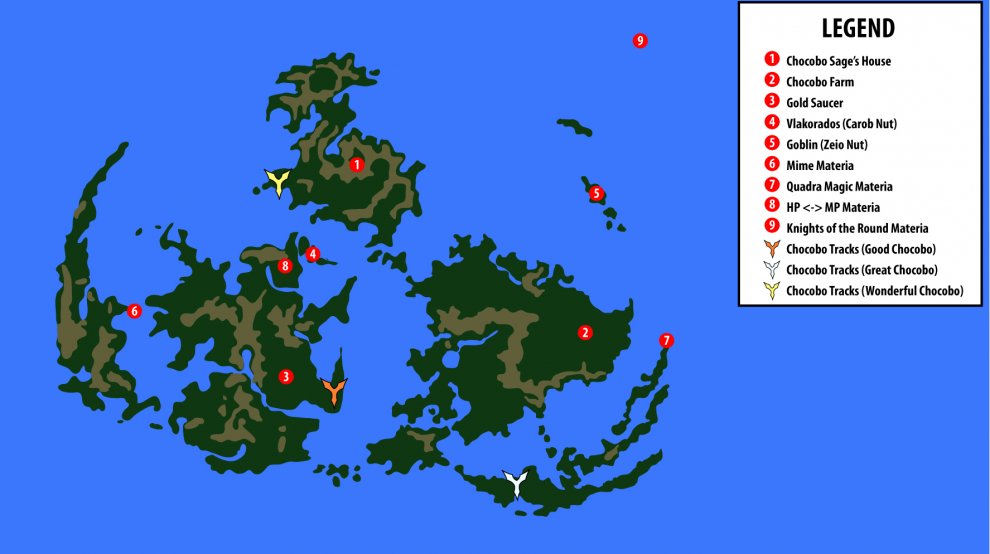 Chocobos! Everybody loves them. And why not? They’re adorable. Even if you’ve got a heart of stone (or a severe case of Alektorophobia), Chocobos are the key to getting some of the best, most game-breaking Materia in the game. This section is dedicated to the art of Chocobo breeding, although it can also be found in the walkthrough, some folks might want the information presented separately, free from the constraints of its position in the walkthrough.

Before elaborating on the minutiae of breeding yourself multi-colored birds, however, there are some progression and resource details to be aware of:

Got it? Good, with that out of the way, let's discuss all the steps you'll need to take in order.

The Chocobo Sage contains MOST of the information you need to do all the breeding yourself, albeit without so many fine details. Visiting him isn’t really necessary to breed Chocobos, except for the fact that you’re probably going to want to pick up Sylkis Greens (at 5,000 Gil a pop, that’s where most of your money is going to go!), not to mention the Enemy Skill Materia you can get from talking to the Green Chocobo kept there. Meet with the forgetful old sage to glean snippets of knowledge from him and buy greens, as needed.

Talk to the Chocobo Sage to learn about breeding epic birds, and to buy high-quality Greens (left). Make sure to buy some stables to house your captured Chocobos! (right)

Before you go Chocobo-catching, you’ll need a place for your birds to go. After the events at the North Cave, the old man at the Chocobo Ranch will be finally willing to rent out stables… for the low, low price of 10,000 Gil each. Six stables will cost 60,000 Gil, which is expensive, but nowhere near the price of Sylkis Greens. Rent out all six, and you’ll be good to go!

There are a few more things that should be pointed out while you’re here, however. Talk to Choco Billy and he’ll tell you about raising the birds. Simply put, you’ve got to catch them, send them to the corral, put the ones you want to breed in the stables, raise their stats by feeding them Greens, improve their stock by racing them (because Chocobos are apparently the only critters that actually follow the rules of Lamarckian Evolution) then feed them the right Nut to breed them. If you get the right Chocobos, feed them the right Greens and Nuts, improve them enough through racing, and have a bit of luck, you might just get a rare type of Chocobo that can cross various terrains! On the other hand, his sister Chole will record the info you get from the Chocobo Sage and relate it to you on request. She’ll also compare the abilities of your Chocobos and tell you which ones are best, although without much detail this is only so useful…

Note: Outside of the Chocobo corral at the Chocobo Ranch you can find a piece of Chocobo Materia just lying on the ground, waiting for you to pick it up. It’s on the bottom right of the screen, below the corral. It won’t appear until later in the game, so don’t expect this freebie on your first visit. It should be there by disc 2, however.

You can score some Chocobo Lure Materia if you return to the Chocobo Farm in disc 2 (left). Quickly kill the enemies traveling with a Chocobo to capture it!

Now that you’ve got six stables, some info, and perhaps a new chunk of Chocobo Materia, it’s time to go hunt some birds! You should already know (from the encounter with Midgar Zolom) the basic principles involved, but this section is all about redundancy, so recapping makes sense. Simply put, equip some Chocobo Materia (the higher level, the better your odds of encountering a Chocobo) and find some Chocobo tracks on the world map. Run around along those tracks and you should eventually encounter a Chocobo along with some normal monsters that inhabit the area. You’ll need to kill the monsters and spare the Chocobo, after which you’ll capture the Chocobo. They’re skittish critters, though, and will flee shortly if they’re not placated with greens (cheap Gysahl Greens work fine), but hopefully by disc 2 you’ll be able to kill most monsters they travel with before they flee without bothering with greens.

So, that’s how it’s done, but there’s more to it than just grabbing any old Chocobo in the wild; you’re after high-quality Chocobos to serve as breeding stock. The dormant genes of great, colored birds of yore lie dormant in various Chocobo populations, and you’ll need to hunt those birds down, specifically! There are two grades of Chocobo you can hunt down, which dwell in different areas; “Good” and “Great” Chocobos, as graded by Choco Billy. Normally you wouldn’t know the quality of the Chocobos you catch until you returned to the stable and went to move - or release - them, but it turns out high-quality Chocobos only travel with certain monsters. Biased birds.

Good Chocobos travel with Spencers near the Gold Saucer (left) and Great Chocobos can be found in the company of Spirals near Mideel (right).

Knowing that, you can find Good Chocobos east of the Gold Saucer (south of a sandy peninsula), while Great Chocobos inhabit the lands west of Mideel. In the former case, Good Chocobos only travel with Spencer enemies (little green fish monsters) while Great Chocobos keep the company of Spirals (gray reptilian-pillbug foes). Any combination of the two works; the enemies near the Gold Saucer are easier to kill quickly, but you’ll often find yourself fighting Joker enemies, who can one-hit-kill characters regardless of strength. Meanwhile, the foes near Mideel might be sturdier, but they’re also more lucrative. Capture six of either (or mix and match) then return to the Chocobo Ranch and move four Chocobos - two males and two females - into your stables. With any luck, you’ve caught most of the birds you’ll need to!