This activity can be acquired from the Vagabond who can be found in the Rattay refugee camp. He claims that a guard named Pazdera has stolen 100 Groschen from him, and that if you get it back for him he will reward you with half of it. His story sounds dubious, but have no fear if you do not want to steal from a guard; you can choose to give him 50 Groschen of your own instead.

Once you have either robbed the guard or given 50 of your own Groschen, the Vagabond will ask you to steal from a rich townswoman. If you have no quarms with thieving then the job can be done easy enough, but you should take note of where the woman walks. It will not always be easy to find her in a place without guards. If you do not want to risk it during the day, you can wait until after midnight, when the woman can be found sleeping in her house. 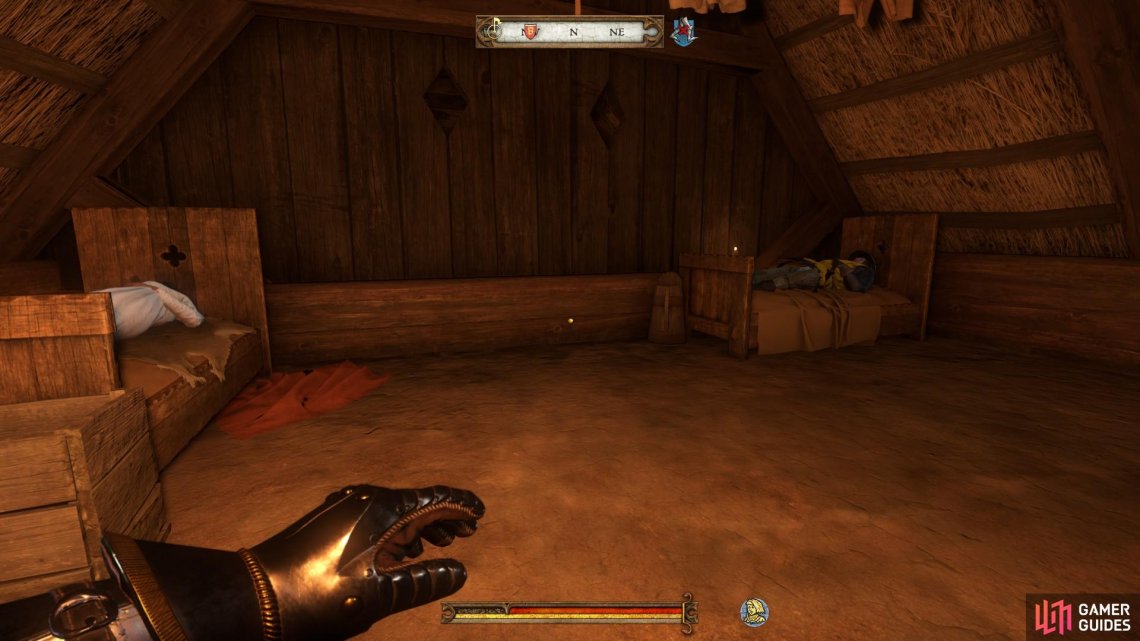 The rich woman can be found sleeping in her house, but be wary of the guard who sleeps in the same room.

If you choose to steal from her during the night, you should remove any items with high noise ratings. You can then attempt to pickpocket without waking her up, but the safest method is to knock her out first and then loot her body.

Note: If you continue to pickpocket the people of Rattay, your reputation will decrease. You must therefore decide between a cash reward by stealing, or a reputational boon by providing the Vagabond with your own money in each case.

Whatever your decision, speak with the Vagabond again when you have the money. The next phase in the activity chain requires you to steal not money, but an item in the form of a family ring, from the wealthy merchant Wolfram Pruda. He likes to spend most of his time wandering around Rattay, but if you wait until after midnight you will find him sleeping in his house opposite the weaponsmith. 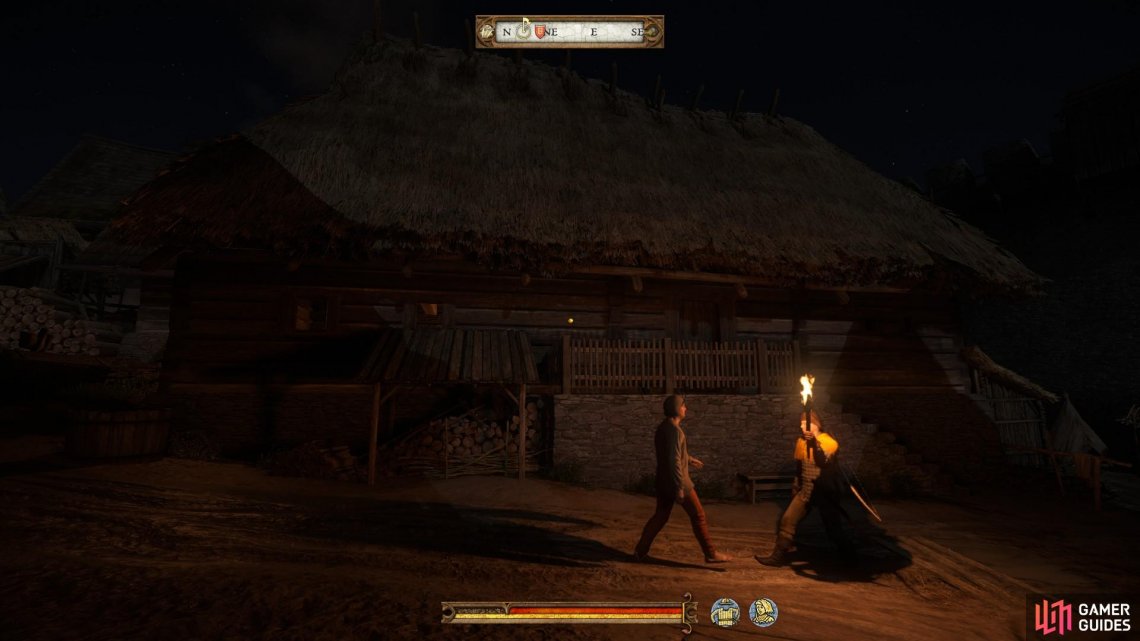 There are three guards which patrol regularly around Wolfram Pruda’s property.

In order to steal the ring from Wolfram, you will first have to infiltrate his house. Keep an eye on the three guards which patrol his property and wait until all three are a safe distance away from the front door. At this point you can pick the lock and enter the house, but be quick; you will have to get the ring and leave before they come back near the door, or they will suspect something suspicious and enter the house.

The safest way to get the ring is by knocking Wolfram out first. You can then loot the body, take the ring and run out. It is probably a good idea to wait at Miller Peshek’s farm until the morning to avoid any questioning from guards. At dawn, you can take the ring to the Vagabond.

The next phase of the activity chain involves stealing a guild seal from the local Ledetchko merchant. He will be at his shop all day long, where he is protected by a guard. There is therefore no possibility of stealing from him during the day without the guard noticing. Instead, you should wait until after midnight once more, when it will be possible to pick the lock of the shop and find the merchant sleeping. 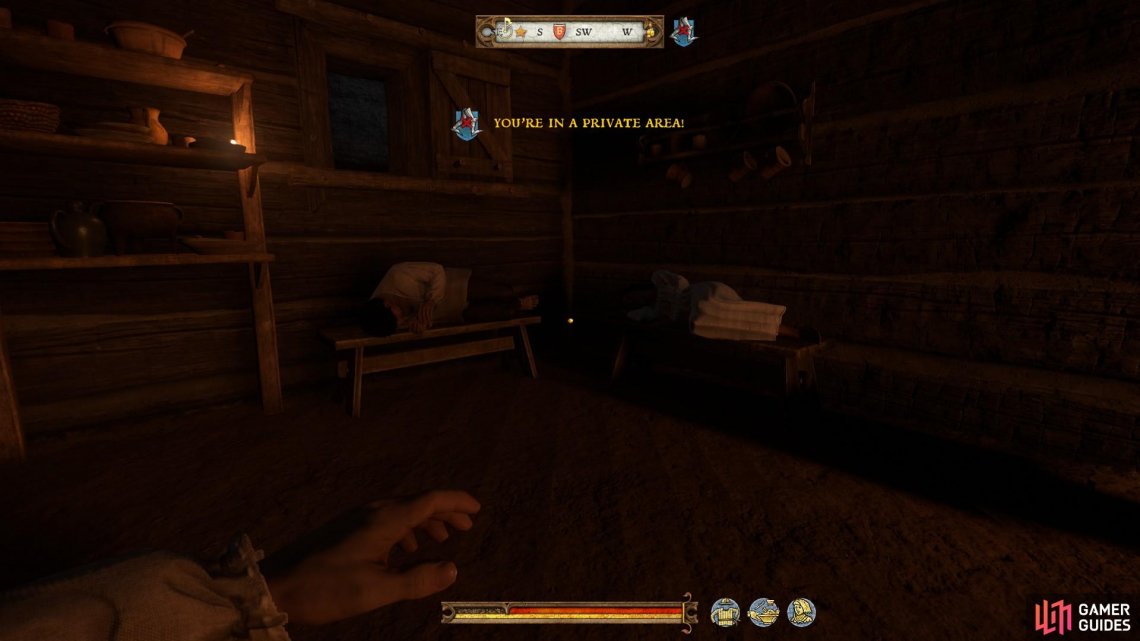 You will find the merchant sleeping very close to his wife, making it impossible to knock him out without her waking.

Since knocking the merchant out first is not an option here, you will have to pickpocket him. If your skill is high enough this will not be a problem, but be sure to do it as quickly as possible and get out of there to avoid attracting any interest from guards. Once you have the guild seal, take it back to the Vagabond in Rattay. 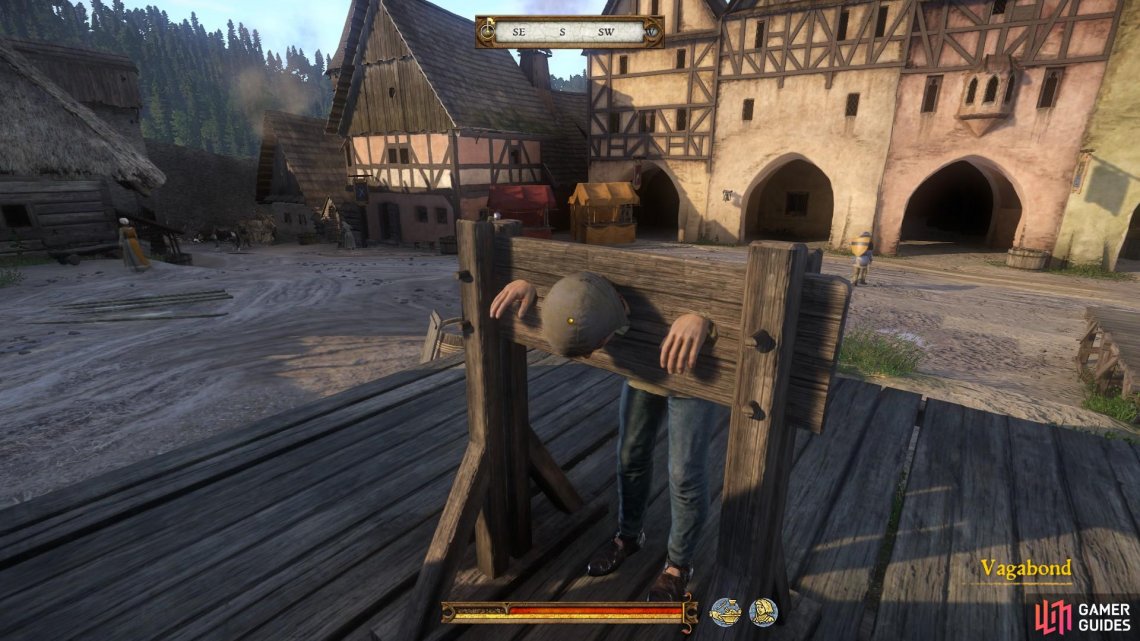 When you return to Rattay, you will find the Vagabond arrested in a pillory. You can speak to him, but he will not be able to reward you.

Speaking with the Vagabond will end the activity. You can sell the seal to a miller as he suggested.