This activity can be acquired from the butcher in Sasau. He’s having trouble supplying some rare meat, and would appreciate it if Henry would do the job for him. You therefore have a series of hunting tasks ahead of you, beginning with the hunting of boar. There are several boar hunting spots around Sasau, the nearest of which can be seen on the map below. The location of the nearest boar hunting spot to Sasau.

It should take only one boar to collect enough meat for the butcher. Return to him with the meat to receive the next phase of the quest.

The next form of meat required are four roe deer kidneys. Some deer will drop none, others one or two. You will probably need to kill at least three before you have enough. Keep in mind that they are much more skittish than red deer. You will need to persue them and perfect your aim to take them down. See the map below for the nearest roe deer hunting spot to Sasau.

Note: To acquire roe deer kidneys it is necessary to obtain the ‘Butcher’ perk in the hunting skill line. The location of the nearest roe deer hunting spot to Sasau.

Once you have handed in the roe deer kidneys, the next task is to hunt red deer for their livers. Red deer are much easier to hunt than roe deer. You can easily creep up on them from the foliage and take them out without them noticing. The nearest red deer hunting spot is north of the Sasau monastery, as seen on the map below. 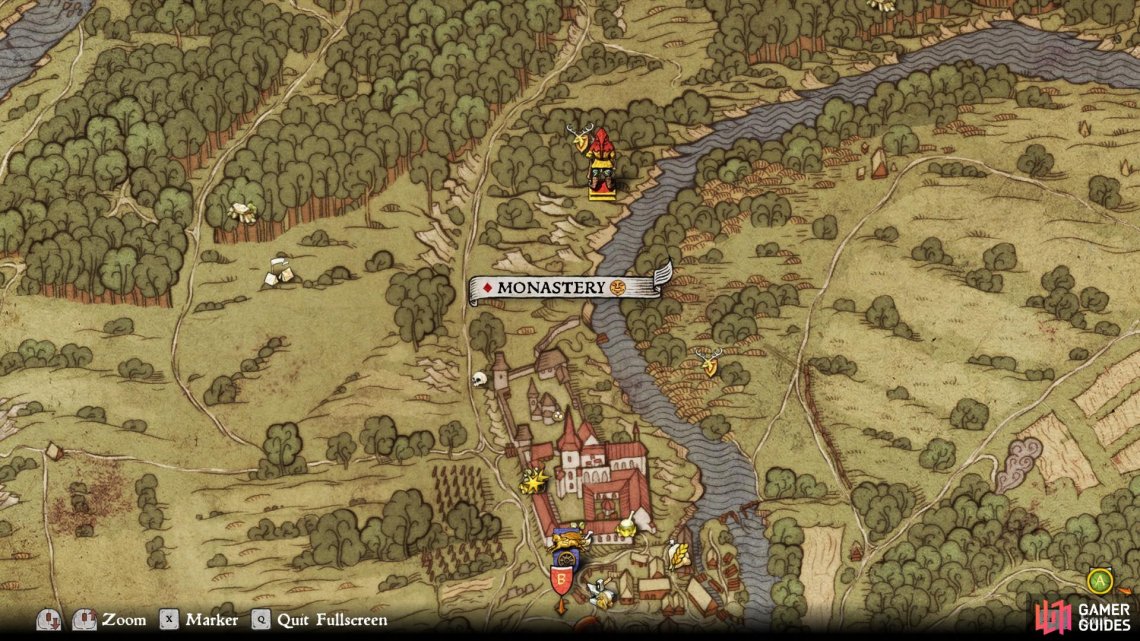 The location of the nearest red deer hunting spot to Sasau.

The next task is to acquire five pieces of hare offal. As usual, hare can be found in almost any significant density of woods. You should have no trouble finding them in the woods around Sasau, with the richest patches being in those west of Vranik or north west of the monastery.

When you return to the butcher with the hare offal, he will inform you that the Bailiff has become aware of his illegal trading. To ease his conscience, the butcher has offered to provide a feast of game for the Bailiff’s daughter on her wedding day.

You must now provide the following:

Go to the various hunting grounds mentioned above for each type of animal. Once you have enough meat, return to the butcher to complete the activity.