The combat system in Kingdom Come: Deliverance aims to accurately imitate fifteenth century fighting techniques as closely as possible. As such, although it is a dynamic system where the player is encouraged to adopt their own style with the freedom of being able to choose where to land blows in realistic ways, this in turn limits the prospect of creating unique character builds that might be found in other games based on fanciful fighting styles. Despite this, there are different ways in which a player can approach combat and general playstyle. These fall into three broad categories:

The role of a medieval knight is the basic build that you will be wise to utilise throughout the game. Although it is possible to play as a Thief or Archer in many situations, there will be times when the lighter armour of a thief and or the lack of an effective main hand weapon as an archer will make combat unnecessarily difficult. You will also find that you are more respected in full plate armour and will therefore be more persuasive in dialogue with other characters. The most effective armour when playing as a knight incorporates the following:

For each slot you will want to focus on using the armour with the most defence rating and durability. Noise rating is not much of a consideration here, but you should also compare armour pieces with negligible differences in defence ratings for their charisma stat. There are numerous combinations of different armour peices as a knight and your choice may partly depend on your visual preferences in cutscenes. The most important thing to keep in mind is to make use of every armour slot and never enter combat without an essential piece. If you are not wearing a helmet while facing difficult opponents, one blow to the head can kill you instantly. In terms of weapons, a longsword is the classic choice for a noble knight, but you can also choose to use an axe or mace with a shield. 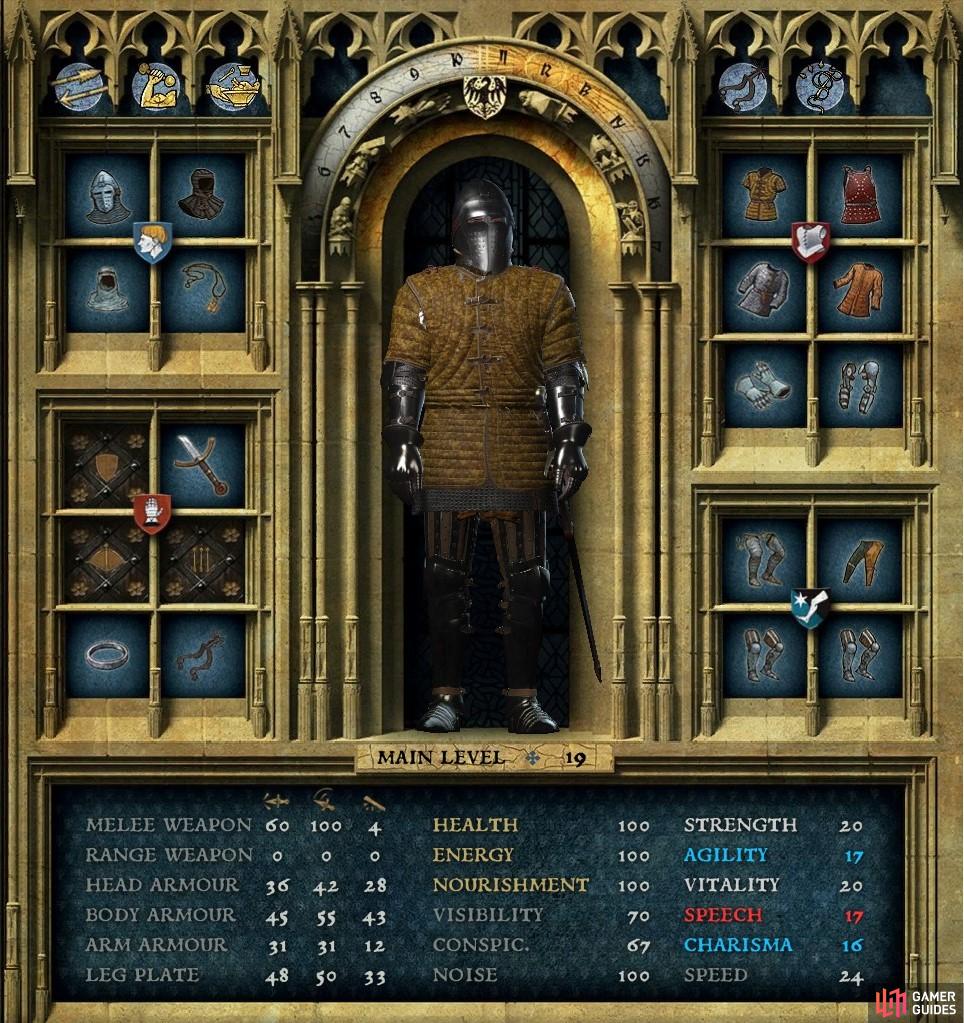 The knight setup will provide you with the most amount of defence and charisma, and should be counted as a necessity for most of the game.

In situations where playing as a Thief or inconspicuous scout is necessary, you will want to remove some of the armour pieces that are essential as a sturdy knight. In general you should choose your armour pieces based on a balance of noise level and defence rating, with a focus on the former attribute. Do not forget to remove spurs as they have the highest noise rating possible and will give your presence away very easily. Your weapons do not make any noise, but be sure to have a dagger in your inventory to enable stealth skills (requires the Stealth perk ‘Stealth Kill’). The noisiest pieces of armour are helmet, head chainmail, body chainmail, body plate, body garment, arm armour, leg chainmail and leg plate, leaving you with the following slots to create a practically noiseless build:

When wearing this combination of armour it is essential that your activities do not result in an armed conflict with multiple foes arrayed in plate armour. You will not last long unless you aim to stealth kill or isolate one fight at a time with consistently accurate blows to vulnerable body parts. It is also important to pick out darker armour pieces to make yourself less noticeable at night and therefore maximising the chances of successful subterfuge and sabotage. 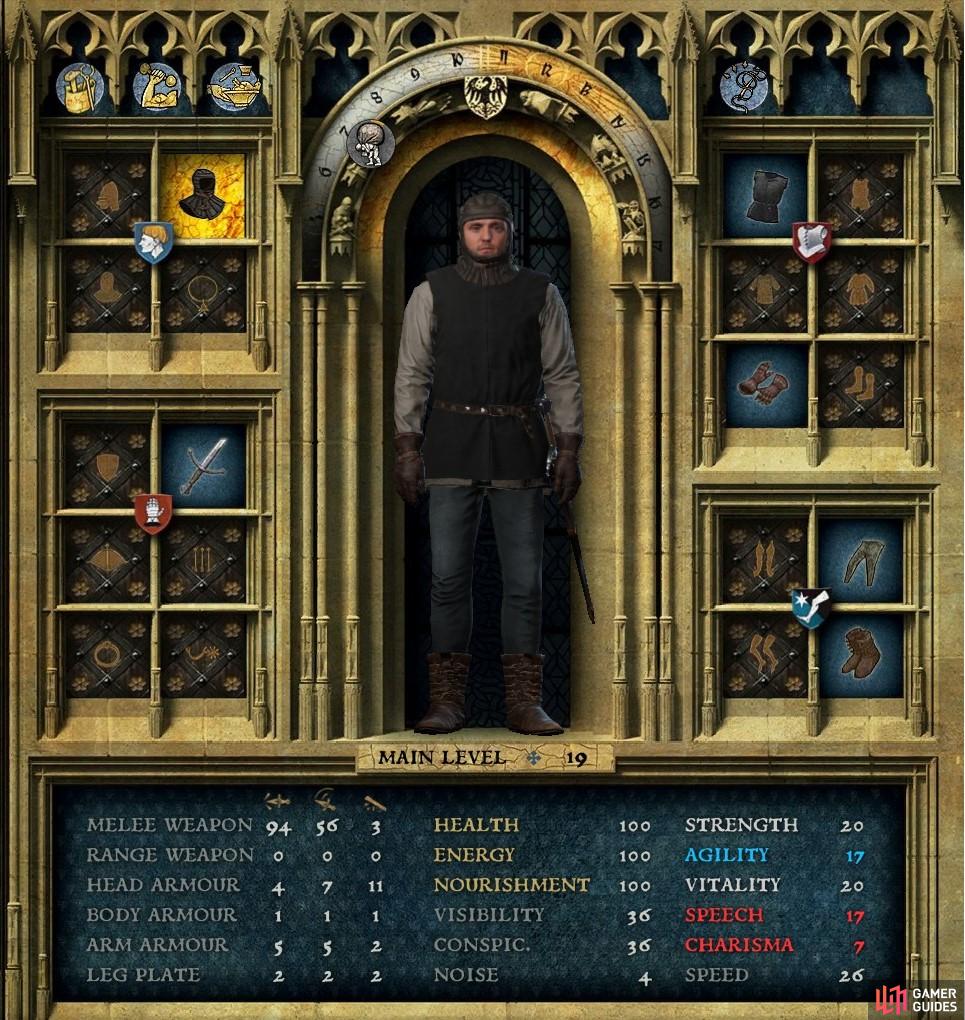 The thief setup should focus on minimising noisy armour pieces while maintaining some level of protected to vulnerable parts of the body, such as the head and neck.

An Archery build can be made with minimal alterations to the Knight build, depending on the context in which it is being used. If you are aiming to take out the majority of your targets before they see or reach you, the only differences between an Archery and Knight build will be the addition of a bow and arrows. If any opponents get too close, you can always draw your main hand weapon and deal with them in hand to hand combat. However, it is important that you maintain skill levels in both styles of combat to ensure that you do not become outmatched later in the game. There is no real purpose in creating a lightweight archer build with the intention of kiting opponents, as they will almost always catch up with you even if you are wearing minimal armour. In addition, there is always the risk of having to face other archers, in which case light armour would make you vulnerable to sustaining heavy damage.

Overall, each build should be considered based on specific circumstances throughout the game, rather than as a dedicated approach as in other games which do not focus on combat realism. The range of different encounters means that you will find it difficult to play as a dedicated knight, thief or archer and emerge successful in one specific role. The most effective approach is to alternate between each build depending on the circumstances at hand. It is recommended to focus on playing in the role of a Knight for the majority of fights with large numbers of opponents. In circumstances where you have the initiative it is a good idea to shoot as many opponents as possible before they reach you. In situations where full plate armour is too noisy to effectively infiltrate a camp or building, switch to a Thief build that can be stored in your Horse inventory for easy access.