The third chapter focuses on Henry’s desire to find and bury his parents. Having escaped from Talmberg, you are now in the small village of Rovna, on the outskirts of Skalitz. 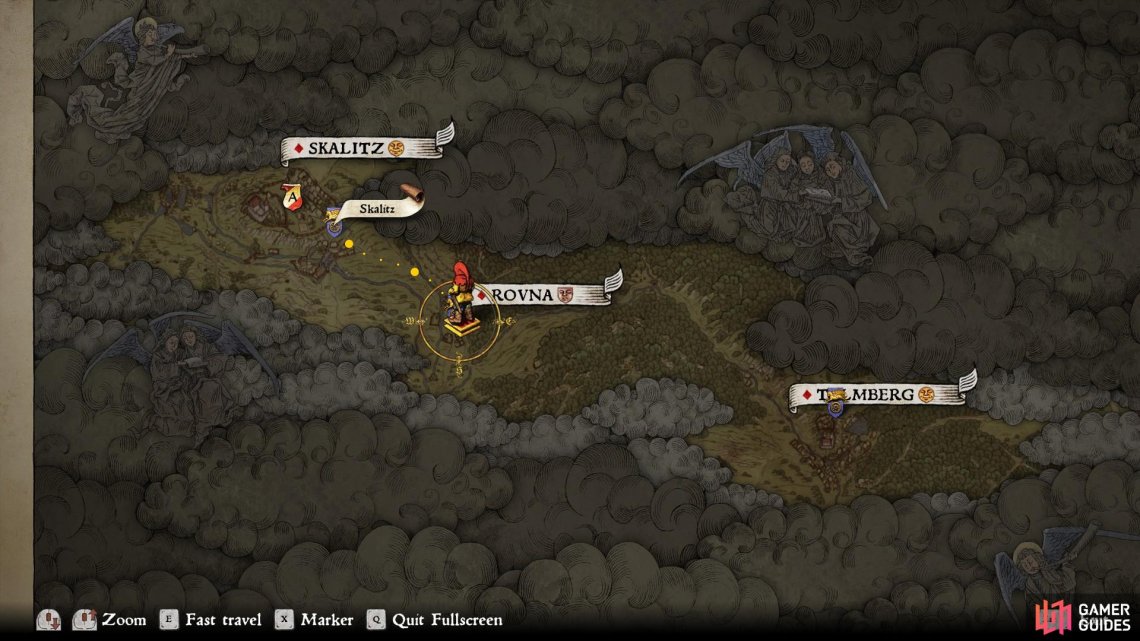 Head toward Skalitz to begin the search for Henry’s parents.

As you make your way to Skalitz, it is a good idea to inspect the fallen villagers and loot whatever valuables they might contain. You are on a dangerous path now; there is no use in squandering any help you can find in the form of food, Groschen, bandages and weapons. If the act churns your stomach, though, it is not essential to the quest so there is no need to be concerned about plundering the dead. 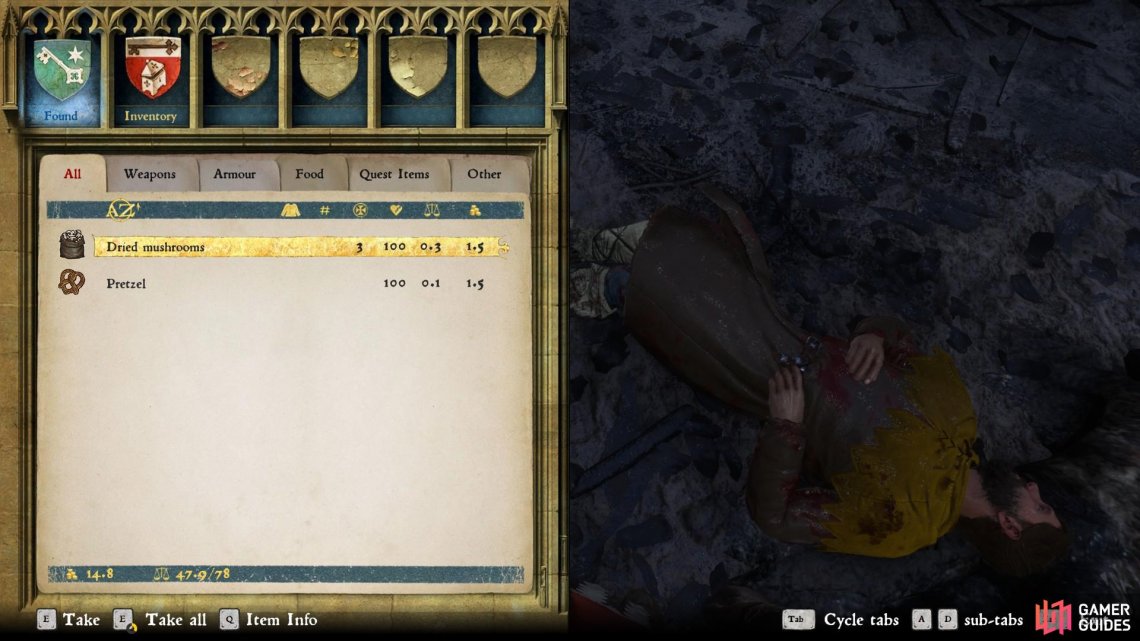 Inspect the dead bodies for any useful items if you are feeling an affinity with acts of despicable barbarism.

Another thing to look out for along the road to Skalitz are bandits looting corpses. They will not be happy to see you and will attack as soon as they do. See Combat for advice on how to defend yourself and fight effectively. 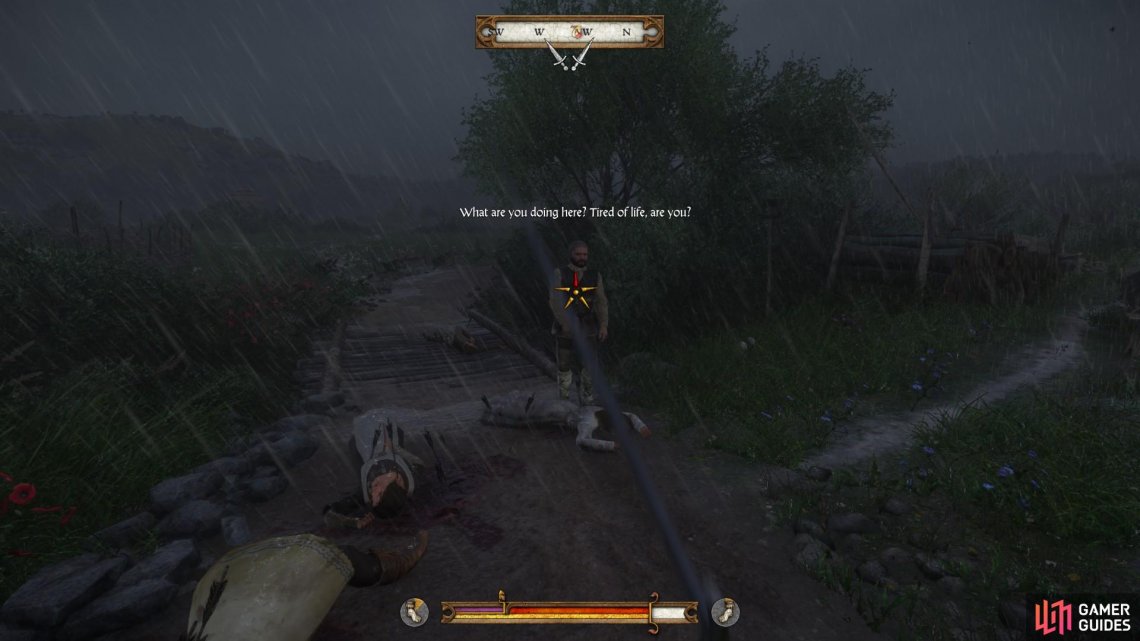 Be prepared to defend yourself against any bandits that you find looting corpses.

If you defeat the bandits without dealing a killing blow they will either surrender or flee. In the event of a surrender, you will have a number of options to choose from with regard to how you want to respond. The choice is yours and has no real bearing on the development of Henry as a character (excluding subjective role play considerations), but keep in mind that if you let the bandit go, you may be relinquishing valuable loot. 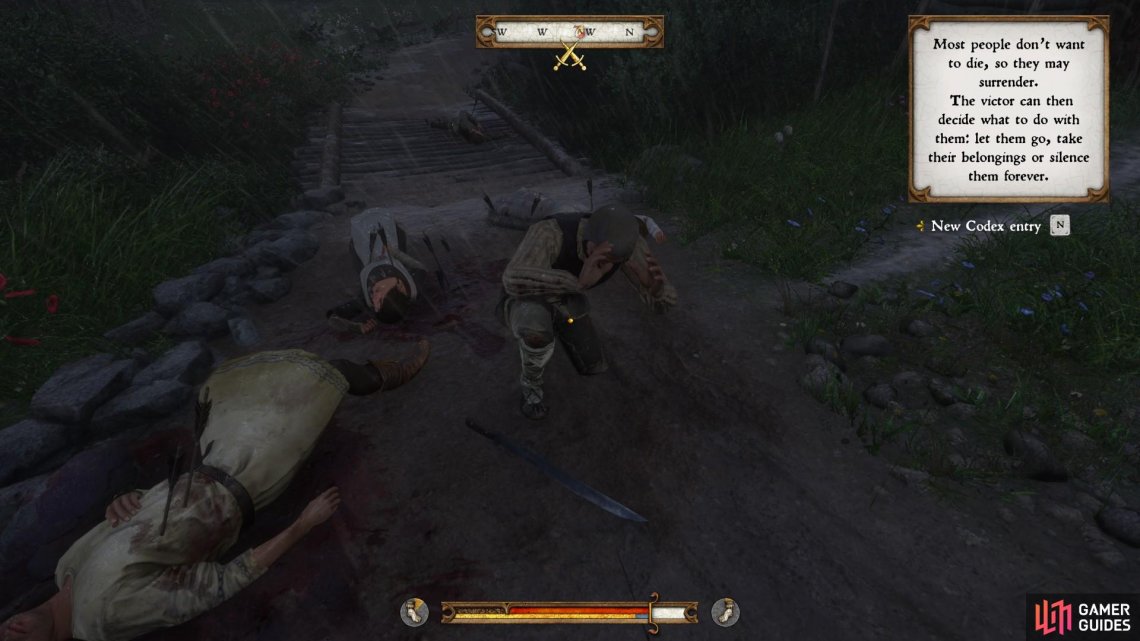 (1 of 2) Sufficiently besting an opponent in combat will cause them to surrender. 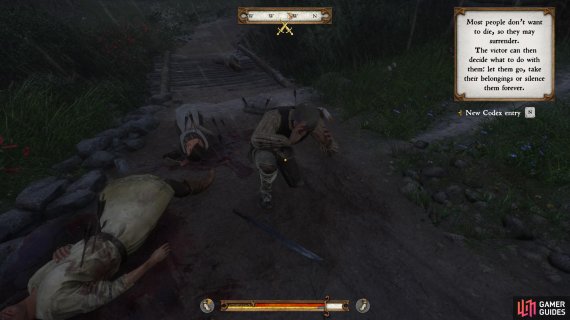 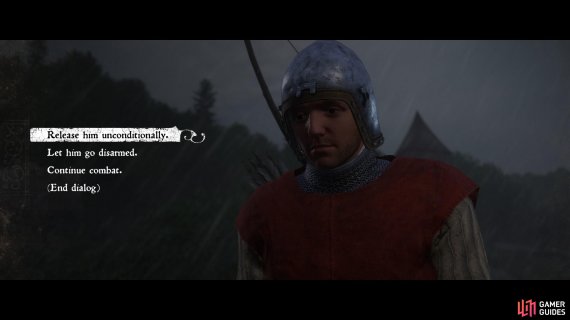 Sufficiently besting an opponent in combat will cause them to surrender. (left), Your response to the surrender may depend on role play sensibilities or the prospect of loot gain. (right)

When you reach the walls of Skalitz you will find that the southern gate has been destroyed and is blocked by rubble. Turn right along the path and head toward the northern gate. 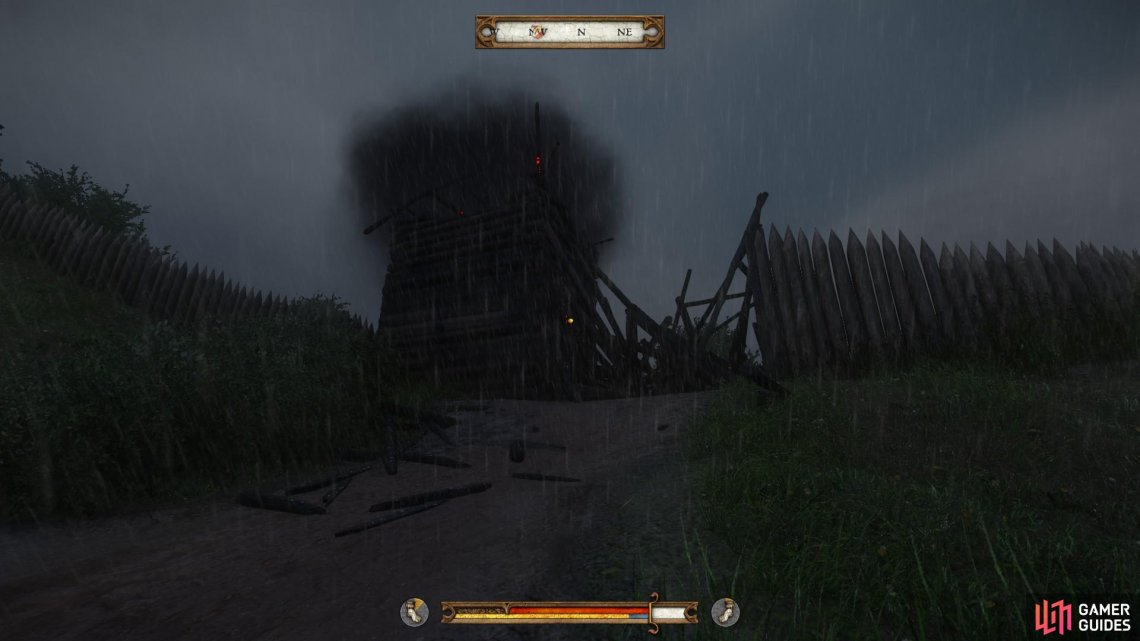 Skalitz is inaccessible from the southern gate. Head to the northern gate to gain access.

As you enter through the northern gate you will find the Baliff dead on the ground. He died with a sword in his hand, Shard, which is worth picking up. 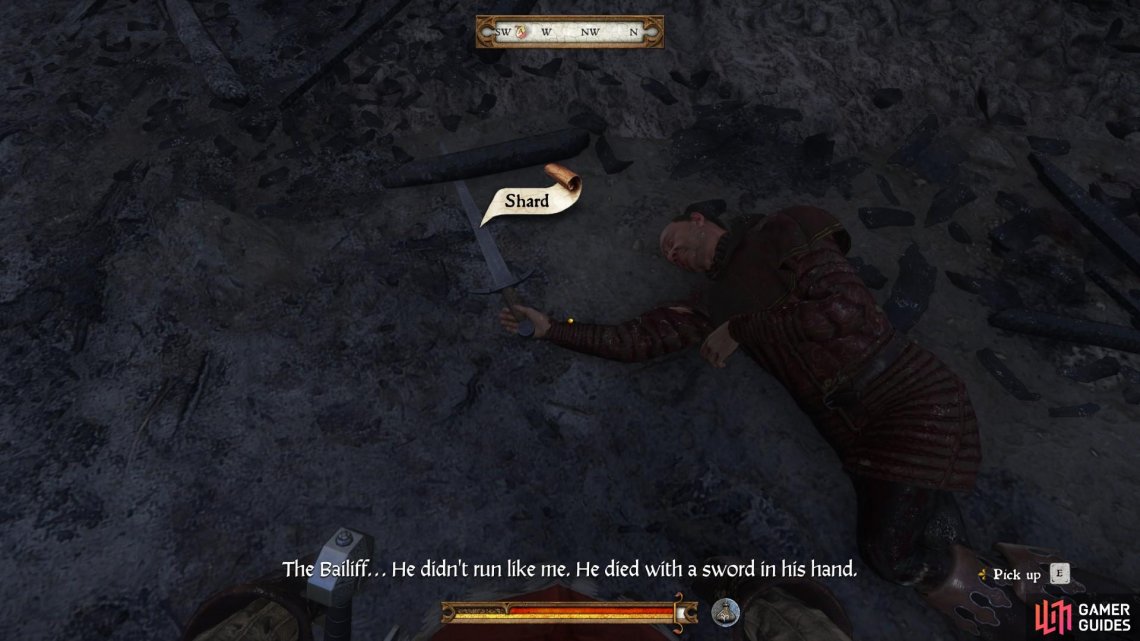 Pick up Shard, the sword from the Baliff of Skalitz.

Walk further into Skalitz. When you come up to the tavern you will find Bianca, Henry’s girlfriend, lying dead on the ground. Inspect her body to retrieve her ring and a Saviour Schnapps potion. 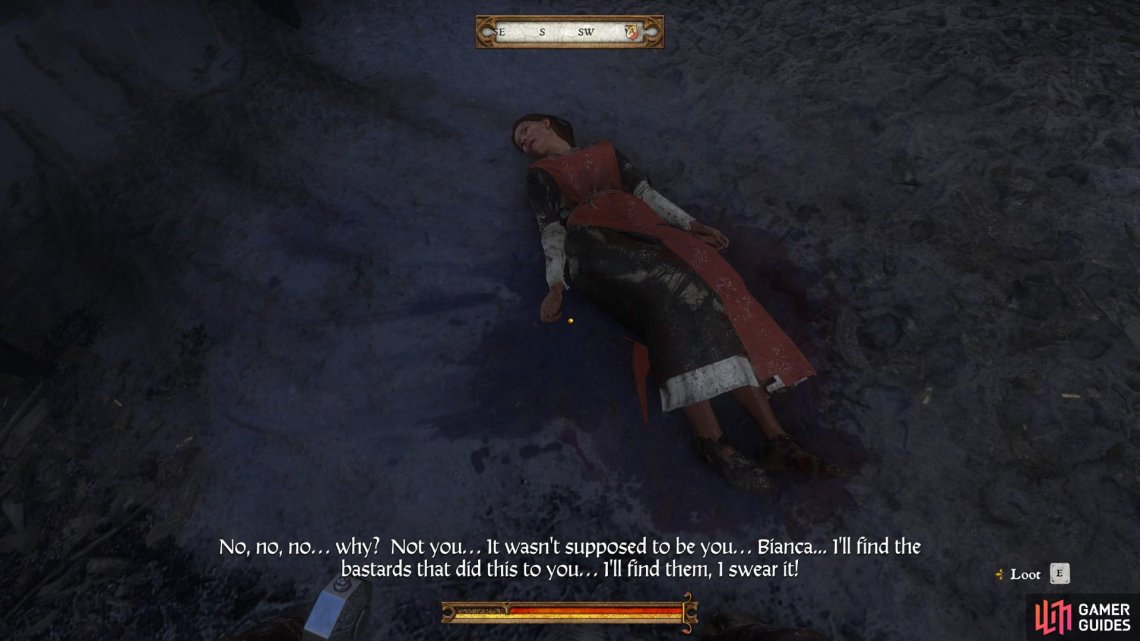 Inspect Bianca to find her ring and a Saviour Schnapps potion.

Now head up the path to where you saw your parents last. You will find them lying next to each other just as they fell. 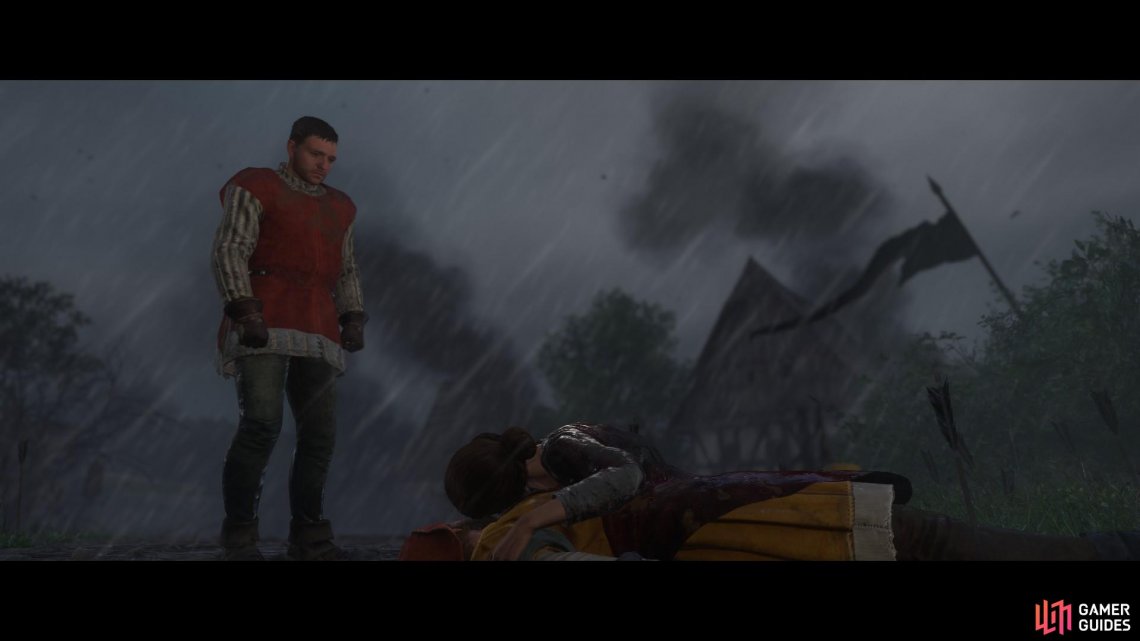 A cut scene follows in which Henry makes what little peace he can with the loss of his parents.

It is now time to bury them. To do so you will need to find a shovel. Head back toward the northern gate and follow the sound of the dog barking. Keep to the left and a cutscene will follow in which Henry finds Zvyshek attempting to loot the corpse of the butcher, who is being protected by his dog. 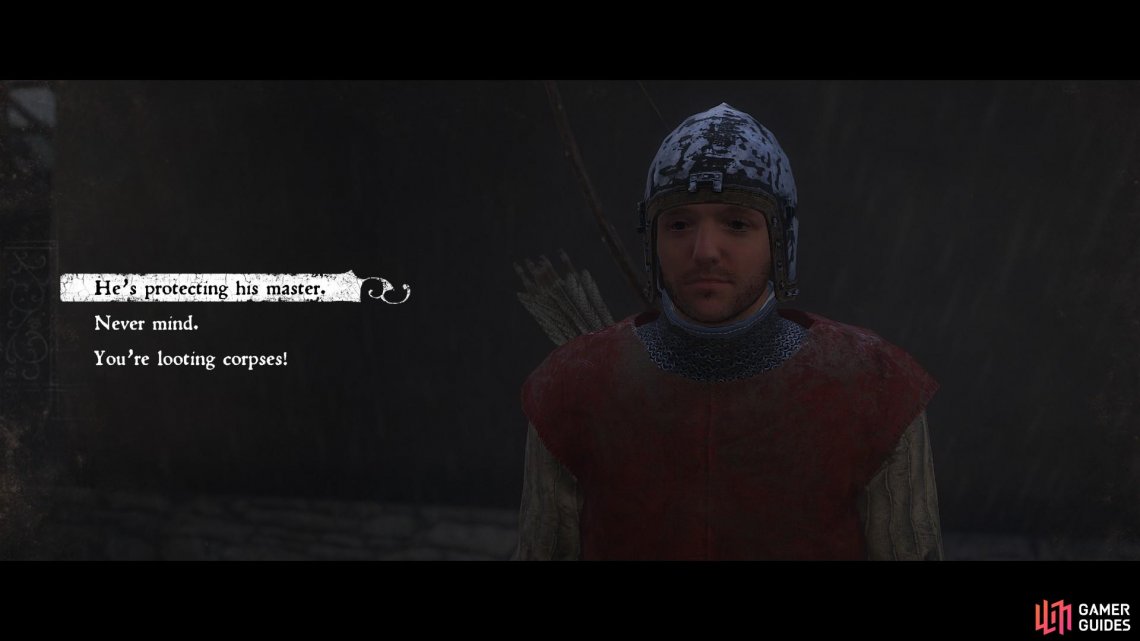 Exhaust the dialogue options with Zvyshek until you intimidate him or beat him in a fist fight, causing him to flee.

You can now go back to the butcher and his dog where you will find the spade. Pick it up and head back out into the village centre. Go to your old house near the castle to prepare the grave for your parents under the Linden tree. 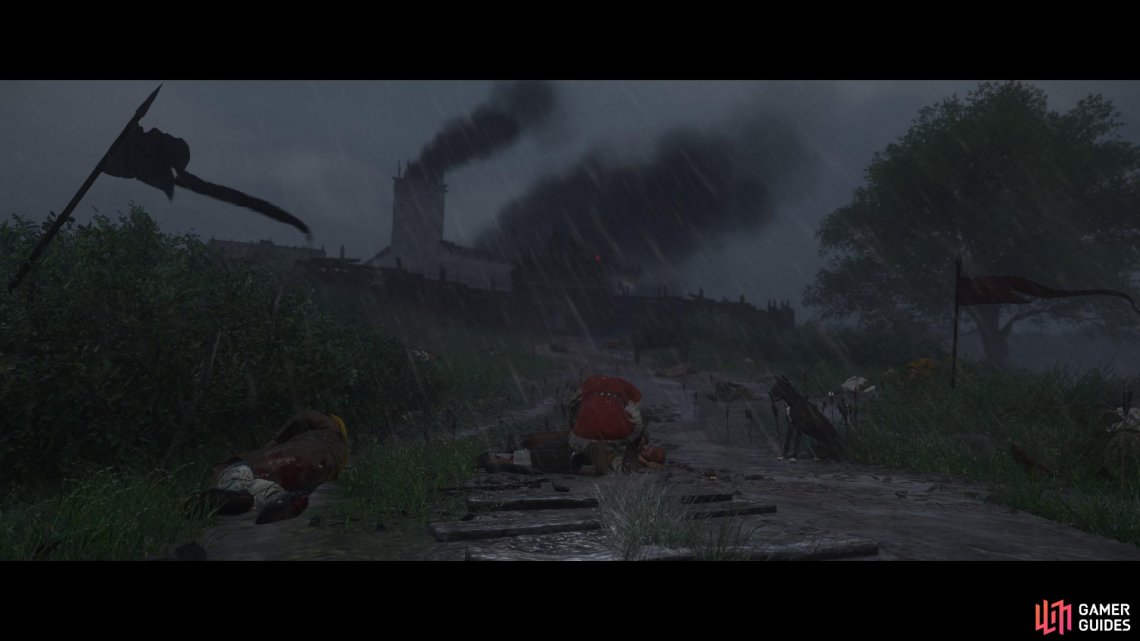 (1 of 2) As you begin to dig the grave a cutscene will initiate, eventually leading you back to Henry’s parents. 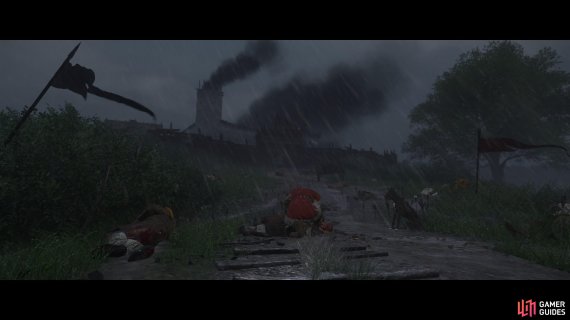 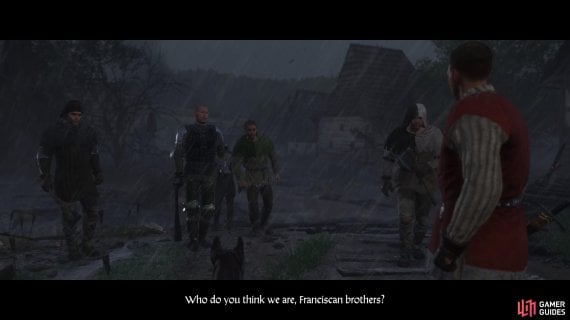 As you begin to dig the grave a cutscene will initiate, eventually leading you back to Henry’s parents. (left), The cutscene will end with Zvyshek returning with a group of bandits and their leader, Runt. (right)

The bandit leader, Runt, will not let Henry go until he hands over Sir Radzig’s sword. You will have to face him in a fight, but it will soon be over as you are rescued by Theresa and Sir Robard. 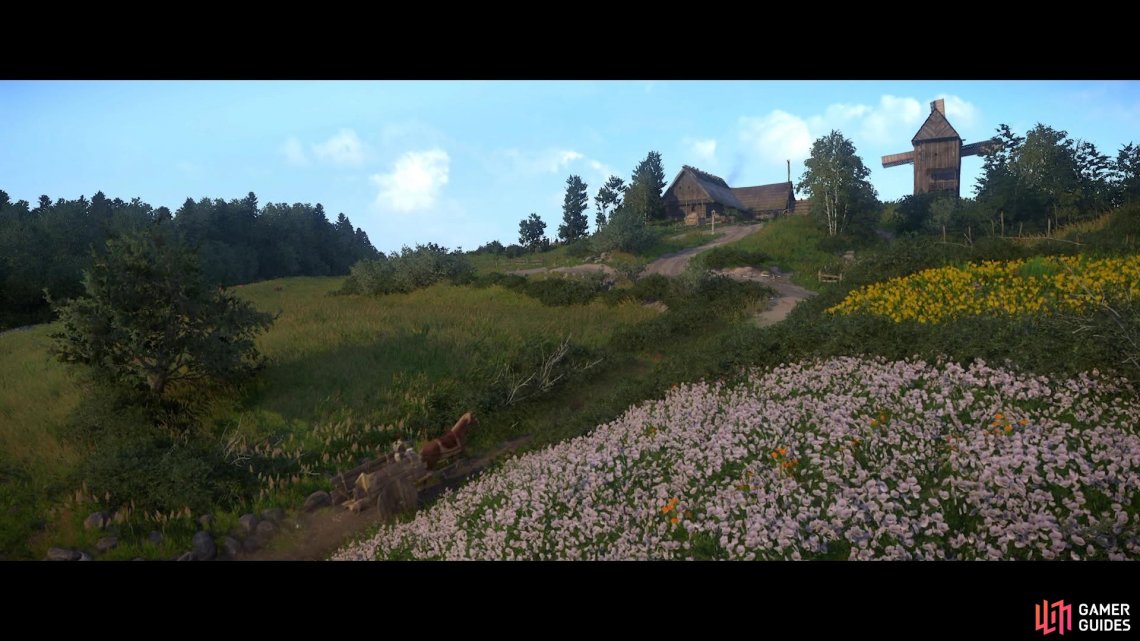 The chapter ends with Theresa taking Henry to Rattay by horse and carriage.