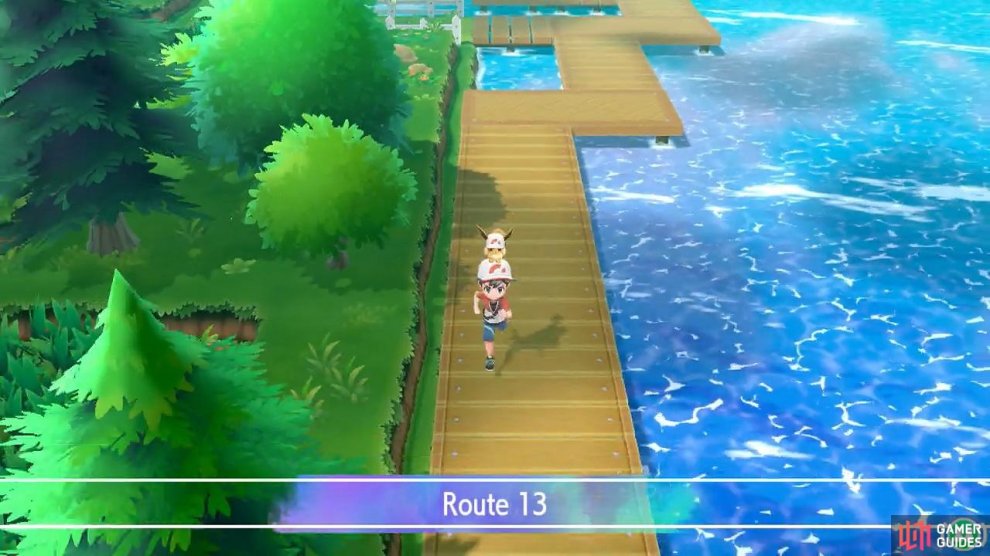 This route lies between Route 12 and Route 14. By entering it, it means you're a quarter way to Fuchsia City. If you need to take a break, do it now. Go and grab a cuppa or something; we'll still be waiting here. Anyway, after reaching the first corner, there's a Camper and Picnicker pair having a chat. Interrupt them or not?

Nash leads with a lowly Sandshrew. However, it does have know Earthquake, a fairly damaging move. Grass-types are recommended, while Water and Ice are also solid choices. Sandslash, as you can probably tell is an evolved Sandshrew. This one also has Earthquake, so you'll want to defeat it quick.

Susie also starts with a weak, unevolved Pokémon. Jigglypuff is a rare Fairy-type that's weak to Poison and Steel. It has strong Normal-type STAB moves and can use Rest to restore health, but we'll be surprised if it survives your first move.

Weepinbell is the middle evolution of Bellsprout. It shares the same weaknesses as its unevolved form: Fire, Flying, Ice and Psychic. Susie's Weepinbell has Grass and Poison STAB moves, plus moves that inflict Paralyse and Poison.

Make your way west from the camping pair. You'll reach Route 13's infamous landmark: the long maze of fences. We never want to meet the person who designed this place... Anyway, it's not hard to navigate, just a little annoying. At the start of the maze, there's a Beauty along the top. You can avoid her if you don't enter her line of sight.

Chansey can be pretty intimidating in a competitive setting, but it's at most a nuisance here. It can use Minimize to boost its evasion and Sing to cause Sleep. Because it has high Special Defence, focus on physical attacks, especially Fighting-type ones.

To start with, head west along the bottom-most row of the fence maze. Keep going all the way west, past a Bug Catcher and a Picnicker. To the Picnicker's south-west, you can search the gap in the fences for a hidden Golden Pinap Berry. If you want, you can battle the Picnicker now.

Gwen has a Raticate that you might be bored of seeing now. This one has the common moveset of Super Fang (halves foe's current HP), Sucker Punch (a Dark-type move that goes first if foe is using an attacking move) and Crunch (a strong Dark-type move). Fighting-types are king here.

Next is Golduck, an evolved Psyduck. This Psychic wannabe that isn't actually a Psychic-type can use a STAB-boosted Surf and a non-STAB Psybeam. Grass-types are great here, even if they're part Poison, as are Electric-types.

If you battled the Picnicker, you have the option of skipping ahead by heading west along the row just above her. Otherwise, let's keep exploring around here. Return east, towards the Bug Catcher halfway up. He's patiently guarding one of the routes you can take, along the middle row. If you're not looking to battle, go past him on the right. 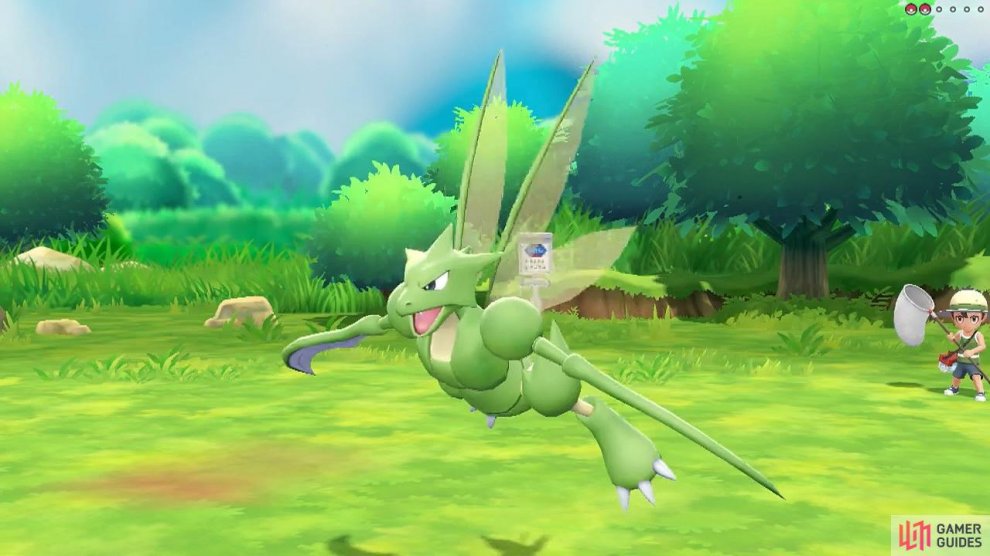 Milo has a pair of exceptionally rare Bug-types. Mad props to him. His Scyther is weak to Fire, Electric, Ice and Flying, and takes heavy damage from Rock. It's quite fast, but nothing you can't handle.

Pinsir is a lot more straightforward; it's weak to the usual Fire, Flying and Rock. However, it can use Brick Break and Submission to hurt Rock-types. Plus it can use Swords Dance to greatly boost its Attack. Exterminate it quickly.

After battling the Bug Catcher, you can follow the middle row west if you desire. Otherwise, head north-east towards the Beauty, keeping to her left. Next, go west from the Beauty, towards the nearby signpost. If you lured the Beauty into a battle earlier, then use the Beauty's original position as a reference point instead.

Go up from the left of the signpost, then head east along the top-most row. There will be a skinny tree that can Chop Down. On the other side is an Ace Trainer who's looking forward to a battle. Or you can go past him by keeping to the south. Past him is a patch of tall grass. At the far end is a PP Up.

Quite a varied team, but nothing really new. Graveler is an evolved Geodude; it's still heavily weak to Grass and Water, and weak to Ground, Fighting and Steel. It has Earthquake, so Steel-types are ill-advised. It can also use Stealth Rock to hurt switch-ins.

Magneton is an evolved Magnemite; likewise, it's still immensely weak to Ground, and weak to Fire and Fighting. This one can use STAB-boosted Thunderbolt and Flash Cannon. Plus Light Screen to fend off special attacks and Thunder Wave to paralyse. Ground-types are obviously ace.

Finally, Haunter is weak to Ground, Psychic and Dark. This ghoulish Ghost can use STAB-boosted Shadow Ball, Dark Pulse to potentially cause flinch, and Will-O-Wisp to inflict Burn. Dark-types are ideal, while Ground-types are also a wise choice. Only use Psychics if you believe in them.

Go back to the signpost and continue west. Nearby, towards the top is a Bird Keeper, who's guarding the route you need to go through to proceed--along the very top. He will swap between looking up and right, meaning you can avoid him when he's looking the other way.

Well, of course a Bird Keeper is going to send out Flying-types. We hope you're smart and picked a Electric, Rock or Ice-type. Doduo is super easy, but it does know Swords Dance to boost its Attack, and Jump Kick to damage Rock-types.

Pidgeotto is slightly stronger, but again a fairly simple foe. This one can use Roost to restore its HP and lose its Flying typing for one turn. If it can survive long enough to use it is another story altogether.

Otherwise, if you go west from below where Robert is standing, you can fight your way past a second Beauty.

Sheila seems to be a fan of Normal-types. Eevee is pretty weak in its current form. It does have Double Edge, a very powerful move, but it doesn't quite have the stats to back it up. Punish it with Fighting-types or whatever's your strongest.

Persian is an evolved Meowth--and you may remember it from your battle with Giovanni. This one can use Screech to greatly lower your Defence, before retaliating with a dangerous Slash or Fury Swipes. Again, stick to your Fighting-types if you have any. 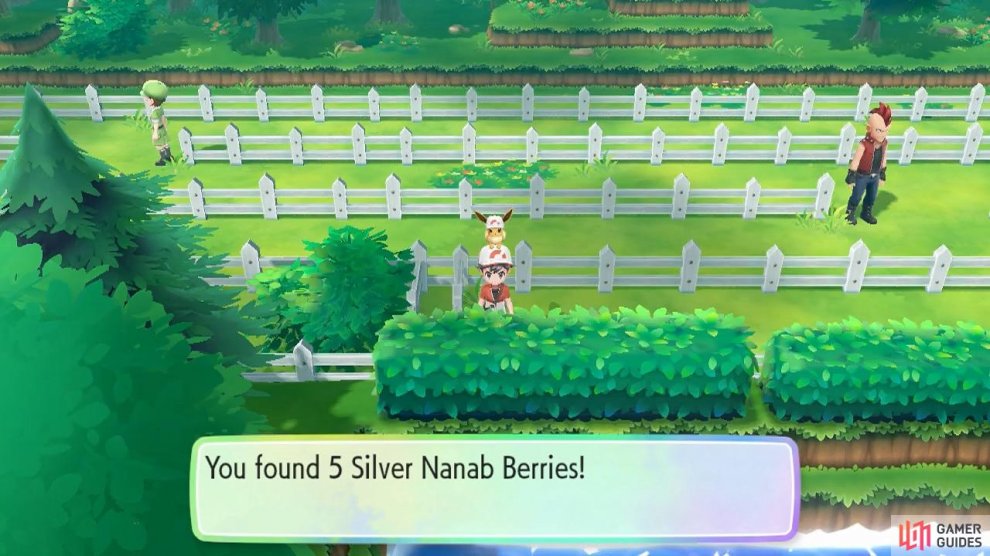 Now, if you fought any one of Picnicker Gwen, Bug Catcher Milo or Beauty Sheila, head west while keeping towards the south. When you reach the dead end to the far west, search the hedges below for a hidden stash of 5 Silver Nanab Berries. Yum, yum.

In any case, keep on going west from above Bird Keeper Robert. Slow down when you get near the bush below. To the left, there's a Camper looking right and down. When he looks right, he can see you if you get too close. To his left is a Full Heal; if you want to quickly grab it, you can choose to lure him into a battle.

This Growlithe knows a bunch of tricks, but we're unsure if it'll even get a chance to show them off. It knows the Dark-type Crunch, Dragon-type Outrage and Fairy-type Play Rough. None of them are particularly useful though.

Meanwhile, his Nidorino has Toxic as its most dangerous move, if you can even call it that. Steel-types can completely wall it, while Poison-types that have an advantageous or neutral secondary typing are also solid choices.

If you continue west from Perry, you'll eventually enter Route 14. But there are multiple ways you can reach Route 14. Firstly, you can go via the row below the top-most one. If you want to grab the Full Heal without battling Perry, you'll want to go along this route.

Otherwise, you can go across the row below that one--in other words, the middle row. To avoid further battles, you should follow this route instead. You can also do that after getting the Full Heal. As you go along the middle row, there will be a tough-looking guy standing between a gap in the fences.

He will alternate between looking right and down. That means you can easily run past him from above. You can also sneak past below him when he's turning in the wrong direction and, from there, travel along the next row down.

Hmm, not a terribly exciting foe considering how many you've faced. Still, the next Gym is the Poison-type Gym, so you should prepare some Poison-type counters--including a Golbat counter--if you haven't already done so. For Golbat, that means a solid Electric, Rock or Psychic-type.

If you go along the row below where Jared is standing, you can also reach Route 14 that way. So you've actually got three ways to enter Route 14. No, make that four ways if you lured Perry out and go along the top-most row. Now it doesn't matter too much how you enter Route 14, so long as you eventually get there.

Basically the same Pokémon as Route 12, but there's a bit more breathing space. Still, it'd be nice if there was more room...