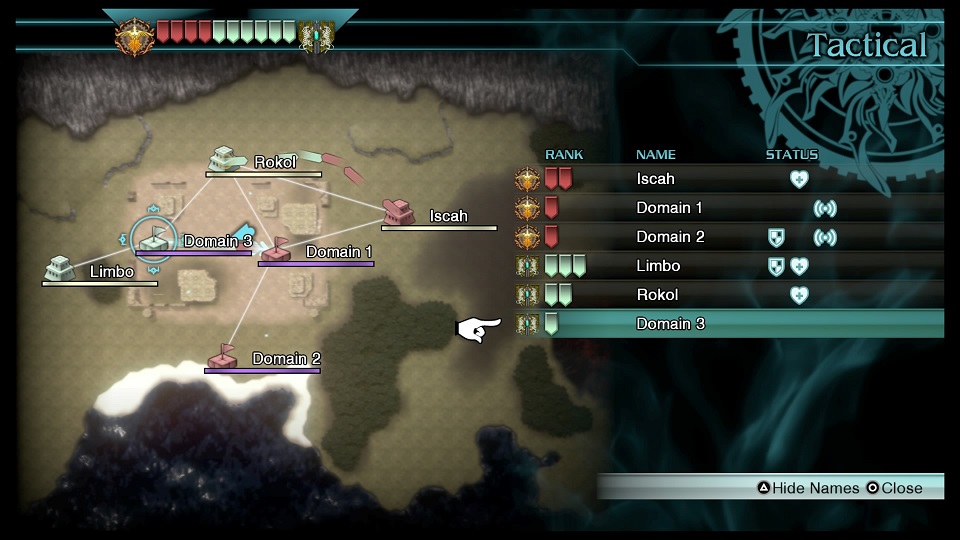 It seems that Domain 1 for your side is in quite a precarious situation at the start of the battle, so head over there and clear the enemies attacking it, including the Carrier. While keeping the enemies at bay, wait for the timer to end, after which, your own troops will start coming out of Domain 1 again. This will allow you to go after the Autoturret on top of the plateau nearby.

With all of that under control, you'll gain control of the troops for Domain 1 and 2, so direct 2's troops to go after Rokol while leaving 1's alone. This should be more than enough to bring down the energy wall, allowing you to invade the town.

Upon returning to the overworld map, you'll have two Mid-Sized Carriers come out of Limbo and go after your own towns and strongholds. Hurry to them and shoot them down, then concentrate on getting Domain 3 under your control. From there, you'll have the task of cutting through Colossi from Limbo to get your troops to the stronghold so they can bring down the energy wall. Once it is destroyed, invade Limbo.

Waiting for you in the first area will be some Nymurods and Imperial Troopers. Be careful of the fuel tanks near the wall of the compound and once you take down all foes, the gate to the final area will open. At first, it looks like nothing is there, but a lone enemy commander (Supersoldier) will come out to play. Defeat him to capture the place and end the mission.