The game begins in the castle village of Skalitz, the home of main character Henry. As the son of a blacksmith Henry is expected to aid his father in the role of an apprentice. Henry’s mother wakes him and asks what he was doing last night. You have four responses to choose from which will contribute to your character development. These choices relate to the following stats; Speech, Agility, Vitality and Strength. See ‘Overview of Stats’ to learn the effects of each and how they influence different aspects of gameplay. Once you have chosen the stat that you want to specialise in, select the appropriate response and do the same for the subsequent dialogue options. 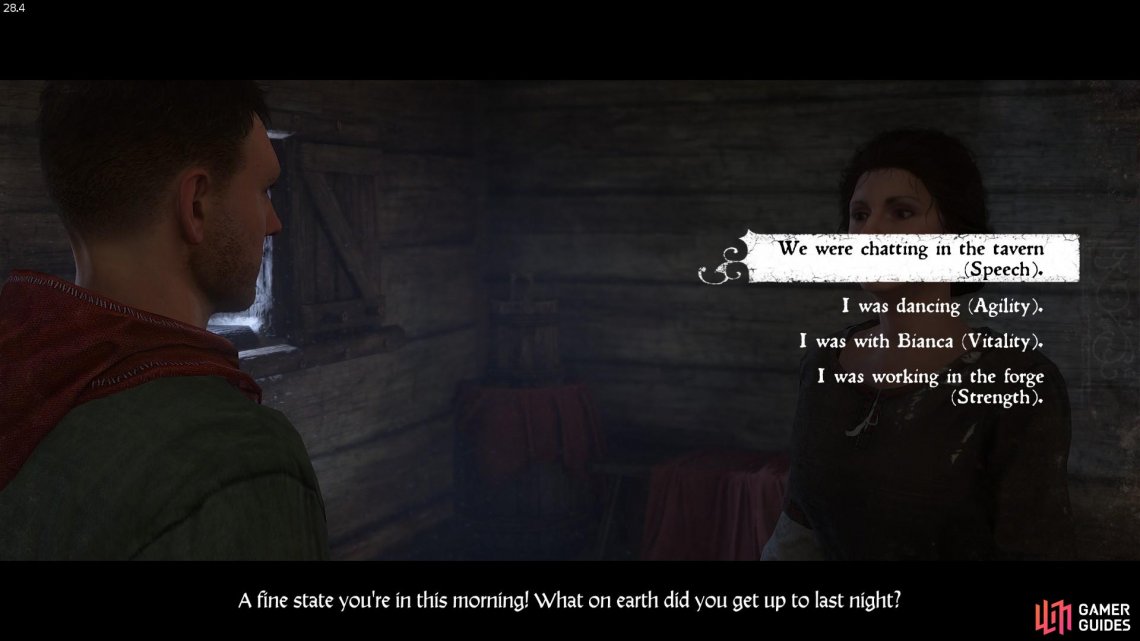 Select the dialogue associated with the stat that you want to enhance.

Before you go to Henry’s father or the sword fighting lesson, exhaust the dialogue options with his mother. In this particular case you will have a limited amount of time to do so, but it is good practice to thoroughly enquire about everything available to you in dialogue with other characters regardless of how much time you are associated with them. This will not only allow you to learn more about the finer details of the world; it will also ensure that you pick up any side quests which would otherwise be lost to unexplored dialogue options.

After speaking with Henry’s mother you will be noitified of a new perk point available to you in one of the stats that you chose to enhance. You may soon find yourself in need of its perks, so it is a good idea to invest in one before you do anything else. Keep an eye and an ear out for the notifications in the top left corner for any further advancement opportunities upon gaining new levels. Notice also the icon to the right of your Health and Stamina bar which indicates that you are hungry. Eat from the cooking pot and whatever food you wish from the table before leaving the house, but take note of your ‘Nourishment’ stat in the main menu and be sure not to exceed 100 to avoid feeling stuffed. 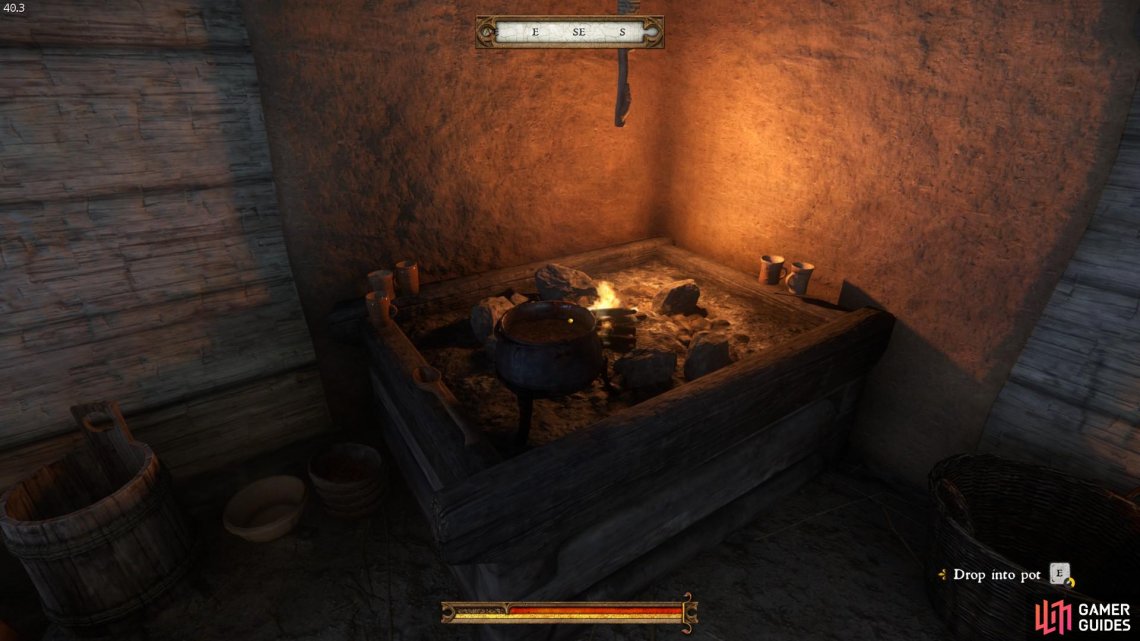 Don’t forget to eat from the cooking pot before you leave to avoid adverse effects.

Upon leaving the house turn right from the front door and walk along the path to the forge where Henry’s father is working. Speak to him. 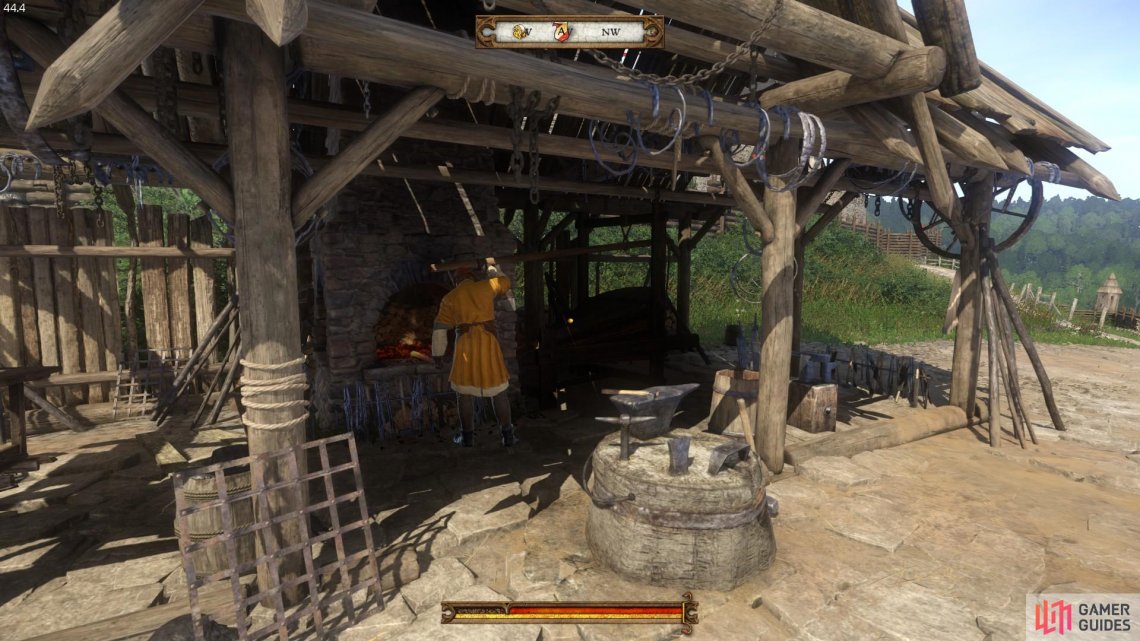 Speak to Henry’s father to proceed with the main quest.

The ensuing dialogue will provide you with your first encounter of persuasion options. See ‘Dialogue Options’ for more information on these. Choose the option with the highest rating or whatever suites your role play preferences. After speaking with Henry’s father you will have a number of tasks to complete which include picking up the cross-guard from the castle for Sir Radzig’s sword, buying a bag of charcoal at the market and buying ale from the tavern. Start by going to the castle to pick up the cross-guard. You will have to speak to one of the guards at the gate. 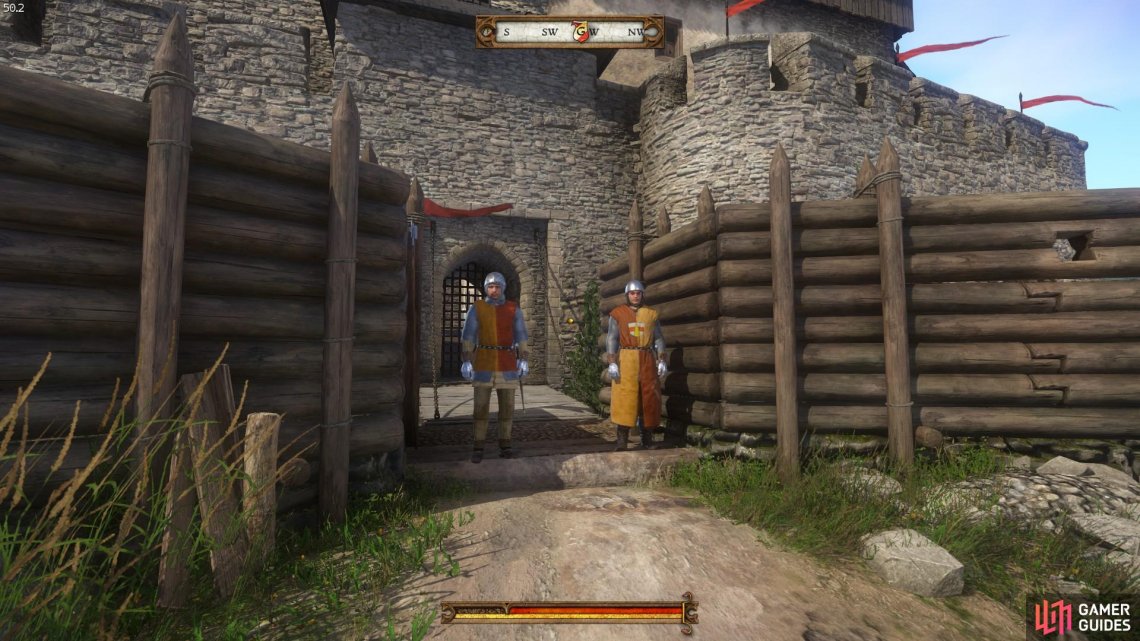 Speak to the guards to pick up the cross-guard for Sir Radzig’s sword.

In order to buy the charcoal and the ale you will need to collect the debt from the drunk Kunesh. Head down the path toward the market and take the first left to where Kunesh is working beside his house. You will find him chopping wood with the axe for which he has failed to pay. 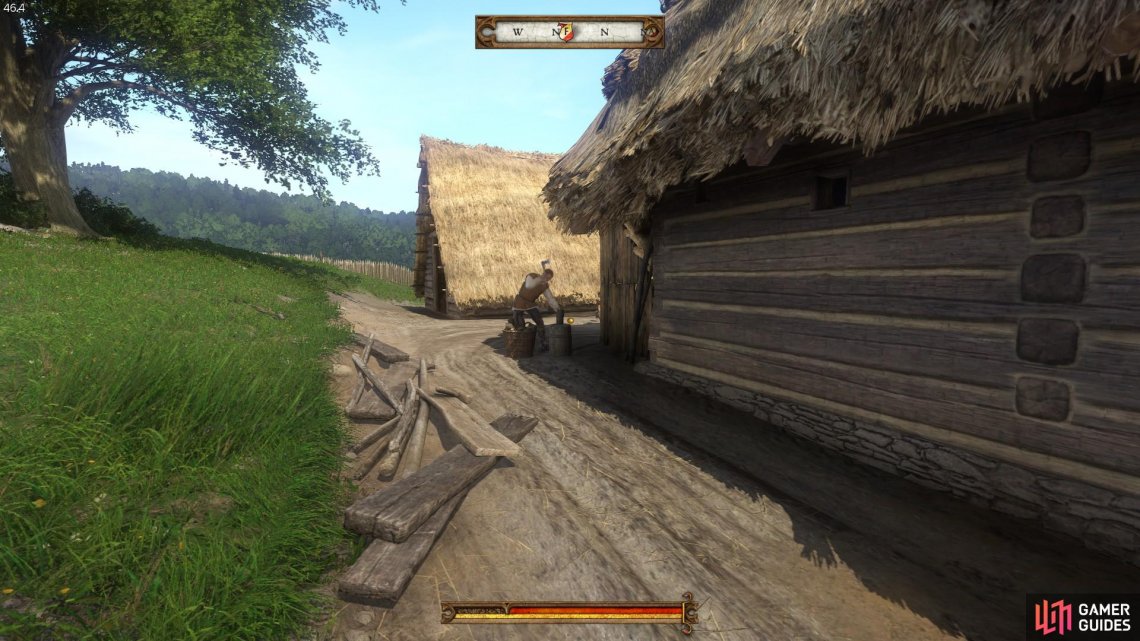 Speak to Kunesh about his debt to Henry’s father.

In speaking with Kunesh you will find that he is not an easy man to negotiate with: 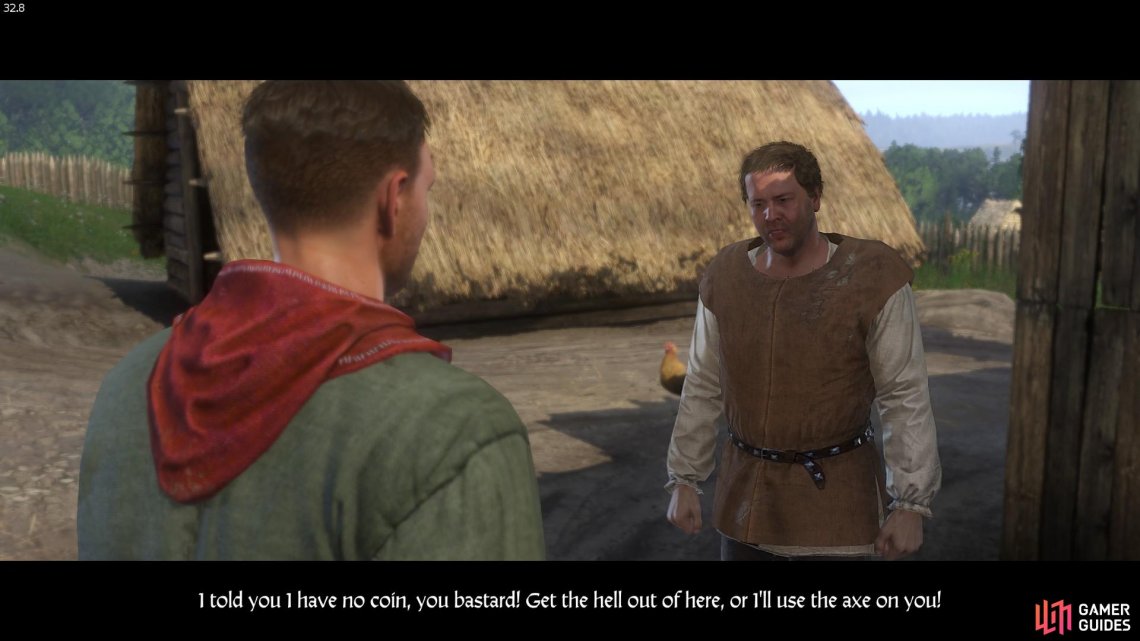 Kunesh is reluctant to pay the debt.

You will then have the option to attempt to persuade him or intimidate him. Whatever the choice, Kunesh is not easily persuaded or intimidated by a blacksmith’s apprentice, making a fist fight inevitable. The outcome of the fight will determine how you acquire the hammer, axe and something worth selling. If you succeed in the fight he will allow you to take the axe and give you the keys to his house, allowing you to open the chest in his house and take the hammer and nails within.

If you want to beat Kunesh in the fist fight there are four things to keep in mind. First, maintain your block stance at all times. Second, keep moving; do not let Kunesh corner you or find you as a sitting duck. Third, maintain your stamina; do not initiate hits while stamina is low, as you will become exposed and take damage when it is depleted. Fourth, keep to quick hooks rather than jabs, as the latter can slow you down significantly and leave you exposed to an incoming hit. 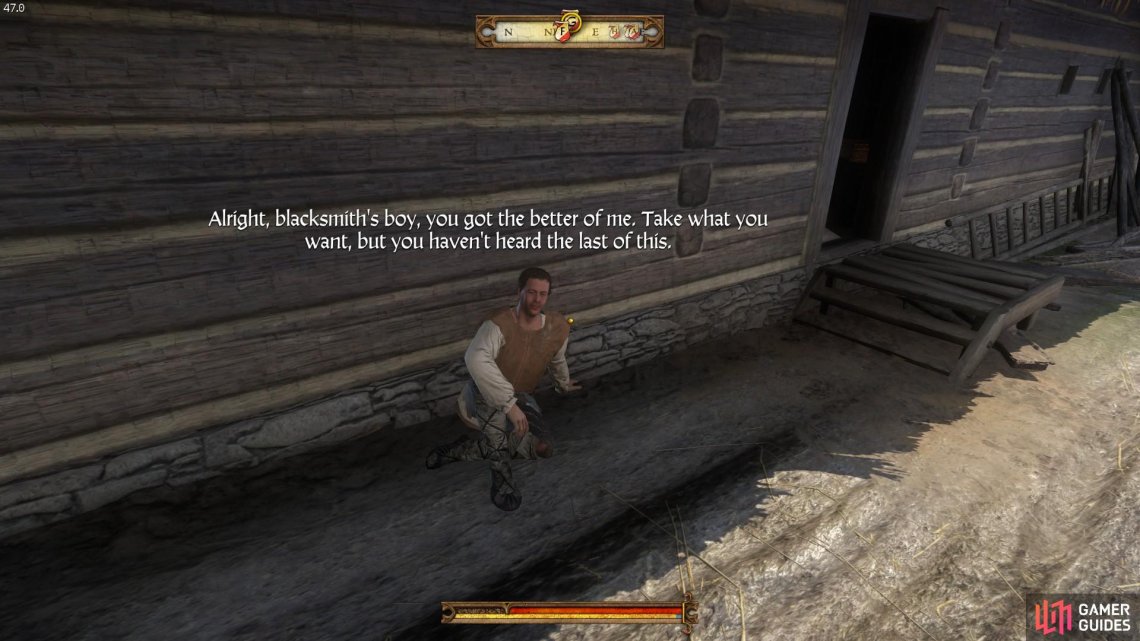 (1 of 2) You will have free access to Kunesh’s possessions if you beat him in the fist fight. 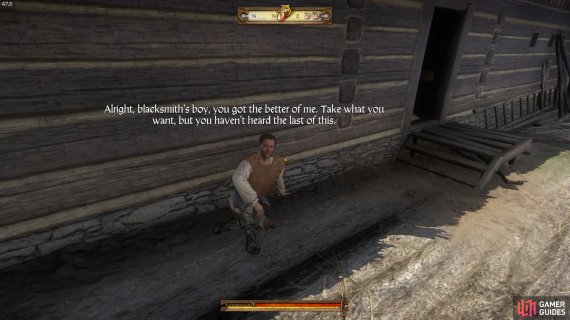 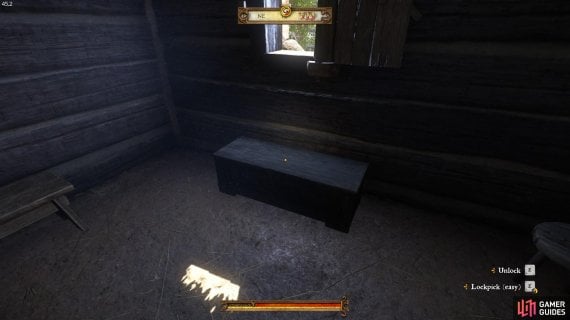 You will have free access to Kunesh’s possessions if you beat him in the fist fight. (left), The chest in Kunesh’s house containing the hammer and nails. (right)

If you fail to beat Kunesh in the fight, don’t worry. Henry’s mother will heal your wounds and you can wash yourself in the trough to remove any blood stains. You will have to acquire the items from Kunesh using alternative methods. To get the axe, wait until Kunesh leaves it in the stump while he goes around the house to collect more wood, enabling you to take it without him seeing. Without the key to the chest inside his house you will need lockpicks to open it. These can be acquired from Henry’s friend Fritz, who is at the tavern.

You will need to go to the tavern regardless of the outcome of the fight between Henry and Kunesh.

Arriving at the tavern will prompt a cutscene in which Henry’s friends are watching some of the locals discuss their views on the dethroned King Wenceslaus IV of Bohemia. One of the locals, a German named Deutsch, holds a disparaging view of Wenceslaus which Henry and his friends take offence to. As a result they plan to exact revenge by throwing dung at Deutsch’s house. Henry can choose not to partake in the dung throwing, but note that it is essential if you want his friends to help deal with Kunesh to get his key or to acquire the lockpicks from Fritz. 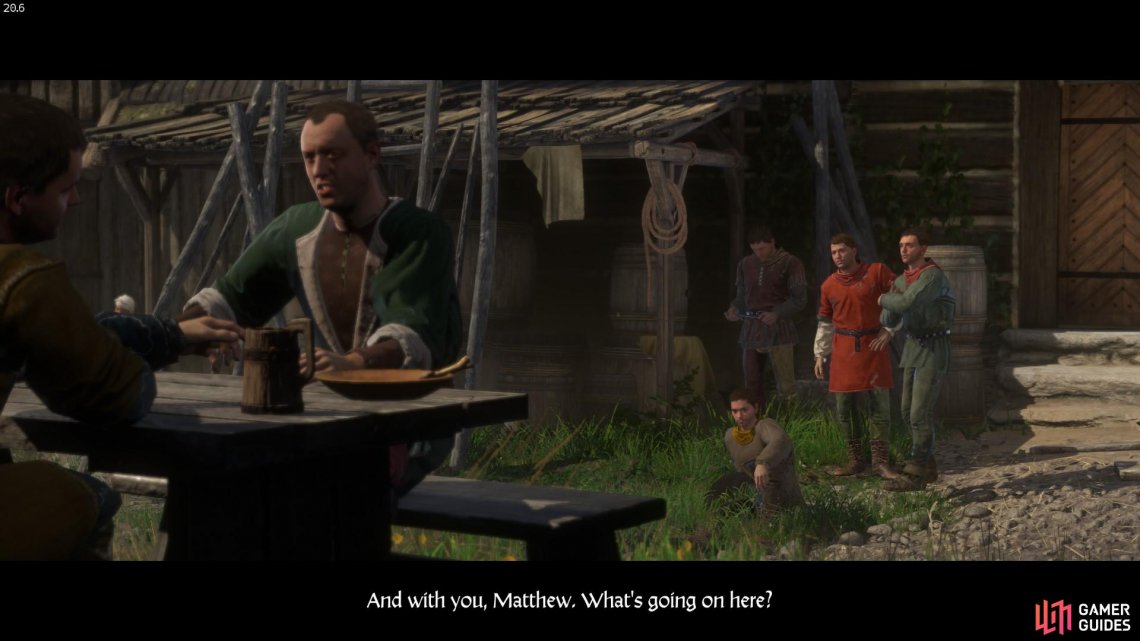 Henry and his friends listen to the locals discuss Wenceslaus at the tavern.

Once you have collected the axe, hammer and nails, take them back to Henry’s father to receive some Groschen (in-game currency) for the charcoal and ale. With Groschen in hand return to the market and speak to the charcoal burner, first on the right down from the path. Purchase ten pieces of charcoal and if you are feeling stingy haggle for a lower price. Having bought the charcoal, go back to the tavern to purchase some ale. You will find Henry’s girlfriend, Bianca, inside. After she gives you the ale she will tell you that Vanyek the Sword Master was asking about you. Before you go back to your father with the charcoal and ale, speak to Vanyek who is sat on a bench outside the tavern. 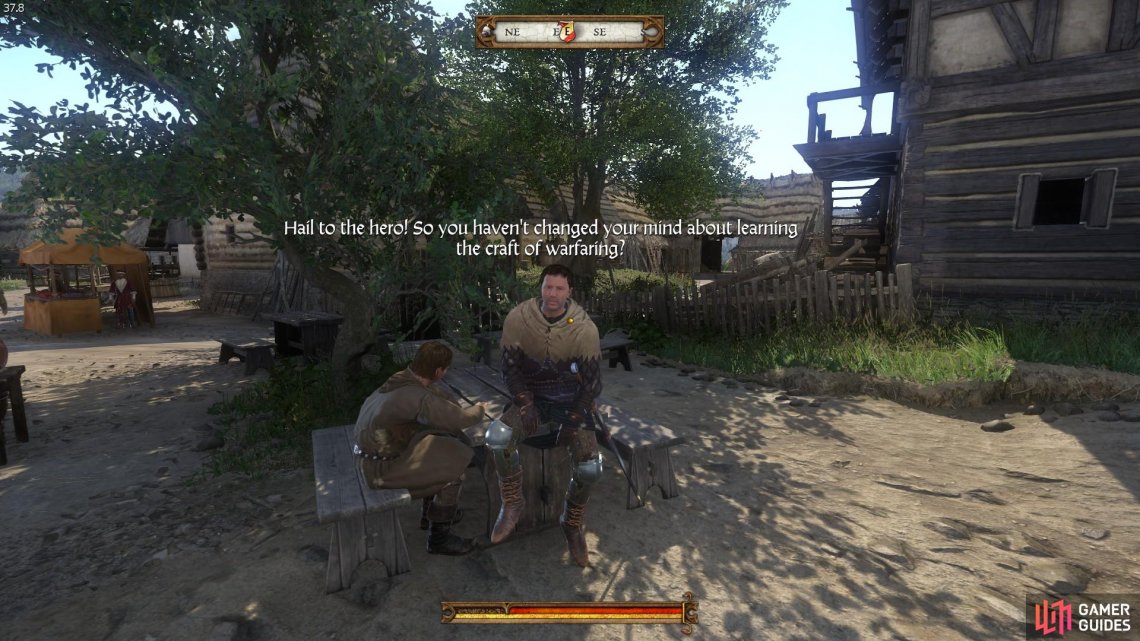 Speak to Vanyek to begin your sword fighting lesson.

Follow Vanyek to the combat arena and speak to him to begin the lesson. Go through the basics of movement, slashing, stabbing and chain strikes to advance your skill and knowledge. 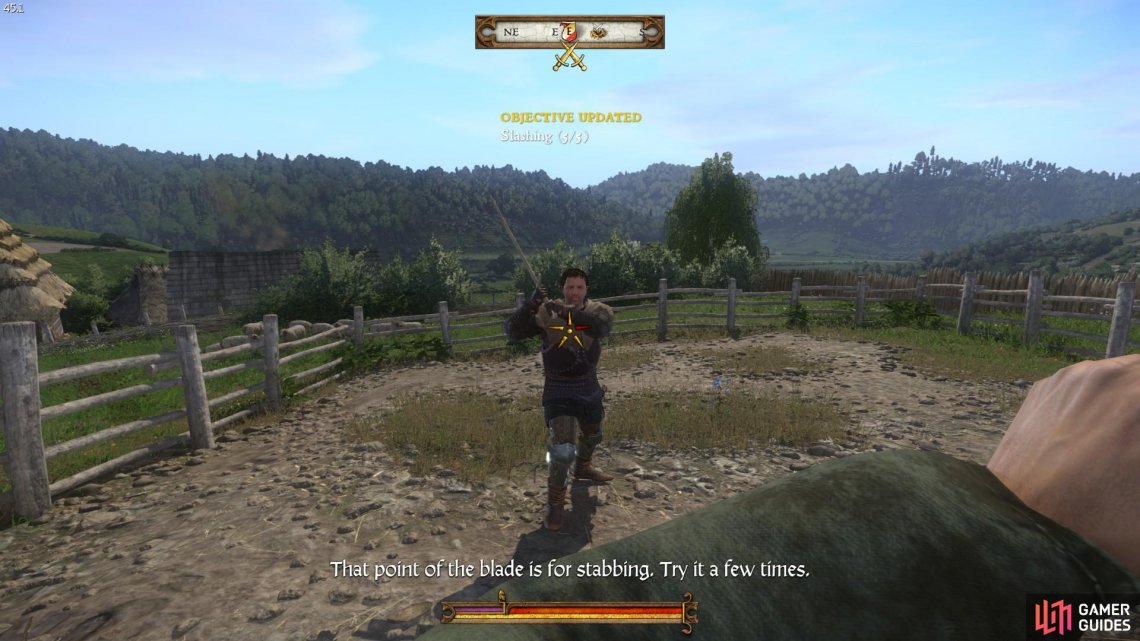 Follow Vanyek’s instructions to learn the basics of combat.

When you have completed the lesson with Vanyek go back to the forge to give the charcoal and ale to Henry’s father. A cutscene will follow in which Henry helps his father complete the craft of Sir Radzig’s new sword. 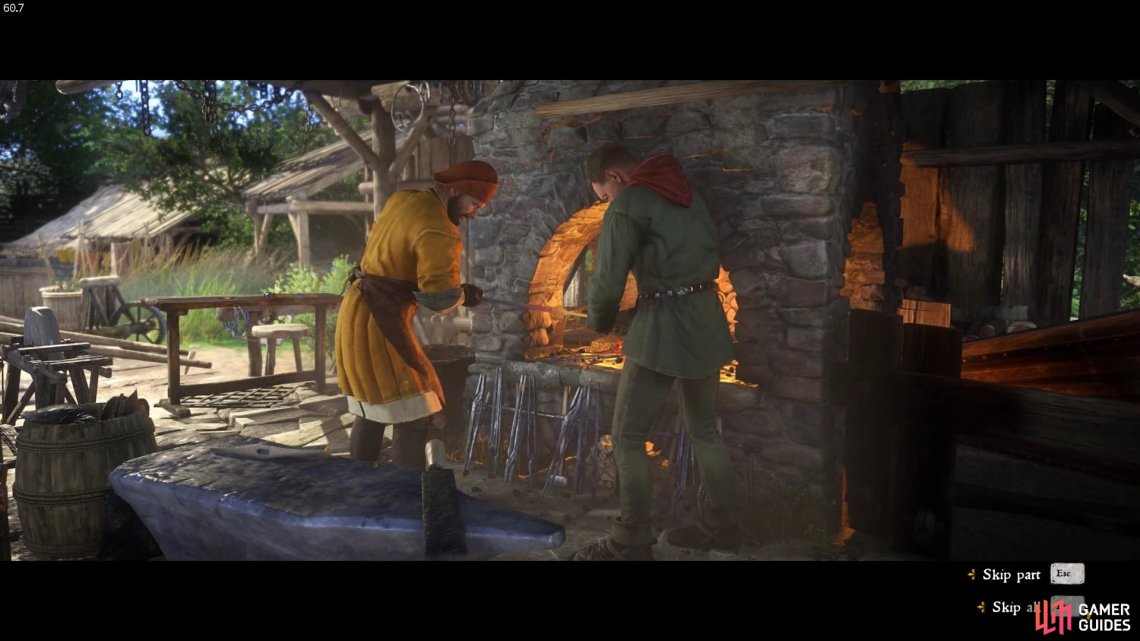 When the sword is complete a woman named Theresa will ask Henry’s father for some nails. Your last task of the chapter is to fetch the nails from the house (and everything else in the chest which will prove useful later) and bring them to Theresa. A cutscene will follow in which Sir Radzig admires the sword before Skalitz is suddenly attacked without warning by the forces of King Sigismund. Be ready to flee to Talmberg when the cutscene ends. 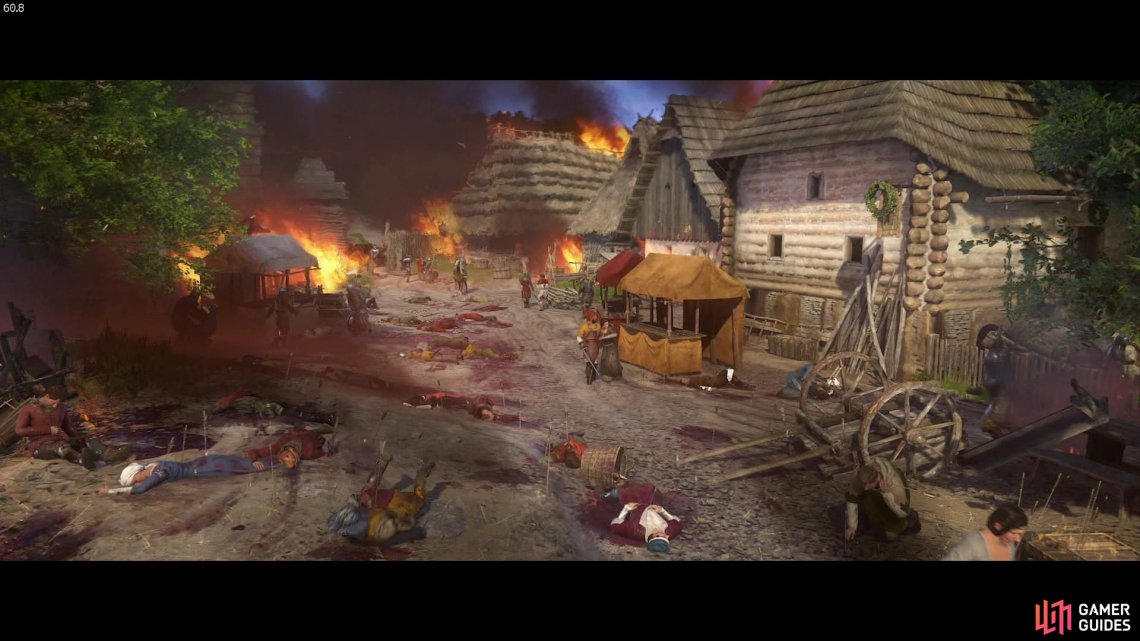